The development of peripheral T-cell lymphoma (PTCL) after chemotherapy for Hodgkin’s lymphoma (HL) is rare, and highly aggressive TCL/leukemia has not been reported to date. The relationship between HL and PTCL needs further exploration to understand the pathogenesis of metachronous lymphoma (ML) and find effective treatment options. We report a patient with ML, whose biopsy of a right cervical lymph node initially confirmed classical HL (CHL).

We report a patient with ML, whose biopsy of a right cervical lymph node initially confirmed CHL, with typical reed–sternberg cells expressing CD30 and PAX-5. T-cell leukemia/lymphoma occurred 3 years after treatment, and a lymph node biopsy at the onset confirmed PTCL, nonspecific type, expressing CD3, CD4 and CD8. The patient was treated with standard doses of chemotherapy, programmed cell death-ligand 1 monoclonal antibody, and chidamide, all of which failed to achieve complete remission. The patient was diagnosed with refractory state, and eventually died of leukocyte stasis.

The accuracy of the diagnosis needs to be confirmed when chemotherapeutic drugs are not effective.

Core Tip: We report a patient with metachronous lymphoma. The development of peripheral T-cell lymphoma (TCL) after chemotherapy for Hodgkin’s lymphoma is rare, and highly aggressive TCL/leukemia has not been reported to date. We reviewed the literature and discussed whether immunodeficiency and malignant transformation of reactive T-cells may be major factors contributing to the development of TCL/ leukemia.

In 1954, Custer first proposed the term composite lymphoma (CL) to describe a “lymphoma in which more than one histological form occurs in the patient”[1]. In 1982, the “Non-Hodgkin lymphoma Work Program” defined CL as “two completely different types of non-Hodgkin’s lymphoma (NHL) or, rarely, a combination of NHL and Hodgkin’s lymphoma (HL) in a single organ or tissue”. The two histological subtypes of CL include two different types of NHL or a combination of HL and NHL. Different combinations are named differently. When HL or NHL appears before the other, it is called metachronous lymphoma (ML), two histological forms of HL or NHL appearing together is referred to as synchronous lymphoma. However, CL refers to both histological types of synchronous lymphoma that occur in the same anatomical site[2]. In this article, we report a patient with ML, whose biopsy of a right cervical lymph node initially confirmed classical HL (CHL), with typical reed–sternberg (RS) cells expressing CD30 and PAX-5. T-cell leukemia (TCL)/lymphoma occurred 3 years after treatment, and a lymph node biopsy at the onset confirmed peripheral TCL (PTCL), nonspecific type, expressing CD3, CD4 and CD8. A bone marrow biopsy revealed abnormal T-cell proliferation (25.5%) and immunophenotyping. T-cell receptor variable (TCRV) β (1–24) subfamily analysis, and TCR beta (TCRβ) and gamma (TCRγ) gene rearrangement all confirmed a large number of malignant T-cell infiltrated in the bone marrow.

The patient was a 59-year-old man who presented with right neck swelling and was diagnosed with enlarged lymph nodes in March 2017.

The patient was diagnosed with enlarged lymph nodes in March 2017. Subsequent computed tomography scans confirmed the nodes at multiple sites (bilateral neck, axilla, and abdomen), with a maximum cervical lymph node of approximately 3.8 cm × 2.4 cm and an enlarged spleen of approximately 15 cm in diameter. The patient had no other feeling of discomfort.

Five years before the discovery of the enlarged lymph nodes he suffered from allergic purpura (simple skin type); however, the symptoms disappeared after treatment and did not recur.

He was a non-smoking non-drinking patient and had no history of other major diseases nor any significant family history of disease.

The rest of physical examination was normal.

After pathological diagnosis of CHL, the patient was given eight courses of ABVD [adriamycin 40 mg intravenous injection (iv) d1, 15; bleomycin 15 mg iv d1, 15; vincristine 4 mg iv d1, 15; dacarbazine 0.5 g iv d1 and 15]. The systemic lymph nodes and spleen shrank and he was classified as partial remission according to the response evaluation criteria for lymphoma[3]. After 6 mo, bone marrow and lymph node biopsies were re-evaluated and the diagnosis remained unchanged. Programmed cell death-ligand 1 (PD-1) monoclonal antibody (sugemalimab, 1200 mg iv q21d) was administered eight times, and was discontinued due to a significant decrease in platelets. The cervical lymph node lesion occurred in September 2020 and we excised both lymph nodes. The pathology showed diffuse consistent T-cells with abundant blood vessels, expressing CD3 (diffuse), CD4 (little) and CD8 (little), but not CD20, CD79α, CD56, PD-1, Bcl-6 or CD10; Ki67 index was 60%–70%, and EBER. The diagnosis was PTCL, nonspecific type (Figure 1). Because the peripheral blood lymphocytes were as high as 85.87 × 109/L, we considered the possibility of leukemia. Further cytomorphological testing was performed and a significantly higher percentage of lymphocytes (63%) could be seen in the bone marrow, with abundant atypical lymphocytes. Bone marrow biopsy with hematoxylin and eosin and periodic-acid–Schiff staining revealed proliferation of bone marrow with diffuse abnormal lymphocytes (Figure 2). Flow cytometry (FCM) was performed and the results were analyzed using CD45/side scattering gating procedure, with bone marrow immunophenotyping expressing CD3, CD2, CD5, TCRαβ and CD45RO (Figure 3), weakly expressing perforin, and no expression of CD7, CD4, CD8, CD10, CD30, CD57, CD16, CD56, CD19, CD20, TCRγβ, CD45RA, CD25, CD26, CD or GranzymeB. FCM detected 24 TCRVβ subfamilies, of which vβ14 was 91.55% (Table 1). A TCR cloning assay (Invivo Scribe Technologies, San Diego, CA, United States) was performed and a positive TCRβ and TCRγ gene rearrangement was detected by extracting total DNA from bone marrow mononuclear cells and PCR amplification of the target fragment (Figure 4). No abnormal chromosomal results. The diagnosis of TCL/leukemia was confirmed. He was treated with eight courses of cyclophosphamide, vincristine, adriamycin, dexamethasone, cisplatin and chidamide; all of which failed to achieve remission. 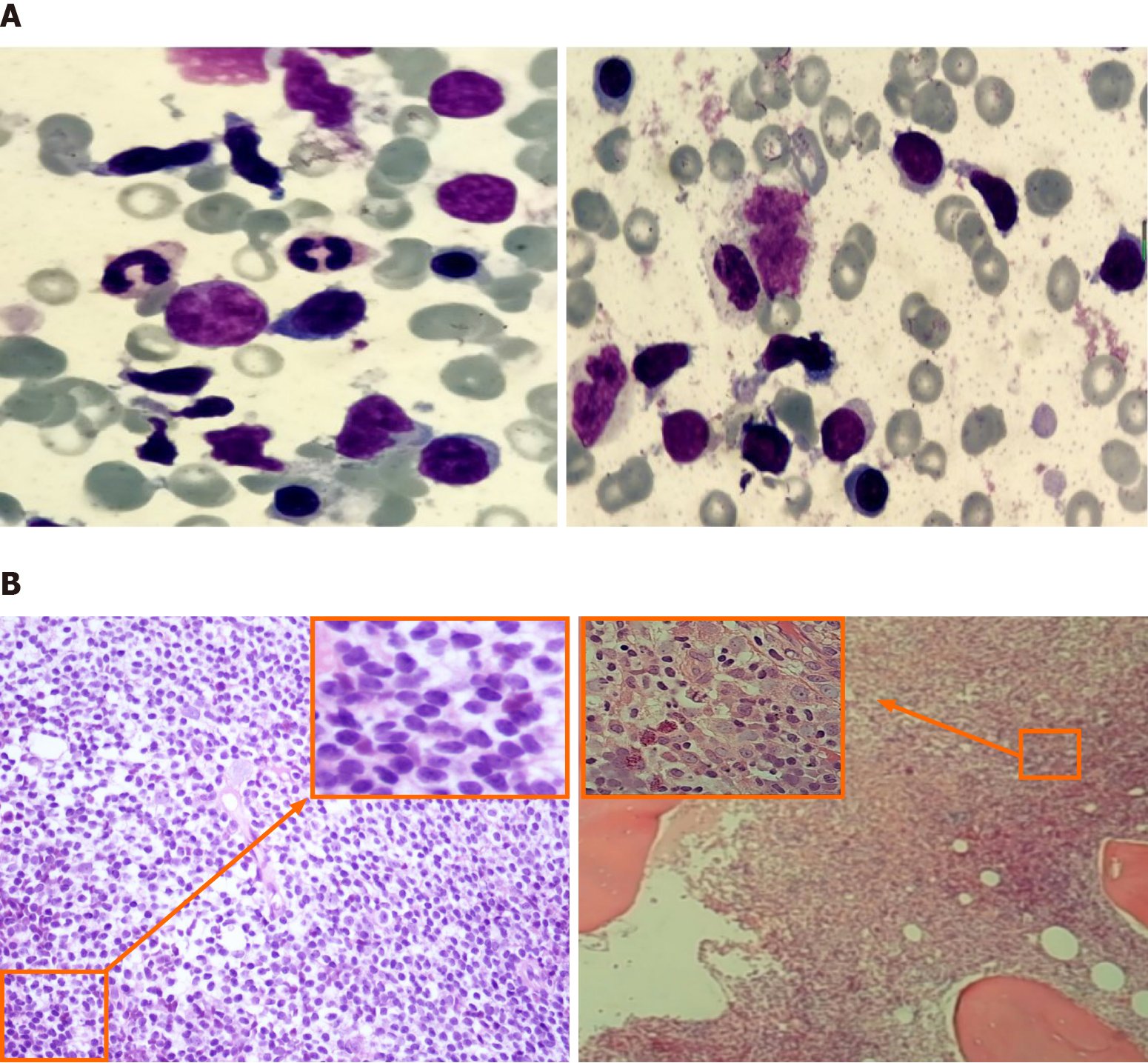 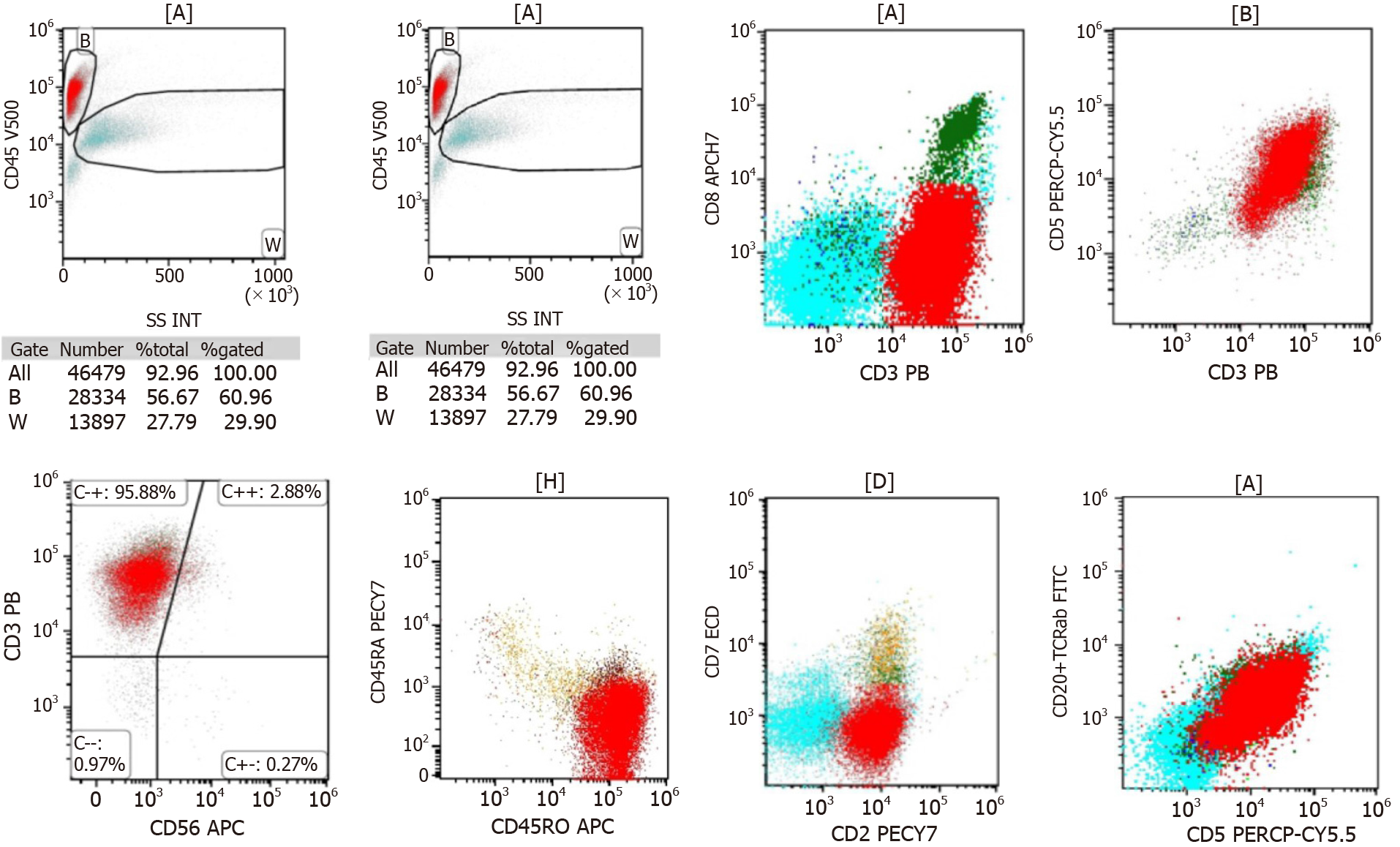 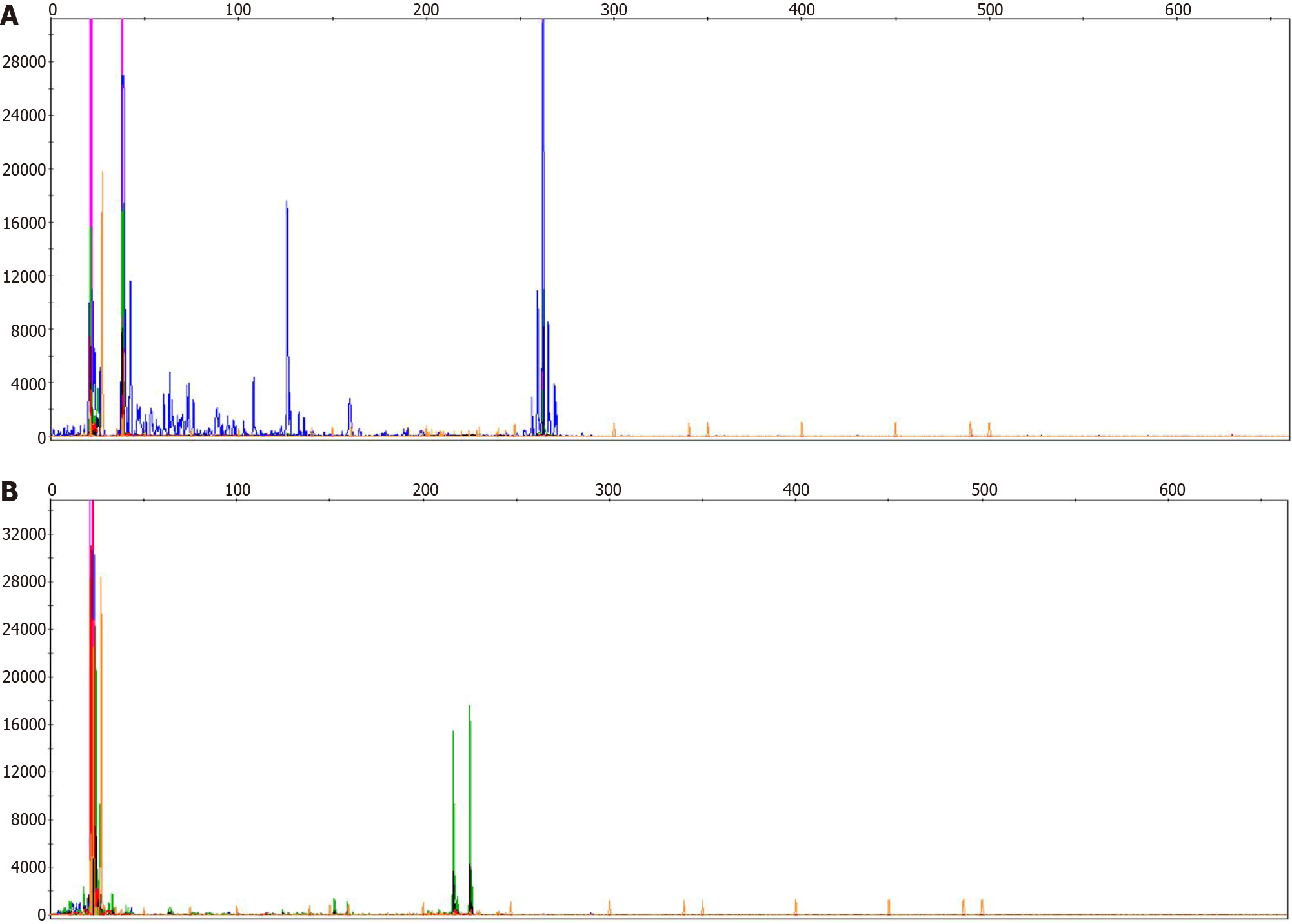 The patient was diagnosed with refractory state, and eventually died of leukocyte stasis syndrome.

Incongruent lymphoma is a rare solid tumor characterized by the appearance of two different types of lymphoma at different anatomic sites, which may manifest clinically as concurrent or sequential disease. ML refers to the appearance of either HL or NHL before the other. The appearance of B-cell lymphoma after CHL can be explained by the clonal progression of malignant B cells. Such more-aggressive and higher-grade B-cell lymphoma originates from RS cells in CHL, as RS cells are thought to originate from B-cells[4]. The reason for the presence of both B- and TCL at different anatomical sites is unclear and there are several explanations[5]. First, the presence of two unrelated clones leads to the presence of two different types of lymphomas. Second, the presence of a typical pluripotent tumor stem cells can differentiate into precursor cells containing both types of lymphoma. Third, secondary lymphomas are a transformation of primary lymphomas, and in clinical practice, it is more common for indolent lymphomas to transform into aggressive lymphomas.

Metachronous CHL and PTCL are uncommon in the literature, and the pathogenesis is difficult to explain. Overall, persistent immune dysregulation and chemotherapeutic injury are key factors for the occurrence of lymphoma, which may allow aggressive lesions in atypical lymphoproliferative disease. When CHL occurs, persistent immune dysregulation, chemotherapy induction, tumor biology, and RS cells can regulate T-cell growth by expressing multiple cytokines[6], and promoting the occurrence of PTCL in case of immunodeficiency and malignant transformation of cells.

The pathological substrate of HL is RS cells; some of which express abnormal T-cell antigens, as demonstrated by molecular studies with 15%–20% clonal TCR gene rearrangements[7]. Davis et al[8] reported a patient with HL and cutaneous TCL in 2014, which was confirmed by PCR as a single T-cell clone, suggesting that HL and TCL may originate from the same precursor material. A direct clonal relationship between HL and PTCL has rarely been examined, as only a few RS cells that express aberrant T-cell antigens have clonal TCR gene rearrangements and are of different T-cell lineages[9,10]. One hypothesis is that the immunosuppressive state of HL may promote the occurrence of secondary lymphomas, including PTCL. Another hypothesis is the malignant transformation of a pre-existing inflammatory T-cell population in patients with HL. Brown et al[11] studied a patient with metachronous HL and anaplastic large cell lymphoma, and suggested that the malignant transformation of T-cells originated from an oligoclonal population of reactive T-cells that developed through sustained clonal expansion. Oligoclonal T-cell expansion may arise from genetic alterations such as those caused by continuous stimulation of EBV and/or prior chemotherapeutic agents. Although EBV is a B-lymphotropic virus that does not infect the T-cell lineage in vivo as part of its natural life cycle, alterations in the immune microenvironment result in malignant transformation of inflammatory T-cells[12]. The possible mechanisms of metachronous B-cell lymphoma and TCL are shown in Figure 5.

Our patient was diagnosed with PTCL 3 years after the first lymph nodes were detected, but it could not be determined whether there was synchronous lymphoma at the time of the CHL diagnosis. We only obtained a lymph node biopsy of the neck, and after the appearance of secondary PTCL, we subjected a sample of the bone marrow collected at the beginning of the disease to FCM, which revealed some reactive T-cells. Furthermore, EBER+ RS cells at the beginning of the disease and EBER PTCL cells both supported the possibility of sequential occurrence of CHL and PTCL. Thus, the PTCL that emerged after CHL may have been due to chemotherapy-induced immunodeficiency. T-cell genetic damage, due to chemotherapeutic drugs, induced clonal proliferation and transformation into malignant cells, and EBV was involved in the alteration of the immune microenvironment, as demonstrated by EBER PTCL cells.

The occurrence of ML is rare and the diagnostic accuracy needs to be confirmed. We should be alerted to the occurrence of secondary lymphoma when chemotherapeutic drugs are not effective. In addition, the eight patients reported had a poor prognosis, short survival time, and high incidence of bone marrow infiltration (identified in three patients), as shown in Table 2. The patient we studied matched the diagnosis of TCL/leukemia, which has not been examined before. The staging and diagnosis of TCL are complex, and although our understanding of the molecular pathogenesis of TCL/leukemia cases is increasing, first-line therapies have not progressed proportionately, and the effectiveness of such treatments is limited. The relationship between HL and PTCL needs further exploration to understand the pathogenesis of metachronous T-cell NHL and find effective treatment options.