A 61-year-old man was admitted to our hospital in May 2020 because of a large, tender abdominal mass. Abdominal CT showed diffuse, irregular thickening of the gastric walls, with miliary and punctate calcifications. There were metastases to the perigastric and retroperitoneal lymph nodes and also peritoneal seeding. Histological examination of a specimen obtained by endoscopic biopsy showed poorly differentiated calcified signet-ring cell gastric cancer. The patient was clinically staged with T4N+M1 disease. He was treated with docetaxel, cisplatin, and fluorouracil as first-line therapy, irinotecan combined with S-1 as second-line chemotherapy, and programmed cell death protein 1 as third-line therapy. The patient underwent a total of nine cycles of chemotherapy. Follow-up CT scans every 3 mo showed continually increasing calcifications. As of this writing, the patient has survived almost 1 year.

In this case report, we describe the histopathological and imaging characteristics of a patient with gastric cancer receiving chemotherapy. Multiple punctate calcifications were seen, which gradually increased during chemotherapy. Several possible mechanisms for the calcifications are described, but further research is needed. Future findings may lead to new approaches for the evaluation and treatment of such tumors.

Core Tip: In this report we present a case of gastric mucinous adenocarcinoma with calcification in the gastric wall on computerized tomography evaluation before and after chemotherapy. We explain not only the different theory of the calcification formation and variety, but also the relationship of calcification with prognosis. We hope the results provide new thoughts on tumor evaluation and treatment in the future.

Gastric cancer is the fifth most common cancer worldwide and has recently become the third leading worldwide cause of cancer-related deaths[1]. Mucinous gastric carcinoma (MGC) is a rare histological subtype (3%) of gastric cancer. It is often characterized by substantial mucinous lakes within tumors[2]. Calcifications can be seen in tumors of the thyroid, thymus, pancreas, female reproductive system, and others[3-6]. However, calcifications are infrequent in gastric cancer, where they are seen in less than 3% of patients. Several investigators have reported that calcifications are characteristic computerized tomography (CT) features of patients with MGC, showing high specificity (98.7%) for the diagnosis of MGC[7]. In this report, we present serial CT and histopathological features of an advanced calcified signet-ring cell gastric cancer that responded to chemotherapy.

A 61-year-old man was admitted to our hospital in May 2020 because of a tender abdominal mass of increasing size.

The patient had had symptoms of anorexia and stomach pain for almost 1 year. He had lost about 10 kg of weight in the 3 mo before hospitalization.

The patient had suffered from hypertension for years.

No personal or family history was identified.

The carcinoembryonic antigen (CEA) and carbohydrate antigen 19-9 (Ca199) levels were positive at 12.41 ng/mL, and 196 U/mL, respectively. Serum calcium and phosphorus levels were within the normal ranges.

CT of the abdomen showed diffuse and irregular thickening of the gastric wall with miliary and punctate calcifications (Figure 1A). There were metastases to the perigastric and retroperitoneal lymph nodes and peritoneal seeding. Endoscopy and biopsy were performed. Endoscopy showed a protuberant lesion in the posterior wall at the junction of the gastric fundus and body near the cardia. Ulcerative lesions were seen on the side of the protuberant lesion, which extended downward along the anterior wall, lesser curvature, posterior gastric wall to the gastric antrum, and the anterior pylorus (Figure 2). Histologic examination of the specimen revealed a poorly differentiated mucinous adenocarcinoma with scattered signet-ring cells (Figure 3). Immunohistochemistry was positive for mutl homolog 1, postmeiotic segregation increased 2, mutl homolog 2, and mutl homolog 6, and negative for human epidermal growth factor receptor-2, Epstein Barr virus-encoded RNA, and programmed cell death protein ligand 1 expression. 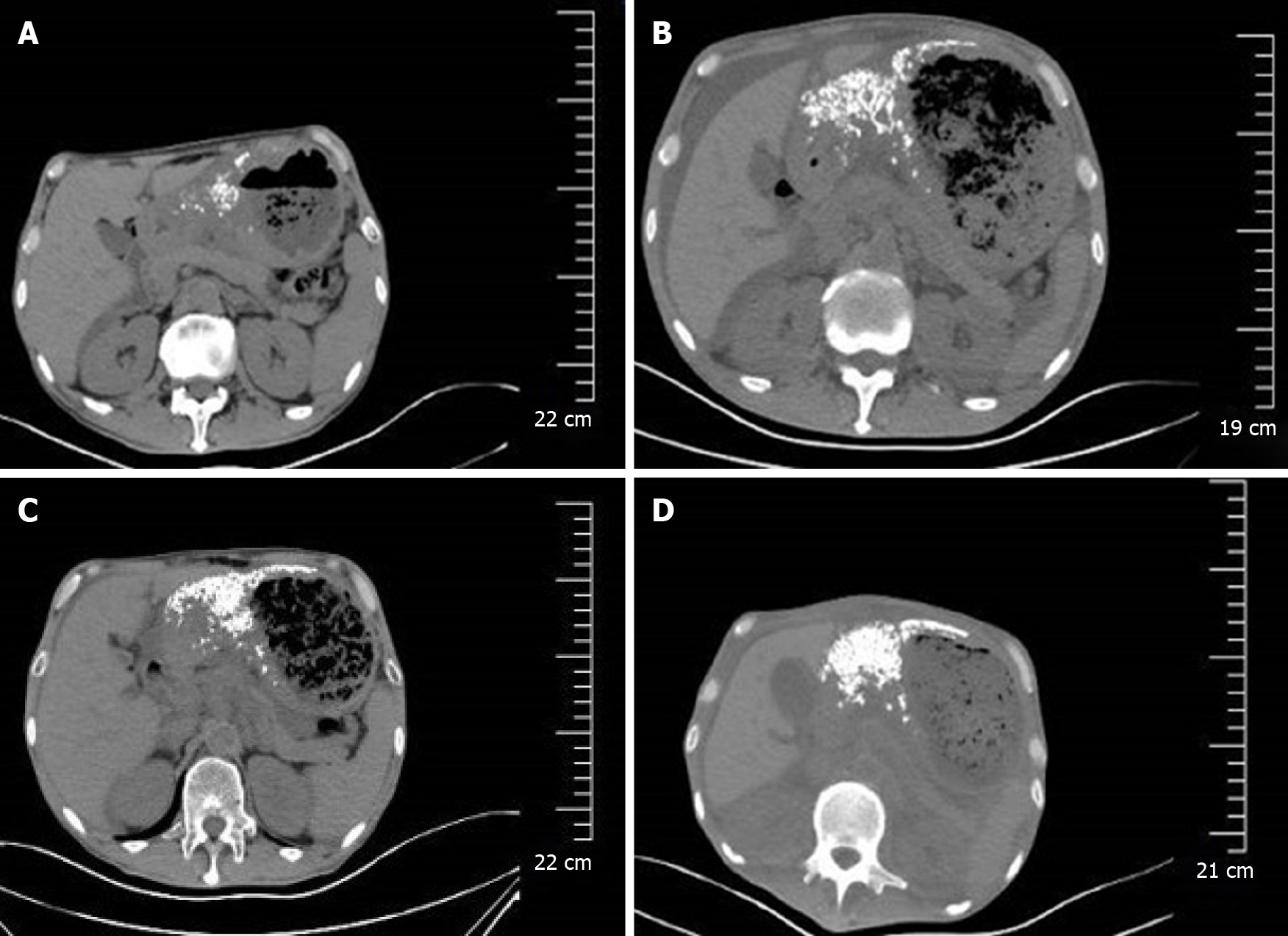 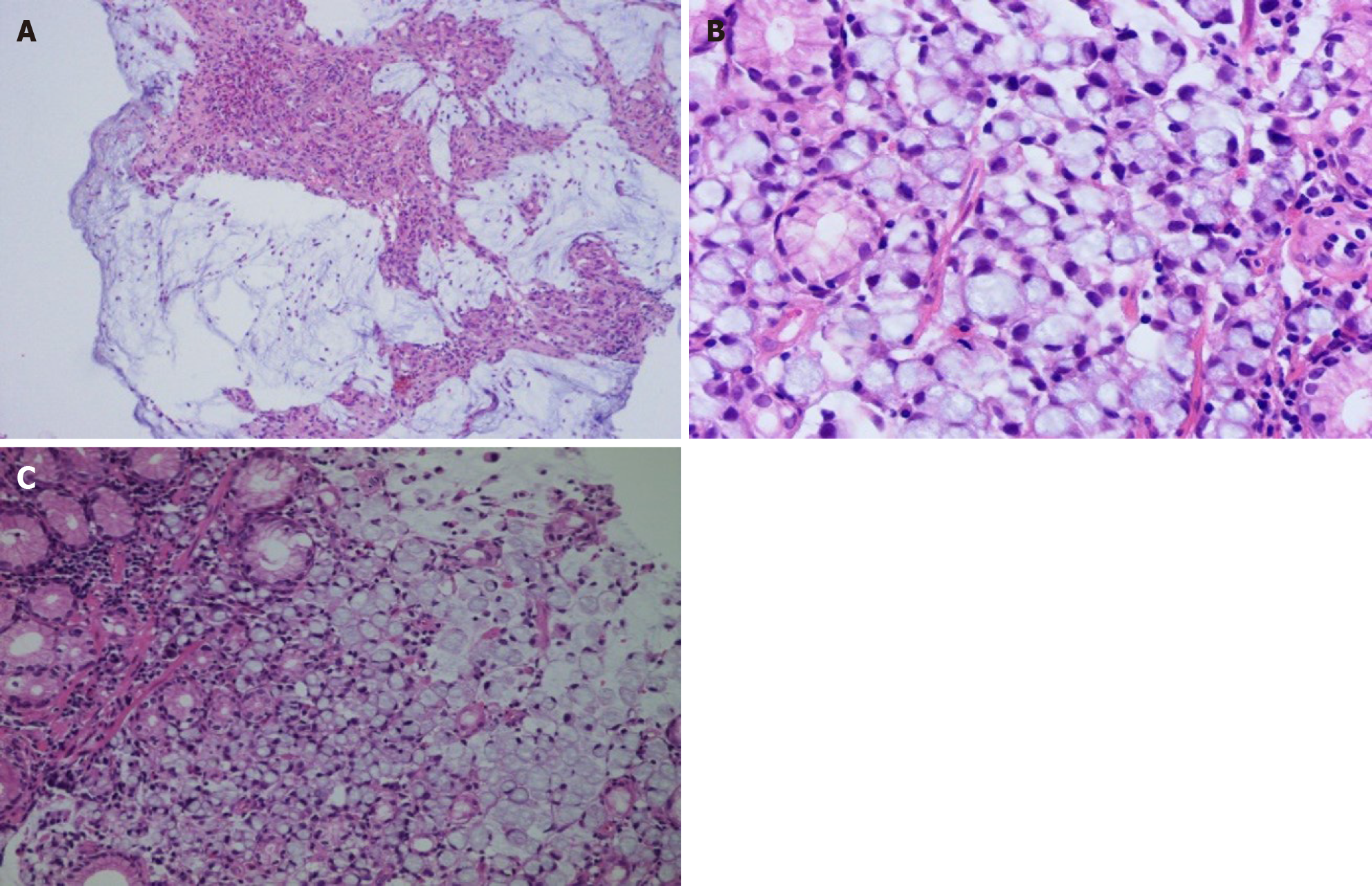 The final diagnosis of the case was poorly differentiated gastric mucinous adenocarcinoma with scattered signet-ring cells (stage IV). The patient was clinically staged to have T4N+M1 disease.

The patient received five cycles of docetaxel, cisplatin, and fluorouracil (DCF). The symptoms associated with the abdominal mass, including anorexia, were relieved. The levels of the CEA and Ca199 tumor markers decreased to 5.95 ng/mL and 87 U/mL, respectively. Abdominal CT showed reduced thickening of the gastric wall. However, in September, after five cycles of DCF chemotherapy, an abdominal CT showed increased thickening of the gastric wall and massive ascites. The patient underwent drainage of the ascites via abdominal puncture and second-line chemotherapy of irinotecan combined with S-1. After four cycles of chemotherapy, the patient's had condition progressed. The patient was started on programmed death-1 (PD1) immunotherapy in December 2020, which is ongoing.

As of this writing, the patient's condition is stable. Over the course of his treatment, the patient's general condition gradually improved, but abdominal CTs revealed progression of the calcifications of the gastric wall after chemotherapy (Figure 1).

MGC is a histological type of gastric carcinoma that is classified by the World Health Organization as a poorly differentiated type[12]. It is characterized as a gastric adenocarcinoma with a substantial amount of extracellular mucus (> 50% of tumor volume) within the tumor. Moreover, MGC seems to have a worse prognosis than non-MGC (nMGC), but the mucinous characteristic has not yet been proven to be an independent prognostic marker[13,14].

Calcification in gastric cancer was initially described in 1913 by Gruber et al[15] in Germany. Several other cases were subsequently reported[16-18]. As mentioned previously, calcification can occur in many different tumors, but it is rare in gastric cancer. When present, the tumor is usually proven to be MGC. Our patient was also diagnosed with MGC containing signet-ring cells. It has been reported that the prognosis may be better in patients with MGC and calcifications than in those having gastric cancer without calcification[19].

Based on differences in the pathogenesis, two types of calcification, dystrophic and metabolic, have been described. Dystrophic calcifications are local depositions of calcium salts in necrotic tissue in the presence of a normal serum calcium level. Metabolic calcifications often occur in disorders of mineral metabolism. Dystrophic calcifications are the most frequent in malignant and most benign tumors. Why do the calcifications occur? One theory is that calcification is a result of the degeneration of tumor cells. Factors such as biopsy, chemotherapy, and radiotherapy can lead to ischemia and necrosis. Insufficient blood flow leads to decrease of cellular respiration and carbon dioxide production, resulting in an alkaline environment. Calcium salts precipitate in alkaline solutions, and may be deposited in the necrotic tissue, forming foci of calcification[11]. The other theory is that various factors secreted from the tumor cells or other cells in the tumor microenvironment disturb local calcium metabolism. When calcium metabolism is enhanced, calcium salts gradually accumulate[20].

Calcifications were present in the lesion when the patient was first diagnosed. The calcifications gradually increased during chemotherapy. As mentioned previously, excessive tumor growth at the time of the initial diagnosis may lead to insufficient perfusion of some of the tumor cells, which results in ischemic necrosis. Mucinous adenocarcinomas may also secrete components that interfere with calcium metabolism. With ongoing chemotherapy, more tumor cells undergo ischemic necrosis, leading to increased calcification. The increased calcification may indicate that chemotherapy has been effective. Easson et al[21] reported that the presence of calcifications within a colorectal liver metastasis indicate a markedly improved prognosis. Burkill et al[22] reported that patients with noncalcified ovarian cancers survive longer than the patients with calcified tumors. However, in breast cancer, patients with decreased numbers of calcifications after neoadjuvant treatment had higher rates of complete pathological response compared with patients with no changes in calcification[23,24]. However, whether the degree of calcification is related to the response to chemotherapy and outcome remains unclear. Histological and statistical evidence from a large patient series is needed.

In conclusion, we reported a patient with mucinous gastric adenocarcinoma with signet-ring cell features and calcifications that increased over the course of his illness, both before and after chemotherapy. The increase in calcifications may indicate that the chemotherapy he received was effective and may imply a markedly improved prognosis. We postulated on the mechanisms causing the phenomenon, for which further investigations are needed.