Posterior reversible encephalopathy syndrome (PRES) manifests many neurological symptoms with typical features on neuroimaging studies and has various risk factors. Cyclophosphamide is one of the therapeutic agents for anti-neutrophil cytoplasmic antibody (ANCA)-associated vasculitis. Cyclophosphamide as the sole cause of PRES has been reported in only a few cases. Herein, we report a unique case of early-onset oral cyclophosphamide-induced PRES in a patient with ANCA-associated vasculitis.

A 73-year-old man was transferred to our hospital for sepsis due to acute cholangitis. He had already received hemodialysis for two weeks due to septic acute kidney injury. His azotemia was not improved after sepsis resolved and perinuclear-ANCA was positive. Kidney biopsy showed crescentic glomerulonephritis. Alveolar hemorrhage was observed on bronchoscopy. He was initially treated with intravenous methylprednisolone and plasma exchange for one week. And then, two days after adding oral cyclophosphamide, the patient developed generalized tonic-clonic seizures. We diagnosed PRES by Brain magnetic resonance imaging (MRI) and electroencephalography. Seizures were controlled with fosphenytoin 750 mg. Cyclophosphamide was suspected to be the cause of PRES and withdrawal. His mentality was recovered after seven days and brain MRI showed normal state after two weeks.

The present case shows the possibility of PRES induction due to short-term use of oral cyclophosphamide therapy. Physicians should carefully monitor neurologic symptoms after oral cyclophosphamide administration in elderly patients with underlying diseases like sepsis, renal failure and ANCA-associated vasculitis.

Core Tip: Posterior reversible encephalopathy syndrome (PRES) is a neurological disease that can occur suddenly during the clinical course of various disorders. Since the clinical course of PRES is reversible, it is important to diagnose it quickly and correct the cause. Cyclophosphamide has recently been reported as one of the causes of PRES. This is the first report that PRES occurred at the early onset of oral cyclophosphamide therapy. Physicians should carefully monitor neurologic symptoms after oral cyclophosphamide administration in elderly patients with underlying diseases like sepsis, renal failure, and anti-neutrophil cytoplasmic antibody-associated vasculitis.

A 73-year-old man was consulted to nephrology for persistent oliguric azotemia during admission to hepatology of our hospital.

He already started hemodialysis via right internal jugular vein long-term dialysis catheter at one month ago due to septic acute kidney injury with uremic symptoms and oliguria. His azotemia and oliguria were not improved after sepsis resolving and he was still receiving hemodialysis for one month.

He had received intravenous antibiotic therapy and endoscopic retrograde biliary drainage state for sepsis due to acute cholangitis and common biliary duct cancer for one month.

He denied taking any medications and past medical history except antibiotic therapy.

His blood pressure was 148/80 mmHg and he had both sides of pretibial pitting edema.

His initial blood urea nitrogen and serum creatinine (sCr) were 46.8 mg/dL and 5.33 mg/dL. But his sCr was 0.8 mg/dL at one month ago. His total protein, serum albumin and total cholesterol were 5.6 g/dL, 2.2 g/dL and 136 mg/dL, respectively. Urinalysis revealed proteinuria (+1) with a protein/creatinine ratio of 3.6 mg/mg and microscopic hematuria. Serologic tests for viral hepatitis were all negative, and serum immunologic tests were within normal range for C3 and C4 and negative for anti-nuclear antibody (Ab), anti-ds DNA Ab, immunoglobulin G, A, and M levels, cryoglobulin and anti-phospholipid Ab. However, the patient was positive for perinuclear-ANCA.

Kidney needle biopsy and bronchoscopy were performed due to clinically suspected RPGN. 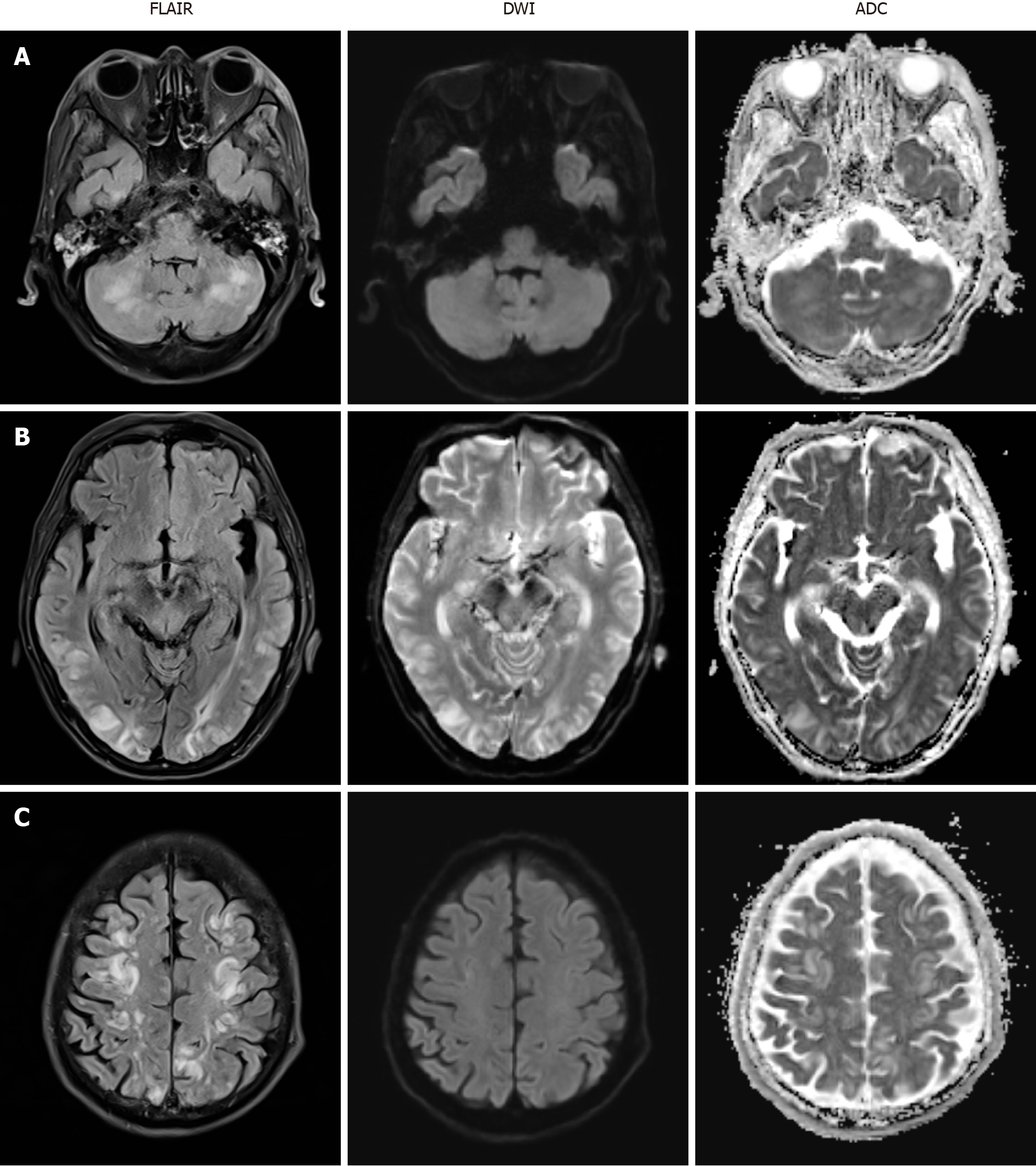 The final diagnosis of the presented case was cyclophosphamide-induced PRES.

We discussed the seizure management of this patient with the neurologist of our hospital. Seizure was controlled by administration of IV fosphenytoin 750 mg. IV methylprednisolone (30 mg/d) was continued but cyclophosphamide was discontinued due to the cause of PRES suspected.

Mental status fully recovered approximately seven days after the seizure attack. Follow-up brain MRI was performed two weeks after PRES onset and the images indicated that the disseminated enhancing lesions on T2 FLAIR had resolved (Figure 2) and the patient had no neurologic symptoms at this time.

After 10 d of seizure, oliguria was resolved and sCr recovered to 3.98 mg/dL. Hemodialysis was discontinued and the patient was discharged from the hospital with oral prednisolone. His clinical course was shown in Figure 3.

After follow-up for 4 mo at an outpatient clinic, he was treated with a maintenance dose of oral methylprednisolone (10 mg/day) with gradual tapering. His renal function was maintained at stable chronic kidney disease stage G4A2 (sCr, 2.41 mg/dL; eGFR by CKD-EPI, 25 mL/min per 1.73 m2; urine protein/creatinine ratio, 0.3 mg/mg). He has not relapsed any other neurologic symptoms.

PRES is a clinico-radiographic syndrome of varying etiology that was first described in a 1996 case series. The pathophysiology of PRES is a breakdown of cerebral autoregulation due to hypertensive encephalopathy, leading to disruption of the blood-brain barrier with fluid transudation and hemorrhage. Origins of PRES are diverse and often include hypertensive encephalopathy, renal failure, sepsis, vasculitis, autoimmune diseases, immunosuppressive agents and cytotoxic drugs[1,2].

Several mechanisms are suggested as the cause of PRES in these patients. First is sudden hypertension because high blood pressure was reported in seven of nine PRES cases (Table 1). Hypertensive episodes or blood pressure fluctuations above the upper limit of autoregulation lead to cerebral hyperperfusion and cause vascular leakage and vasogenic edema. The posterior cerebrum areas appear particularly susceptible to blood circulation changes. Second is endothelial dysfunction caused by endogenous or exogenous toxins from cytotoxic substances, eclampsia, sepsis or autoimmune disorders. Immunologic reactions may trigger endothelial activation due to excessive cytokine release followed by vascular leakage of proteins and fluid into the interstitium[1,2]. PRES associated ANCA-associated vasculitis itself has been reported, too and PRES was resolved after steroid pulse therapy[12]. Third is renal failure that all RPGN patients have. Renal dysfunction has been reported in half of all patients with PRES[13]. In patients with renal failure, administration of cyclophosphamide and decreased plasma clearance apparently result in increased systemic drug exposure and enhanced toxicity[14]. However, cyclophosphamide metabolite pharmacokinetics does not explain the occurrence of PRES because the metabolites cannot easily cross the blood-brain barrier, although they do have cytotoxic properties[15]. Therefore, whether accompanying renal dysfunction is the primary cause of PRES remains unclear.

When this patient was diagnosed with PRES, he had some risk factors such as immunosuppressive therapy, abrupt hypertension at the onset of seizure, azotemia, sepsis, ANCA-associated vasculitis as autoimmune disease and renal failure. However, seizures might not be the result but the cause of high blood pressure in this patient because his blood pressure was well controlled before seizure. His uremic symptoms and azotemia were also stable by regular hemodialysis for one month even though it was not normal. Both sepsis and vasculitis may cause damage to vascular endothelial cells to varying degrees. But his cholangitis was nearly improving state after antibiotic medication for six weeks at the time of seizure attack. And the activity of vasculitis was controlled by steroid pulse therapy and plasma exchange for one week. So, we could rule out the sepsis and vasculitis as the cause of PRES. We suspected the cyclophosphamide as the cause of PRES in this patient even though short-term use of oral cyclophosphamide. Seizure with loss of consciousness spontaneously resolved after cyclophosphamide withdrawal. We suggest that the contributing factors of early onset of oral cyclophosphamide-induced PRES is his severe azotemia, old age and underlying disease of sepsis and ANCA-associated vasculitis.

The authors thank the patient for his support.