Minimal deviation adenocarcinoma is a rare malignancy with a high rate of misdiagnosis and high aggressiveness, and its diagnosis relies on histopathology. Surgical resection is the preferred and most effective treatment, but the outcomes are often unsatisfactory.

Patients with minimal deviation adenocarcinoma have a lower survival rate than patients with conventional human papillomavirus-related cervical adenocarcinoma. A precise preoperative pathologic diagnosis may reduce the mortality rate due to missed optimal treatment with multiple surgical interventions. To date, there is no therapeutic consensus; therefore, each case must be treated individually.

Core Tip: Minimal deviation adenocarcinomas of the uterine cervix are mucinous adenocarcinomas not related to human papillomavirus. They are relatively rare, with atypical clinical presentation, low positive rate under cytology and pathological biopsy, high rate of misdiagnosis, high aggressiveness, and tendency to spread easily during the early stage. The methylation test also improves the specificity and sensitivity of early diagnosis of minimal deviation adenocarcinoma of the cervix.

However, it has been reported to be associated with Peutz-Jeghers syndrome (10%) and other ovarian tumors such as mucinous or sex cord tumors. The most common clinical features include serous vaginal discharge (69.4%), spotting, and post-coital bleeding (50%). Pelvic pain was uncommon, but cervical hypertrophy was present in 74.9% of cases[1]. The diagnosis of minimal deviation adenocarcinomas is difficult because of the lack of specific clinical manifestations and benign pathology, and it needs to be differentiated from benign tumors.

The patient had been menopausal for 7 years, with a free previous medical history.

Positron emission tomography/computed tomography (PET-CT) (Figure 1) showed that the uterus was enlarged with cystic, stable occupancy. MRI (Figure 2) suggested fluid in the uterine cavity and a cervical lesion occupying the cervical niche, which was considered a neoplastic lesion, predisposing to cervical cancer.

On May 26, 2020, the level of tumor marker CA-199 was 3287.19 U/mL, an E6E7 test was negative, and thinprep cytologic test revealed negative intraepithelial lesion or malignancy. A colposcopy (Figure 3A) on May 28, 2020 suggested cervical inflammation. Further cervical biopsy + pathology (Figure 3B) indicated (cervical 6 o’clock distal) tissue chronic inflammation, bleeding tissue in the uterine cavity with a small amount of mucus epithelium detected in the tissue, chronic inflammation of the tissues of the cervical canal, and significant glandular hyperplasia with hyaline cell mucus papillomatosis. Immunohistochemistry showed the following: CEA (-), P16 (-), NapsinA (-), Ki-67 (+) (< 5%), and HNF-1b (+). On June 2, 2020, the patient underwent loop electrosurgical excision procedure, with an intraoperative resection depth of 3-3.5 cm, and pathological inflammation of the cervix was observed. A PAX1 gene methylation assay performed on cervical exfoliated cells showed the following results: ΔCp = 3.57, indicating that the gene was highly methylated. 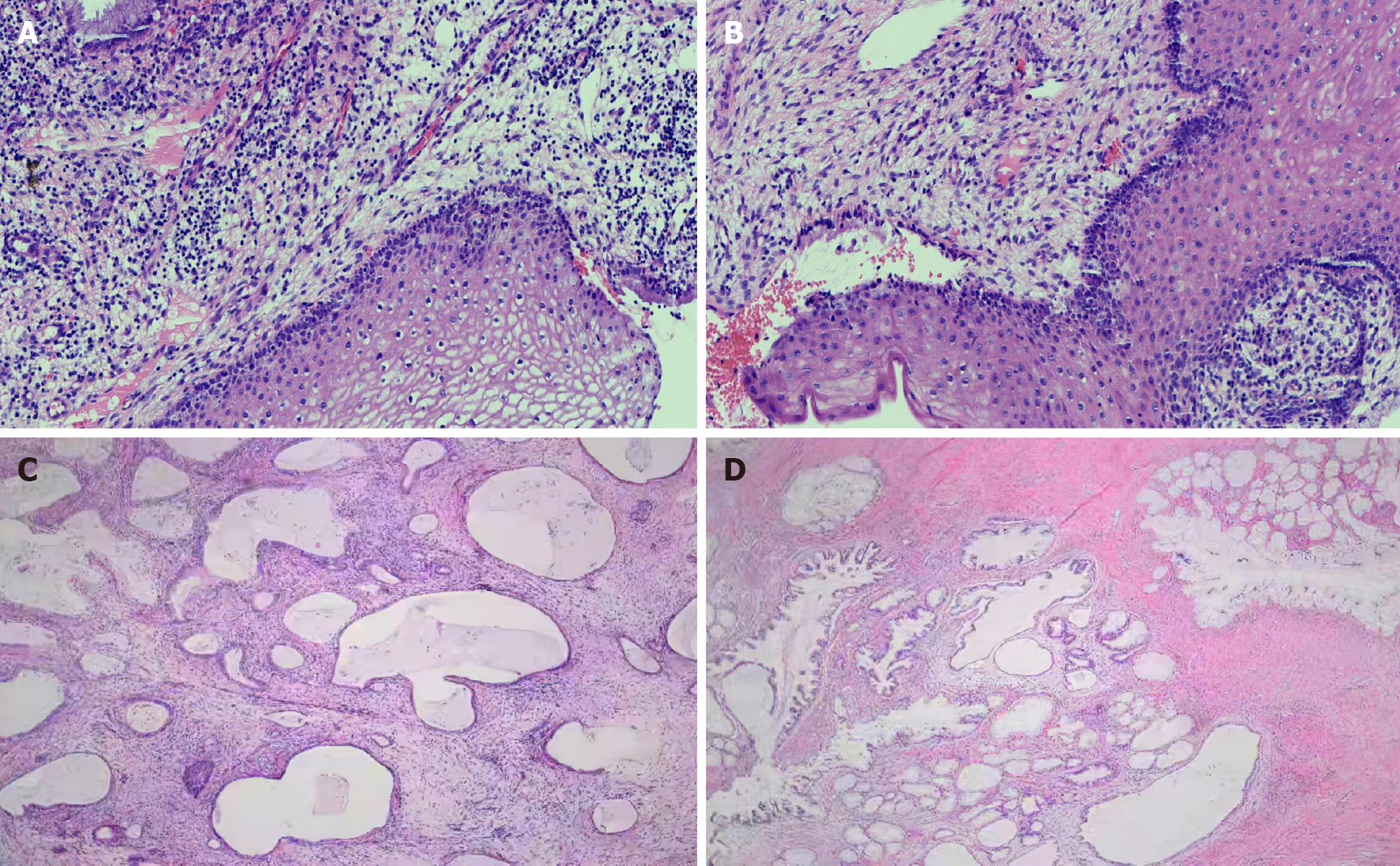 The final diagnosis of the presented case was uterine minimal deviation adenocarcinoma.

Since MRI, methylation, and CA19-9 suggested malignant lesions, hysterectomy was performed first, and the next surgical treatment was performed according to the results of intraoperative rapid pathological examination.

Hysterectomy was performed on July 6, 2020, and the uterus was observed anteriorly and found to be slightly smaller than average, regular in shape, with a smooth surface, no abnormalities in bilateral adnexa, a thickened and hardened cervix, and no abnormalities in sacral ligaments detectable upon palpation. Intraoperative rapid pathology considered uterine cervical adenocarcinoma, and minimal deviation adenocarcinoma was not ruled out. The patient underwent further surgical treatment. Then transabdominal extensive hysterectomy + double adnexal resection + pelvic lymph node dissection + abdominal para-aortic lymph node biopsy was performed.

The final pathologic diagnosis (Figure 3C and D) was stage IB2 minimal deviation adenocarcinoma. The patient was given treatment with postoperative radiotherapy and chemotherapy. There is no recurrence at present.

Minimal deviation adenocarcinoma of the cervix (MDA), accounting for 1%-3% of all cervical adenocarcinomas and 0.15%-0.45% of all cervical cancers, is a highly differentiated type of mucinous adenocarcinoma[2]. The average age of onset of MDA is 45 years. It is highly aggressive, but the clinical symptoms are atypical and readily missed and misdiagnosed in the early stage. Most of the patients are already in the middle and late stages upon diagnosis, so prognosis is poor[3].

However, MDA shows a typical deep infiltration, random distribution, and structural abnormalities, with some glands showing distinct malignant cellular features with interstitial tissue proliferation. P16 negativity in immunohistochemistry is an essential feature of MDA, suggesting no correlation with HPV infection or with the estrogen receptor[5].

Itoh et al[6] reported that MRI shows the most typical features of the disease among ultrasound, CT, MRI, and other forms of imaging, so MRI is preferred. MDA tissue is highly differentiated, and PET-CT only suggests non-specific signs such as increased cervical volume, cervical redundancy, and abnormal cervical echogenicity, with slightly increased marginal metabolism, which has limited diagnostic value[7]. T2-weighted MRI showed localized polycystic appearance of the MDA, fluid in the uterine cavity, disorderly arrangement of glands, and invasion of the cervical canal wall. In this case, only MRI produced positive results on imaging[8].

The methylation test provides an essential basis for the clinical diagnosis of this case. Recent studies have shown that DNA methylation is closely related to the occurrence of cervical cancer and can be used as a significant molecular marker for cervical cancer screening[9]. At present, many methylation test samples come from cervical cytology, which can avoid the influence of the stromal cells contained in the histological assay on the results. CpG island hypermethylation of tumor suppressor genes was found in cervical cancer patients and did not correlate with the degree of HPV infection[10]. This case was tested for methylation of the PAX1 gene, which is a crucial tumor suppressor gene. Lai et al[11] found PAX1 to be 94.4% highly methylated in cervical cancer tissues. In a subsequent study, they discovered that PAX1 methylation had a sensitivity of 78% and a specificity of 91% for the detection of CIN3+. PAX1 methylation provides a digital assay (ΔCp), which can be used to accurately determine whether cervical tissues are carcinogenic or not, based on the ΔCp of the PAX1 methylation assay and the extent of cancer. In 2016, Lai et al proposed using HPV testing as a primary screen. Many HPV-positive patients were tested for PAX1 methylation to identify actual high-grade lesions, assess whether they should undergo vaginal microscopy, and allay their fears[12,13].

There are few reports about the diagnosis and treatment of MDA. Considering that its molecular biological characteristics (easiness to infiltration, early metastasis and diffusion, and insensitivity to chemoradiotherapy), surgery is the best choice. It is recommended to perform transabdominal hysterectomy + pelvic lymphadenectomy, and adjuvant chemoradiotherapy should be carried out according to whether there are high-risk factors after surgery.

All in all, with the popularity of screening for HPV-related cervical lesions and the wide vaccination of HPV vaccines, the incidence rate of non-HPV-related tumors (such as MDA) may increase. In this patient, PET-CT failed to show its advantage in the diagnosis of malignant tumors, which may be due to less blood perfusion and weak marginal metabolism at the lesion site, but MRI examination could clearly indicate the lesion. Our research showed that for patients with vaginal discharge but negative cytological examination, we should be alert to the possibility of MDA. Deep biopsy or conization should be performed when necessary, combined with auxiliary examination techniques (such as MRI, immunohistochemistry, and methylation) to provide a basis for MDA diagnosis.

The methylation test improves the specificity and sensitivity of early diagnosis of MDA, facilitates early treatment, and positively improves the prognosis.