A 49-year-old man with type 2 diabetes was admitted due to numbness and weakness for 6 mo with progressive aggravation for 2 wk. His complete blood count, serum electrolytes, renal and liver function parameters were within the normal range. MRI showed mass lesions in the brainstem, with unusually inhomogeneous signal intensity after contrast-enhanced scans. His symptoms worsened after hypoglycemic therapy. Due to his clinical history and examination results, CPM was considered the most likely diagnosis. Treatment with corticosteroids was administered with a methylprednisolone pulse in the acute phase followed by dose tapering. During the 8-mo follow-up period, his clinical symptoms and imaging features significantly improved.

Diabetes could rarely be accompanied by CPM, and patients who experience this neurological complication could benefit from corticosteroid treatment. Clinicians should recognize the special relationship between diabetes and CPM, and improve awareness of early identification and appropriate treatment.

Core Tip: Central pontine myelinolysis (CPM) usually occurs during rapid correction of serum osmolality. We describe a 49-year-old man with type 2 diabetes who developed CPM without a history of hyponatremia or other common causes. Lesions in his brainstem showed atypical glioma-like inhomogeneous signal intensity on contrast-enhanced magnetic resonance imaging. He recovered after methylprednisolone pulse therapy in the acute phase and subsequent dose tapering. Our patient revealed an unusual cause and imaging presentation of CPM, implying the benefits of corticosteroid therapy to outcomes. Thus, it might be helpful for clinicians on diagnostic and therapeutic decision in the future.

Central pontine myelinolysis (CPM) is a neurological disorder that frequently occurs after rapid correction of hyponatremia. It was first described as a disorder associated with alcoholics and malnutrition in 1959 by Adams et al[1], and was later known as osmotic demyelination syndrome[2]. The pathophysiology of CPM is not completely understood. Currently, CPM is considered a concentrated, frequently symmetric, non-inflammatory demyelination within the central basis pontis. Other regions including the cerebral hemispheres, thalamus, basal nuclei, and cerebellum could also be affected, which is called ‘extrapontine myelinolysis’[3]. Following too rapid correction of hyponatremia with intravenous fluids, the extracellular tonicity increases dramatically, while the intracellular osmoles fail to change in time, and water is then driven out of the brain cells. As a result, cellular edema develops with dysfunction of water regulation. The fiber tracts in these susceptible regions contain abundant compact white and gray matter which are compressed and further induce demyelination[3,4]. The lesions are frequently demonstrated as hypointense on T1-weighted imaging (T1WI), hyperintense on T2-weighted imaging (T2WI)/ fluid-attenuated inversion recovery (FLAIR), hyperintense on diffusion weighted imaging (DWI), and isointense or hypointense on apparent diffusion coefficient (ADC), yet with no abnormal enhanced signal. The regions appear as a classic-trident-shaped area. Prophylactic and supportive treatments predominate, without evidence of efficacy of adjunctive corticosteroid therapy[4]. Herein we describe a case of CPM caused by type 2 diabetes, showing glioma-like inhomogeneous signal intensity on contrast-enhanced magnetic resonance imaging (MRI). Methylprednisolone pulse therapy in the acute phase was followed by dose tapering, which improved the patient’s clinical outcome.

A 49-year-old Chinese man was referred to our hospital due to chronic onset of numbness and weakness of the lower limbs for 6 mo, progressively worsening with abasia, blurred vision, and speech disorder for more than 2 wk.

The patient developed blurred vision and slight dysarthria after a 2-wk period of treatment for diabetes, corresponding to lesions in the brainstem were subsequently demonstrated on MRI. For further diagnosis and treatment, he was transferred to the emergency intensive care unit in Hangzhou Hospital of Traditional Chinese Medicine on June 8, 2020. At that time, he developed urinary retention and underwent indwelling catheterization.

Two weeks earlier, he was admitted to the local hospital due to big toe gangrene of his right foot associated with apparent thirst and urorrhagia. Initial laboratory examinations found an extremely high serum glucose (GLU) level of 450 mg/dL with a normal range of electrolytes, hematological parameters and biochemical markers of hepatic and renal function. Considering further possible examinations, as well as his unremarkable medical history, negative personal and family history, he was then diagnosed with type 2 diabetes. Treatment including hypoglycemic therapy [intravenous regular insulin (0.1 U/kg) and subcutaneous biphasic insulin aspart after which GLU was controlled in the normal range], toe amputation, and other symptomatic supportive therapies were underwent.

The patient had no previous medical history.

Blood and biochemical evaluation showed a white blood cell count of 10/μL, C-reactive protein of 44 mg/L, GLU of 270 mg/dL, hemoglobin of 92 g/L, erythrocyte sedimentation rate of 94, Hb1Ac of 8.9%, and osmolality of 327.66 mOsm/kg. Serum levels of sodium, potassium, calcium and magnesium were 140.8 mmol/dL, 3.81 mmol/L, 8 mg/dL and 1.9 mg/dL, respectively. Urine analysis showed the presence of GLU and protein without ketone bodies, and a later urine culture revealed Proteus mirabilis infection. Other tests including arterial blood gas analysis and hepatorenal function were within the normal range. Chest computed tomography revealed inflammatory areas in both lungs and bilateral pleural effusion. A lumbar puncture was performed and disclosed elevated levels of cerebrospinal fluid (CSF) protein (1040 mg/L) and GLU (5.9 mmol/L), with normal pressure (150 mmH2O) and cellular (1/μL). The oligoclonal band, serum antibodies to aquaporin 4, myelin oligodendrocyte glycoprotein and glial fibrillary acidic protein, as well as common antibodies to autoimmune encephalitis in CSF were all negative. 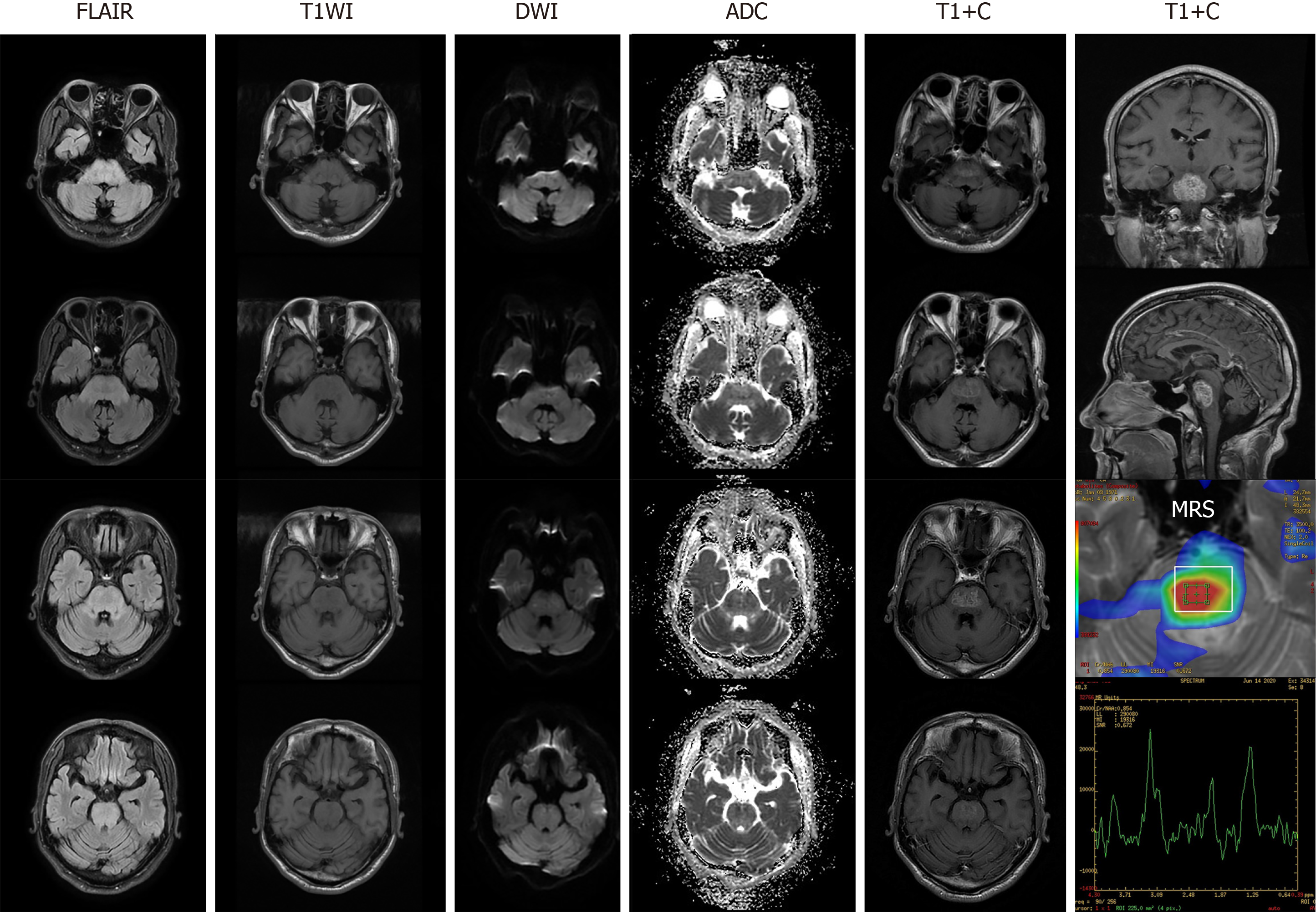 According to his clinical manifestations and auxiliary examination results, CPM secondary to hyperosmolar hyperglycemia was established as a most probable diagnosis finally.

He was administered anti-inflammatory therapy. In consideration that his condition progressively worsened, and the diagnosis of TDL could not be completely ruled out, corticosteroids were given as anti-inflammatory therapy on June 16. Following intravenous methylprednisolone pulse therapy (methylprednisolone 500 mg for 3 d, 250 mg for 3 d, 80 mg for 3 d), with fluctuating GLU (200 mg/dL to 280 mg/dL), his symptoms gradually resolved. Oral prednisolone was administered as sequential treatment (60 mg/d for 1 wk), followed by gradual dose tapering (10 mg/wk).

Articulation function, numbness and weakness of the limbs had almost disappeared on discharge after 1 mo of treatment. In the 2-wk follow-up period, all symptoms were resolved except for mild persistent gait disturbance, with similar imaging findings to the previously obtained images. After 3-mo of follow-up, rehabilitation had improved, and a normal range of electrolytes, arterial blood gas analysis, and hepatorenal function were observed. MRI manifestations on reexamination indicated reduced lesion volume and the lesions had almost disappeared in bilateral cerebral peduncles, along with disappearance of enhanced lesions (Figure 2). In addition, his pulmonary and urinary tract infections had resolved. He could walk unassisted and was treated with oral hypoglycemic drugs merely to control his GLU levels. In the latest follow-up, his functional state was restored and he carried out simple daily life activities independently. 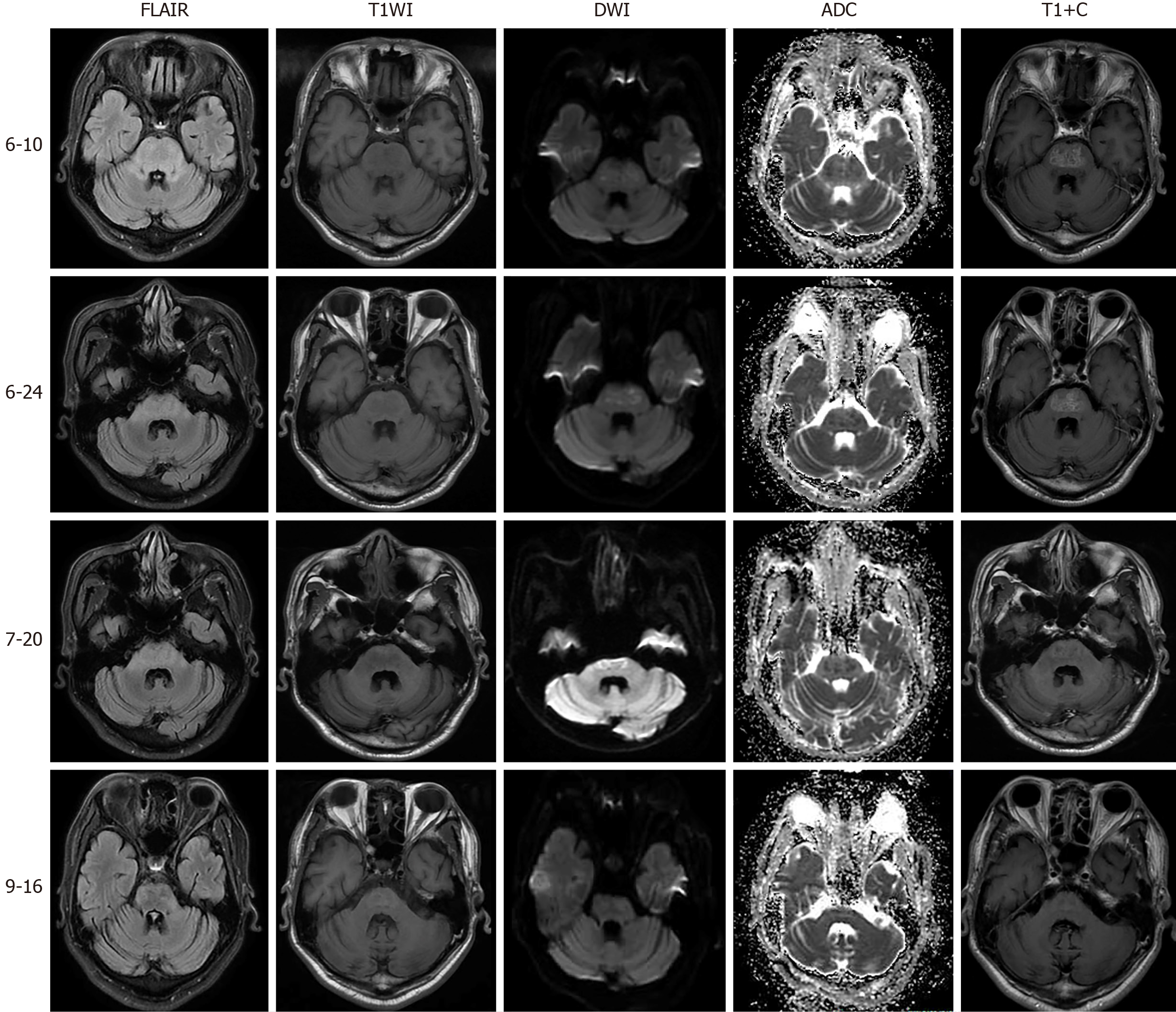 Currently, CPM is considered a rare complication of uncontrolled diabetes, which is supported by several reports in patients diagnosed with CPM secondary to hyperosmolar hyperglycemia[5-9]. In one such case report[5], a 28-year-old female with type 1 diabetes presented with an asymptomatic pontine lesion (named “asymptomatic pontine lesion”) and diabetic amyotrophy following rapid treatment of poor glycemic control. Other reports also indicated that patients with diabetes presented with brainstem dysfunction and revealed a CPM-like lesion on MRI[6-8]. For instance, a 20-year-old female with type 1 diabetes was reported to have an acute onset of spastic quadriparesis with dysarthria and mild ataxia[6]. In addition, a 45-year-old woman presented to the emergency department with an unsteady gait, dizziness and right-sided weakness[7]. Similarly, a 45-year-old male with a past medical history of type 2 diabetes, hypertension, stage V chronic kidney disease and hypothyroidism presented with a 2-wk history of intermittent episodes of gait imbalance, slurred speech and inappropriate laughter[8]. All these patients showed no obvious severe electrolyte abnormalities, were treated conservatively and gradually improved. However, a 29-year-old male with diabetic ketoacidosis and a history of surgical repair of a ventricular septal defect was found to have leukocytosis, severe metabolic acidosis, hypokalemia, and hyperglycemia, and was treated with a large amount of sodium bicarbonate and potassium chloride, which resulted in the development of CPM[9].

The lesions in our patient were unusual, and appeared glioma-like. Due to damage of the blood-brain barrier (BBB) and subsequent penetration of the contrast medium, the lesions of glioma usually present with variable signals, typically with inhomogeneous enhancement following contrast administration[11,12]. The signals in our case can be explained by partial damage to the BBB, as a result of chronic hyperglycemia and repeated changes in GLU concentrations between the blood and CSF[13]. However, without biopsy results, a positive therapeutic response and the imaging features were suggestive of glioma. Further follow-up could be helpful for a definite diagnosis. In general, given its therapeutic safety and acceptability, conservative therapy should be considered prior to invasive examination or surgery. Thus, it is critical to recognize and distinguish metabolic diseases from tumor or other intracranial mass lesions.

The therapeutic effect of corticosteroids is uncertain in CPM[4]. Corticosteroids demonstrate a ‘double-edged sword’. They can improve the vascular inflammatory reaction and lessen permeability and edema. In contrast, their side-effects such as altering blood GLU concentrations might further aggravate tissue damage due to hyperglycemia[14]. With rapid disease progression and suspected TDL, we treated our patient with corticosteroids[15]. However, we tapered the dose of corticosteroids relatively quickly for better control of GLU. As a result, the patient achieved a positive prognosis during follow-up. However, the efficacy of hypoglycemic treatment alone or in combination with corticosteroids remains unknown. Further studies are needed to compare their curative value.

CPM may be caused by diabetes, and could be associated with poorly controlled frequent hyponatremia. The imaging features could mimic glioma, with atypical inhomogeneous signal intensity on contrast-enhanced MRI. As a frequent disease in various hospital departments, early identification should be performed when patients with diabetes develop neurological symptoms especially with glioma-like imaging features. Tentative treatment with corticosteroids might be effective and improve the prognosis.