Congenital fiber-type disproportion (CFTD) is a form of congenital myopathy. CFTD is rare, especially when presenting in patients with critical illnesses. Here, we report a case of CFTD presenting with type II respiratory failure after delivery and provide a review of the literature on CFTD.

A 30-year-old woman was admitted to the obstetrics department of our hospital with premature rupture of the fetal membrane and with 7 h of regular contractions. After delivery, the patient experienced a refractory type II respiratory failure. Physical examination along with diagnostic procedures such as electromyography and biopsy confirmed CFTD. Use of invasive ventilator followed by intermittent use of noninvasive ventilator attenuated her symptoms. The patient recovered after ventilator-assisted respiration and was weaned off the noninvasive ventilator on the seventh day postpartum.

Congenital myopathy should be considered a differential diagnosis for type II respiratory failures that cannot be attributed to other diseases.

CFTD is a type of CM that is characterized by selective type 1 muscle fiber atrophy in the absence of other pathological changes. CFTD is usually caused by mutations in tropomyosin 3 (TPM3), ryanodine receptor 1, and actin alpha 1, skeletal muscle[3], whereas CFTD due to mutations of myosin, heavy chain 7, selenoprotein N, and TPM2 are relatively rare. The prognosis is generally good, and most patients exhibit a slowly progressive or static course of muscle weakness with hypotonia, respiratory insufficiency, dysphagia, and facial diplegia. Muscle weakness may involve the upper limbs, lower limbs, trunk, neck, and facial muscles; however, the laryngopharyngeal and ocular muscles are spared. General sensations and intelligence quotient are generally preserved, while deep tendon reflexes are diminished or absent. Patients with CFTD usually exhibit characteristic facial features including a thin and long face, a tall palatal arch, spinal deformities, clubfoot, and congenital dislocation of the hip joint. Myogenic damage can be observed on an electromyograph, and histological examinations reveal specific changes, such as a discordant fiber size [i.e. type 1 fibers significantly (12%) smaller than type 2 fibers], without other abnormalities.

CFTD is particularly rare in patients with critical illness. It is often neglected or misdiagnosed, which causes delayed therapy. In this rare case, the patient’s respiratory failure was initially considered to be caused by cardiopathy or fentanyl administration; however, physical examination along with diagnostic procedures such as electromyography and biopsy ultimately confirmed CFTD. We review the literature from etiology, clinical manifestation, diagnosis, and treatments of CFTD.

On December 13, 2016, a 30-year-old Han Chinese woman in 34+6 wk of pregnancy was admitted to the Department of Obstetrics, First Hospital of Jilin University, due to premature rupture of the fetal membrane and regular contractions for 7 h.

The patient reported no menstrual abnormalities. Her last menstrual period was on April 13, 2016, and the expected delivery date was January 20, 2017. She did not undergo regular prenatal examinations during her pregnancy.

The patient reported a development delay in learning to walk at the age of 6 years and had poor exercise endurance. She usually experienced troubled breathing, dizziness, and heavy perspiration after fast walking or running. However, she had not undergone systematic diagnostic procedure and had not been diagnosed officially.

The patient was unemployed, and had no history of smoking or drinking. No pertinent family history was presented.

The patient’s serum troponin level was normal, as were her liver function, renal function, and routine blood test results.

No imaging examination was performed in the Department of Obstetrics because of the emergency situation.

She was transferred to the labor room immediately. Considering her low oxygen saturation, a heart disease could not be ruled out. Therefore, perineal incision and forceps were used to assist the vaginal delivery and shorten the second stage of labor. A pre-term female neonate was delivered vaginally. Fentanyl (0.002 mg/kg) was slowly intravenously injected to relieve her pain and reduce the cardiac load. However, she continued to experience shortness of breath. Her cyanosis worsened, her heart rate was 120 beats per min, and her blood oxygen saturation ranged from 80%-85%. She was transferred to the intensive care unit immediately.

The patient was cyanotic and lacked spontaneous breathing when admitted to the intensive care unit. Immediately, endotracheal intubation was performed and the patient was put on ventilator-assisted respiration. Although, physical examination revealed a body mass index of 15.6, all other findings were normal. Recovery of spontaneous breathing was observed soon after intubation. Her oxygen saturation reached 100% with low respiratory support parameters. Tracheal intubation was removed on the second day postpartum.

Her cardiac color Doppler ultrasound and electrocardiography were normal. A careful physical examination revealed that she had certain characteristic facial features (Figure 1), most notably a thin, elongated face, and a high arched palate. Moreover, muscle volume was less in the limbs, trunk, face, and neck (Figure 2), and she exhibited scoliosis with a waddling gait. Computed tomography of the chest (Figure 3) revealed scoliosis. Considering the clinical manifestation and physical examination of the patient, motor neuropathy and respiratory muscular disease could not be excluded. Electromyography suggested a myopathic process (Figure 4). Biopsy of the left bicep brachia revealed a predominance of type 1 muscle fiber atrophy in the absence of other structural abnormalities, such as that of the rods or cores (Figure 5). Our patient's parents and brothers exhibited no signs of CM. They declined to undergo genetic testing. 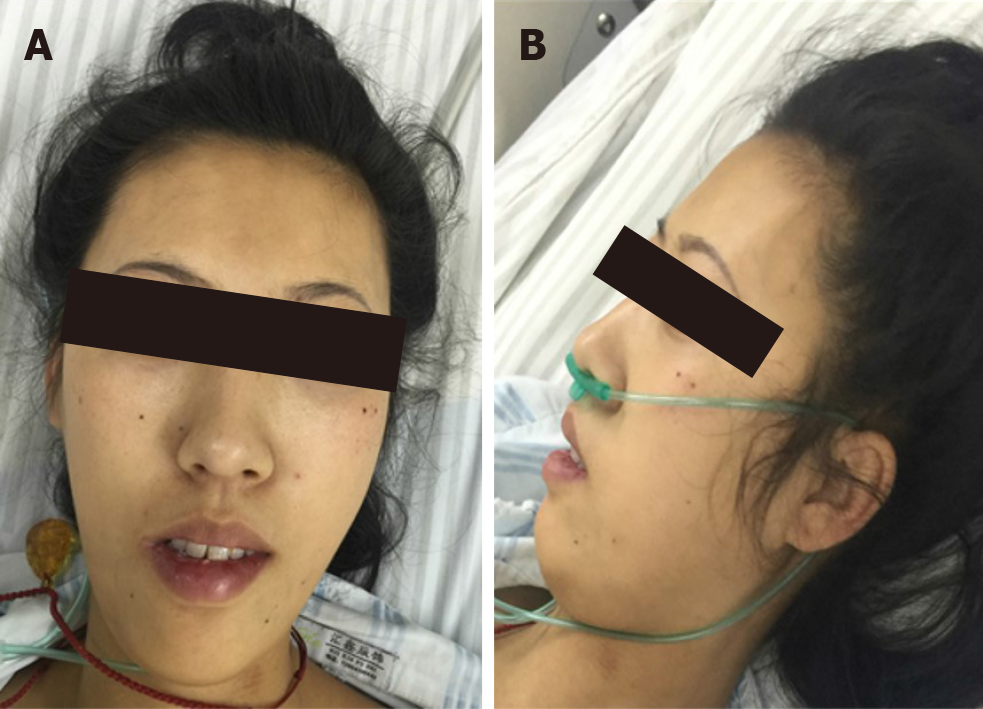 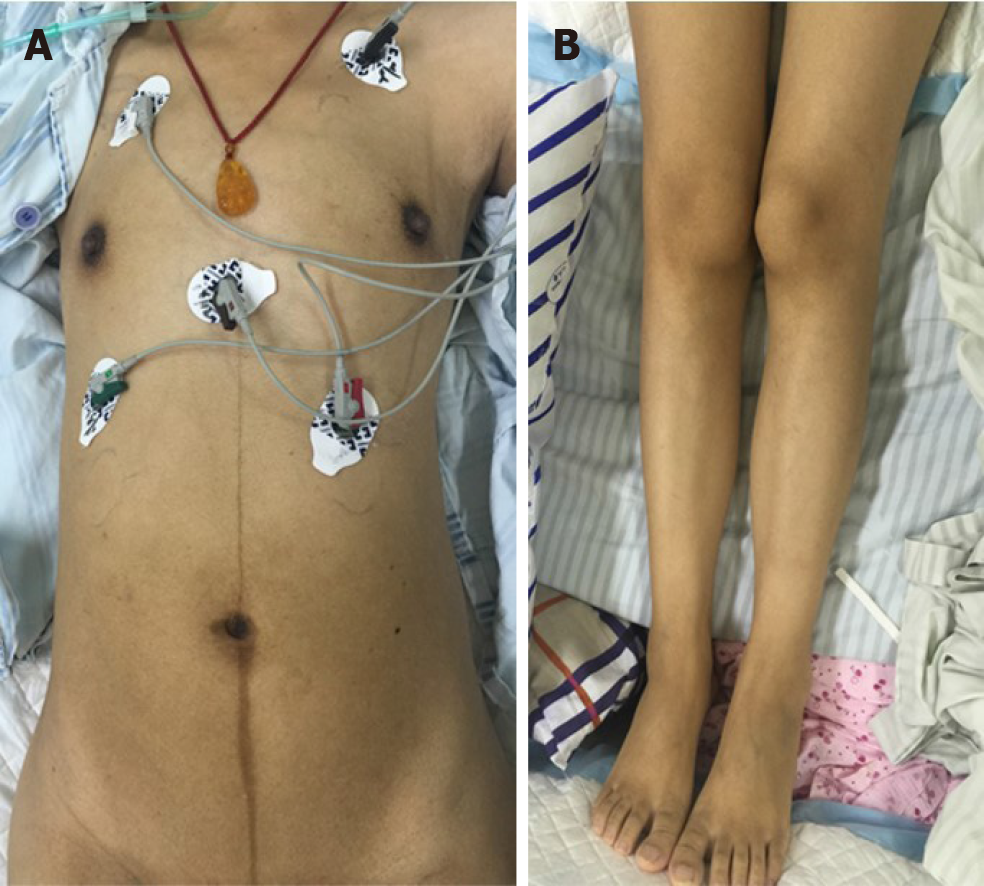 Figure 2 Low muscle volume. Muscle volume was less in the limbs and trunk.

The findings were indicative of CFTD.

At 10 h after extubation, the patient presented with carbon dioxide retention, hypoxemia, and respiratory distress. She became lethargic, her respiratory rate dropped to 10 breaths per min, and blood gas analysis revealed an oxygen partial pressure of 65-78 mmHg and a partial pressure of carbon dioxide of 64-85 mmHg. Intermittent use of a noninvasive ventilator attenuated her symptoms. The patient firmly requested to be discharged due to personal reasons and was discharged 4 d after delivery. However, she was re-admitted the same day due to carbon dioxide retention. A noninvasive ventilator was used intermittently to relieve her symptoms.

She was weaned from the noninvasive ventilator 3 d later and discharged from the hospital. The patient was advised to rest and reduce physical labor in her daily life. We recommended genetic test for her family including the child although they all refused. The patient did not attend follow-up visits at our hospital; thus, follow-up data are not available.

CMs are rare disorders with an estimated prevalence of 1 in 25000[4]. According to previous studies, the prevalence of CM is between 1.37 per 100000 (all age groups in northern England) and 5 per 100000 (children in western Sweden)[5,6]. CFTD is an uncommon type of CM first described by Brooke and Engel in 1973[7]. The main histological abnormality is selective type 1 muscle fiber atrophy in the absence of other pathological changes. Clinical manifestations of CFTD include muscle weakness, hypotonia, delayed motor milestones, characteristic facial features (e.g., an elongated or thin face, high palatal vault arches), spinal deformities, clubfoot, and congenital dislocation of the hip joint. Intelligence quotient is generally preserved. Myogenic damage can be observed on an electromyograph and histological examinations reveals that type 1 fibers are significantly (12%) smaller than type 2 fibers.

In contrast with the findings observed in patients with critical illness myopathies, the biopsy of our patient revealed a limited type I atrophy without other abnormalities[8]. Immediately after her delivery, she experienced a type II respiratory failure. Although, adequate ventilation was achieved with low respiratory support parameters, she continued to experience carbon dioxide retention following extubation. The disease was first mistaken as respiratory depression due to fentanyl administration. However, a thorough physical examination, electromyographic analysis, and biopsies confirmed the diagnosis of CFTD. Given that respiratory failure may be associated with the increased oxygen consumption during delivery, our patient may not have been able to fully compensate for these changes due to weak respiratory muscles. At present, genetic mutations can be identified in only 35%-45% of the patients who are clinically and histologically diagnosed with CFTD[9]. Our patient's parents and brothers exhibited no signs of CFTD. They declined to undergo genetic testing.

Previous studies have reported that patients with CFTD can experience complications such as central nervous system abnormalities and cardiomyopathy[10,11]. However, no such symptoms were observed in our patient. CFTD is often either missed or misdiagnosed as malnutrition, and there are no specific drugs or treatment modalities for this disease. Recent studies have focused on gene repair and adjustment therapy, which may render CFTD treatable in the future. Given their decreased tolerance to exertion, patients with CFTD should avoid physical labor and vigorous exercises to ensure a good quality of life and a long-term survival. For pregnant patients, cesarean section can be considered to reduce the respiratory load and avoid life-threatening respiratory failure.

Given a lack of understanding among most critical care physicians, the diagnosis of CFTD is easy to miss when differentiating between causes of respiratory failure. Our case highlights the need to consider CM in the differential diagnoses of a type II respiratory failure that cannot be attributed to other common diseases. Electro-myography and muscle biopsy can assist in diagnosis. Genetic testing should be performed in high-risk patients and their families to determine whether they carry the mutated gene.

We would like to express our gratitude toward the patient who consented to the publication of her case.