Research Domain of This Article
Pediatrics

Congenital hepatic fibrosis (CHF) is a rare autosomal recessive disorder characterized by variable degrees of periportal fibrosis and malformation of bile ducts. CHF is generally accompanied by a variety of conditions or syndromes with other organ involvement.

We report a 5-year-4-month-old Chinese boy with congenital hypothyroidism (CH) diagnosed with CHF. The patient was diagnosed with CH by a newborn screening test and has since been taking levothyroxine. He has developed normally without neurocognitive deficits. Abnormal liver function was observed in the patient at the age of 4 years and 11 mo, and elevated levels of liver function indices were persistent for 5 mo. Radiological imaging indicated hepatospleno-megaly without narrowing of the portal vein but dilated splenic vein. A liver biopsy confirmed the pathological features of CHF. Genetic testing revealed two novel homozygous mutations, namely, c.2141-3T>C variant in PKHD1 related to CHF and c.2921G>A (p.R974H) in DUOX2 related to CH. The patient was treated with compound glycyrrhizin tablet, ursodeoxycholic acid, and levothyroxine after diagnosis. The patient achieved a favorable clinical outcome during a follow-up period of over 2 years.

Herein, we report the first case of a Chinese boy with comorbidity of CHF and CH, carrying both PKHD1 gene and DUOX2 gene novel mutations. Liver biopsy and genetic testing should be considered for the diagnosis of coexistent liver disease in CH patients with unexplained abnormal liver function.

Core Tip: Congenital hepatic fibrosis (CHF) is often accompanied by a variety of diseases, but this case introduces a rare comorbidity of CHF and congenital hypothyroidism (CH). Moreover, this report includes a detailed process of its diagnosis and treatment, which highlights that timely liver biopsy and genetic testing can be valuable tools for the diagnosis and differential diagnosis of CH coexistent with unexplained abnormal liver function.

Congenital hepatic fibrosis (CHF) is a rare autosomal recessive hereditary disorder first described in 1961[1]. CHF is a fibropolycystic disease and is characterized by variable degrees of periportal fibrosis and malformation of bile ducts[2,3]. The prevalence of CHF is 1/10000-1/20000 in newborns[3,4]. CHF usually emerges in adolescence and early adulthood, and the clinical presentation of CHF varies greatly[4,5]. CHF has been reported to be accompanied by a broad range of disorders[5-10], but CHF in children with congenital hypothyroidism (CH) is extremely rare. CH is defined as a neonatal metabolic disorder, which may be caused by defects of thyroid hormone production in newborn infants[11]. Variants in different genes have been linked to CHF (such as PKHD1, TMEM67, and MKS1)[3] and CH (such as DUOX2, TSHR, and TPO)[12], but known variants do not account for all CHF or CH cases.

Herein, we report the case of a 5-year-4-month-old boy with CH and CHF, carrying both PKHD1 gene and DUOX2 gene novel mutations. The clinical, laboratory, radiological, treatment and clinical outcomes as well as liver histologic characteristics and genetic variants of the patient are described in the present study.

A 5-year-4-month-old boy was admitted to our hospital due to persistent abnormal liver function for 5 mo.

Elevated levels of alanine aminotransferase (ALT), aspartate aminotransferase (AST), alkaline phosphatase (ALP) and gamma-glutamyltransferase (GGT) were detected at the age of 4 years and 11 months, and these liver function indices were persistently abnormal for 5 mo (Table 1). During this period, the patient did not receive any relevant therapy.

After birth, he was diagnosed with CH by a newborn screening test, and he has been taking levothyroxine. No signs of persistent jaundice or hypoglycemia were found during the neonatal period.

The patient was born via cesarean section from healthy nonconsanguineous parents at full-term and weighed 2900 g.

He has developed normally (22 kg/117 cm) without neurocognitive deficits. Physical examination found that his spleen was palpable 2 cm below the left costal margin, and the liver edge was not palpable. Neuro-ophthalmic examination and eye movement were normal.

Cardiac ultrasound and chest X-ray showed no abnormalities in the heart and lungs. Ultrasound of the abdomen revealed an enlarged liver with diffuse increased splenomegaly without cystic changes of the liver or kidneys. Magnetic resonance imaging (MRI) and computed tomography angiography (CTA) indicated hepatosplenomegaly and dilated splenic vein but without bile duct malformation and narrowing of portal vein.

Liver biopsy demonstrated markedly enlarged portal tracts, widened fibrous septa, and proliferating bile ducts, which are typical of hepatic fibrosis (Figure 1A-D). Due to CH in this patient coexisting with unexplained liver fibrosis, clinical genome and exome sequencing was performed after obtaining informed consent from the parents. The following two novel homozygous mutations were identified: c.2141-3T>C in the PKHD1 gene and c.2921G>A in the DUOX2 gene (Figure 2A and B). In silico analysis revealed that the c.2141-3T>C mutation is predicted to destroy splice sites, influencing mRNA transcripts of PKHD1 and that the c.2921G>A homozygous variant in exon 22 of DUOX2 gene leads to a p.Arg974His substitution, which is predicted to affect protein splicing. Both mutations have been defined as uncertain significance according to the American College of Medical Genetics and Genomics guidelines (ACMGG), and they have not been described previously. The results also revealed that his parents were heterozygous carriers for both variants (Figure 2C-F). 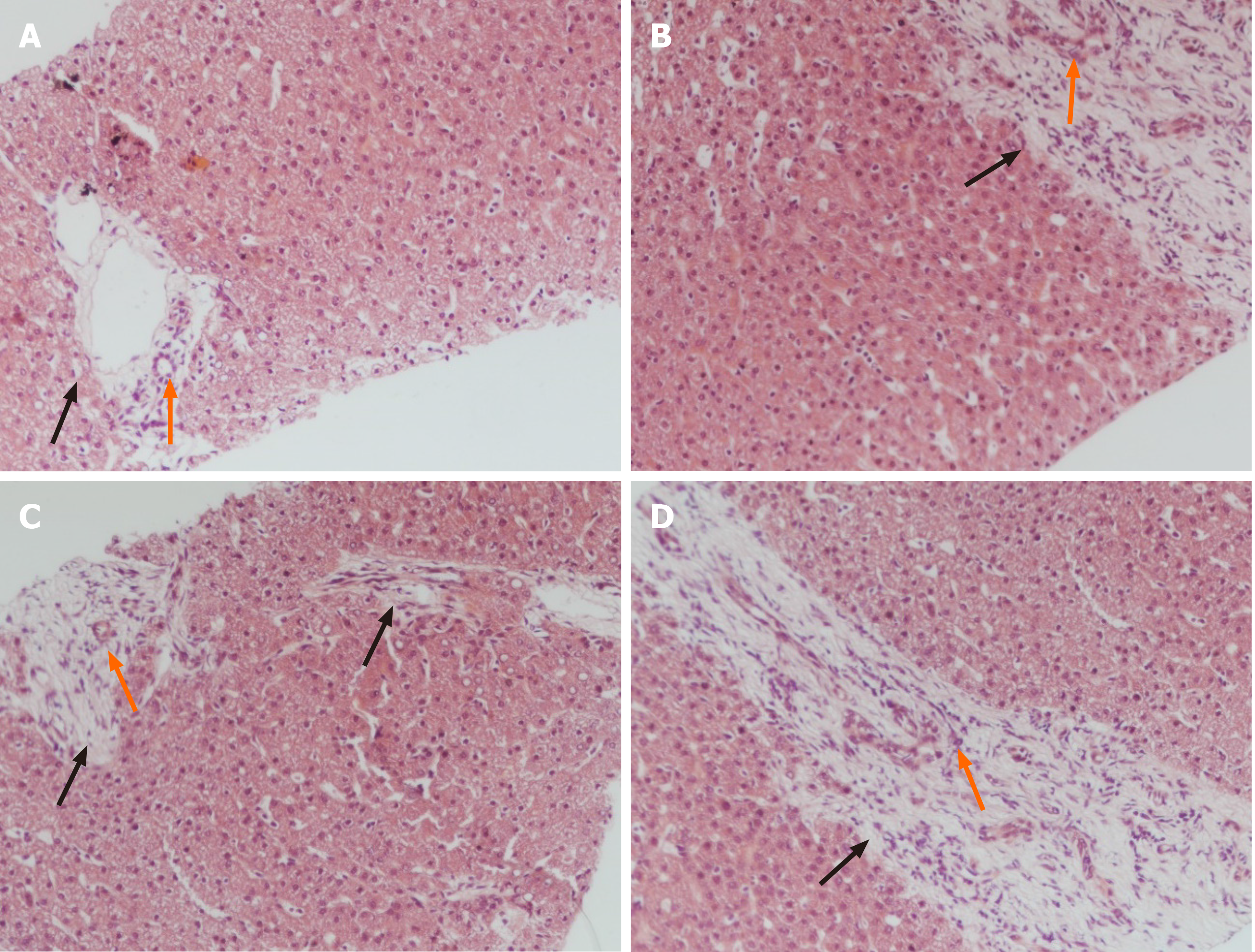 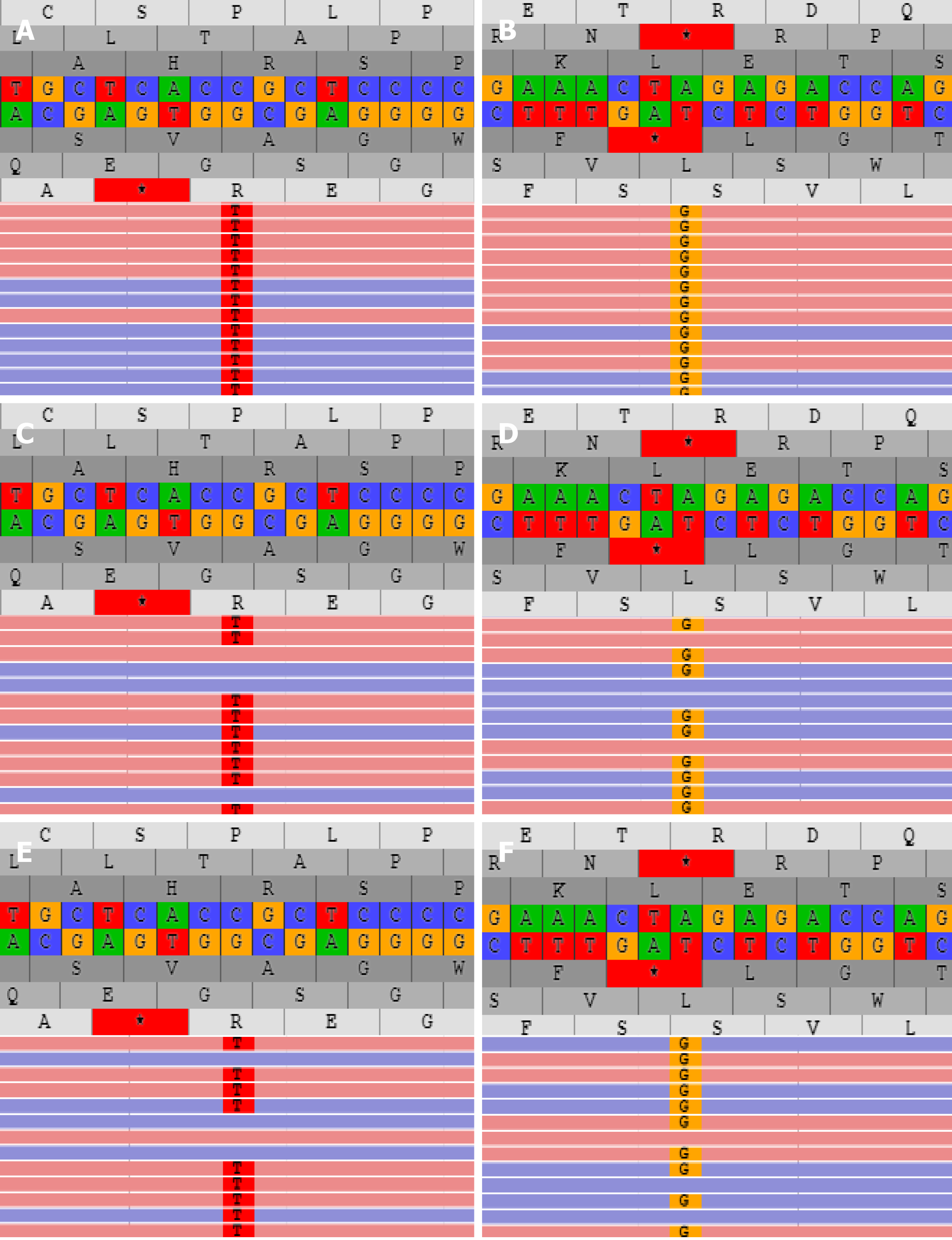 The diagnosis of CH with CHF was made.

During a follow-up period of over 2 years, the transaminase values were reduced, and hepatic function gradually ameliorated (Figure 3). The compound glycyrrhizin tablet was discontinued at 15 mo after hospital discharge. Currently, the patient is generally in good health despite the level of TBA being slightly elevated, and he continues to take ursodeoxycholic acid and levothyroxine (Figure 3). 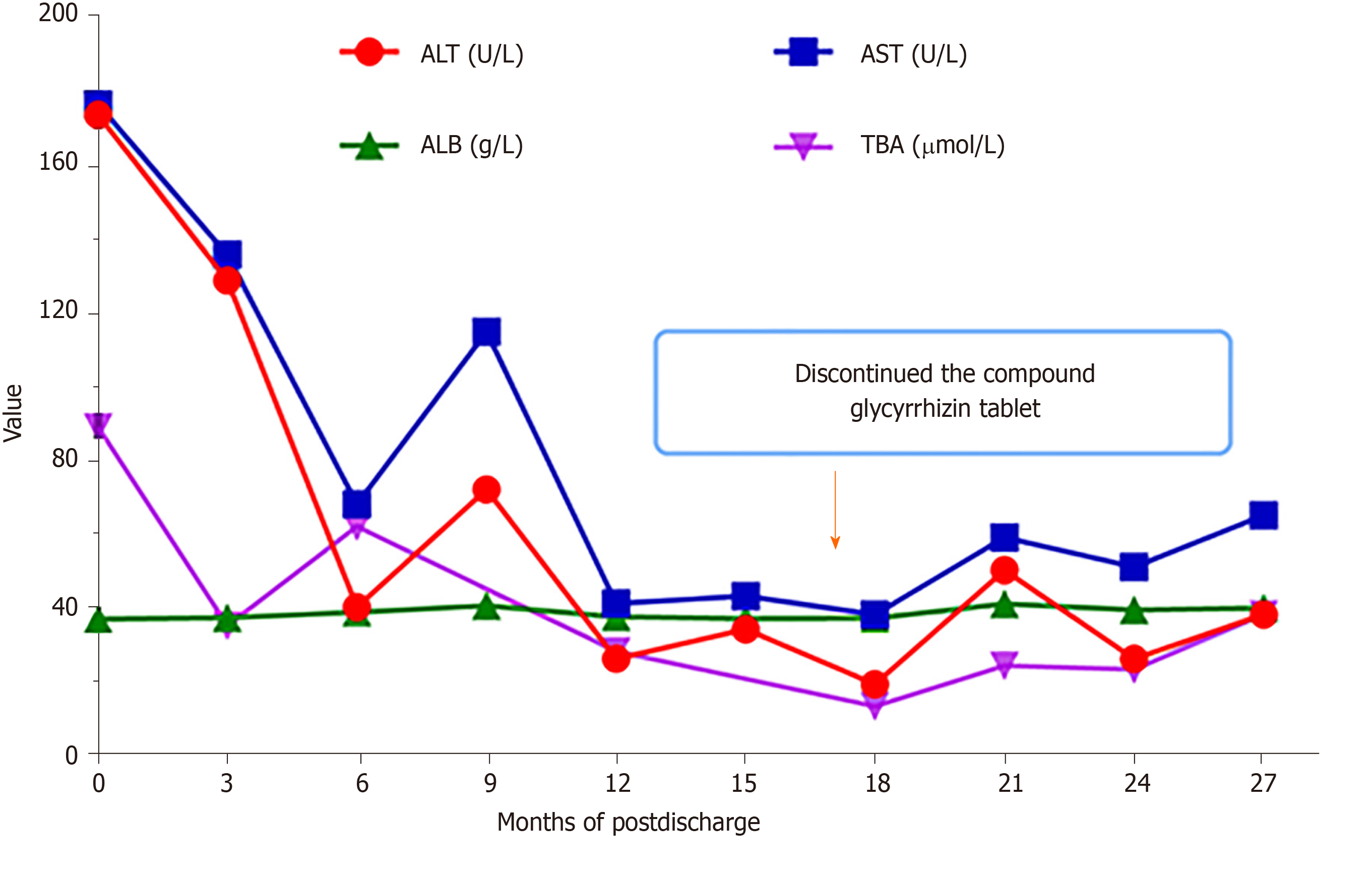 CHF is histologically defined as ductal plate malformation, abnormal proliferation of bile ducts, and progressive periportal fibrosis[2,13]. This disorder belongs to fibropolycystic diseases, and it involves damage to multiple organs[3]. Several syndromes associated with CHF have been reported, including Caroli disease[6,10], polycystic kidney disease (PKD)[7,14], and Prader-Willi syndrome[9]. CHF patients may present diverse clinical symptoms and even remain asymptomatic for a remarkably long period of time[10]. The common symptoms of CHF include hepatosplenomegaly, hypersplenism, gastroesophageal varices, and upper gastrointestinal bleeding caused by portal hypertension[3,4,10]. In this case, the patient experienced a period of mildly elevated liver enzymes with unknown etiology and splenomegaly. Based on an analysis of laboratory parameters and CTA, he was not diagnosed with portal hypertension. This required differential diagnosis as mild elevation of ALT and AST can occur in almost every liver disease[15]. Common liver diseases in children mainly include viral hepatitis, glycogen storage disease and Wilson disease[16]. In our case, hepatitis B surface antigen, anti-hepatitis C virus antibodies, ceruloplasmin and the fasting blood glucose test were normal. Abnormal GGT levels also required a separate differential diagnosis to exclude clinically relevant bile duct disease, such as primary sclerosing cholangitis and Caroli disease. The results of MRI did not show bile duct malformation; therefore, we ruled out these diseases. It is necessary to perform a comprehensive radiological examination in the diagnosis and differential diagnosis of CHF, and to assess the involvement of other organs. Moreover, the combination of CTA and MRI can provide more detailed information on the hepatosplenic artery and bile duct.

To date, the comorbidity of CHF in pediatric patients with CH is rarely reported in the literature. In 2003, Minami et al[8] reported a 7-year-old girl with septo-optic dysplasia and CHF. She was diagnosed with growth hormone deficiency and hypothyroidism confirmed by low levels of peripheral thyroid hormones. In this report, we described a boy with CH coexisting with CHF that does not fit with the well-known syndromes associated with CHF. The patient had liver fibrosis and hepatosplenomegaly, and a liver biopsy confirmed the pathological features of CHF. To the best of our knowledge, this is the first reported case of CHF with CH from China. For children with CHF, no specific therapies are available to prevent or reverse the process of hepatic fibrosis. Therefore, periodic monitoring of liver fibrosis progression is important. FibroScan is a point-of-care and noninvasive clinical device to detect liver fibrosis, and is more sensitive than conventional ultrasound[17,18]. Unfortunately, this test was not performed in our patient. CHF treatments depend on illness severity and complications. Liver transplantation is commonly one of the most effective treatments for children with CHF who develop severe complications of portal hypertension[4,5].

Several different genetic etiologies have been linked to CHF in the past decades, including mutations in PKHD1. The PKHD1 gene on chromosome 6p21.1-p12 encodes fibrocystin/polyductin, a protein highly expressed on kidney tubular epithelial cells and cholangiocytes of bile ducts[2,14]. This gene regulates cholangiocyte secretory activity and the expression of proteins involved in cell differentiation[2]. Researchers have reported over 300 mutations of the PKHD1 gene[14]. Mutations of the PKHD1 gene can cause defects in biliary cells and chronic low-grade inflammation derived from impaired bile ducts. The process triggers recruitment of macrophages at sites of injury, excessive deposition of collagen fibers, progressive fibrosis around the portal vein, compression of the portal vein radicles, and finally the development of several different syndromes, such as PKD[13]. Genetic testing in our patient revealed a novel homozygous mutation, c.2141-3T>C variant in PKHD1, which has been predicted to destroy splice sites, influencing mRNA transcripts of PKHD1. However, the renal function test in this patient was normal, and there were no signs that the kidneys were affected.

CH is a neonatal metabolic disorder, which is defined by inadequate thyroid hormone production in newborn infants[11]. Patients with severe CH may suffer growth retardation and permanent intellectual disability without treatment. Molecular mechanism studies have demonstrated that mutations in genes involved in thyroid hormone synthesis are linked to CH, including DUOX2[19]. DUOX2 is a member of the NAD phosphate oxidase (NOX/DUOX) family[20], and it generates H2O2 and participates in the TPO-mediated iodide organification reaction, which is required for thyroid hormone biosynthesis. Variants in the DUOX2 gene may result in transient or permanent forms of CH[20]. It has been reported that genetic mutations in DUOX2 are the main genetic cause of CH in the Chinese population[21,22]. In our reported case, the novel homozygous mutation, c.2921G>A (p.R974H), in DUOX2 was identified.

In summary, CHF is a rare hereditary disease, and the genotype-phenotype relationship has not been fully established. We report a rare comorbidity of CH and CHF with double novel homozygous mutations in PKHD1 and DUOX2. Liver biopsy and genetic testing should be considered for the diagnosis of coexistent liver disease in CH patients with unexplained abnormal liver function.

The authors thank the family for participating and supporting this study.