Eosinophilic granulomatosis with polyangiitis (EGPA) is a multisystem disease characterized by allergic rhinitis, asthma, and a significantly high eosinophil count in the peripheral blood. It mainly involves the arterioles and venules. When the coronary arteries are invaded, it can lead to acute myocardial infarction (AMI), acute heart failure, and other manifestations that often lead to death in the absence of timely treatment.

A 69-year-old man was admitted to the emergency department due to chest pain for more than 1 h. He had a past history of bronchial asthma and chronic obstructive pulmonary disease and was diagnosed with AMI and heart failure. Thrombus aspiration of the left circumflex artery and percutaneous transluminal coronary angioplasty were performed immediately. After surgery, the patient was admitted to the intensive care unit. The patient developed eosinophilia, and medical history taking revealed fatigue of both thighs 1 mo prior. Local skin numbness and manifestations of peripheral nerve involvement were found on the lateral side of the right thigh. Skin biopsy of the lower limbs pathologically confirmed EGPA. The patient was treated with methylprednisolone combined with intravenous immunoglobulin and was discharged after 21 d. On follow-up at 7 d after discharge, heart failure recurred. The condition improved after cardiotonic and diuretic treatment, and the patient was discharged.

Core Tip: Eosinophilic granulomatosis with polyangiitis is a rare disease. Clinicians should be alert to the possibility of non-atherosclerotic coronary stenosis when finding non-diffuse coronary artery disease. Herein, we report a 69-year-old man who was diagnosed with acute myocardial infarction and who subsequently experienced unexplained heart failure and cardiogenic shock. The patient was eventually diagnosed with eosinophilic granulomatosis with polyangiitis, and these heart manifestations were one of the multiple organ dysfunction. After treatment with methylprednisolone combined with intravenous human immunoglobulin, the patient’s condition improved and he was discharged. Follow-up showed that heart failure recurred at 7 d after discharge.

Eosinophilic granulomatosis with polyangiitis (EGPA), also known as Churg-Strauss syndrome, is a multi-system disease of unknown etiology. It is characterized by allergic rhinitis, asthma, and significantly increased eosinophil count in the peripheral blood[1]. EGPA is a rare disease, with a prevalence rate of 17.8/1000000 individuals[2]. The disease usually occurs between 20 and 40 years of age, and it has no sex predilection. Pathologically, it is characterized by vasculitis that mainly involves the arterioles and venules; furthermore, it can invade medium-sized blood vessels, such as the coronary arteries. The main organs involved are the lungs, heart, kidneys, skin, and peripheral nerves, and its pathogenesis may be related to immune abnormality.

A 69-year-old man was admitted to the emergency department on February 7, 2021 due to “chest pain and discomfort for more than 1 h.”

The patient had chest pain and discomfort for more than 1 h. After entering the emergency room, chest tightness and shortness of breath aggravated, and he developed cough accompanied by pink frothy sputum.

In January 2021, he developed fatigue in both thighs and local numbness on the lateral side of his right thigh; thus, he was treated with acupuncture. Due to “chest tightness and shortness of breath,” he was admitted to another hospital for treatment; his blood test revealed a troponin level of 1.29 ng/mL. No significant coronary lesions were found on coronary angiography. Later, he was hospitalized in the Department of Hematology of our hospital. The patient was diagnosed with bronchial asthma, chronic obstructive pulmonary disease with acute lower respiratory tract infection, coronary atherosclerosis with cardiac function grade III (New York Heart Association grade), and prostate hyperplasia. The patient’s condition was improved, and he was discharged.

The patient had no bad habits, such as smoking and alcohol drinking, and had no family history of diabetes or hypertension. 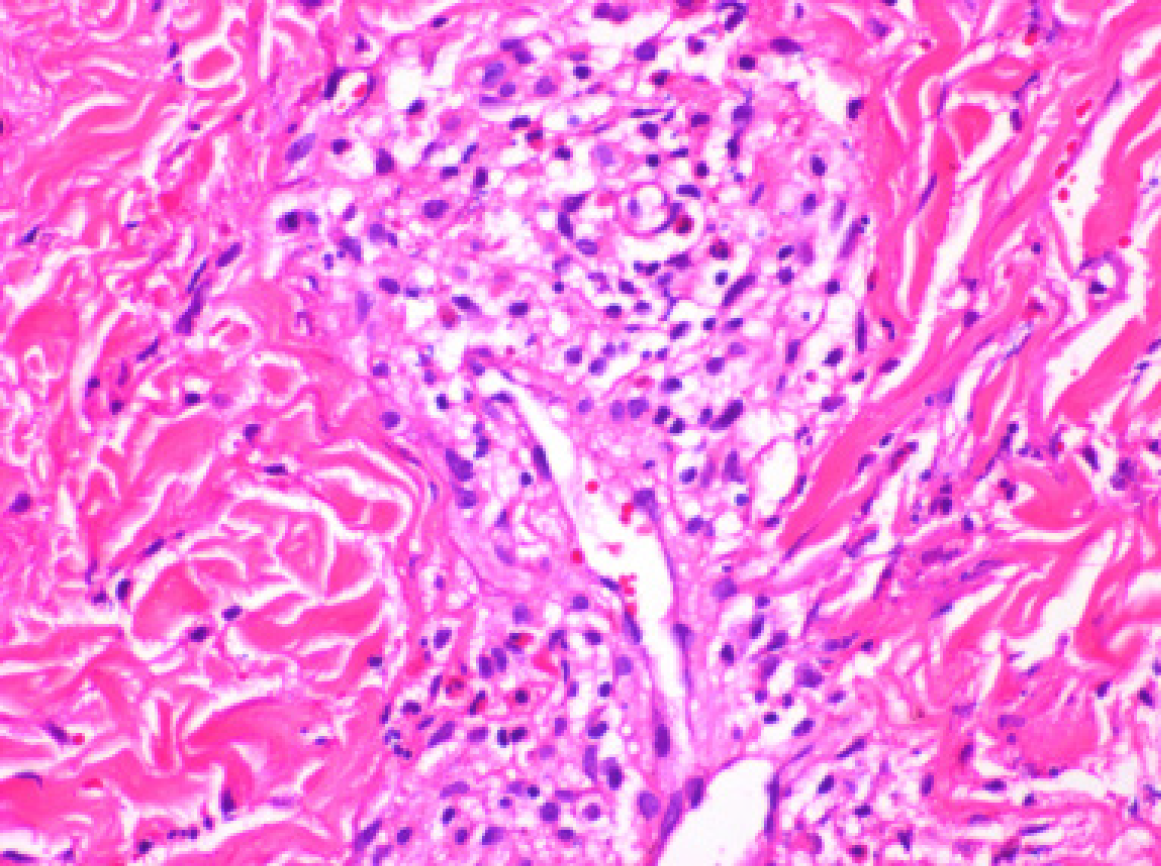 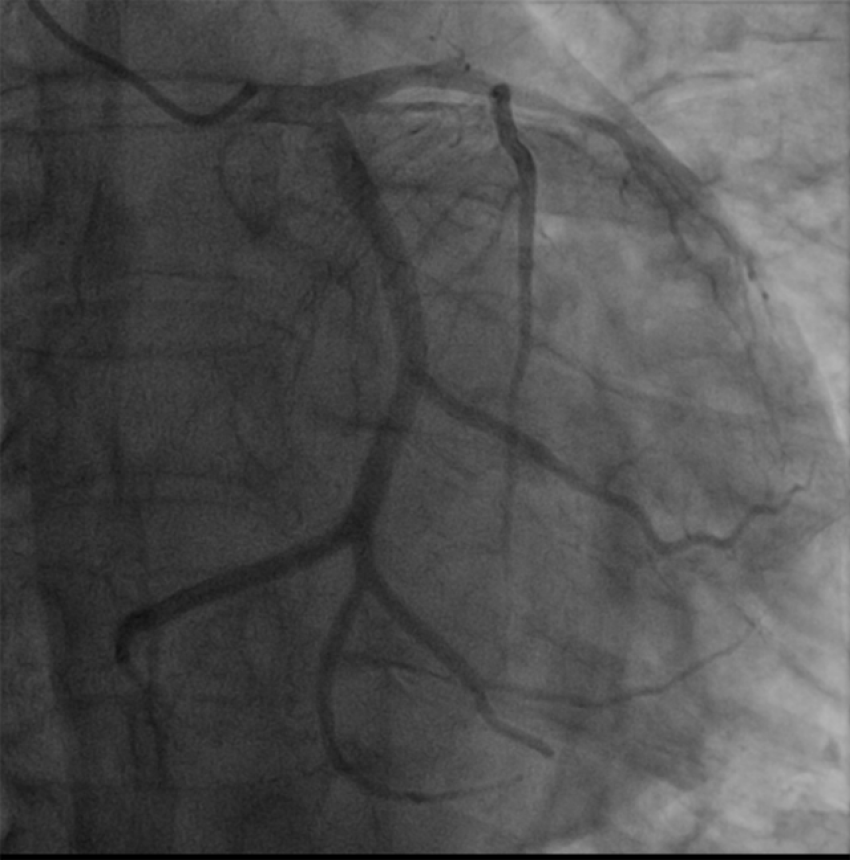 Endotracheal extubation was performed after 11 d, and the intra-aortic balloon pump was removed after 15 d. He was transferred to the Department of Cardiology after 20 d and discharged after 21 d. Follow-up at 7 d post-discharge showed recurred heart failure, and he was readmitted. Color Doppler echocardiography indicated decreased contractile activity of the whole left ventricular wall, enlarged left atrium and left ventricle, moderate pulmonary hypertension with severe tricuspid regurgitation, moderate mitral regurgitation, mild regurgitation of the aortic and pulmonary valves, and pericardial effusion. Chest computed tomography showed signs of acute pulmonary edema with bilateral pleural effusion accompanied by atelectasis in the lower lobes of both lungs, an enlarged heart, and a small amount of pericardial effusion. The use of hormones was continued. The patient’s condition improved after cardiotonic and diuretic treatment, and he was discharged after 10 d.

We report a 69-year-old man who was diagnosed with acute myocardial infarction (AMI) and unexplained heart failure. The patient was eventually diagnosed with EGPA. To date, EGPA is still diagnosed according to the criteria published by the American College of Rheumatology in 1990[3]: (1) Asthma: History of wheezing or diffuse high-pitched rales when exhaling; (2) Eosinophilia: Eosinophils in the white blood cell, an absolute number > 1500/µL or percentage > 10%; (3) Single or multiple neuropathy, i.e., stocking-and-glove distribution; (4) Unstable pulmonary infiltration: Migratory or temporary pulmonary infiltration on chest radiographs due to systemic vasculitis; (5) Sinusitis; and (6) Extravascular eosinophil infiltration: pathological examination showing eosinophil infiltration around the arteries, arterioles, and veins. Those who meet at least four of the above items are diagnosed with EGPA. The current patient had AMI, heart failure, cardiogenic shock, skin and peripheral nerve involvement, and a past history of asthma for many years. Combined with extravascular eosinophil infiltration on pathological examination, he satisfied the diagnostic criteria.

The most common cause of myocardial infarction is thrombosis under the background of coronary atherosclerosis, which leads to a decrease in coronary blood flow. Coronary angiography of this patient showed that the walls of the major coronary arteries, such as the right coronary artery and left main coronary artery, were smooth. Further, the distal segments of the left circumflex artery and left anterior descending artery were occluded. During surgery, the left circumflex artery was repeatedly dilated and aspirated. It had blood flow recanalization, although blockage reoccurred. In contrast to common AMI in the coronary vessels, recanalization yielded an unsatisfactory effect. The dynamic observation on electrocardiography and B-ultrasonography later cannot explain severe heart failure and cardiogenic shock; thus, other rare causes of myocardial infarction should be considered.

Such cases are very rare. A similar case[4] reported a young man with ST-elevation myocardial infarction accompanied by severe triple-vessel disease. Complete recovery was achieved after immunosuppressive treatment. In another case report, a 45-year-old woman[5] presented with acute coronary syndrome that recurred after drug treatment, and finally EGPA causing coronary artery inflammation was considered. Heart involvement is one of the serious manifestations of EGPA; it is mainly caused by eosinophils infiltrating into the myocardium and coronary vasculitis. The main manifestations[6,7] are cardiomyopathy, pericarditis, and heart failure. Patients with delayed treatment primarily die of AMI or acute heart failure. Multivariate logistic regression analysis of 121 patients with EGPA in Japan[8] showed that myocardial involvement is a risk factor for EGPA recurrence. Therefore, the heart failure in our patient might have been caused by multiple factors, such as coronary vasospasm, vasculitis, and even myocarditis[9].

High-dose glucocorticoids are currently the first choice for EGPA treatment[10]. Most patients respond well to glucocorticoids, although approximately 20% of them still require immunosuppressants. Some experts suggested that IVIG can be used as a second-line treatment for patients with EGPA taking glucocorticoids (and/or other immunosuppressive agents)[11]. Our patient had severe heart failure, and IVIG was added in addition to the glucocorticoids. The eosinophil count was significantly decreased the next day. A similar study [12] found that large-dose intravenous IVIG treatment can significantly improve cardiac function, and patients respond well to this treatment strategy. Early and effective treatment provides a relatively good prognosis. The main cause of death in EGPA is refractory heart failure caused by myocardial involvement. Heart failure recurred after discharge in our patient, although this was improved after active treatment. Therefore, for such patients, the use of glucocorticoids is very important post-discharge.

EGPA can be easily misdiagnosed, resulting in delayed treatment. Asthma, impaired cardiac function, and eosinophilia are helpful symptoms, and this rare disease can be detected on biopsy. Early diagnosis can improve the prognosis in such patients.