Research Domain of This Article
Medicine, Research and Experimental

A 29-year-old woman with pain, swelling and limited movement of her left lower limb after a car accident was taken by ambulance to our hospital. X-ray examination showed fracture of the middle and lower part of the left femur and fracture of the base of the left fifth metatarsal bone. She was hospitalized and admitted to the orthopedic ward. After the attending doctor performed tibial tubercle bone traction, the patient became confused, followed by respiratory distress. Finally, she was transferred to the intensive care unit. After nearly a month of treatment in the intensive care unit, the patient's cognitive function gradually recovered over 6 mo.

For patients with early traumatic fractures, young emergency physicians and orthopedics should be aware of the possibility of FES.

Core Tip: Early fat embolism syndrome (FES) is a rare complication of traumatic orthopedics. For patients with sudden hypoxemia and atypical neurological symptoms, young orthopedic surgeons on duty and emergency department physicians should take these symptoms seriously and be highly suspicious of FES. These patients should be immediately transferred to the intensive care unit for life-supportive treatment.

Fat embolism syndrome (FES) is a rare disease characterized by respiratory distress, cerebral neurological symptoms and rash, is a serious threat to human life and health. Due to the lack of verifiable diagnostic criteria, the actual incidence of FES varies in different reports[1-3]. The most frequently used criteria are Gurd’s[4] and Gurd and Wilson’s[5], which require patients to meet at least one major criterion and at least four minor criteria for a diagnosis of FES. Here, we report a rare case of acute fat embolism that presented within 3 h after femoral fracture. The patient has recovered and has a good prognosis.

The chief complaints were severe pain in the left thigh and swelling with limited movement. The patient did not experience headache, dizziness, chest tightness or other discomfort.

A 29-year-old woman went to the emergency department of our hospital because of a car accident and was admitted to the orthopedic ward with a fracture of the middle and lower femur of the left lower limb.

The patient had no previous medical history.

The patient had a body temperature of 36.5 ℃, pulse of 108 beats/min, respiratory rate of 20 breaths/min, blood pressure of 97/57 mmHg, and blood oxygen saturation of 100%. She had a clear mind and was in good spirits, her pupils were equal in size and sensitive to light, and she had a Glasgow Coma Scale (GCS) score of 15 points. No obvious abnormality was found on head and chest physical examination, and the results of the physical examination was consistent with femoral fracture. After admission, laboratory examinations (Table 1) were performed, fluids and pain relief were provided, and the patient was prepared for left tibial tubercle bone traction treatment.

On admission, routine examination indexes were basically normal (1.5 h after trauma) and there were no obvious signs of fat embolism. Within a few hours, abnormal red blood cell counts, white blood cell counts, hemoglobin levels, and albumin levels and other indicators of progressive changes were observed (Table 1).

After X-ray examination, the patient was diagnosed with a fracture of the middle and lower part of the left femur and a fracture of the base of the left fifth metatarsal bone (Figure 1). After disturbance of consciousness, the results of computed tomography (CT) showed that there was no obvious abnormality in the skull but contusion of both lungs (Figure 2). After her condition was relatively stable, we performed ORIF on the femur (Figure 3). 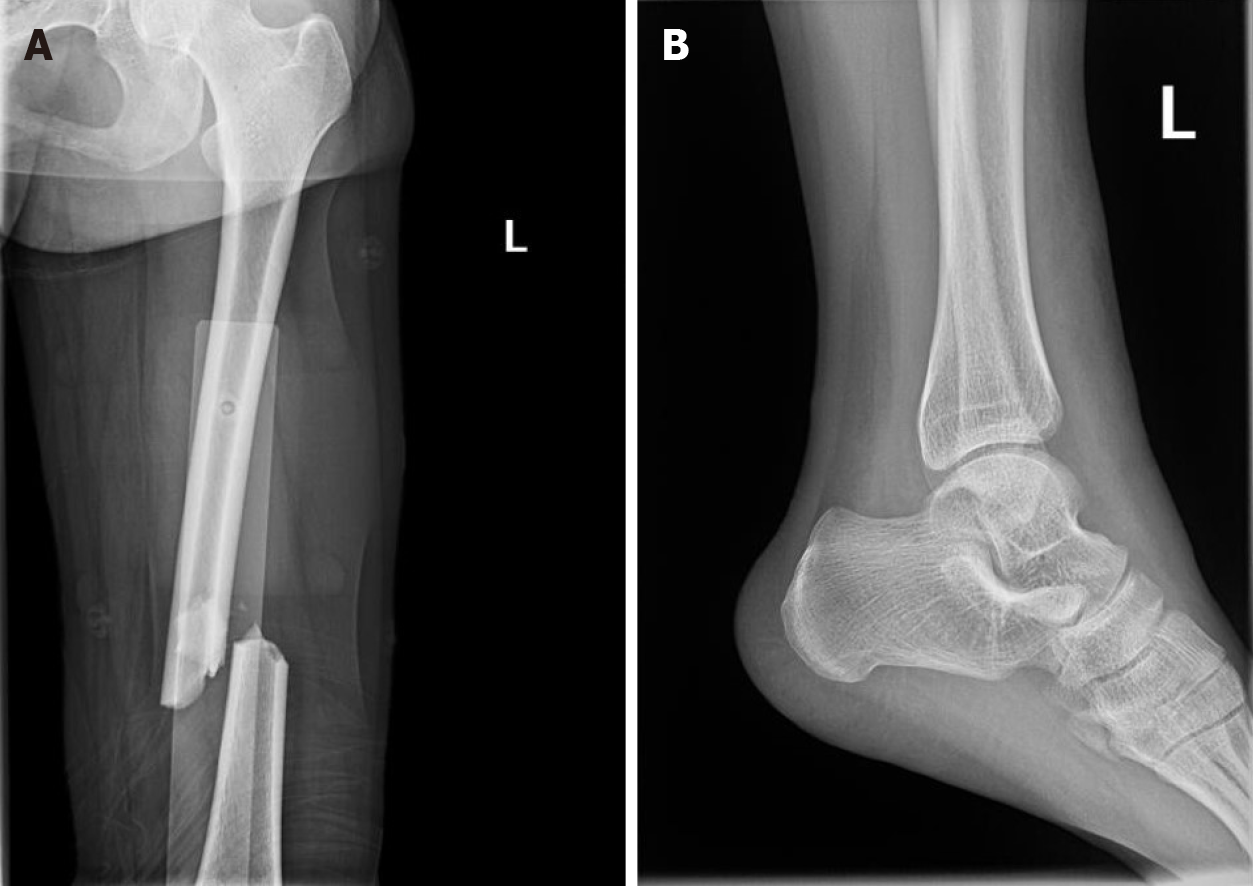 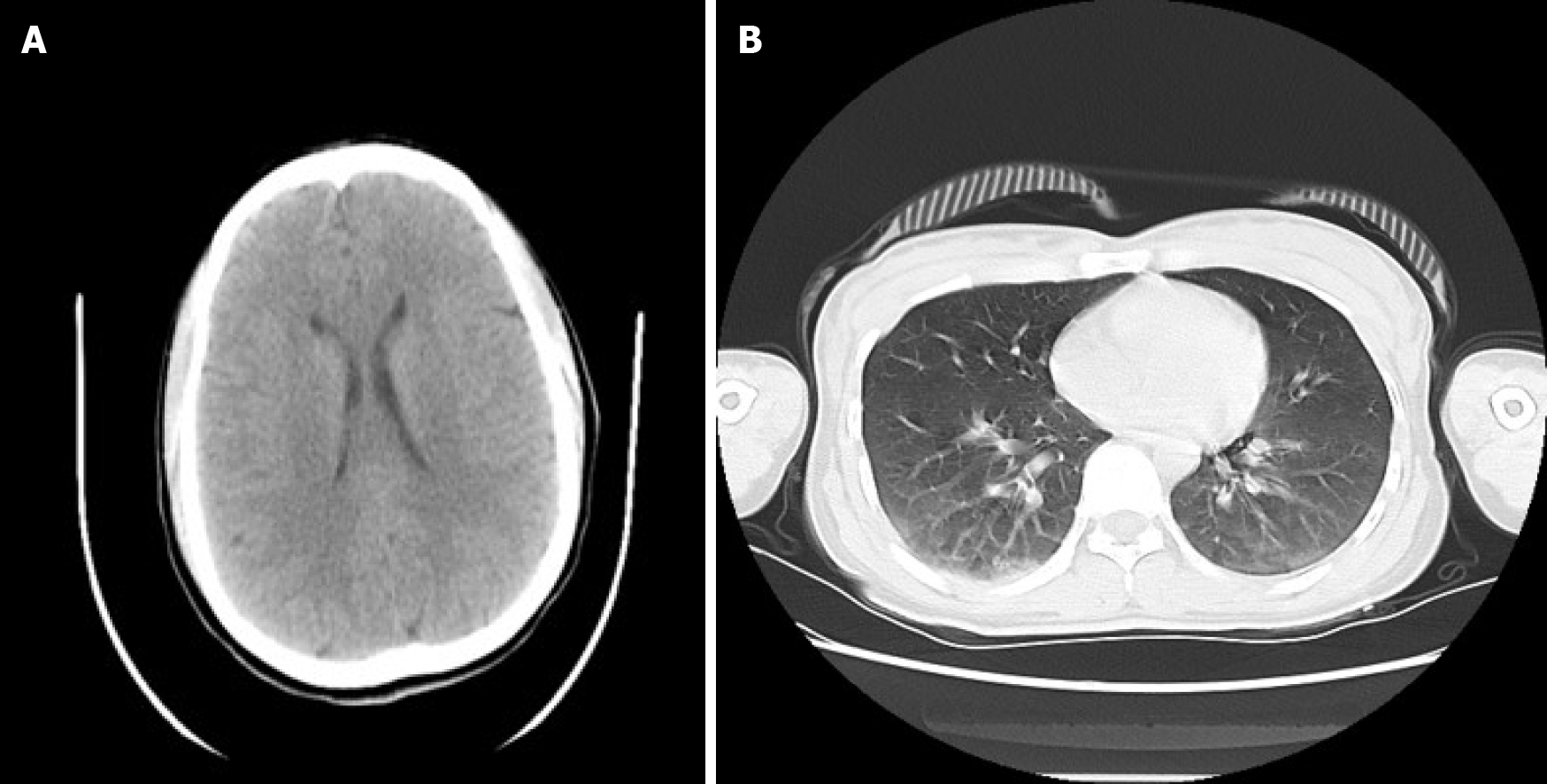 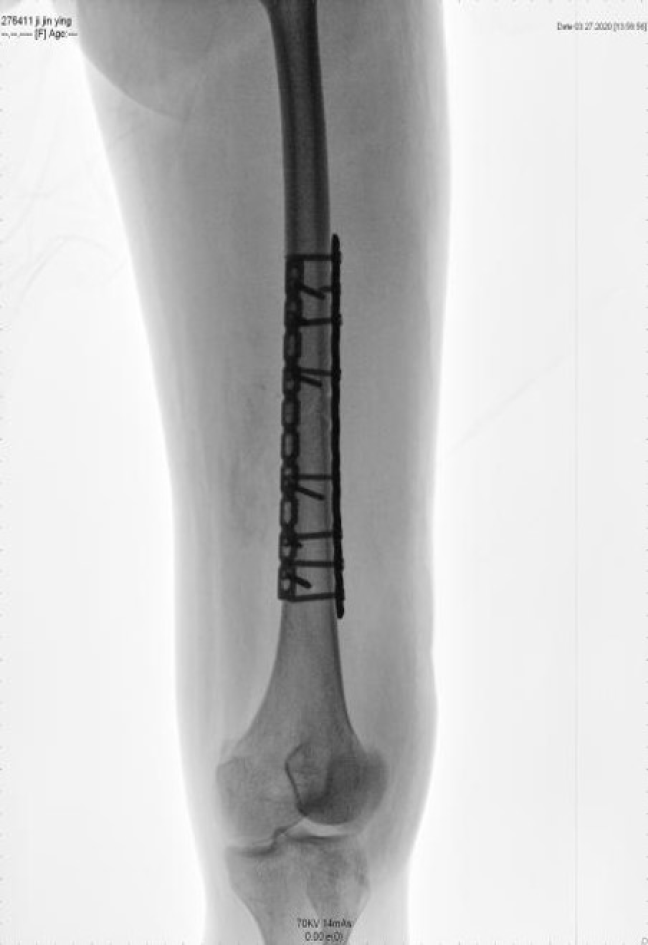 Unfortunately, within 30 min of the patient being hospitalized, that is approximately two and a half hours after the injury, the patient’s consciousness gradually changed from awake to confused and poor. At that time, aggravation of shock, brain trauma and thoracic and abdominal organ injury had not been excluded. Urgent examination of the head, chest and abdomen by spiral CT (Figure 2B), and a plain scan of the head suggested no abnormality; however there were multiple contusions in both lungs and a reexamination was recommended.

At this time, the patient’s consciousness was still clouded, and she had to be asked to open her eyes. Her GCS score was 9. Continuous monitoring of vital signs, oxygen intake, and blood transfusions were performed, and fluids were provided to maintain water and electrolyte balance. Emergency blood gas analysis (Table 1) showed a partial pressure of carbon dioxide of 30.50 mmHg, partial pressure of oxygen of 80.50 mmHg, and oxygenation of 95.3%. Then, the patient experienced an increase in heart rate to 110-138 beats/min, an increase in respiratory rate to 25-36 beats/min, and a progressive decrease in blood oxygen saturation by 95%-78%, and the patient was found to be in a deep coma with a GCS score of 5. Endotracheal intubation and ventilator assistance was performed, and the patient was transferred to the intensive care department at midnight for further treatment. The therapy of patients in the intensive care unit was as follows: Central monitoring; endotracheal intubation; ventilator assistance; close observation of mental state and pupillary changes; early hormone treatment; supplementation with albumin, plasma, and concentrated red blood cells; maintenance of water and electricity balance; and other supportive treatment.

FES refers to a clinical syndrome of systemic changes resulting from microcirculation embolism caused by free fat particles with a diameter of 10-40 μm entering the blood circulation through a ruptured vein after severe trauma[6]. The most common scenario is that the free fat particles in the bone marrow cavity after fracture are squeezed into the blood circulation and block the microcirculation of the brain, lung and other organs. It has been proven that orthopedic operations might induce FES during intramedullary fixation of long bone fractures. Repeated reaming, forced injection of an intramedullary needle and filling of bone cement during the operation may lead to FES. It has also been reported that fat embolism can occur during and after joint replacement[7]. The latest literature research shows that FES is most common in young men in the third decade of life following multiple leg fractures. FES may be more common after burst fracture[8]. However, our patient was a young woman with femoral fracture.

The pathophysiological mechanism of FES has not been fully elucidated. At present, it is generally believed that its pathogenesis mainly includes physical and mechanical mechanisms and biochemical mechanisms. In the case presented, both theories are applicable, as outlined below. Mechanical theory proposes that fat cells in the bone marrow gain access to venous sinusoids after trauma. These fat cells have potent proinflammatory and prothrombotic potential. They trigger rapid aggregation of platelets and accelerate fibrin generation as they travel through the venous system, eventually lodging in the pulmonary arterial circulation. Pulmonary capillary obstruction leads to interstitial hemorrhage and edema, alveolar collapse, and reactive hypoxemic vasoconstriction. Massive fat emboli may also lead to macrovascular obstruction and shock[9]. Fat cells may also enter the arterial circulation via a patent foramen ovale or directly through the pulmonary capillary bed, causing the characteristic neurological and dermatologic findings of FES[10].

Biochemical theory holds that the clinical manifestation of FES can be attributed to inflammatory reactions. Bone marrow fat is broken down by tissue lipase, resulting in high levels of triglycerides and toxic free fatty acids. Its toxic damage to pulmonary vascular endothelial cells can lead to angiogenesis, cytotoxic edema and bleeding. Damaged pulmonary vascular endothelial cells trigger a cascade of proinflammatory cytokines, leading to acute lung injury or acute respiratory distress syndrome[11]. This theory explains the delay from the occurrence of traumatic factors to the onset of clinical symptoms of a few hours to a few days. However, the timing of onset of our patient’s symptoms fits better with biochemical theory.

What was extraordinary and challenging in our case? First, our case is extremely rare, and the patient showed rapid progression within 3 h after the injury. Most FES cases occur between 12 and 72 h postinjury[12], and only a few cases have occurred within 12 h after injury[4]. According to the latest global report, the shortest amount of time between the occurrence of trauma and the development of a fat embolism is 55 minutes[13] (Table 2). Second, the presentation of FES is commonly nonspecific, making the diagnosis difficult. The most frequently used diagnostic criteria are Gurd’s and Wilson’s[5] (Table 3). However, our patient presented with acute respiratory failure without radiographic changes. There was no abnormality on CT scans of the brain. On the 3rd d after the injury, a typical bleeding point of a fat embolism appeared under the skin of her chest. In other words, none of the three main criteria seems to fully meet the diagnosis of FES. According to the statistics, the cause of death of many patients with explosive fat embolism can only be confirmed by autopsy. That is, fat particles are found in the blood vessels of the lung and brain tissue, which provides direct evidence for the diagnosis of FES[14]. Third, because it is difficult to diagnose, clinicians are particularly likely to mistakenly believe that craniocerebral injury or trauma and hemorrhagic shock cause symptoms and delay appropriate treatment. After the accident, we also had to rule out these shocks for our patient.

In addition, it is important to consider that FES is not necessarily accompanied by organic changes in the brain tissue; CT scans of the brain may be normal, but brain magnetic resonance imaging is more sensitive in detecting FES[15]. During the CT examination, the patient showed abnormal vital signs, and emergency treatment was needed at this time. Thus, there was no time for a cerebral MRI.

There are currently no disease-specific treatments for FES. Supportive intensive care unit–level care is standard. Most patients are severely hypovolemic and require fluid resuscitation[10]. FES is then described as having a self-limiting course with management consisting predominantly of fracture fixation and supportive care[16]. After one month of symptomatic and supportive treatment, our patient finally achieved a satisfactory outcome.

Explosive fat embolism is rare and can be fatal; therefore, for patients with trauma and long shaft fractures of the extremities, if there are inexplicable brain symptoms in the early stage (after excluding brain trauma), young frontline doctors on duty in emergency and orthopedics departments should strongly suspect the possibility of explosive FES and transfer the patient from the general ward to the intensive care unit as soon as possible to facilitate rescue and supportive care.