Research Domain of This Article
Anesthesiology

A 59-year-old man was hospitalized for intraocular foreign body removal surgery. He was a heavy-drinking smoker and had untreated hypertension and varicose veins in both legs. The operation was unexpectedly prolonged, lasting 4 h and 45 min. Immediately after emergence from general anesthesia, the patient complained of extreme pain in both legs. After the surgical drape was removed, cyanosis was evident in both feet of the patient. The pulse was not palpable, and continuous-wave Doppler signals were inaudible in the bilateral dorsalis pedis and posterior tibial arteries. Computed tomography angiography confirmed acute bilateral thrombotic occlusion of the popliteal arteries, proximal anterior tibial arteries, and tibioperoneal trunks. Arterial pulse returned in both lower limbs after 6 h of heparin initiation. The patient was discharged on postoperative day 26 without any sequelae.

Due to immobility and systemic hypercoagulability, surgery is a risk factor for venous thrombosis[4]. To reduce this preventable complication during surgery, patients scheduled for high-risk surgical procedures, such as major orthopedic, general, gynecological, urological, vascular, and neurological surgeries, are recommended to undergo thromboprophylaxis after a risk and benefit assessment[6,7]. In contrast, until recently, surgery has rarely been considered a risk factor for arterial thrombosis[4]. Recent studies have suggested that venous and arterial thromboses share many common risk factors and have a bidirectional relationship[4,5]. Therefore, there is a growing interest in the risk of arterial thrombosis after surgery. Herein, we report a case of acute bilateral lower extremity arterial thromboses that developed after intraocular foreign body removal under general anesthesia. A relevant literature review was also conducted.

After an accident at a construction site, in which a 3 mm iron particle entered the patient’s left eye, the patient was hospitalized for foreign body removal surgery. Physical examination immediately after admission revealed no abnormal findings, except for the left eye injury. The patient did not complain of any discomfort in either leg. Preoperative electrocardiogram (ECG), chest radiography, and laboratory findings were unremarkable (Table 1). In the operating room, standard monitoring (ECG, pulse oximetry, noninvasive blood pressure, end-tidal CO2 (EtCO2), and esophageal stethoscope temperature measurement) was performed; the patient’s initial (pre-induction) heart rate (HR), oxygen saturation (SpO2), systolic blood pressure (SBP), diastolic blood pressure (DBP), EtCO2, and respiratory rate (RR) were 60 beats/min, 100%, 179 mmHg, 78 mmHg, 30 mmHg, and 20 breaths/min, respectively. The vital signs and drugs used during the surgery are shown in Figure 1. The surgery lasted 4 h and 45 min and included phacoemulsification, vitrectomy, intraocular foreign body removal, endolaser photocoagulation, and fluid-air exchange. During surgery, the patient was in a supine position without restraints, and graduated compression stockings or intermittent pneumatic compression devices were not used. Immediately after emergence from general anesthesia, the patient complained of extreme pain in both legs. 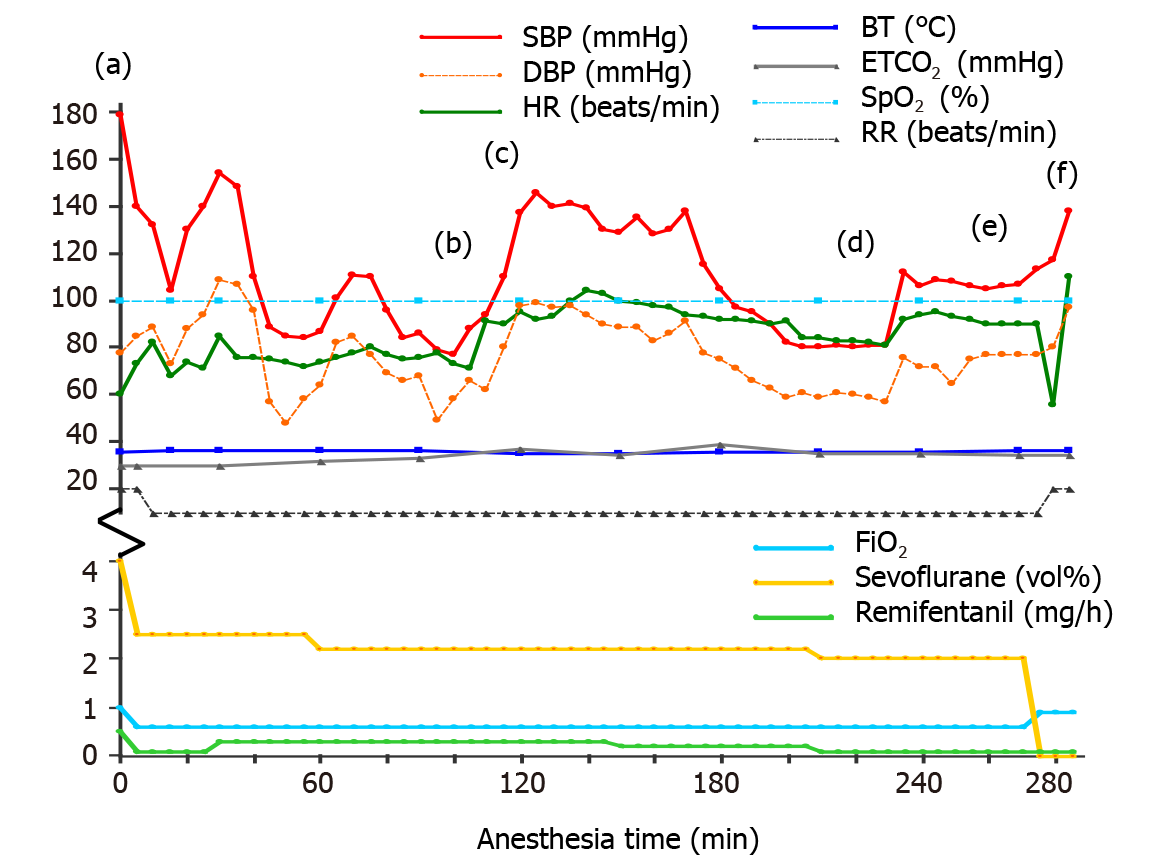 Although the patient was diagnosed with hypertension > 10 years earlier (baseline SBP/DBP, 160-180/100-78 mmHg), he had voluntarily not taken antihypertensive medication for years. He also had varicose veins in both legs.

The patient was a heavy-drinking smoker[8]; he would drink more than 50 g of alcohol and smoke 18 cigarettes per day. The patient had no family history of hypercoagulable disorders.

Transesophageal echocardiography revealed no structural or functional abnormalities, and there was no evidence of a cardiac embolic source. Postoperative ECG showed a normal sinus rhythm.

The patient was diagnosed with acute thrombotic occlusion of the bilateral popliteal arteries, proximal anterior tibial arteries, and tibioperoneal trunk.

After surgery, the patient was administered oxygen at the rate of 5 L/min using a nasal cannula, and the patient’s vital signs were stable, except for tachycardia caused by pain (HR, 119-125 beats/min; SpO2, 97%-100%; SBP, 110-120 mmHg; DBP, 55-80 mmHg; and RR, 15-20 breaths/min). For pain control, intravenous fentanyl 100 mcg and pethidine 25 mcg were administered immediately and 30 min after surgery, respectively. Immediately after the diagnosis was confirmed, intravenous unfractionated heparin (UFH) was administered for anticoagulation, with a bolus loading dose of 5000 units, followed by a maintenance dose of 800 units/h. After 2 h, heparin infusion was stopped, and surgical thrombectomy was planned. However, upon arrival in the operating room, that is 4 h after heparin cessation, the arterial pulse had returned in both lower limbs. Therefore, the surgery was canceled, and heparin therapy was reinitiated. Lipo-prostaglandin E1, a potent vasodilator and platelet aggregation inhibitor, was administered as an adjuvant treatment[10]. After 10 h of heparin reinitiation, the patient had hematochezia with a total volume of approximately 500 mL. Heparin infusion was immediately stopped, and the patient was closely monitored. The patient’s vital signs remained stable (HR: 74-92 beats/min; SpO2: 97%-99%; SBP: 120-140 mmHg; DBP: 80-82 mmHg; and RR: 20-21 breaths/min). Due to the repeated heparin infusion and discontinuation, activated partial thromboplastin time (aPTT) monitoring was not performed. Emergency sigmoidoscopy and esophagogastroduodenoscopy revealed no ischemic lesions or obvious sources of bleeding. Eight hours after the discontinuation of heparin, the aPTT level normalized, and hematochezia disappeared. The results of the laboratory tests after hematochezia are summarized in Table 1. No definite bleeding focus was noted on follow-up abdominal CT, gastroduodenoscopy, and sigmoidoscopy performed on postoperative days (PODs) 3, 5, and 7, respectively.

Although myoglobinuria was absent, the patient’s history, symptoms, and markedly elevated myoglobin and CK levels strongly suggested rhabdomyolysis. Hydration was performed for kidney protection, and serial ECG monitoring and laboratory tests were performed. No specific ECG abnormalities were found immediately after surgery and on PODs 1-3. The serial laboratory results are summarized in Table 1. Myoglobin and CK levels normalized at POD 3 and 11 (37.3 ng/mL and 159 U/L), respectively, and the patient recovered completely from rhabdomyolysis without any sequelae.

Immediately after surgery, the patient complained of motor weakness in both lower extremities, and the muscle strength parameters according to the expanded Medical Research Council of Great Britain grading scale[11] were as follows, right/Left: hip flexion (2/5-), hip extension (2/5-), hip abduction (2/5-), hip adduction (2/5-), knee flexion (2/5-), knee extension (2/5-), ankle dorsiflexion (3/5-), ankle plantar flexion (3/5-), great toe extension (3/5-), and great toe flexion (3/5-). To evaluate the cause of motor weakness, the ankle brachial index (ABI) was measured; the right and left ABIs were within the normal range (1.26 and 1.21, respectively). Electromyogram and nerve conduction examinations showed non-specific findings. On POD 12, lipo-prostaglandin E1 was discontinued, and beraprost (0.12 mg/d), aspirin (100 mg/d), and physical therapy were initiated. The motor function of both lower extremities gradually improved and returned to normal, and the patient was discharged on POD 26 without any sequelae. The timeline of this case is shown in Figure 3. This study was approved by the Institutional Review Board of Pusan National University Hospital, Republic of Korea (ID 2104-014-101).

The conventional literature emphasizes the difference between arterial and venous thromboses[4]. The pathophysiology of venous thrombosis has been described as Virchow’s triad, that is, stasis, hypercoagulability, and alterations in the endothelium[1,3,4]. In contrast, the pathophysiology of acute arterial thrombosis includes rupture of an atherosclerotic plaque associated with high shear rates and disruption of the endothelium[1,3,4]. Moreover, it is still recommended to treat arterial thrombosis with drugs that target platelets and venous thrombosis with drugs that target proteins of the coagulation cascade[1,4].

However, recent epidemiological studies have suggested that venous thrombosis and arterial thrombosis are closely related[4,5]. The most probable biological explanation for the link between these two types of thrombosis is that they share common cardiovascular risk factors, such as advanced age, immobility, obesity, smoking, hypertension, cancer, hormone replacement therapy, infection, major trauma, thrombophilia, and surgery[4,12,13].

The aging process involves degeneration of vessel walls, activation of the coagulation system, and a decrease in physical activity[3,4], which exponentially increase the incidence of venous and arterial thromboses[4,14]. Specifically, compared with young adults, patients aged > 40 and > 50 years are at a significantly higher risk of venous and arterial thrombosis, respectively[15,16].

Cigarette smoking generates a prothrombotic environment by increasing the arterial intima-media thickness, promoting endothelial dysfunction, and increasing platelet activation and prothrombic biomarkers[17,18]. Smoking is a particularly strong risk factor for arterial thrombosis[17,18]. However, evidence on the effect of smoking on venous thrombosis remains controversial[13]. According to a recent large-scale, population-based survey, smoking is a potential risk factor for venous thrombosis if additional risk factors are present[19].

In patients with hypertension, despite the continuous exposure of the vessel wall to high pressure, complications of hypertension are paradoxically more strongly associated with thrombosis than with hemorrhage[20,21]. In this context, hypertension has been considered the classical leading cause of arterial diseases of the heart, brain, and leg[4,22,23]. In addition, a recent meta-analysis reported that patients with hypertension are at a high risk of venous thromboembolism [odds ratio, 1.51; 95% confidence interval (CI): 1.23-1.85][13].

For venous thrombosis, varicose vein and protein S deficiency are well-documented risk factors; however, with regard to arterial thrombosis, the effects of varicose veins and protein S deficiency remain unclear[24,25]. In a retrospective cohort study using national health insurance data, Chang et al[24] found that varicose veins were significantly associated with peripheral arterial disease (adjusted hazard ratio, 1.76; 95%CI: 1.72-1.79). However, this study did not fully consider the possible confounding factors due to the inherent limitation of claims data, which necessitates further evaluation of associations between varicose veins and arterial thrombosis[24].

Surgery is an independent risk factor for venous thrombosis[28]. Surgery itself induces blood stasis, release of tissue factors, and a generalized hypercoagulable environment[3,29]. With prolonged surgical time, patients are more likely to be exposed to a prothrombic state. In a large retrospective cohort study, Kim et al[28] demonstrated that in all types of surgery, surgical duration is directly correlated with an increased likelihood of the development of venous thromboembolism. Specifically, in Kim et al[28]’s study, the longest operation duration demonstrated a 1.27-fold increase in the odds of developing venous thromboembolism (95%CI: 1.21-1.34) as compared with the average operation duration; similarly, the shortest operation showed an odds ratio of 0.86 (95%CI: 0.83-0.88). Surgical procedures could also lead to arterial thrombosis-related complications, such as stroke and myocardial infarction[3,30,31], and there has been a growing interest in the increased risk of postoperative arterial thrombotic disease[4].

Prevention is the most effective strategy for limiting the adverse consequences of thromboembolism in surgical patients[29,32]. Thromboprophylaxis includes mechanical methods, such as the use of graded compression stockings, intermittent pneumatic compression devices, and pharmacologic methods using UFH and low-molecular-weight heparin[29,32]. These thromboprophylaxis strategies were designed for venous thromboembolism; however, recent studies have demonstrated that some of these strategies, including the use of intermittent pneumatic compression devices, UFH, and low-molecular-weight heparin, are also effective against arterial thrombotic diseases[33,34].

In summary, acute bilateral lower extremity arterial thromboses can occur unexpectedly after surgery. Our results suggest that anesthesiologists should pay particular attention to patients with multiple risk factors for thrombosis, especially those undergoing lengthy or high-risk surgical procedures. Although acute arterial thrombosis of the lower limb following surgery is rare, in cases with suggestive manifestations, additional evaluation for accurate diagnosis should be performed as soon as possible to prevent complications and improve outcomes.