Abnormal systemic artery to the left lower lobe is a rare congenital abnormality characterized by anomalous communication between the systemic and pulmonary circulation. Owing to its rarity, there is limited clinical experience with respect to the diagnosis and treatment of this disease.

We report a 60-year-old man who presented with a history of hemoptysis for 20 d. Contrast-enhanced computed tomography of the chest confirmed the diagnosis of abnormal systemic artery to the left lower lobe, and surgical treatment was performed. The aberrant artery arising from the descending thoracic aorta was ligated, followed by removal of the left lower lobe. The patient showed good recovery and was discharged 6 d after the surgery. At the 1-year follow-up, the patient had recovered completely, and lung CT showed no abnormal findings.

We present a case of abnormal systemic artery to the left lower lobe that was successfully managed by surgical resection of the aberrant artery and the left lower lobe. This case report adds to the clinical experience of diagnosing and treating this rare entity.

Abnormal systemic artery to the left lower lobe (ASALLL) is a rare congenital anomaly that creates an anomalous communication between the systemic and the pulmonary circulation[1]. It is characterized by aberrant systemic arterial blood flow to the left lower lobe of the lung, which drains into the pulmonary vein[1,2]. Owing to its rarity, only a few reports have described this entity. Hemoptysis is the most common manifestation, while some patients may exhibit no symptoms; in rare cases, patients may develop fever and cough with or without expectoration[2-4]. Surgical resection or therapeutic embolization are the main treatment modalities, while some cases may require vascular reconstruction[2,5,6]. We report a senile patient with ASALLL who was successfully treated by surgical resection. In addition, we summarize the diagnosis and treatment of ASALLL based on literature review.

A 60-year-old man was admitted to our hospital in October 2019 with a chief complaint of hemoptysis in the past 20 d. There was no obvious cause of hemoptysis, and it was not accompanied by any other symptoms like chest pain, cough, expectoration or fever.

The symptoms started 20 d ago with no obvious cause of hemoptysis.

The past history was unremarkable apart from a history of appendicectomy. The patient was otherwise healthy and had no history of hypertension, diabetes mellitus, coronary heart disease or infectious disease.

The patient is a life-long non-smoker. He denied any family history of related diseases.

The general condition of the patient at presentation was good. His vital signs were normal with stable hemodynamic status. Breath sounds were clear, and no pulmonary crackles were detected on auscultation.

The laboratory parameters of the patient were almost normal. 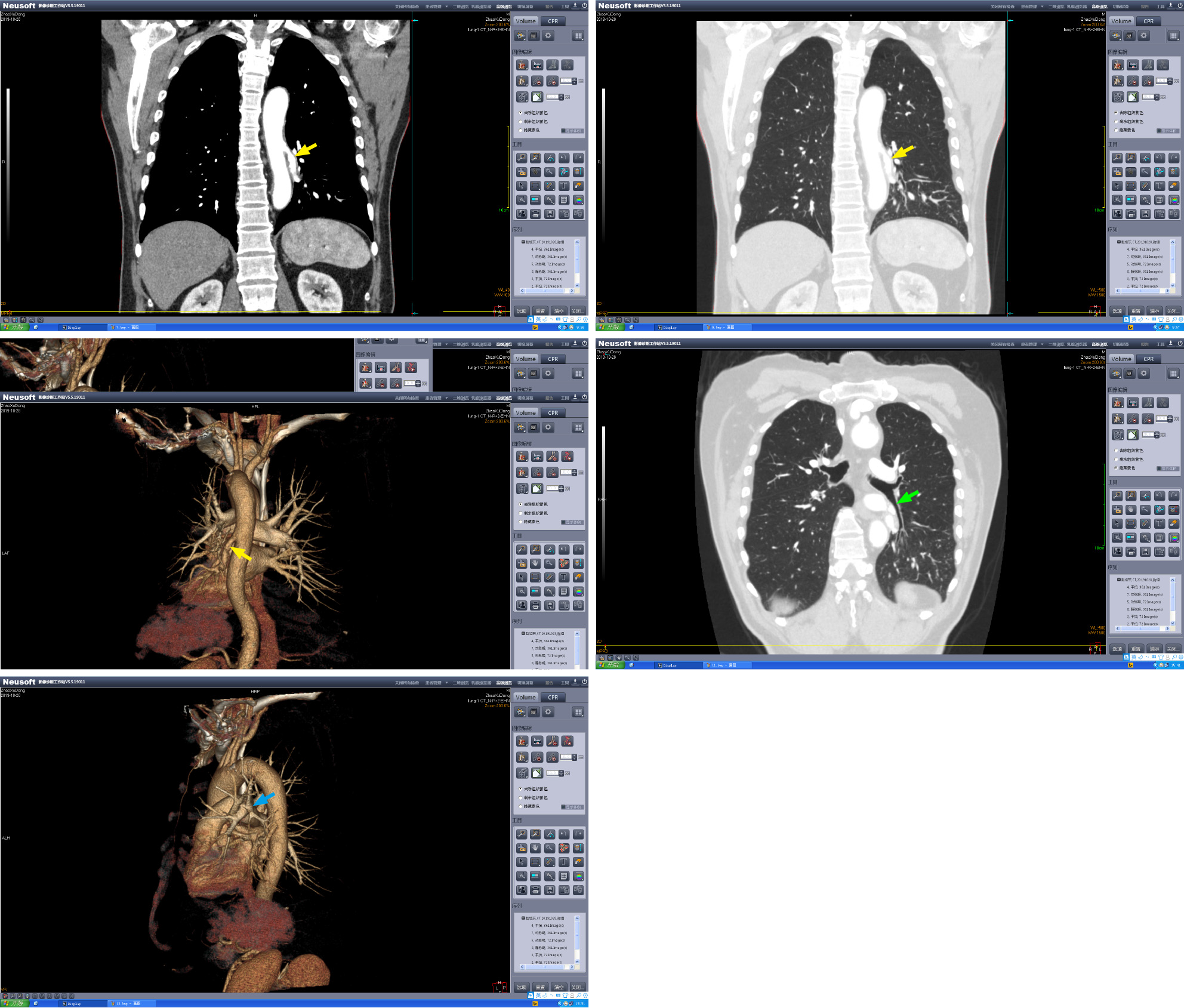 The potential differential diagnoses in this case were ASALLL and pulmonary sequestration (PS). The corresponding pulmonary artery is usually absent in ASALLL, but the bronchus is usually normally developed. PS is characterized by the absence of normal communication with the bronchial tree, which helps differentiate it from ASALLL. The final diagnosis of the presented case was ASALLL.

Routine preoperative workup did not reveal any other abnormality, and the patient underwent surgical treatment in November 2019. After general anesthesia and intubation with double lumen tube, the thoracic cavity was opened via the fifth intercostal space. An anomalous systemic artery arising from the thoracic aorta and supplying blood to the left lower lobe was identified during surgery; the anomalous artery was ligated by vascular stapler and subsequently sutured. The pulmonary artery supplying the left lower lobe was absent, while the corresponding pulmonary artery and bronchus were normal and were all sundered during the removal of the left lower lobe. The surgery was uneventful, and the thoracic cavity was closed after the placement of a closed drainage tube.

The patient showed good recovery and was discharged after removal of the drainage tube 6 d after the surgery. At the 1-year follow-up, the patient had recovered completely, and no abnormalities were detected on lung CT.

ASALLL is a rare congenital arterial malformation that is relatively more common in the Asian population[7]. Pathologically, an aberrant artery originates from the descending aorta and supplies blood to the left lower lobe. It is usually associated with the absence of the corresponding pulmonary artery, but the bronchus is normal. It is believed that insufficient blood supply to the lung tissue during embryo development stimulates the abnormal branching of the systemic artery. ASALLL needs to be differentiated from another rare congenital disease, PS, which is characterized by nonfunctional pulmonary tissue that lacks normal communication with the bronchial tree and is also supplied by a non-pulmonary systemic artery[8]. ASALLL was previously categorized as Pryce type Ⅰ pulmonary sequestration; however, this categorization was contested due to the presence of normal bronchus in the affected pulmonary tissue[4]. ASALLL also differs from PS in terms of clinical manifestations, as respiratory symptoms are more common in patients with ASALLL due to the normal communication between the involved lung tissue and the airway.

We conducted a literature search in the PubMed database for all papers written in English utilizing the search term: “Abnormal Systemic Artery to the Left Lower Lobe.” A total of 82 previous cases published since 1976 were retrieved. A summary of the 83 cases (including the present case) is presented in Table 1. Among these, 59% of patients (48 cases) manifested with hemoptysis, 8% (7 cases) with tachypnea or dyspnea, 6% (5 cases) with cough, 4% patients (3 cases) with chest pain and 33% patients (27 cases) were asymptomatic. Hemoptysis was the most commonly reported manifestation of ASALLL and was also the sole symptom in the present case.

The blood pressure in the systematic circulation is considerably higher than that in the pulmonary circulation; therefore, perfusion of pulmonary tissue by the systematic circulation can result in alveolar bleeding, leading to hemoptysis[9]. As hemoptysis can also occur in PS[10], the differentiation between ASALLL and PS relies on further investigations. Contrast-enhanced chest CT with three-dimensional reconstruction is the main modality for diagnosis of ASALLL, as it can easily delineate the aberrant artery supplying the left lower lobe[1]. However, differentiation of ASALL from PS based on CT findings can be challenging, as both conditions exhibit similar arterial malformation. In a study, the diameter of the abnormal artery of ASALLL was significantly greater than that of PS (11.88 ± 1.13 mm vs 5.96 ± 0.98 mm), which can facilitate differentiation between the two conditions on CT[11]. Moreover, patients with ASALLL commonly exhibit ground-glass opacity on CT, which is attributable to alveolar bleeding; in contrast, the typical manifestation of PS on CT scan is solid or solid-cystic mass, which is attributable to coinfection[11].

Persistent communication between the systematic circulation and the pulmonary circulation in the pulmonary tissue results in a series of consequences such as alveolar hemorrhage, increase in cardiac load and impaired oxygenation. The therapeutic goal for this disease is to correct the left-to-right shunt, which can be achieved by pulmonary lobar or segmental resection, embolism or ligation of the aberrant artery and anastomosis between the abnormal systemic artery and left pulmonary artery[2,12,13]. All these therapeutic techniques have been applied in the clinical practice. Our retrospective analysis of previous cases showed that 39% of patients underwent surgical treatment (15 cases lobectomy, 7 cases segmentectomy, 3 cases anastomosis, 2 cases ligation), 23% of patients (19 cases) were treated with embolization, and 17% of patients (14 cases) did not receive any treatment. No complications were reported in patients who underwent surgery, while 47% of patients (9 cases) who underwent embolization developed symptoms of chest pain lasting for weeks (Table 1). Some patients developed chest pain after artery embolism, which was attributable to pulmonary infarction, as identified on postoperative CT scan[14]. Inadequate tissue perfusion was also reported in patients who underwent anastomosis, which is likely attributable to the vascular damage in the aberrant artery caused by prolonged high-pressure blood flow[15,16]. Thus, anastomosis is preferred in asymptomatic pediatric patients, as these patients tend to have better vascular status and can easily endure this procedure. However, pulmonary resection or artery embolism are recommended for senile patients, especially those who present with hemoptysis[2]. Owing to the limited clinical experience with this disease, further studies are required to identify optimal treatment for this rare disease.

ASALLL is a rare congenital vascular malformation with limited knowledge about its diagnosis and treatment. Our experience in the management of ASALLL highlights the importance of contrast-enhanced computed tomography in the diagnosis of this disease. Specifically, ASALLL needs to be differentiated from PS as these two conditions require different treatment strategies. This case report adds to the clinical experience of this rare disease.