In this case report, we describe a patient with cutaneous metastatic GIST accompanied by nephrotic syndrome occurring as a malignancy-associated PNS, for whom symptomatic treatment was ineffective, but clinical remission was achieved after surgery. Moreover, the patient has a missense mutation in NPHP4, which can explain the occurrences of GIST and FSGS in this patient and indicates that the association is not random.

This is the first reported case of a GIST with cutaneous metastasis accompanied by nephrotic syndrome manifesting as a PNS.

Core Tip: This paper reports the case of patient with cutaneous metastatic gastrointestinal stromal tumor accompanied by nephrotic syndrome occurring as a malignancy-associated paraneoplastic nephritic syndromes. Moreover, the patient has a missense mutation in NPHP4. A review of other relevant cases from the literature is presented, and the potential challenges, treatment, and prognosis are discussed.

Gastrointestinal stromal tumor (GIST) is one of the most common mesenchymal neoplasms that occurs in different areas of the gastrointestinal tract. The most frequent site of GIST is the stomach (60%), followed by the small intestine (35%) and the colon and rectum (< 5%)[1]. Immunohistochemistry is helpful for the diagnosis because GISTs show immunoreactivity for CD117 (95%), CD34 (70%), and DOG1, a complementary marker to CD117[2]. GISTs are usually benign with a malignant transformation rate of 10-30%. With regard to metastatic GISTs, DeMatteo’s group[3] has previously reviewed 200 cases and reported that 61% of the metastases involved the liver, 20% involved the intraabdominal region, and 6% involved the bone. Since 2002, ten cases of cutaneous metastasis from GIST have been described, and in one report, these occurrences were estimated to represent 1% of advanced GISTs[4]. Paraneoplastic syndrome (PNS) is a disorder or symptom caused by cancer or a reaction to tumors but does not result from the local presence of cancer cells[5]. The signs and symptoms of PNS are diverse, but include some common features of PNS, such as neuropathy, skin disease, and nephrotic syndrome.

In this case report, we describe a patient with cutaneous metastatic GIST accompanied by nephrotic syndrome occurring as a malignancy-associated PNS for whom symptomatic treatment was ineffective but clinical remission was achieved after surgery. To the best of our knowledge, this is the first time that we present a unique case of cutaneous metastatic GIST accompanied by focal segmental glomerulosclerosis (FSGS) occurring as a malignancy-associated PNS.

A 64-year-old Chinese man was admitted to our hospital with edema that had persisted over 4 mo.

The patient reported edema of the face and lower limbs, particularly in the afternoon, and he had not received any special treatment for this symptom.

No other relevant history of past illness was reported.

No other relevant family history was reported.

On examination, the patient presented with multiple nodules and lumps with a smooth surface that could be seen throughout the body (Figure 1A). Enlargement of the cervical, axillary, and inguinal lymph nodes was clearly observed.

A kidney biopsy was performed and the analysis of nine glomeruli revealed one glomerulus indicative of glomerulosclerosis and one indicative of segmental glomerulosclerosis with peripheral podocytosis, vacuolation, and granular degeneration in the renal tubular epithelial cells (Figure 1B and C). These pathological findings were indicative of FSGS, not otherwise specified (NOS). Immunohistochemistry of the kidney revealed that the glomerular capillary loop, peritubular capillary, and arterioles were positive for CD34 (Figure 1D), and the proximal tubule cells were positive for CD117 (Figure 1E) but negative for DOG1. Fat degeneration and necrosis were observed in the lymph node, and no tumor metastasis was revealed (Figure 1F). Hematoxylin and eosin staining of the skin showed spindle cell tumor-like hyperplasia, which was slightly heteromorphic with focal necrosis and rarely mitotic (Figure 1G). Immunohistochemistry staining revealed that the tumor cells were positive for CD34, Bcl-2, CD99, Ki67, and vimentin but negative for smooth muscle actin (SMA) and S-100. Representative immunohistochemical staining for CD34 is shown in Figure 1H. The diagnosis was a desmoid tumor (DT) based on the above immunohistochemistry results.

Then, gastroscopy was performed and the results revealed a 0.6 cm mucosal mass that was hard to the touch, and poor mobility could be seen in the greater curvature of the stomach (Figure 2A). Several 0.4-2 cm masses were observed in the anterior wall of the middle and upper of the gastric fundus with fractured surfaces and fresh blood (Figure 2B). Moreover, pathological examination revealed the destruction of the gastric solid membrane structure and spindle cell tumor-like hyperplasia with mild dysplasia (Figure 2C), and epithelioid cells were occasionally seen with 6-8 mitotic figures/50 high power fields (Figure 2D). CD117 (Figure 2E), CD34 (Figure 2F), and SMA were positive by immunohistochemistry, and DOG1 was probably positive, and S-100 and CK were negative. These findings supported the diagnosis of GIST. Additional immunohistochemistry revealed that the skin was positive for CD117 (Figure 2G) and DOG1 (Figure 2H), the two most sensitive and specific markers for the diagnosis of GIST[6]. In addition, a heterozygous missense mutation was found in the NPHP4 gene of the patient (NPHP4: NM_015102: exon17: c.2198G>A: p.G733D), which explained the occurrence of GIST and FSGS and indicated that this was not a random association[6].

The final diagnosis of the patient presented in this case report was a metastatic cutaneous GIST.

Cyclosporine was administered in an outpatient setting for 3 d, and the discomfort of the patient was alleviated. Moreover, the patient received prednisone acetate 50 mg QD for 3 mo. After 4 mo, a partial gastrectomy was performed.

Despite receiving prednisone for 3 mo, the patient’s severe proteinuria and hypoalbuminemia did not improve. After 4 mo of follow-up, a partial gastrectomy was performed. Two weeks after the tumor was removed by surgery, the patient’s serum albumin and urinary protein levels improved remarkably (Figure 3). 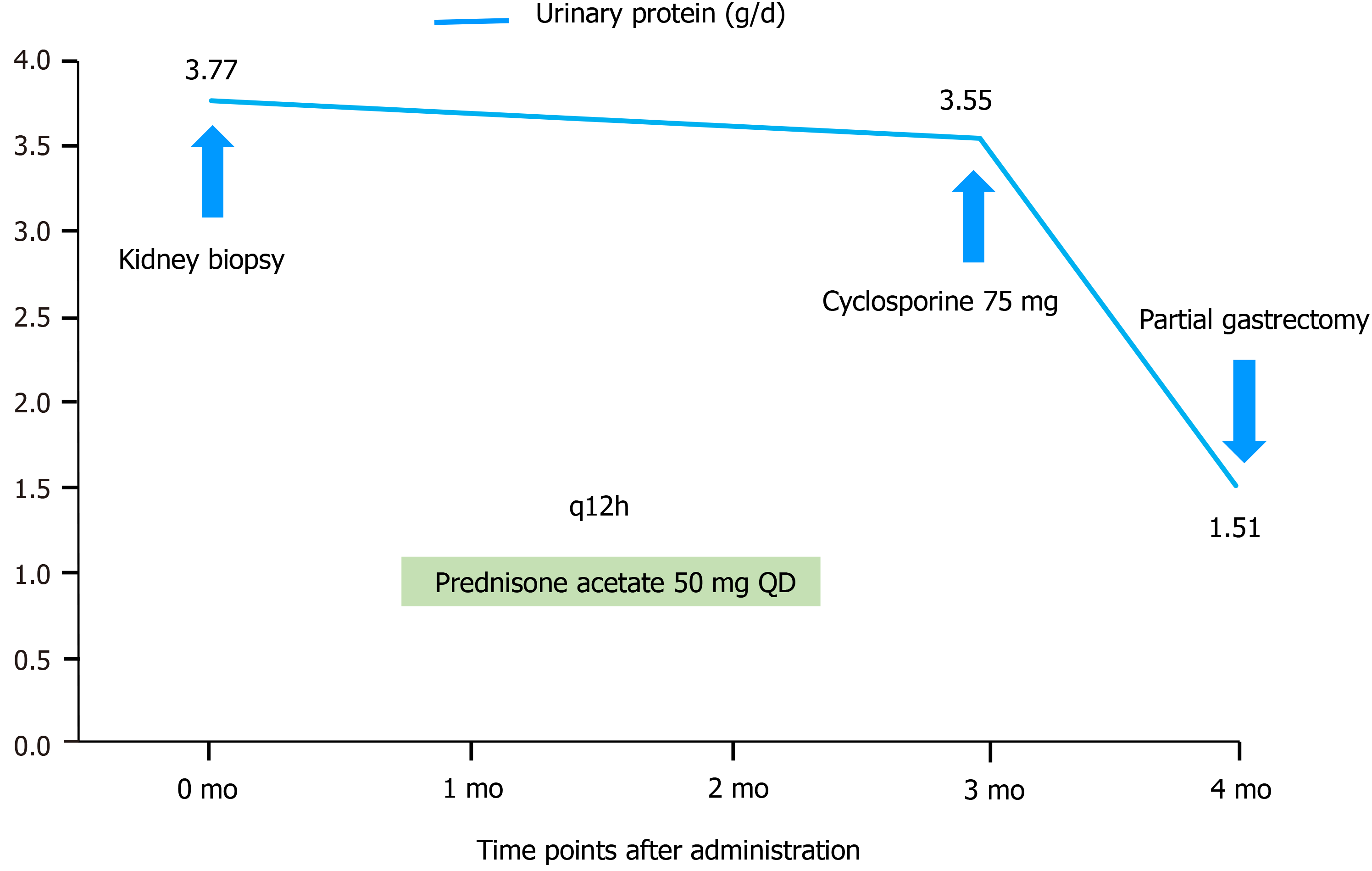 Figure 3 The patient’s clinical course. A graph of the urine protein levels after the administration is shown.
DISCUSSION

GISTs arise from the interstitial cells of Cajal, which serve as a pacemaker for the gastrointestinal tract by creating slow wave potentials that direct smooth muscle to contract. GISTs primarily metastasize to the liver and peritoneum, while cutaneous metastases are the least common. However, the mechanism of GIST metastasis to the skin remains unknown. It is hypothesized that the presence of skin metastases may indicate multiple internal metastases[3]. This patient’s disease was initially misdiagnosed as DT prior to the recognition of cutaneous metastatic GIST by assessing the expression of CD117, CD34, and DOG1 in the skin. Patients with a history of GISTs should be advised to undergo a full skin examination to detect visible clues that indicate metastatic tumor burden.

In our case, the patient had a missense mutation of NPHP4. NPHP4 is located on chromosome 1p36 and encodes nephrocystin-4/nephroretinin[7]. Nephrocystin-4 colocalizes and interacts with nephrocystins 1 and 3 in primary cilia and associated appendages, adherens junctions, and focal adhesions[8]. Individuals with mutations in NPHP4 most frequently present with nephronophthisis[9]. Some researchers have determined that NPHP4 is a negative regulator of the Hippo pathway[10]. In acute renal injury, the Hippo signaling pathway may be involved in the apoptosis of tubule epithelial cells, epithelial-mesenchymal transition, and acute renal injury progression to chronic kidney disease, among other processes[11]. In addition, the Hippo signaling pathway is involved in the development and progression of several chronic kidney diseases, including FSGS, diabetic nephropathy, and polycystic kidney disease[12]. The conserved Hippo signaling pathway regulates organ size in Drosophila melanogaster and mammals and plays an essential role in tumor suppression and cell proliferation[13]. NPHP4 is indeed a driving force of the proliferation of tumor cells. Therefore, the mutation of NPHP4 in this patient could explain the occurrence of GIST and FSGS and this was therefore not a random association.

Theoretically, the diagnosis of paraneoplastic glomerulopathy should rely on three strong criteria. First, clinical and histologic remission occurs after complete surgical removal of the tumor or chemotherapy-induced complete remission of the disease. In our patient, symptomatic treatment was ineffective but clinical remission was achieved after surgery. Therefore, the patient’s nephrotic syndrome could be diagnosed as a PNS. Second, a renal relapse accompanies the recurrence of neoplasia. In other words, proteinuria should directly correlate with tumor activity. Third, a pathophysiologic link is established between the two diseases, including the detection of tumor antigens and antitumor antibodies within subepithelial immune deposits[15]. In our patient, the immunohistochemistry of the kidney revealed positivity for CD117 and CD34, but negativity for DOG1. Telocytes (TCs) were indicated as a distinctive cell type after being previously described as “interstitial Cajal-like cells”[16]. Qi et al[17] reported TCs in the interstitium of the human kidney cortex. Renal TCs were found to express CD34 and CD117 with variable intensity[17]. Therefore, the positive CD34 and CD117 results in the kidney were not significant. Nephrotic syndrome can occur as malignancy-associated PNS, and it has been estimated that cancer occurs in 11%–22% of patients with nephrotic syndrome[5]. The most common pathological type of tumor-associated nephropathy is membranous nephropathy (44%–49%). FSGS is extremely rare among PNS patients and has been observed in association with renal cell carcinoma, invasive thymoma, and lung cancer[18]. There has been only one reported case of GIST of the stomach that was associated with nephrotic syndrome occurring as a malignancy-associated PNS. Nephrotic syndrome improves after surgery in 78% of patients[5]. Considering that cancer is a potential cause of nephrotic syndrome, surgical resection should be performed in the presence of PNS. In our case, the patient’s proteinuria and hypoalbuminemia did not respond to symptomatic treatment. After tumor removal, clinical remission of nephrotic syndrome was immediately achieved. Thus, FSGS can be considered a GIST-associated PNS. However, the variant of FSGS that has been reported in PNS is the collapsing variant, due to the overexpression of vascular endothelial growth factor, which leads to collapsing FSGS. Our patient, on the other hand, had FSGS NOS.

Some studies have indicated that α-actinin-4 mutations play an important role in the development of PNS[19]. Unfortunately, this patient did not have any ACTN4 mutations. However, these hypotheses seem insufficient to explain the occurrence of GIST accompanied by FSGS occurring as a malignancy-associated PNS. Tyrosine kinase inhibitors (TKIs) are effective for treating GISTs, but researchers have mainly focused on TKI-associated renal injury leading to FSGS. In the future, we will use cytotoxic chemotherapy for this patient with intensive follow-up. GISTs are currently regarded as potentially malignant tumors. Discrimination of benign GISTs from malignant GISTs is performed by postoperative histological analysis (tumor diameter, mitotic index, whether the tumor has metastasized, and Ki67 expression level)[20]. The diagnosis of cutaneous metastatic GIST indicates that this case represents a high-risk patient with a poor prognosis. Joensuu’s group recommended shorter imaging intervals of approximately 3-4 mo for high-risk patients during a period of approximately 2 years following discontinuation of imatinib[21]. Our patient’s risk for recurrence would be reduced by this follow-up schedule.

In conclusion, FSGS caused by cutaneous metastatic GIST is extremely rare, and to the best of our knowledge, this is the first report of such a case. The NPHP4 mutation in this case can explain that the occurrence of GISTs and FSGS was not a random association.

We thank Professor Qiu P for editing the manuscript.