Empyema is a severe complication following pneumonectomy that is associated with high morbidity and mortality rates. Although there are a wide variety of treatment options, successful management remains challenging when this condition is combined with a large cavity in very thin patients who had previously undergone a posterolateral thoracotomy.

We reported the case of a thin, 63-year-old man with a progressive pulmonary cyst who underwent left pneumonectomy via posterolateral thoracotomy 23 years ago. After an initially uneventful postoperative course, he was readmitted with empyema and a large cavity 21 years after surgery. He was successfully treated with limited thoracoplasty, followed by free vastus lateralis musculocutaneous flap transposition.

This case highlights that the treatment mode of limited thoracoplasty and free vastus lateralis musculocutaneous flap transposition is safe and effective for the management of postpneumonectomy empyema with a large cavity in thin patients who had previously undergone a posterolateral thoracotomy.

Core Tip: Empyema is a severe complication following pneumonectomy and is associated with high morbidity and mortality rates. Although there are a wide variety of treatment options, successful management remains challenging. We performed limited thoracoplasty and free vastus lateralis musculocutaneous flap transposition for postpneumonectomy empyema with a large cavity in a thin patient who had previously undergone a posterolateral thoracotomy. This treatment mode is safe and effective for such patients.

Postpneumonectomy empyema (PPE) is an uncommon but severe complication that is associated with high morbidity and mortality rates[1,2]. Although there are a wide variety of treatment options for PPE, successful management remains challenging when this condition is combined with a large empyema cavity in very thin patients who had previously undergone a posterolateral thoracotomy[2,3]. Here, we report the case of a 63-year-old man with this kind of PPE who was successfully treated with limited thoracoplasty, followed by free vastus lateralis musculocutaneous flap transposition.

A 63-year-old man was admitted to our hospital due to cough, fever, and malaise for 2 years.

The patient’s cough continued, while his fever was relieved by the administration of antibiotics and the insertion of closed thoracic drainage.

The patient had a history of a progressive pulmonary cyst and underwent left pneumonectomy via posterolateral thoracotomy 23 years prior to admission.

The patient was a nonsmoker and had no specific family history.

A physical examination showed that the patient was a very thin man, with a height of 170 cm, a weight of 45 kg and a body mass index of 15.6 kg/m2. A scarred posterolateral incision was found on the left collapsed thorax, and chest auscultation demonstrated diminished breath sounds in the left lung field (Figure 1). 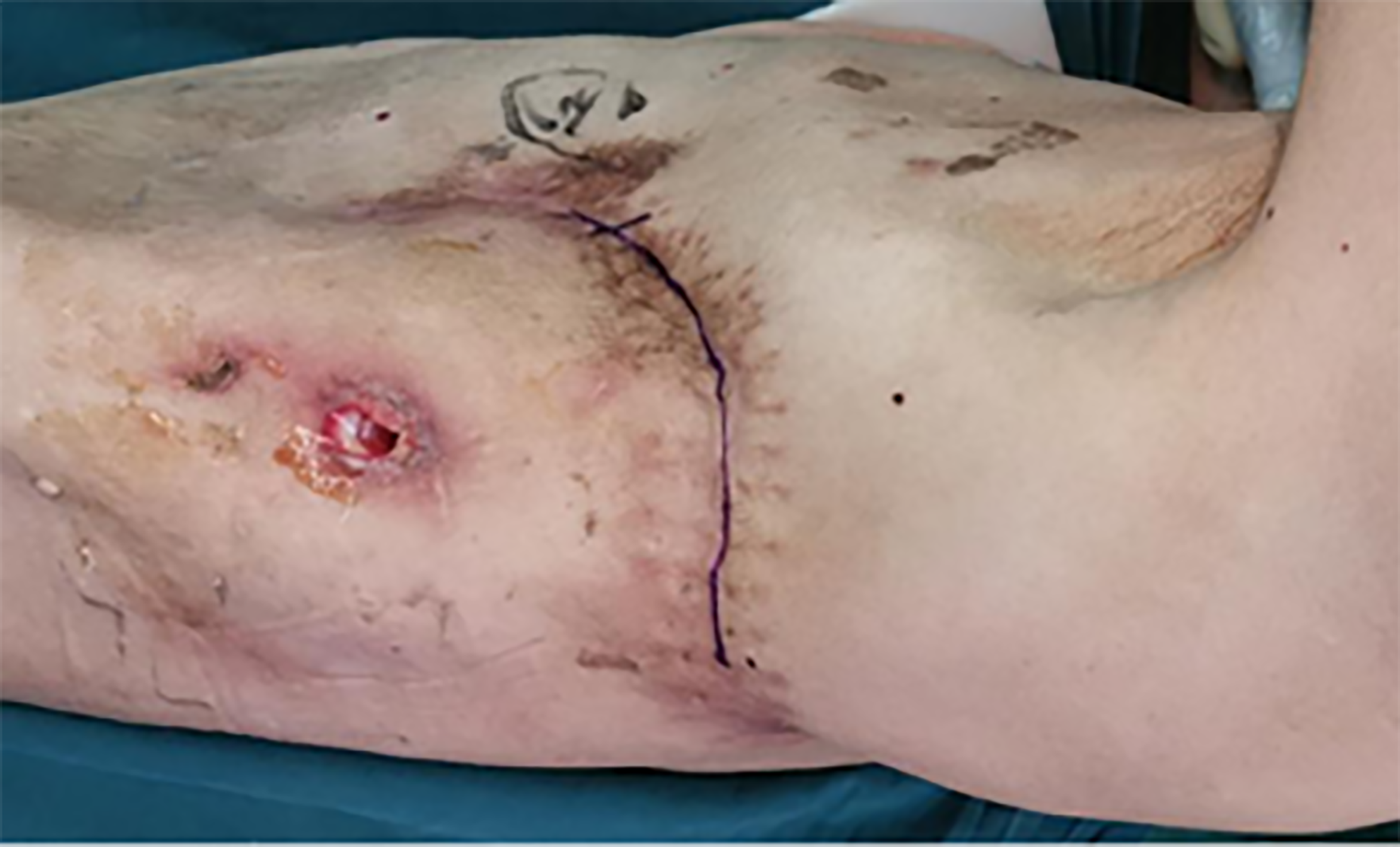 The pathogens identified via culture of the dark red pus that drained from closed thoracic tubes were Enterobacter cloacae and Proteus mirabilis.

The chest computed tomography (CT) scan revealed complete opacification of the left contracted chest (Figure 2A and B). The patient underwent bronchoscopy, which revealed an intact stump of the left mainstem bronchus. 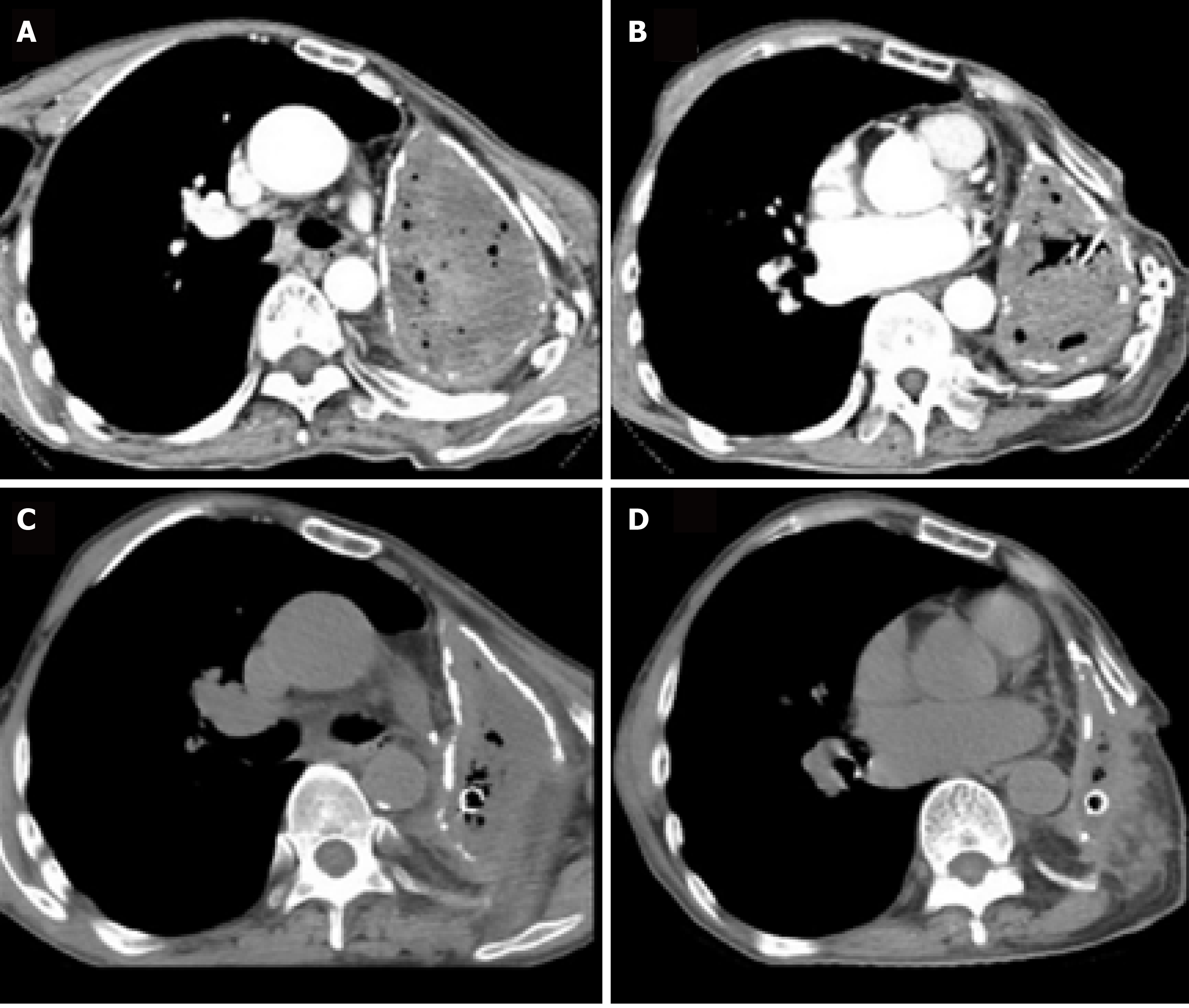 The final diagnosis was postpneumonectomy empyema.

After the patient’s condition stabilized, he underwent limited thoracoplasty via resection of the 4th-8th ribs, and two months later, the volume of the residual space of approximately 300 cm3 achieved a 50% reduction in the cavity, as measured by chest CT (Figure 2C and D). When it was conﬁrmed that there was no infection in the cavity, the patient underwent free muscle flap transposition. During this operation, residual cavity debridement was performed, and the ipsilateral thoracodorsal vessels were prepared in the upper left thorax. Then, a free vastus lateralis musculocutaneous flap was harvested from the patient’s left thigh and transferred to obliterate the residual space, and separate microvascular anastomoses were completed end to end between the pedicle vessels and the thoracodorsal vessels (Figure 3A and B). The free flap was firmly stabilized inside the space with the surrounding tissue using monofilament absorbable sutures, and the remaining skin paddle was sutured with the surface skin. 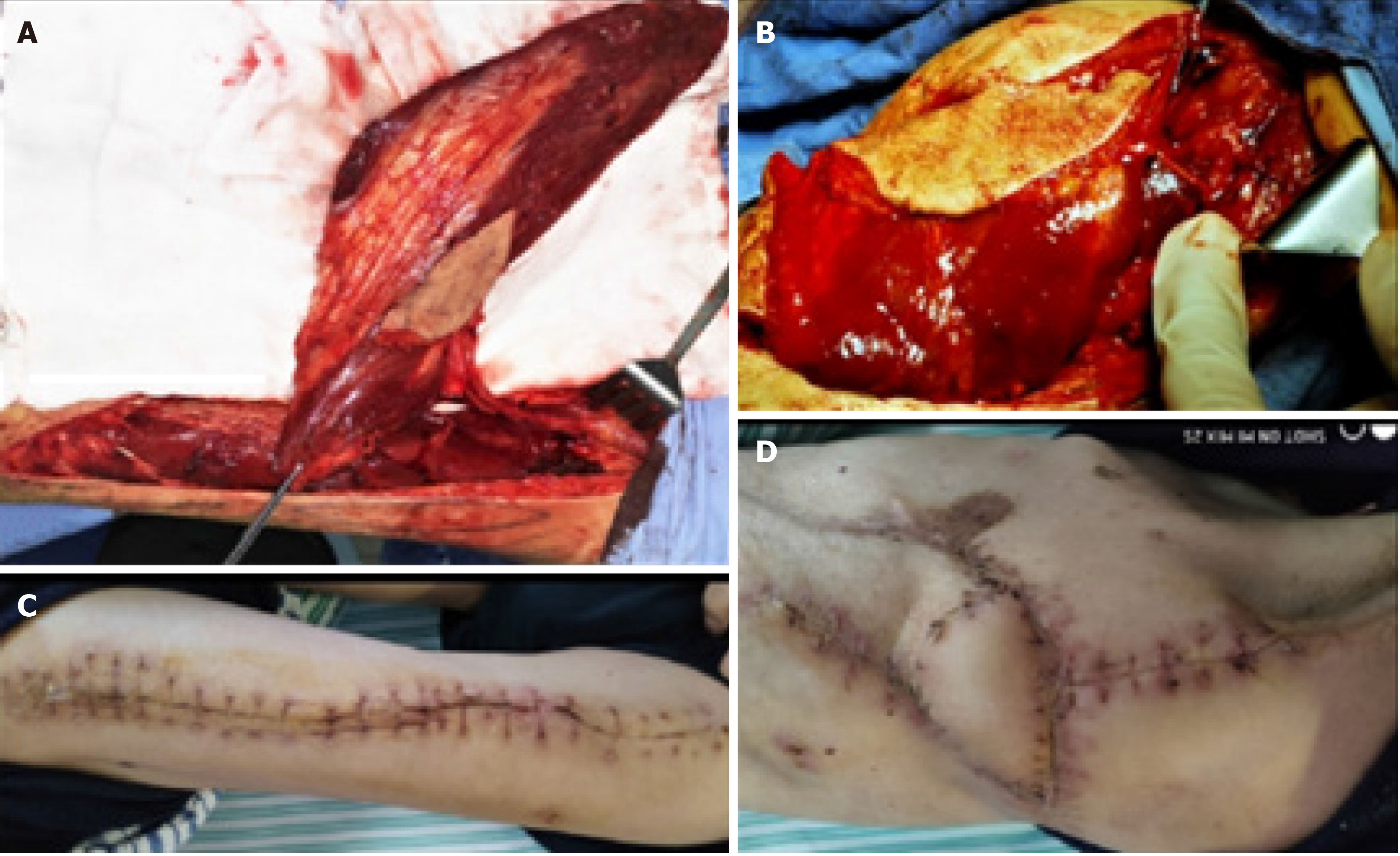 PPE is a potentially fatal postoperative complication that poses a complex challenge for thoracic surgeons[1,2]. The prevalence of PPE ranges from 2% to 16%, and both local and systemic factors have been implicated in the development of empyema[2,3]. The clinical presentation depends mainly on the presence or absence of a BPF. For patients with PPE without BPF, the onset of infection is often insidious and can occur anywhere from a few days to many years after surgery. Signs and symptoms often initially consist of low-grade fever and leukocytosis, and the mortality rate is higher than 10%. The diagnosis of PPE is usually confirmed by chest CT scans and bacteriological studies[1,2]. Our patient was diagnosed with PPE based on his symptoms, chest CT scan findings, drainage fluid and microbiology.

Once PPE has developed, there are many treatment options[1,2]. After the infection is controlled by adequate pleural drainage, obliteration of PPE may be achieved by treatment options such as antimicrobial solution, thoracoplasty, muscle and greater omentum flap transfer or a combination of these options[3-5]. A major contribution to the treatment of PPE (with or without BPF) came from Clagett and Geraci of the Mayo Clinic, who reported their landmark technique in 1963 that now bears Dr. Clagett’s name[1]. However, our patient did not undergo the Clagett procedure because his residual pleural space was very large.

Thoracoplasty has been proven to be a reliable filling procedure[3], and a rough estimate for the expected reduction of the pleural cavity with thoracoplasty is that the resection of 5 ribs results in an approximate 25% collapse, while a 7-rib thoracoplasty can achieve a 50% reduction of the cavity. However, the disadvantages of thoracoplasty reportedly include progressive scoliosis, chronic pain, and a mutilating cosmetic appearance; therefore, the procedure has become obsolete[1,3]. Currently, limited thoracoplasty can be used to reduce the pleural space volume as a surgical step for select cases, such as with our patient. A combination of limited thoracoplasty and intrathoracic muscle transposition is required to effectively obliterate this cavity[1].

Tissue flaps may be used to obliterate the pleural cavity as pedicled, free, and combination methods[4-6]. The most common pedicled muscles used are the latissimus dorsi, serratus anterior, and intercostal muscles[4]. However, for very thin patients who have previously undergone a posterolateral thoracotomy, these muscle flaps may not be sufficient to obliterate the empyema cavity because they have already been divided during the original operation, or the greater omentum may not have enough volume to obliterate the cavity unless an open window thoracostomy is performed[4,5]. In this situation, a free musculocutaneous flap, such as a vastus lateralis, could be harvested and transposed to completely obliterate the cavity after the pleural cavity is reduced by limited thoracoplasty[6]. During the operation, the descending branches of the lateral circumflex femoral artery and two accompanying veins functioning as nutrient vessels underwent separate microvascular anastomoses end to end to the ipsilateral thoracodorsal vessels by interrupted suture. After completion of the microvascular anastomosis, the free flap was firmly stabilized inside the space with the surrounding tissue using monofilament absorbable sutures, and the remaining skin paddle was sutured with the surface skin[6]. This free muscle flap may easily obliterate the pleural space, as the volume was reduced by half at two months after limited thoracoplasty. At 15 mo after surgery, the patient had recovered well without any recurrence.

In conclusion, limited thoracoplasty and free muscle flap transposition are effective management methods for PPE in thin patients who have a large cavity.