Research Domain of This Article
Cardiac and Cardiovascular Systems

Thrombotic thrombocytopenic purpura (TTP) is a thrombotic microangiopathy characterized by the pentad of hemolytic anemia, fever, thrombocytopenia, renal failure, and neurological dysfunction. The formation of microthrombi in the arterioles and capillaries of various organs is one of the main pathophysiological mechanisms. Clinical manifestations of cardiac involvement in TTP patients are variable. Acute myocardial infarction has been reported as a complication with TTP as the secondary thrombotic event. Its emergence as the initial thrombotic event is extremely rare.

Core Tip: Physicians should be vigilant regarding the possible diagnosis of thrombotic thrombocytopenic purpura when identifying multiple thrombotic sites in the context of an acute myocardial infarction associated with thrombocytopenia. At the moment of diagnosis, plasma exchange with fresh frozen plasma replacement and immunosuppression with corticosteroids should be considered. The prognosis is severe.

Thrombotic thrombocytopenic purpura (TTP) is a thrombotic microangiopathy characterized by the pentad of hemolytic anemia, fever, thrombocytopenia, renal failure, and neurological dysfunction. TTP affects any organ in the body as a consequence of the thromboses in terminal arterioles and capillaries. The formation of microthrombi in the arterioles and capillaries of various organs is one of the main pathophysiological mechanisms. In adults, the condition is most often immune-mediated TTP (iTTP), can be lethal without prompt diagnosis and treatment, and occurs more often in women. Congenital TTP is often detected in childhood or during pregnancy[1].

The center of TTP pathophysiology is a defect of a disintegrin and metalloproteinase with a thrombospondin type 1 motif member 13 (ADAMTS13). It can can be inherited or most commonly appears as a consequence of the development of an autoantibody (deficiency can be induced even by a small amount of anti-ADAMTS13 autoantibodies). African ancestry and female sex predispose to the development of antibodies. In TTP there is a polyclonal immune response as autoantibodies against all domains of ADAMTS13 have been found[2,3].

ADAMTS13 is an enzyme synthesized in hepatic stellate cells whose function is to regulate von Willebrand factor (VWF) multimers. VWF, secreted by platelets and endothelial cells, is in a globular state. Proteolytic activity of ADAMTS13 on VWF is dependent on the conformational change of both proteins[3,4]. The proteolysis process reduces VWF multimer size and its hemostatic function, which leads to platelet adhesion to the endothelium, platelet activation, and consequently the formation of a platelet plug[5]. When severe ADAMTS13 deficiency (< 10%) is present, ultra large VWF multimers can accumulate, which leads to unregulated platelet adhesion and aggregation, resulting in TTP with disseminated microthrombi. An ADAMTS13 activity lower than 3% correlates with earlier age of disease onset, need for prophylactic plasma infusions, and an annual event rate > 1. To induce the clinical syndrome, a severe ADAMTS13 deficiency alone is not sufficient, and activation of the complement system has also been suggested to play a role in acute TTP. An association between complement activation and an increased mortality from an acute TTP episode has also been reported[6,7]. The circulating red blood cells are subjected to increased shear stress, which leads to anemia and schistocyte formation through damaging their membranes[8]. The majority of anti-ADAMTS13 autoantibodies are IgG, followed by IgA and IgM (up to 20% of cases). High IgA antibody titers are reported to be associated with lower platelet counts, increased mortality, and a worse prognosis in patients with TTP[9,10].

The annual incidence is 1.5 up to 6 cases per million per year in adults, and approximately 90% of the cases develop in adulthood (immune-mediated). African Americans have an approximately 8-fold increased incidence rate of TTP[11]. Women are two to three times more likely to develop iTTP. The prevalence of congenital TTP is uncertain and though further studies are needed, experts estimate it to be 0.5-2 cases per million. Certain pathogens such as Influenza A, Helicobacter pylori, Legionella, hepatitis C virus or human immunodeficiency virus may evoke an immune response and hence may lead to iTTP, although further studies are needed[12-16].

The clinical presentation is characterized by the pentad of hemolytic anemia, fever, thrombocytopenia, renal failure, and neurological dysfunction. Less than 10% of patients with acute TTP present with the pentad described previously[17]. The presence of thrombocytopenia and microangiopathic hemolytic anemia alone, without an alternative explanation, should determine us to seriously take into consideration the diagnosis of TTP. Signs and symptoms of organ ischemia due to microthrombi formation are variable at presentation, neurological manifestations being the most common, which range from mild confusion or altered sensorium, stroke, or even coma (up to 60% of the patients)[18,19]. Hematuria and proteinuria are the most commonly seen renal manifestations (creatinine is usually below 2 mg/dL). Abdominal pain, nausea, or diarrhea are clinical manifestations of gastrointestinal ischemia[20-22].

Clinical manifestations of cardiac involvement in TTP patients are variable and can be seen at any age. Patients can develop acute myocardial infarction (AMI) as a secondary thrombotic event as well as tachyarrhythmias, heart failure, cardiogenic shock, or even sudden cardiac death. Myocardial ischemia is present in less than 25% of acute TTP patients and is characterized usually by elevated cardiac troponin I measurements[17,18]. These patients require a multidisciplinary “Heart Team” approach especially regarding therapy management. Therapy-related thrombocytopenia or renal damage after percutaneous coronary intervention as well as hemorrhagic complications due to antiplatelet drugs and heparin are some of the challenges faced in the therapy management of patients with TTP and AMI[17].

The diagnosis is confirmed by a severe deficiency (< 10%) of ADAMTS13 activity. Undetectable haptoglobin concentration, an elevated reticulocyte count or total bilirubin (especially unconjugated), and an elevated lactate dehydrogenase level, a marker for both red cell destruction and organ ischemia, can be found in the biological profile of patients with TTP. Coombs’ testing is frequently negative, and coagulation parameters are not severely affected[1,22].

Treatment should be immediately initiated in patients with suspected TTP, being known the proportional relation with the poor prognosis suggested by high mortality and morbidity rates. Plasma exchange with fresh frozen plasma replacement and immunosuppression with corticosteroids represent the first-line therapy[23]. Immunosuppression targeting ADAMTS13 autoantibodies with the humanized anti-CD20 monoclonal antibody rituximab is frequently added to the initial therapy, as well as splenectomy can be considered. Novel agents, such as recombinant ADAMTS13, show promise for the treatment of TTP. Long-term follow-up after the acute episode is critical to monitor for relapse and to diagnose and manage chronic sequelae of this disease[1,24].

This patient declared no smoking or alcohol history or any other noteworthy family medical history.

The heart sounds were tachycardic without any pathological murmurs. The left leg was cold and cyanotic, with no palpable pulse of the dorsalis pedis and posterior tibial arteries but with preserved sensibility and active movements.

Troponin I and creatine kinase-MB levels were elevated. Severe thrombocytopenia, anemia and elevated D-dimers were also present. The blood urea nitrogen level was elevated. Summary of laboratory data are shown in Table 1. The laboratory data included serological testing for markers of hepatitis B infection, human immunodeficiency virus status as well as hepatitis C virus. The results were negative, and thus we excluded a viral causative agent of TTP. We also performed specific tests for some of the most common bacteria cited in the literature such as Brucella melitensis, Campylobacter jejuni, Chlamydia pneumoniae, Legionella pneumophila, Mycobacterium tuberculosis, Mycoplasma pneumoniae and Salmonella typhi, all results being negative. Unfortunately, testing for Arcanobacterium pyogenes could not be performed. The electrocardiogram showed sinus tachycardia with marked ST-elevation and Q waves in DI and aVL and r waves in V1-V3.

Transthoracic echocardiography depicted a mildly hypertrophied left ventricle (LV), with akinesia of the apical third of the interventricular septum, the apex, and the antero-lateral wall. The LV function was moderately depressed, with an ejection fraction of 40%. The apex was occupied by two thrombi, one adherent, 15/18 mm, and the other one very mobile, tongue-shaped, 18/9 mm (Figure 1). 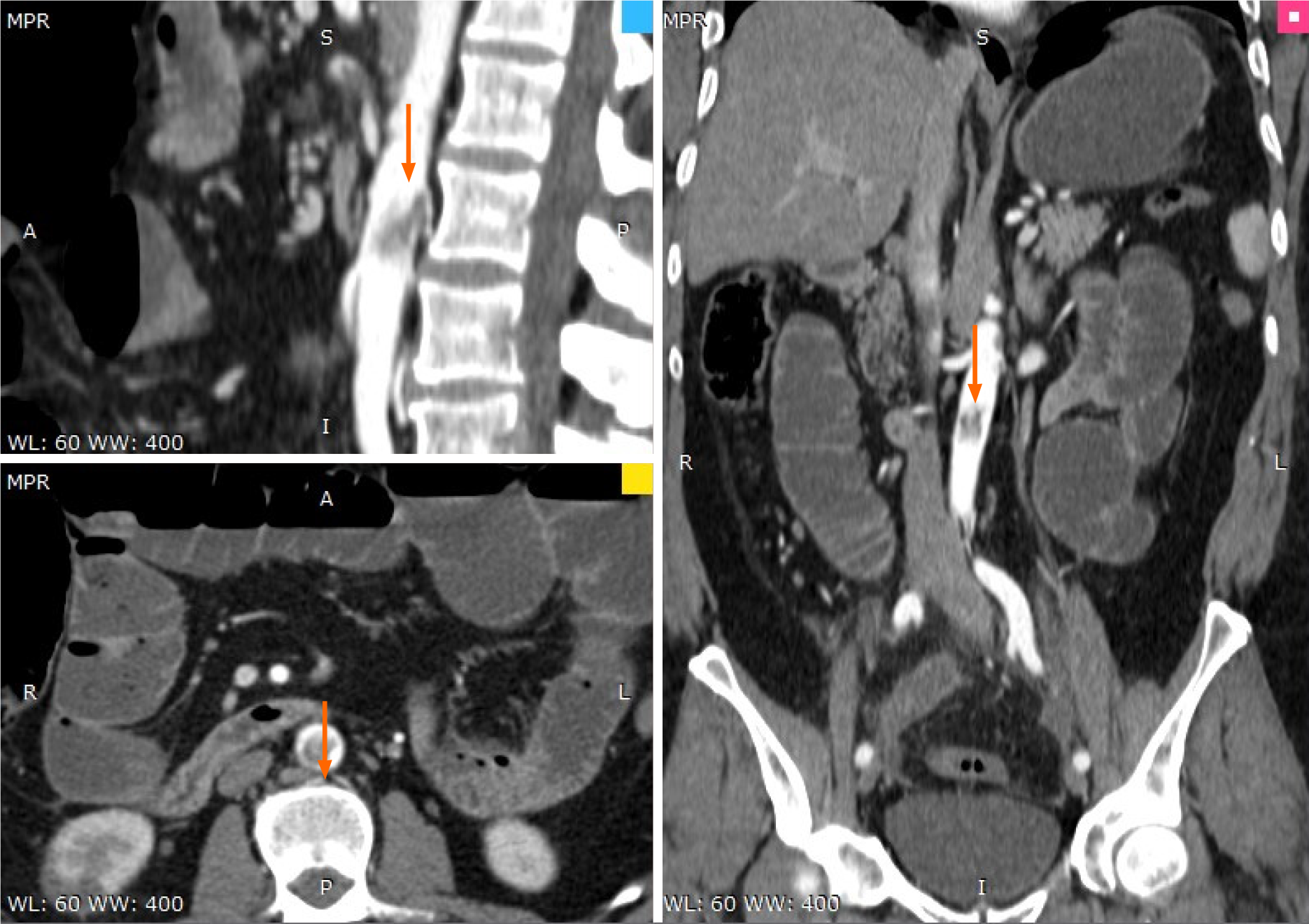 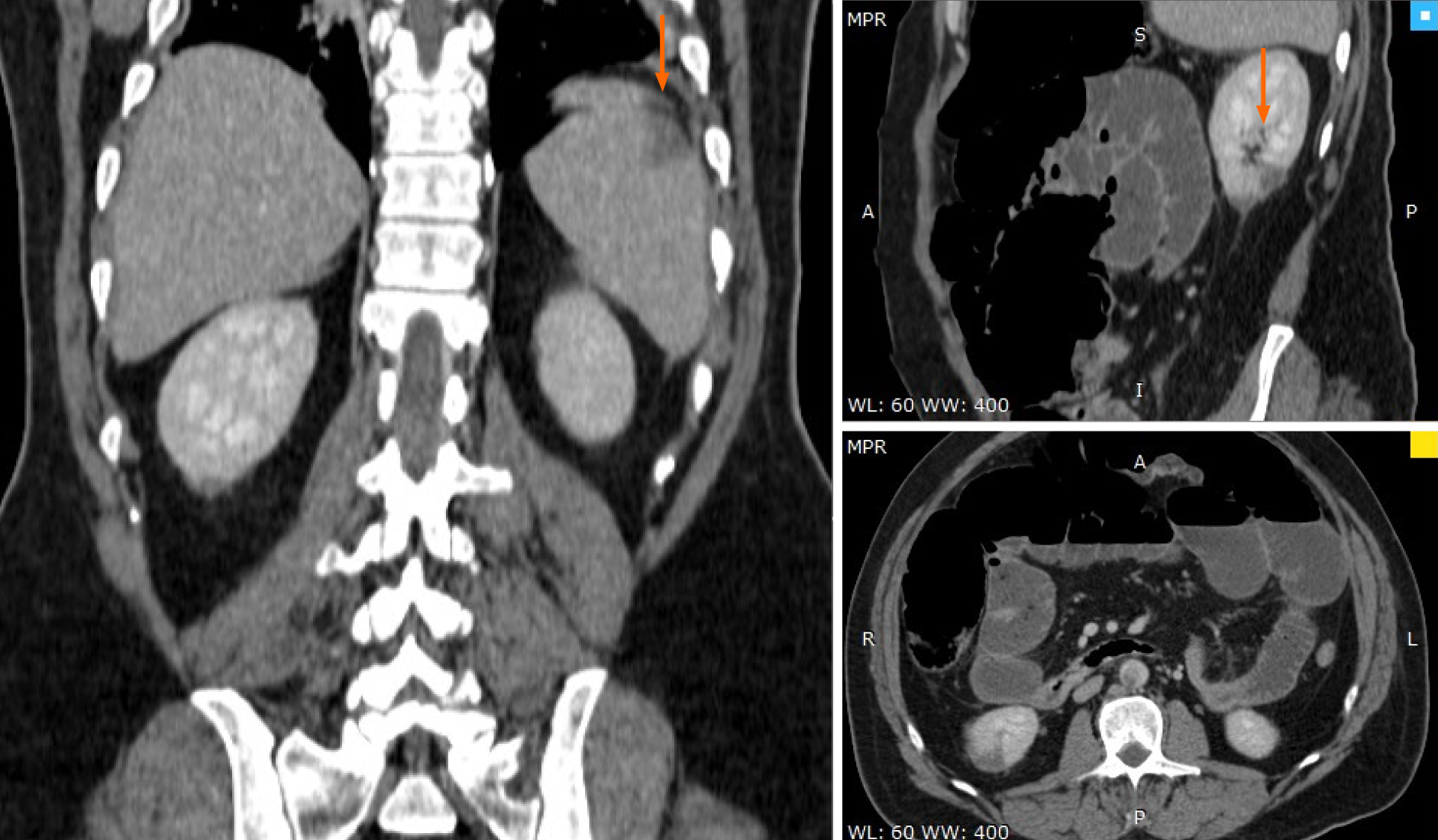 Corticosteroids were started promptly, and the patient was addressed for surgery as he developed acute abdominal pain. After an initial stabilization of the hematological profile, the patient was operated for necrotic bowel resection (enterectomy, end ileostomy, drainage, Figure 5) as well as a popliteal artery embolectomy. 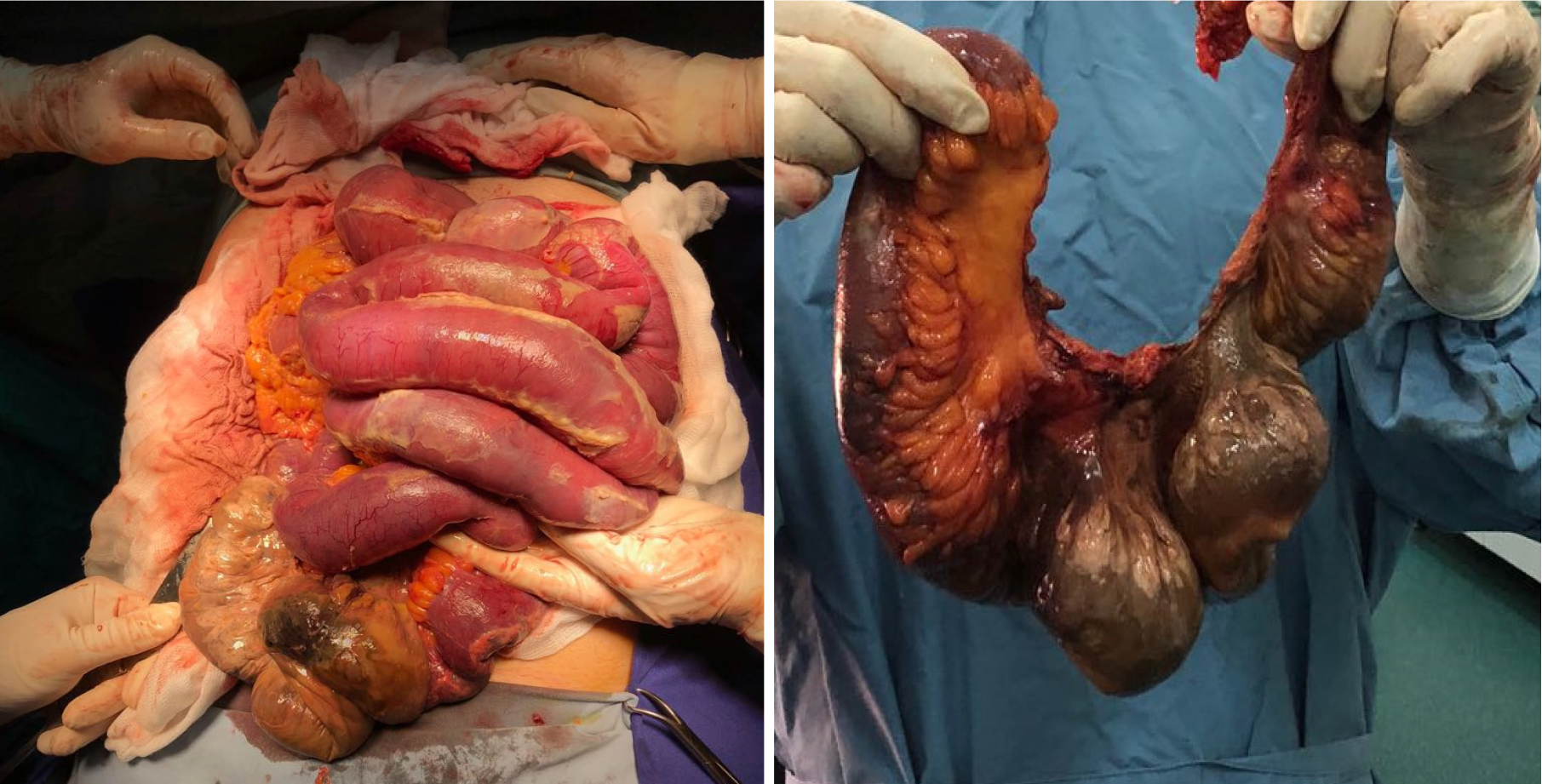 The patient died soon after the surgical intervention due to multiple organ failure. None of the diagnostic workup tests proved any specific form of hereditary coagulopathy.

TTP commonly affects solid organs and is characterized by the formation of platelet or fibrin thrombi within small blood vessels, which cause laboratory abnormalities and can lead to multiple organ dysfunction. Cardiac ischemic events increase the risk of mortality in patients with TTP as the mortality rate for AMI with TTP has been reported to be 38%-50%. Due to severe thrombocytopenia and renal failure coexistent at the time of diagnosis, a cardiac catheterization sometimes cannot be performed. TTP that presented with AMI as the initial clinical presentation has been extremely rare[1].

In our case, AMI was diagnosed by typical electrocardiogram and echocardiography changes, increased serum cardiac troponin I levels, and clinical symptomatology. Chest discomfort may not be as alarming as other clinical manifestations of acute TTP (such as overt bleeding and stroke), but we must take into consideration that these patients are sometimes unable to give a complete history due to neurological manifestations of TTP such as disorientation or aphasia.

We took into consideration the presence of disseminated intravascular coagulation (DIC) due to cardiac dysfunction with intracardiac thrombi. The frequency of DIC is higher than that of TTP. Both DIC and TTP cause microvascular thrombosis associated with thrombocytopenia, bleeding tendency, and organ failure[25,26]. Although DIC and TTP are similar in appearance, fibrinolysis and platelet systems are activated in DIC, and only platelets are markedly activated in patients with TTP. On review of the literature regarding DIC associated with heart failure, an important percentage of those patients had a history of myocardial infarction with LV thrombus[23,27,28]. Most of the DIC-related thrombi tend to be small, short lived, and highly susceptible to fibrinolysis[28]. Solomon et al[29] proposed that disruption of the normal flow pattern in the LV cavity over a large (more than 1 cm in diameter) intraventricular thrombus results in damage to red blood cells, monocytes, and platelets, with activation of coagulation and widespread dispersion of activated coagulation factors[29-31].

We also considered the differential diagnosis with thrombophilia, but the specific serological tests were negative. We ruled out infectious and rheumatological causes, and thus we concluded towards iTTP.

The management of patients with TTP requires a multidisciplinary approach especially regarding therapy management as thrombocytopenia, thrombotic and/or bleeding events, or renal damage can be common with treatments for AMI. Cardiac involvement in TTP patients is a rare but high risk feature of the disease, and in conjunction with other vascular thrombotic determinants the evolution is rapidly progressive with an unfavorable prognosis.