Pulsatile tinnitus (PT) is an annoying sound that can be eliminated with targeted treatment of the cause. However, the causes of PT have not been fully elucidated.

A 38-year-old woman with right-sided objective PT underwent preoperative computed tomography arteriography and venography (CTA/V). A 3.8 mm vine diploic vein (DV), which passed through the mastoid air cells posteriorly in a dehiscent canal and was continuous with the transverse-sigmoid sinus, was thought to be the causative finding. Four-dimensional flow magnetic resonance (4D flow MR) imaging showed that the blood in the DV flowed toward the transverse-sigmoid sinus. The closer the blood was to the transverse-sigmoid sinus, the higher the velocity. No vortex or turbulence was found in the DV or adjacent transverse sinus. The sound was eliminated immediately after ligation of the DV with no recurrence during a three-month follow-up. No flow signal of the DV was noted on postoperative 4D flow MR.

A DV may be a treatable cause of PT. CTA/V and 4D flow MR could be utilized to determine the morphological and hemodynamic characteristics of the DV.

Core Tip: This case reports a diploic vein (DV) as a treatable cause of pulsatile tinnitus (PT), which was confirmed by ligation. Thorough examinations, such as computed tomography angiography, magnetic resonance (MR) including four-dimensional flow and digital subtraction angiography, were performed preoperatively to assess the possible venous, arterial and neoplastic causes of the PT; and four-dimensional flow MR was re-examined to show the hemodynamic changes two weeks after ligation. We analyzed the manifestations of the DV, discussed the common features of venous PT in combination with our previous work and the literature, and proposed a potentially efficient diagnosis and treatment strategy for venous PT.

Pulsatile tinnitus (PT) mostly presents as a pulse-synchronous annoying sound. The long-term presence of this sound severely affects a patient’s quality of life and may lead to both functional and structural brain changes[1]. Various causes have been reported. Some of these causes were confirmed by surgeries while others were only presented as case-control observations. The detection rate of the causes of PT varies greatly, which is mainly attributable to both different examination strategies and subjective knowledge about PT. After clinical and radiological evaluations, a considerable number of patients were classified as idiopathic, meaning targeted treatment could not be performed.

Diploic veins (DVs) are valveless channels with a single epithelial layer coursing through the diploic space of the calvaria[2]. Their sizes and patterns vary greatly among individuals. The pathophysiological roles of DVs have not yet been well recognized. Several conditions, including reabsorption of cerebrospinal fluid, acute subdural hematoma, thrombosis, arteriovenous fistulas, intracranial and external communicating infections and cancer metastases, have been reported to be related to DV[3].

We herein report a large vine DV as a treatable cause of PT, which was confirmed by ligation. Thorough examinations, including computed tomography arteriography and venography (CTA/V), four-dimensional flow magnetic resonance (4D flow MR) and digital subtraction angiography (DSA), were performed. We analyzed the characteristics of DVs, discussed the common features of venous PT combined with our previous work and the literature, and proposed a potentially efficient diagnosis and treatment strategy for venous PT.

A 38-year-old woman presented persistent right-side PT without any obvious trigger or cause, which affected her nighttime sleep. This sound could be heard by herself and others, and it was synchronous with her heartbeat.

The symptoms had been present for 2 years. There was no previous history of ear lesions or hearing loss.

The patient was in good health with no history of trauma, hypertension, hyperthyroidism, temporomandibular joint disorders or a patulous eustachian tube.

Her family history was unremarkable.

Physical examination revealed that the PT temporarily disappeared when compressing the right jugular vein, hinting that the PT was likely to be produced by venous anomalies. In addition, there were no abnormal results found by otoscopy, pure tone audiometry, tympanometry, acoustic stapedius reflex or tubomanometry.

All laboratory examinations were within the normal range.

CTA/V was performed according to our previous study[4] while 4D flow MR was performed according to Li et al[5]. Computed tomography (CT), magnetic resonance (MR) and DSA all showed a dilated vine DV on the symptomatic side, coursing from the parietal region toward the junction of the transverse sinus and sigmoid sinus (Figures 1-3). The maximum diameter of the DV was 3.8 mm. CT showed that the caudal DV passed through the mastoid air cells posteriorly in a dehiscent canal, which resulted in direct communication between the DV and the mastoid air cells. No other obvious abnormalities associated with PT were found. 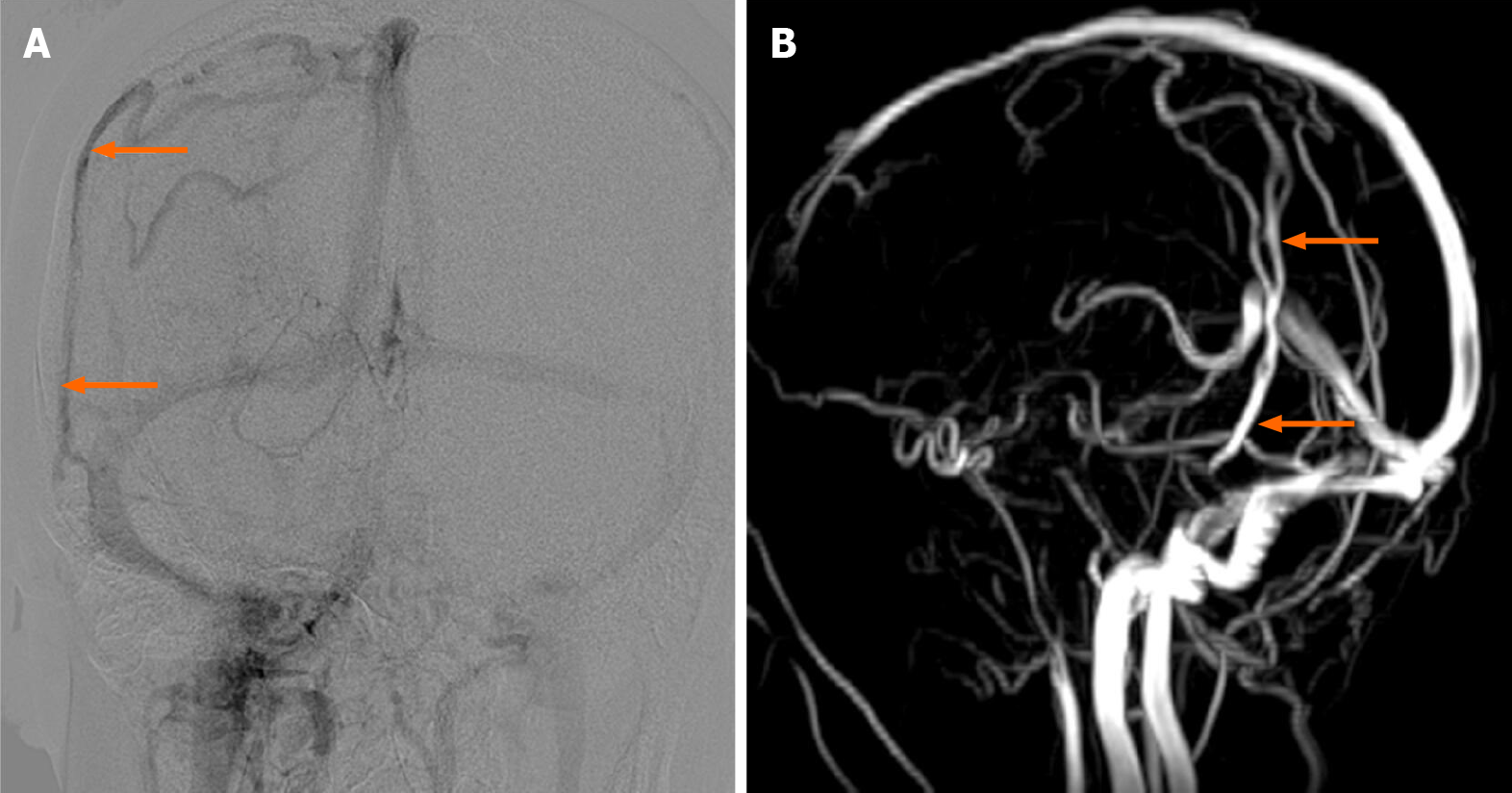 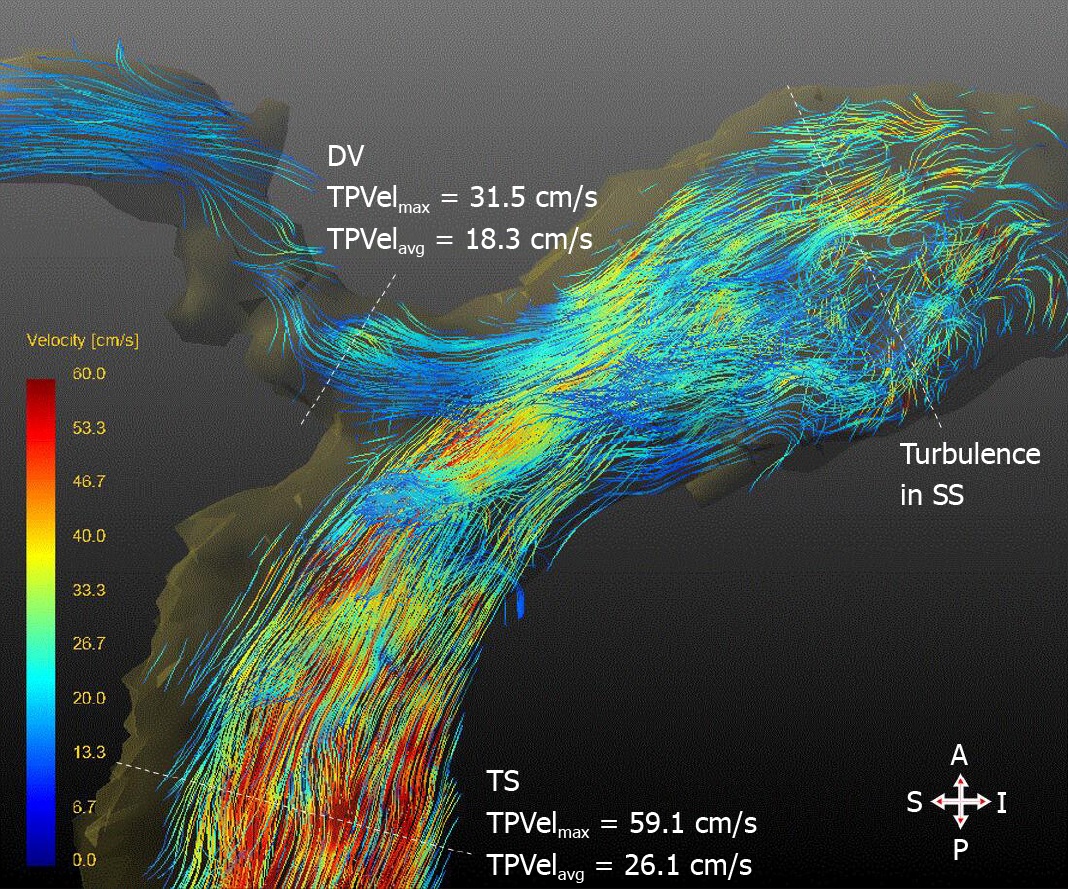 Imaging examinations (CTV, 4D flow MR and DSA) were used to confirm the etiology of PT, visualize the blood flow and quantify the flow velocity.

The responsible lesions should be found, and the patient should undergo treatment with DV ligation.

The patient underwent surgery using a trans-mastoid approach to ligate the DV. In short, under general anesthesia, a postauricular incision and a pedicle myoperiosteal flap were performed to expose the mastoid cortex and subsequently harvest the temporalis fascia. Then, we partially opened the mastoid and skeletonized the sigmoid sinus to expose the area around the transverse-sigmoid sinus junction where the DV flowed into the anterior wall of the sigmoid sinus according to the CT/MR/DSA findings. During this step, autologous bone powders were collected. Once the DV was confirmed, bipolar coagulation was used to ligate it (Figure 4). Then, the temporalis fascia and the autologous powders were used to repair the bony defect where the DV joined the transverse-sigmoid sinus, and a medical adhesive (FAL, Beijing Fuaile Co., Beijing, China) was used to keep them fixed, followed by the pedicle myoperiosteal flap covering the opened mastoid. Then, a compressive mastoid dressing was applied after skin suture. 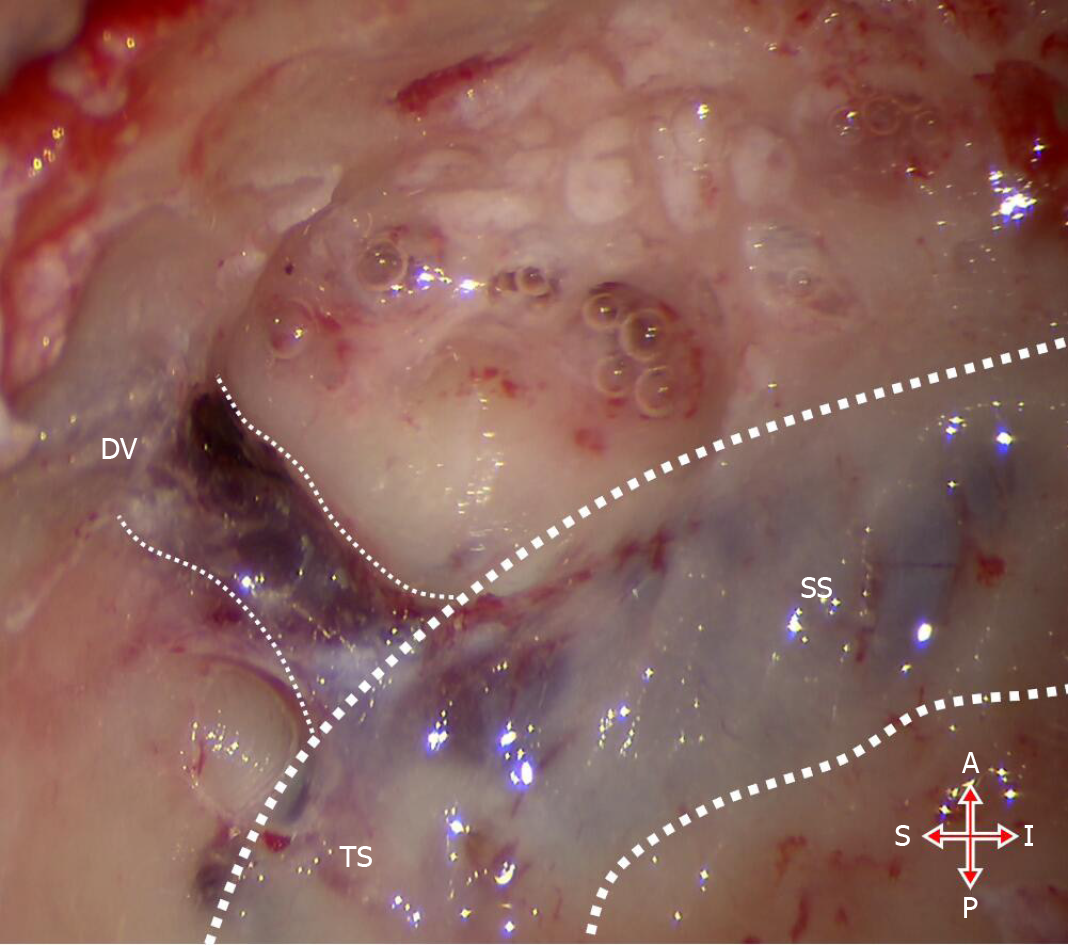 After the surgery, the patient had an immediate and complete resolution of the PT. Two weeks later, when she received postoperative 4D flow MR, she could occasionally perceive the PT with 10% of its preoperative loudness, and it had no recurrence at the 6-mo follow-up. No other discomfort or symptoms were present.

The hemodynamics in the transverse sinus and sigmoid sinus are closely related to the occurrence of venous PT[5,6]. The occipitoparietal DV connects to the junction of the transverse-sigmoid sinus and inevitably influences the flow pattern[3]; however, to the best of our knowledge, the relationship between the DV and PT has not been previously reported.

In this case, thorough examinations, including CTA/V, MR and DSA, were performed to assess the possible venous, arterial and neoplastic causes of PT; and no obvious abnormality was noted except for a dilated vine DV. 4D flow MR has been widely used to show multiple quantified hemodynamic data and dynamic and intuitive flow patterns of complex arterial or venous structures[5,7]. Hemodynamic changes in the DV and adjacent transverse sinus were observed. Then, trans-mastoid ligation was performed. The sound disappeared immediately after surgery and had no recurrence after 6 mo of follow-up.

Dehiscence resulting in direct communication between venous structures and mastoid air cells may be an essential condition for the transmission of PT. Sigmoid sinus wall dehiscence has been reported as the most common cause of PT[8,9]. It was reported to result in sigmoid sinus wall sound-generating pulsatile vibration[10]. The DV in this study was also found to have obvious dehiscence toward air cells. This sign was also noted in patients with aberrant sylvian veins and petrosquamosal sinuses, which were identified as the causative findings of PT, respectively[11,12]. The mastoid emissary vein and posterior condylar vein have also been confirmed as the causes of PT, but descriptions of bone wall integrity are lacking[13]. The mechanism of dehiscence is unclear, but it has been reported to be associated with the long-term impact of abnormal blood flow[5,6,9].

Abnormal hemodynamics in the offending vessels may be another common feature of venous PT. Current studies have shown that the blood flow velocity in the transverse sinus of the affected side is significantly faster than normal, with turbulence or vortex formation, which is mainly due to the pressure gradient between the two ends of the stenosis caused by ipsilateral transverse sinus stenosis and venous outflow dominance[5,6,9]. Our results showed relatively faster velocities in both the transverse sinus and the DV, as well as turbulence in the sigmoid sinus, which supported this speculation.

In recent years, with advances in imaging technology and increased awareness of PT, the causes of PT have also been increasingly detected. However, there are still a significant number of patients with no offending abnormalities identified after a thorough examination, which may partly be attributed to the effectiveness of the examination strategies and the lack of recognition of the occurrence of PT. We recommend that patients with PT who have no abnormalities on the otoscope first undergo a CTA/V examination[4]. If any abnormal venous structure accompanied by dehiscence toward the middle ear or air cells is found, it should be considered a possible cause of PT. However, CT alone is insufficient to determine whether it is symptomatic; therefore, 4D flow MR should be used to further evaluate the velocity, flow pattern and pressure gradient. We believe that this strategy may increase the rate of identifying the causes of PT.

Ligation is considered to be a safe and effective treatment for relatively small venous drainages as PT causes veins to have a strong compensatory ability. For large blood vessels, careful consideration should be given to whether compensation can be achieved to avoid adverse complications such as intracranial hypertension, venous infarction or hemorrhage.

We reported for the first time that abnormal DVs could cause PT, and ligation may be a safe and effective treatment for this condition. We believe that both abnormal hemodynamics in the offending vessels and bony wall dehiscence toward the middle ear or air cells may be common features of most causes of venous PT. Recognition of these two features may be beneficial to improve the cause detection rate and the treatment effectiveness rate for PT patients. We recommend using CTA/V and 4D flow MR to evaluate these features.