Adrenocortical carcinoma (ACC) is a rare and highly invasive endocrine malignant tumor with a poor prognosis. Although surgical resection is the main treatment for ACC, postoperative recurrence and metastasis have become the important factors of death. Transcatheter arterial chemoembolization (TACE) is an important option for the treatment of advanced ACC with liver metastasis. However, due to the small number of patients treated for ACC, the safety of the operation is not completely clear and needs to be further studied.

A 47-year-old patient with ACC after surgery was admitted for reexamination by abdominal computerized tomography suggesting liver metastasis. Because the patient expressed reluctance to undergo surgery again, we treated her with TACE for the liver lesions. After treatment, symptoms of acute adrenal dysfunction such as decreased blood pressure, anorexia, and fatigue appeared, which were relieved after hydrocortisone treatment. To date, the patient's liver lesion is well controlled and no other metastases are observed.

We report a rare case of acute adrenal hypofunction after TACE. Glucocorticoid supplementation can alleviate the symptoms.

Core Tip: It is a very rare that adrenocortical carcinoma (ACC) patients develop acute adrenal hypofunction after transcatheter arterial chemoembolization (TACE). Following current standards, glucocorticoid supplementation should be used to alleviate the symptoms and help the patients survive the high-risk period. More knowledge and reports on the postoperative complications of TACE can increase the safety of treatment. Here, we report the case of an ACC patient with acute adrenal hypofunction after TACE.

Adrenocortical carcinoma (ACC) is a very rare tumor found in 0.7–2.0 cases/million people per year, amounting to approximately 0.02% of all malignant tumors[1,2]. The best treatment for ACC is still unclear. Although surgical resection of tumors is considered to be the most effective method, tumor recurrence or distant metastasis still occurs in 80% of surgical patients[3]. The treatment options for metastatic ACC are very limited. Although research on the molecular pathogenesis of ACC has made great progress, there have been no major advances in treatment. Systemic treatment is still dominated by mitotane monotherapy and platinum-based chemotherapy[1,4]. In the search for new treatment methods, local treatment of ACC has emerged. Transcatheter arterial chemoembolization (TACE) is one of the more active treatments for ACC with liver metastasis, but the postoperative efficacy and adverse reactions are still unclear. We report a 47-year-old woman diagnosed with ACC with liver metastases who developed the rare complication of acute adrenal hypofunction after TACE.

A 47-year-old ACC patient had liver metastases on examination 17 mo after adrenal resection. After that, she was admitted to our department for detailed medical treatment.

According to her medical history, the patient underwent high-resolution computed tomography (CT) of the skull, chest, abdomen, and pelvis in May 2019, which indicated a large space occupying lesion in the right adrenal gland with a vena cava tumor thrombus (Figure 1). No obvious masses were seen in the remaining parts. The patient underwent right adrenal resection + vena cava and right atrium tumor thrombus removal. She was diagnosed with ACC given the above and her immunohistochemical parameters and postoperative pathology[5]. She had taken mitotane since the surgery for ACC. The patient came to our department's outpatient clinic 17 mo later, in September 2020. She presented hypertension with blood pressure fluctuations of 169-139/101-90 mmHg, adrenocorticotropic hormone (ACTH) of 36.4 pg/mL, and cortisol of 14.69 μg/dL. High-resolution CT scans of the chest, abdomen, and pelvis showed changes after adrenalectomy, but there was a dense, round, irregularly large mass of approximately 112.7 mm × 79.8 mm in the left lobe of the liver (Figure 2). This indicated that ACC recurrence was accompanied by liver metastasis, one of the most common metastatic sites of ACC[6].

Figure 1 Computed tomography images showing a huge mass in the right adrenal gland in both transverse and coronal view. A: Transverse view; B: Coronal view. 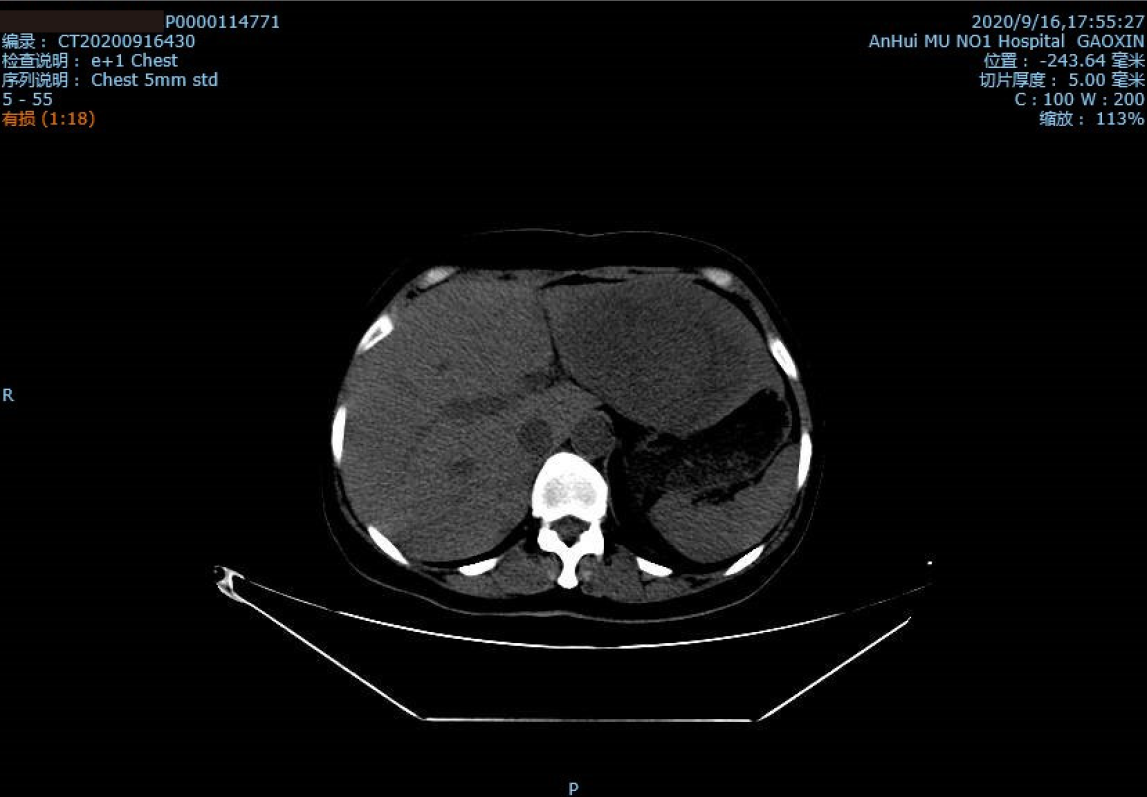 Figure 2 Computed tomography image showing a large, round, compact, and irregular mass on the left lobe of the liver, approximately 112.7 mm × 79.8 mm.
Personal and family history

The patient had previously undergone an adrenalectomy and received mitotane with no other treatment. Her family history was negative for a genetic disease or malignancy.

Physical examination showed no obvious abnormality. The abdomen was flat and soft without tenderness or rebound pain.

Laboratory tests, such as those for neutrophils, C-reactive protein, and transaminases, ruled out liver damage and infection.

After treatment, a CT scan showed a good uptake rate of lipiodol and honeycomb necrosis of liver tumor cells.

The final diagnosis was acute adrenal hypofunction after TACE.

According to the Clinical Practice guidelines of the European Endocrine Society for the treatment of adult ACC, local treatment may be beneficial for patients with advanced ACC with metastasis[7]. Because the patient expressed reluctance to undergo surgery again, we treated her with TACE for the liver lesions. We chose to puncture the right femoral artery, and a 5-F catheter sheath and a 5-F RH catheter were inserted successively. The catheter head was inserted into the celiac artery for digital subtraction angiography imaging. A lightly stained large tumor was seen in the left lobe of the liver, and the left hepatic artery participated in the blood supply of the tumor. A microcatheter was used to superselect the blood supply artery of the left hepatic artery tumor. A mixed emulsion of 60 mg cisplatin + 10 mL iodized oil was injected, and an appropriate amount of 560 μm gelatin sponge particles was used to reinforce the embolism. The second imaging showed that lipiodol deposition was acceptable and that the blood supply artery of the tumor was blocked (Figure 3). After the operation, anti-infection, liver protection, fluid infusion, and other symptomatic treatments were administered. On the 4th day, the patient developed symptoms such as fatigue, anorexia, fever, morning blood pressure 77/41 mmHg, heart rate 80 beats/min, hemoglobin 105 g/dL, serum potassium 2.56 mmol/L, serum sodium 123.8 mmol/L, and C-reactive protein 219.80 μg/L, which we considered indicative of embolism syndrome. Symptomatic treatment, such as fluid rehydration, dopaminergic elevation of blood pressure, and electrolyte balance correction, was performed, but her condition did not improve significantly, and her blood pressure was maintained at approximately 105/90 mmHg. The hormone levels were ACTH 298.54 pg/mL and cortisol < 0.1 μg/dL. We believed that this was caused by hypoadrenal function, so we administered a hydrocortisone 100 mg intravenous drip once daily. 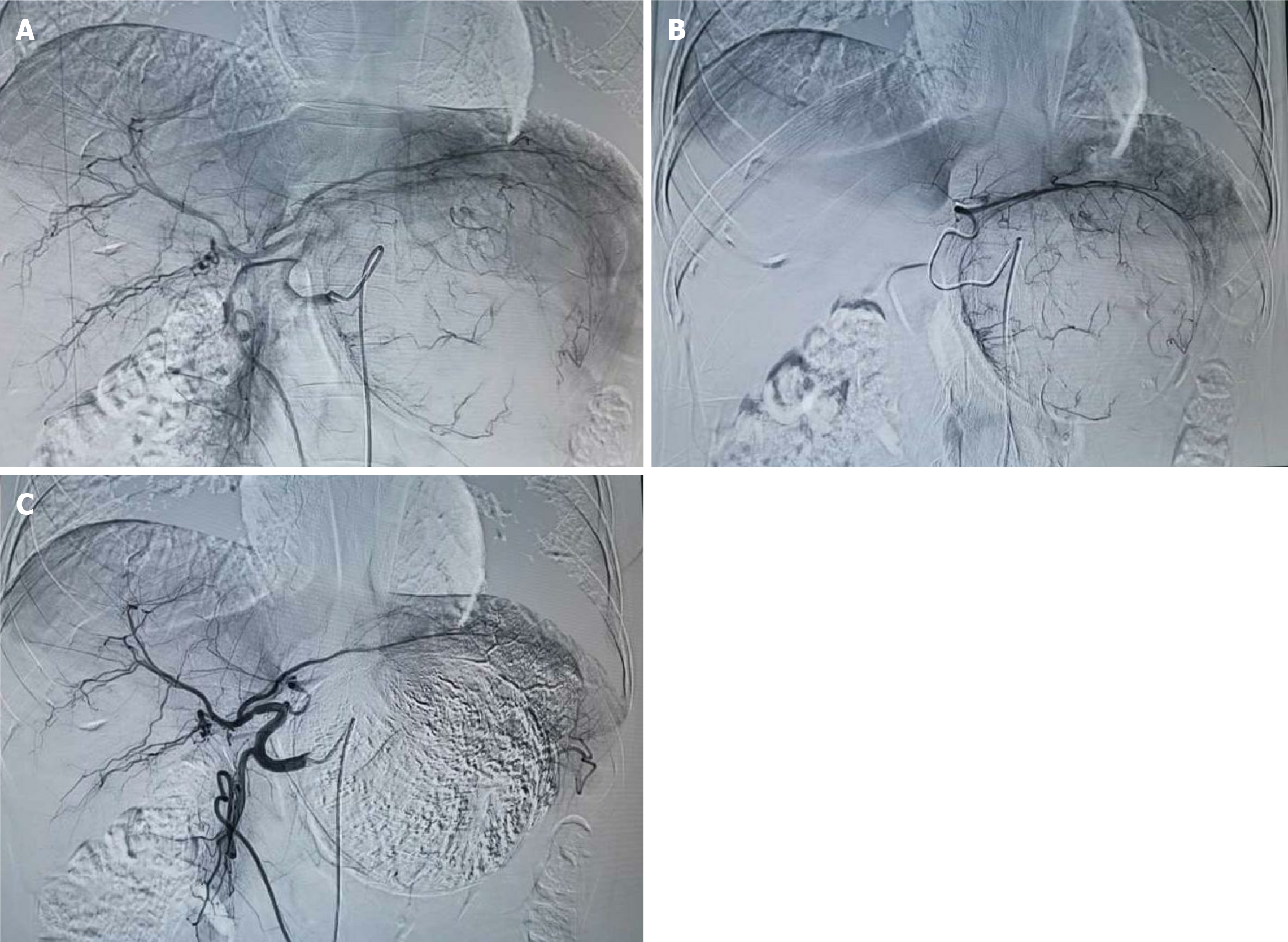 Figure 3 Intraoperative photographs. A: There is a large, lightly stained tumor in the left lobe of the liver. The left hepatic artery is the main blood supply for the tumor; B: The guidewire entering the left hepatic artery for chemoembolization; C: The left lobe of the liver has a good deposit of lipiodol after the chemoembolization.
OUTCOME AND FOLLOW-UP

After the operation, the patient's condition was stable, and her blood pressure remained at 136-120/95-82 mmHg. Re-examination of CT showed a good percentage of lipiodol uptake, and she was discharged from the hospital (Figure 4). 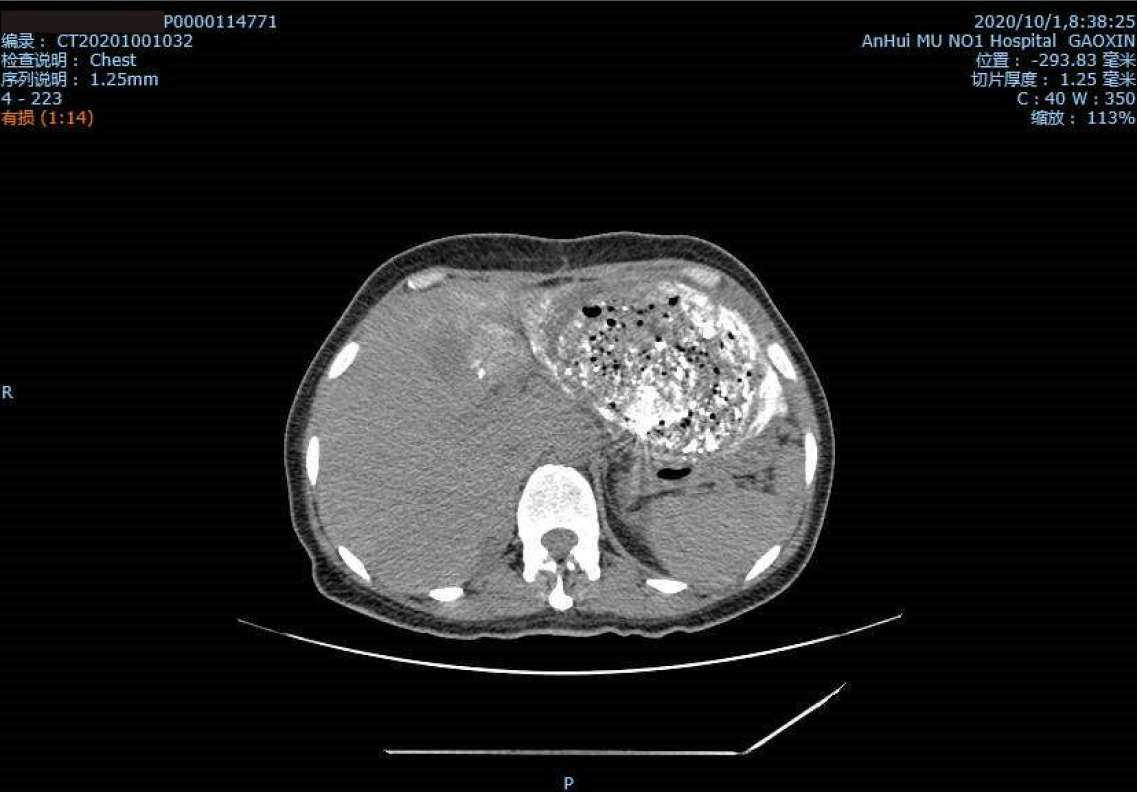 ACC is a rare form of aggressive malignancy with limited treatment options and a poor prognosis. Currently, the 5-year overall survival rate of metastatic ACC is expected to be less than 15%[8]. Treatments for ACC are still being explored. The preferred systemic treatment is mitotane alone, the combination etoposide, doxorubicin, and cisplatin plus oral mitotane (EDP-M), or platinum-based chemotherapy, but the efficacy is not good. In recent years, re-surgical resection and local treatment have been advocated for the treatment of metastatic ACC. Radiofrequency ablation, TACE, and other methods are often used for local treatment to reduce the burden of local tumors[9,10]. Cazejust et al[11] treated 29 patients with ACC with liver metastases by TACE. The median time to progression was 9 mo, and the median survival time was 11 mo after the first procedure. This compares favorably to a median progression time of 5.0 mo[1] for EDP-M combined with mitotane and 5.5 mo[7] for erlotinib/gemcitabine combined. Other comparisons, such as against the maximum progression-free time of 4 mo for irinotecan-based chemotherapy[12] and the median progression-free time of 5.3 mo for gemcitabine-based chemotherapy[13], are also favorable. In terms of toxicity, the symptoms are controlled nausea, vomiting, fever, and abdominal pain, which can be relieved after symptomatic treatment. Hepatotoxicity occurs in 69% of patients (grade 3 or higher in 7%). None of these are major life-threatening complications, suggesting that TACE is a relatively safe treatment.

Considering that the current patient was unwilling to undergo surgery again, we chose TACE to reduce the tumor burden. As previously reported, TACE is highly safe, but there are exceptions. As far as we know, adrenal hypofunction is a very rare phenomenon after TACE, as it has not been reported so far. Adrenal hypofunction often occurs after adrenal gland removal, and related studies have shown that over 23% of patients with adrenal tumor resection have acute adrenal hypofunction[7,14,15]. Although adrenal cortical cancer is divided into functional and nonfunctional, both types of ACC may cause acute adrenal hypofunction. Functional ACC inhibits the hypothalamus-pituitary-adrenal axis through higher-than-normal levels of cortisol, which reduce the synthesis and secretion of ACTH. Therefore, removal of the diseased adrenal gland will lead to a drastic reduction in blood cortisol and cause acute adrenal dysfunction. Nonfunctional ACC is different in that normal adrenal tissue is removed at the same time as the adrenal gland, which may leave insufficient time for adrenal hormone supplementation and decreased acute adrenal dysfunction.

The patient in this case had functional ACC, and the liver metastasis was also characterized by secretion of adrenal hormones, so the patient had a high cortisol level. A large number of tumor cells showed honeycombed necrosis in the liver lesions after TACE, which caused a sharp decrease in the originally high hormone levels and the occurrence of acute adrenal dysfunction. We considered that the large percentage of lipiodol uptake caused by this treatment resulted in a large area of tumor cell necrosis, which was closely related to the good therapeutic effect. This is in line with a previous conclusion[11]. For the life-threatening complication of adrenal hypofunction, we can refer to the guidelines to supplement adrenal cortex hormones[7], which can effectively relieve symptoms. We suggest that ACC patients monitor changes in hormone levels after TACE and be alert to the complication.

We report a case of ACC with a rare complication of acute adrenal hypofunction after TACE. The symptoms of this case were relieved by supplementing with hydrocortisone. It is important to re-examine hormone levels in ACC patients after TACE.