Malignant fibrous histiocytoma (MFH) is one of the most common soft tissue sarcomas among adults. It is characterized by large size, high grade, and biological aggressiveness. There are many reports of MFH after local stimulation, such as bone fracture, implants, and chronic osteomyelitis. In this paper, we report a patient who developed MFH 6 years after amputation, suggesting that wound healing and mechanical force play a role in the local stimulation of this disease.

A 66-year-old man complained of persistent pain in his residual mid-thigh. He had undergone amputation surgery due to a traffic accident 6 years prior. Physical examination showed tenderness but no abnormalities in appearance. X-ray radiographs and magnetic resonance imaging supported the diagnosis of a tumor, and a biopsy confirmed that the lesion was MFH. The patient received neoadjuvant chemotherapy and left hip disarticulation. During the 6-mo follow-up, there were no symptoms of recurrence.

Postsurgery MFH has been reported before, and many studies have attributed it to the biological effects of implants. Our case report shows that this disease can develop without an implant and thus highlights the importance of local stimulation. The wound-healing process and mechanical force can both promote this tumor, but whether they directly cause MFH needs further investigation.

Core Tip: In this paper, we report a patient who developed malignant fibrous histiocytoma 6 years after amputation, suggesting the role of wound-healing and mechanical force as local stimulation in this disease.

Malignant fibrous histiocytoma (MFH), also referred to as undifferentiated pleomorphic sarcoma, is one of the most common soft tissue sarcomas among adults and has a peak incidence between 60 and 70 years of age[1]. Most MFHs occur in extremities (49% in lower and 19% in upper extremities), followed by the trunk and retroperitoneum[2].

The relationship between MFH and local stimulation has been discussed for a long time. There are many studies attributing postsurgery MFH to the biological effect of the implants[3-6]. Keel et al[7] diagnosed four patients with MFH in their case series, all of whom had previously undergone surgery with implants. Reports of MFH occurring from 10 mo to 12 years after femoral fracture suggest that this tumor can be promoted by trauma[8,9]. In addition to implants and injury, MFH occurring at the site of chronic osteomyelitis is seen in the course of treatment[10-13]. The role of amputation was also mentioned by Inoshita et al[14] in their case report. In this paper, we present an MFH arising from the stump 6 years after amputation and discuss how local stimulation could induce MFH.

A 66-year-old man presented at the orthopedics clinic with a history of persistent pain in his amputation stump.

The patient’s pain started 3 mo ago and was not relieved spontaneously.

Six years ago, the patient underwent a traumatic amputation at his mid-thigh after a traffic accident.

None of the patient’s family members developed tumors before.

On physical examination, there was tenderness of the patient’s residual limb, and the appearance of his amputation stump was normal. 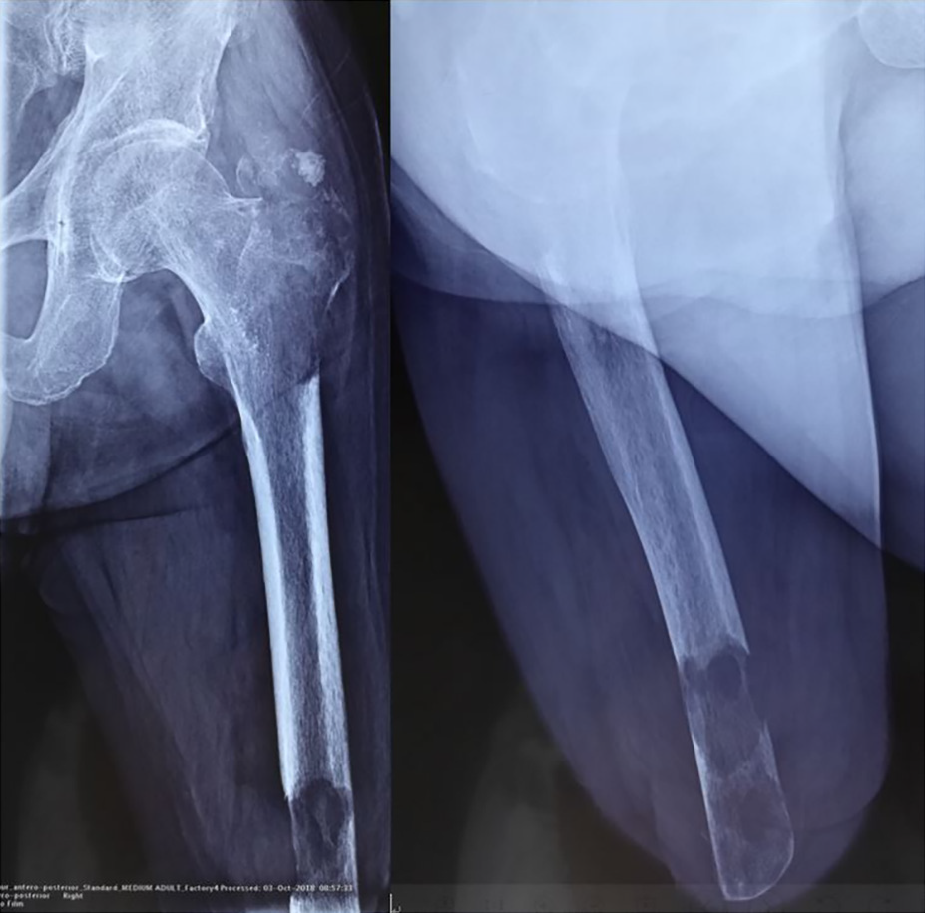 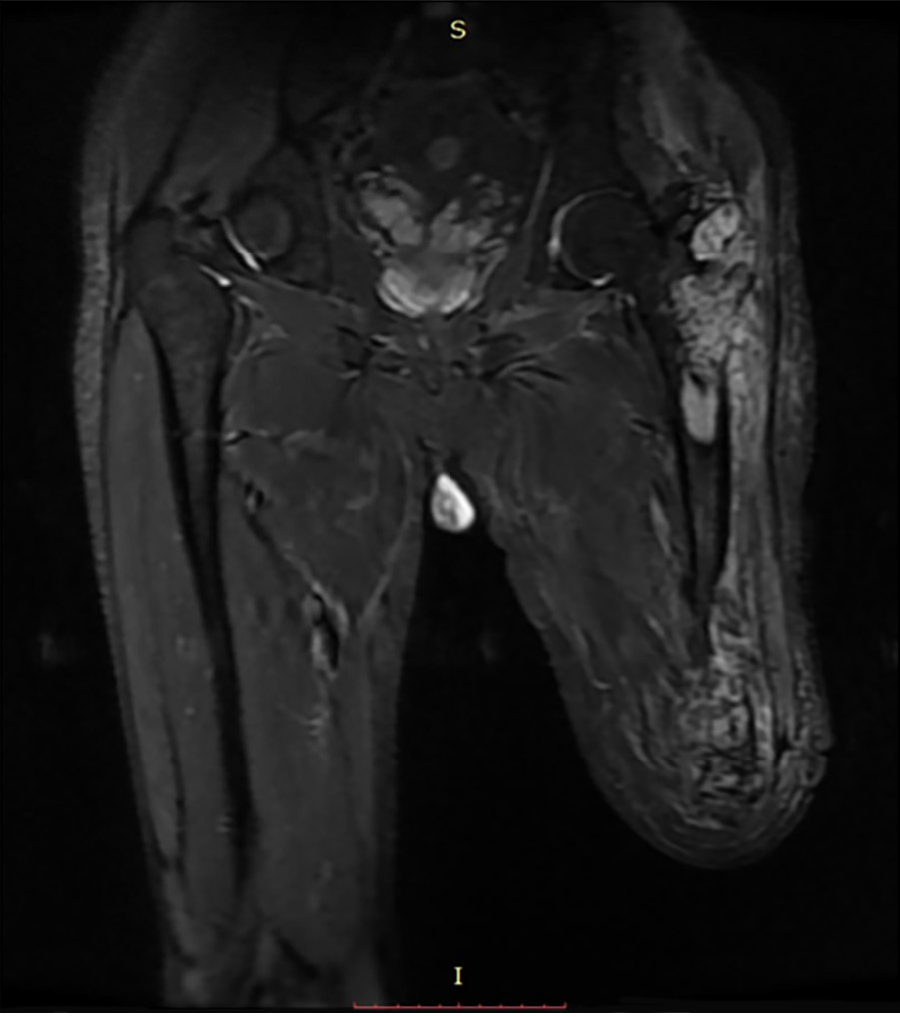 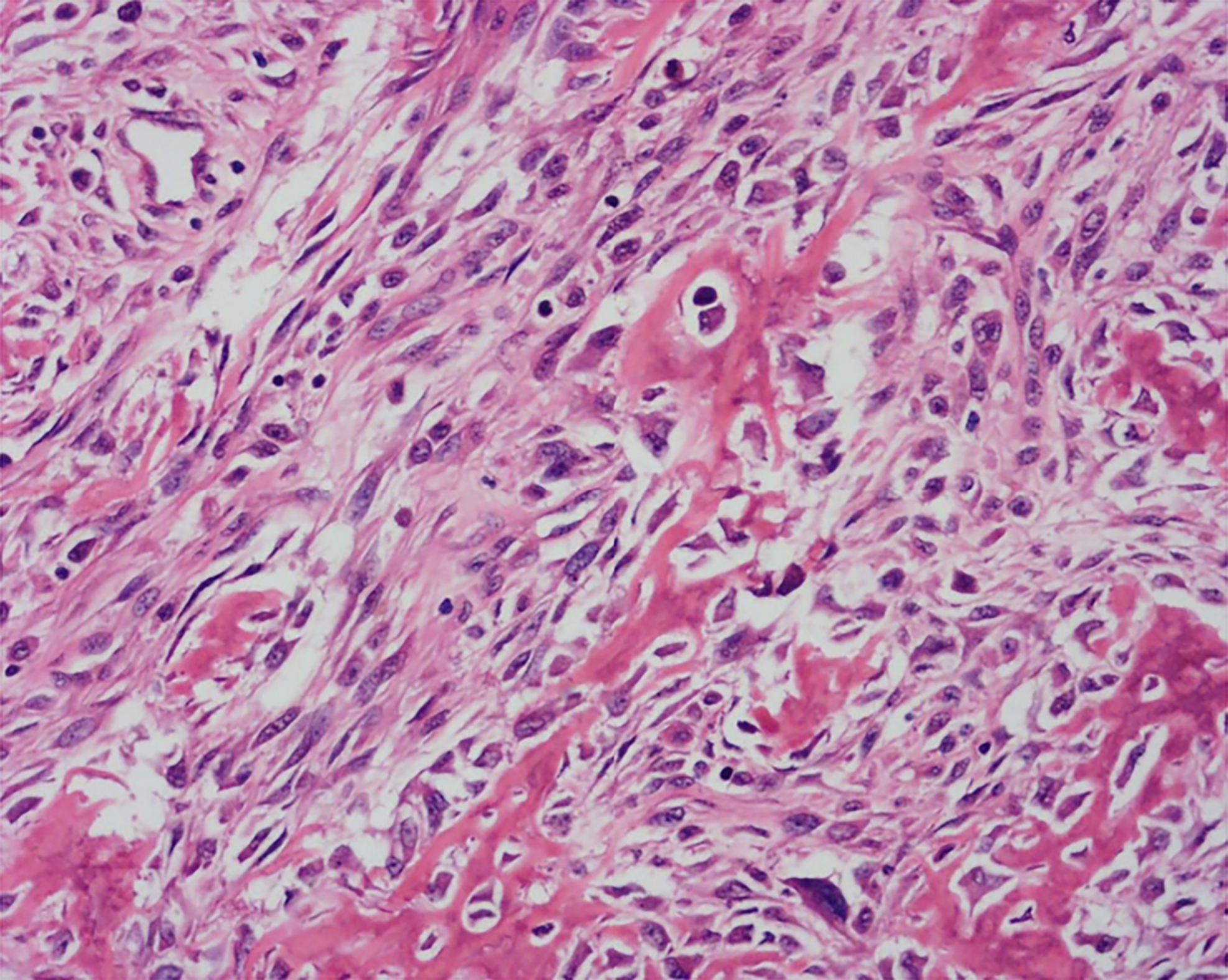 At the 6-mo follow-up, the patient remained asymptomatic with no recurrence of MFH.

MFH is a pleomorphic sarcoma that was originally described by Ozzello et al[15] in 1963 and O’Brien and Stout[16] in 1964. It is characterized by large size, high grade, and biological aggressiveness. Tumors involving extremities frequently present as painless masses that grow over a period of months[17].

The factors possibly related to MFH have been discussed for a long time. Some investigators reported postsurgery MFH, and most of them tended to attribute the tumor to implants rather than surgery[3-6] because the components of the implants might be carcinogenic. Keel et al[7] considered the biological effects of metal components (e.g., cobalt, chromium, stainless steel, nickel, iron, and manganese) and organic components (e.g., polymethylmethacrylate, polyethylene, silicone, and aliphatic polyurethane). Another commonly used component, titanium, though regarded as a relatively safe material, has been reported to induce genomic instability in vitro[18]. However, in this case, the patient did not receive any implants, necessitating other explanations.

Another theory is that it is a coincidence. MFH usually occurs in males in the femur, and patients with MFH arising in preexisting bone abnormalities were older than those with MFH in normal bone[19], and all of these features were demographic features of this patient. This patient might have developed MFH spontaneously after amputation.

In contrast to a number of studies on these types of carcinogenic mechanisms, only a few studies are available on molecular mechanisms involved in the tumorigenesis of MFH[25]. Idbaih et al[26] identified a high level of genomic complexity with the recurrent amplification of the 5p chromosome region, the biological significance of which is unknown. Perot et al[27] found that MFH was associated with the inactivation of the RB1 gene or frequent loss of p53 function. Matsuo et al[28] detected telomerase activity and the expression of human telomerase reverse transcriptase in tumor samples. Current studies have shown no association with signaling pathways related to wound healing and mechanical force.

The amputated femur of the patient showed two separate lesions in the greater trochanter and the residual limb. The two lesions were not connected by any intramedullary or extraosseous tissue. This is common in musculoskeletal tumors[29]. In the literature, multiple lesions in one bone are usually described as skip metastasis or synchronous multifocal tumors[29,30].

In this case, a 66-year-old man developed MFH 6 years after amputation. The disease course may suggest that the mechanical force from the prosthesis can promote MFH. However, based on the patient’s demographic characteristics, the tumor could also have occurred spontaneously without any correlation to the previous amputation surgery. More investigation is needed to determine whether the prosthesis or other types of local stimulation affect MFH after surgery.