Research Domain of This Article
Anesthesiology

Herein, we report the case of a 54-year-old healthy male patient who experienced involuntary movements after intrathecal injection of local anesthetics. This patient had undergone metal implant removal surgery in both the lower extremities; 7 h after intrathecal hyperbaric bupivacaine administration, involuntary raising of the left leg began to occur every 2 min. When the movement disorder appeared, the patient was conscious and cooperative. No other specific symptoms were noted in the physical examination conducted immediately after the involuntary leg raising started; moreover, the patient's motor and sensory assessments were normal. The symptom gradually subsided. Twelve hours after the symptom first occurred, its frequency decreased to approximately once every three hours. Two days postoperatively, the symptoms had completely disappeared without intervention.

Anesthesiologists should be aware that movement disorders can occur after spinal anesthesia and be able to identify the cause, such as electrolyte imbalance or epilepsy, since immediate action may be required for treatment. Furthermore, it is crucial to know that involuntary movement that develop following spinal anesthesia is mostly self-limiting and may not require additional costly examinations.

Core Tip: Various movement disorders can occur after induction of neuraxial anesthesia, and anesthesiologists should be aware of these symptoms. Upon their appearance, diseases requiring emergent treatment should be identified first. Once these are excluded, the spinal myoclonus that develops following neuraxial blockade is usually self-limiting; therefore, additional costly tests may not be necessary.

Intrathecally administration of spinal anesthesia is a common anesthetic technique used in lower extremity surgeries[1]. Neurological complications, such as hematoma, infections, and temporary or permanent spinal cord injuries, can occur after spinal anesthesia[2]. However, involuntary myoclonic movement following neuraxial anesthesia is an extremely rare complication[3,4]. Sudden shock-like involuntary muscle contractions that affect a single muscle or multiple muscle groups[5-7] can occur following spinal anesthesia; alternatively, these movements can mimic a pedaling movement[8]. These symptoms rarely appear in the upper extremities[9,10]. Although there is no official name for this involuntary myoclonic movement, when it follows neuraxial anesthesia, it is called spinal myoclonus following neuraxial anesthesia (SM-NA)[4]. The characteristics of SM-NA are different from those of typical myoclonus, and the etiology is unclear[4]. Therefore, additional case reports on these presentations need to be published to increase awareness and determine the cause of these symptoms. Furthermore, these symptoms are especially rare in men aged < 60 years, as reported in this case[4]; recently reported cases of SM-NA have mainly involved young women after cesarean sections[8,11]. Therefore, we believe this case to be quite valuable. Herein, we report a case, accompanied by a video, of periodic involuntary leg movements that developed in a healthy 54-year-old man after spinal anesthesia.

The patient underwent a metal implant removal surgery after surgical correction for bilateral cavovarus feet. The operation was limited to the area below the knee. The patient had received spinal anesthesia without premedication. A lumbar puncture was performed at the L3-4 level using a 25-gauge Quincke needle with the patient in the right lateral position, and 3 mL of 0.5% hyperbaric bupivacaine was administered. Loss of sensation to cold occurred below the T8 sensory dermatome. A complete inability to raise the legs straight (Bromage grade 3) was confirmed. Dexmedetomidine was administered for sedation—75 μg of dexmedetomidine was injected intravenously at the antecubital fossa for 10 min, followed by continuous infusion at a constant rate (1.0 μg/kg/h) using an infusion pump. The infusion was stopped 30 min before the end of the surgery. The operation proceeded uneventfully and lasted 225 min. The patient was then transferred to the general ward after observation in the postoperative care unit for 30 min. Approximately 7 h later, after hyperbaric bupivacaine administration, the patient involuntarily lifted the left lower leg (Figure 1). Every two minutes, the patient’s left lower extremity involuntarily raised with hip flexion (Video). This symptom occurred without prior stimulation. 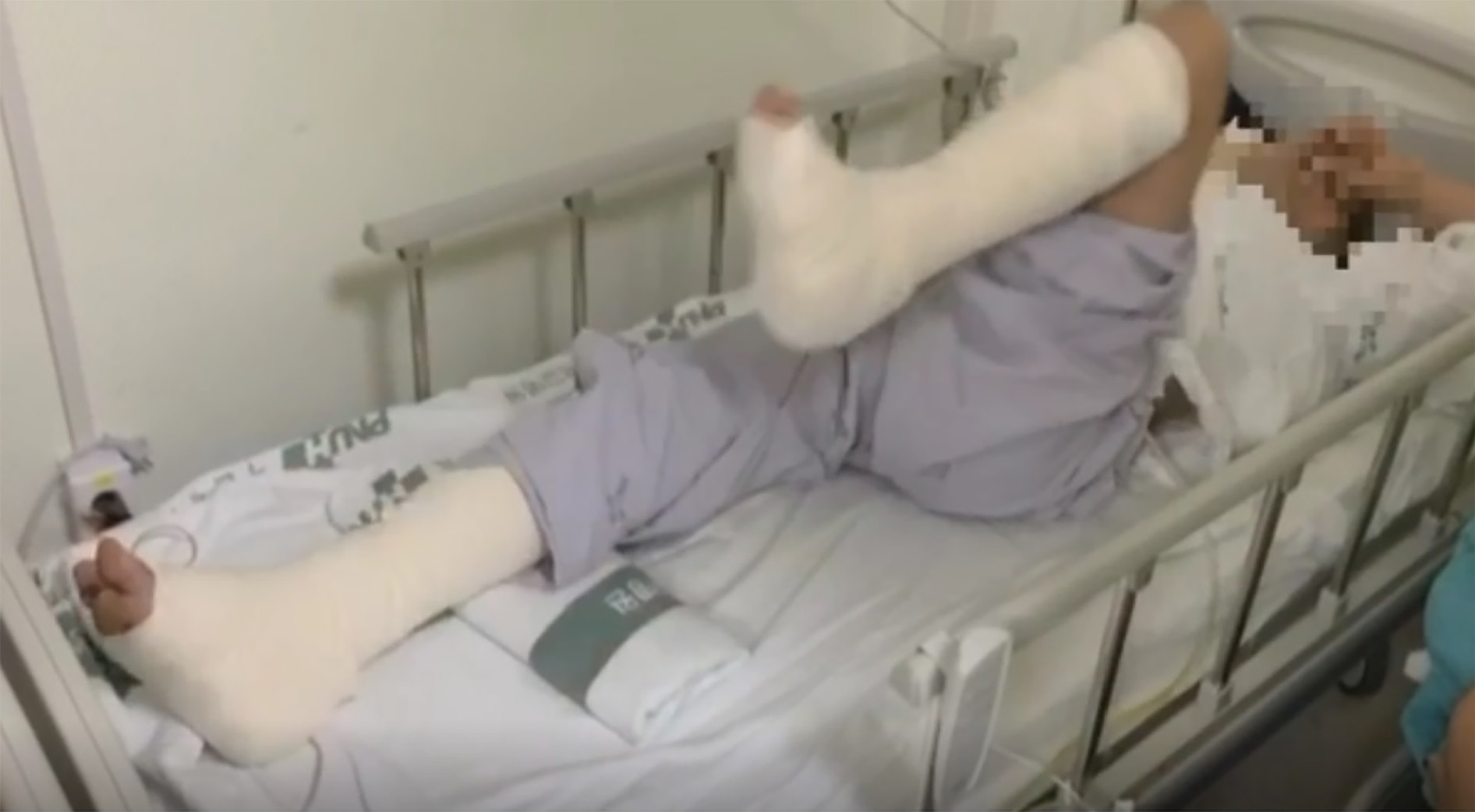 Figure 1 Image of the patient. The patient showing abnormal movement in the left leg after surgery.
History of past illness

The patient had no significant medical history, including neurologic disorders, seizures, or spinal or brain tumors. There was no glucose intolerance in the preoperative evaluation, as verified by an HbA1c of 5.66%.

The patient had no remarkable personal and family history.

Plain radiographs of both feet were acquired before and after surgery, and no abnormalities were identified (Figure 2). 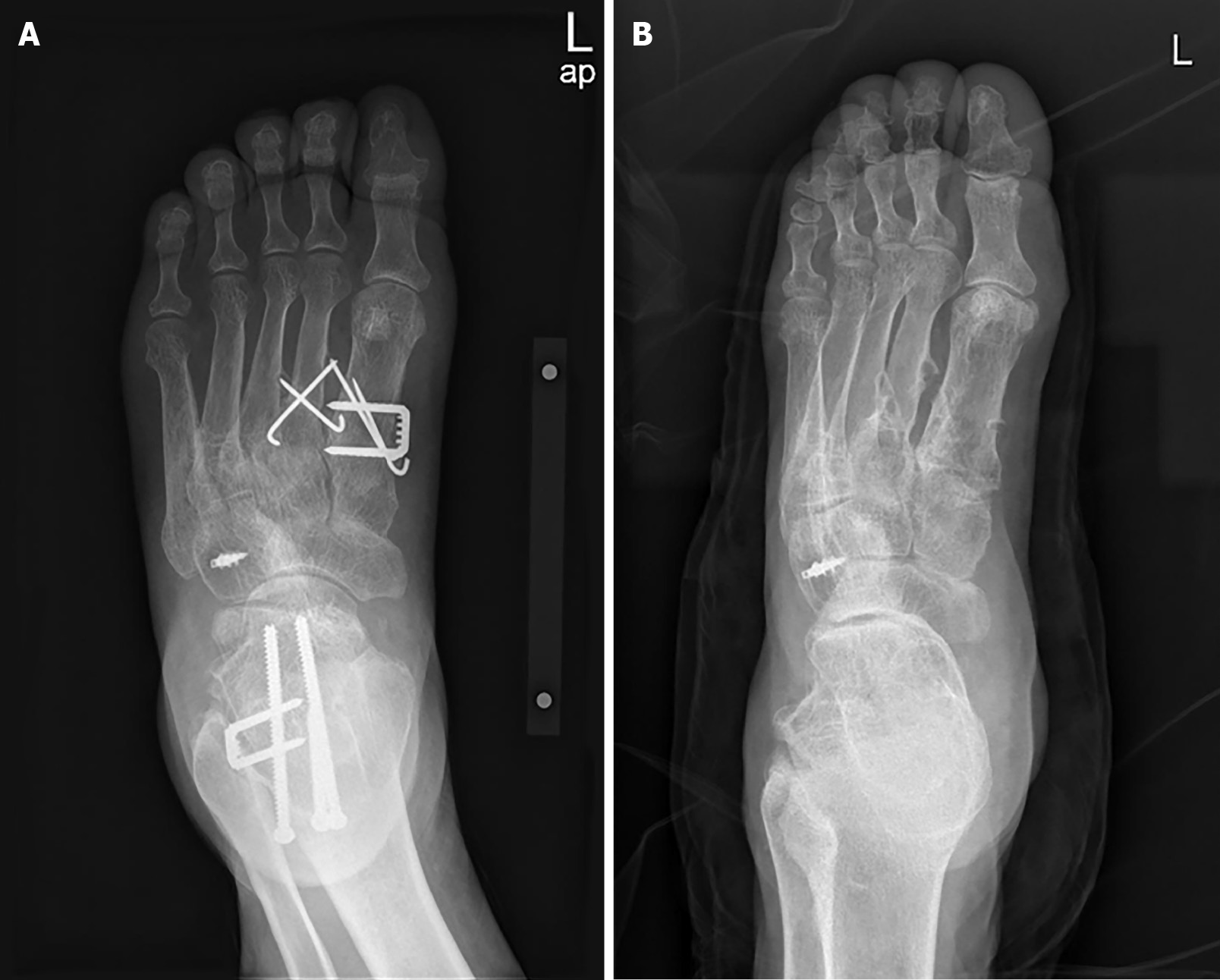 The patient was diagnosed with myoclonus following spinal anesthesia.

After consultation with a neurologist, it was confirmed that there were no abnormalities on neurologic examination. Moreover, since the frequency of the abnormal movements gradually decreased, we decided to only observe the symptoms, although brain computed tomography and magnetic resonance imaging were advised in the event that the patient’s symptoms worsened. Clonazepam injection was planned in case of symptom recurrence, but it was not needed due to the improvement of symptoms.

When the symptom first appeared, the patient raised the left leg involuntarily every 2 min. Twelve hours after symptom onset, the number of leg lifts decreased to about once every three hours. The involuntary movements subsided substantially. Eventually, on postoperative day 2, the symptom resolved completely.

In this report, involuntary movement of the left leg following spinal anesthesia with bupivacaine occurred in a patient undergoing metal implant removal surgery. The patient was a 54-year-old man with no other medical history, including seizures. The involuntary movement subsided spontaneously and disappeared on postoperative day 2.

In this case, the post-neuraxial blockade movement disorder was different from traditional myoclonus, which is described as a sudden muscle spasm, since it resembled a kicking motion. Furthermore, it only occurred in the left leg. There is no official name for anesthesia-related involuntary myoclonic behavior[4]. The symptoms that have been reported in previous studies are varied and atypical. Thus, to increase awareness of this atypical movement disorder caused by spinal anesthesia, we believe that it is essential to share our case features with the medical community. In this case, SM-NA occurred in a young man, unlike in previously reported cases in which the patients were young women undergoing cesarean sections[4,8,11].

The cause of SM-NA remains unclear, but it may occur after intrathecal administration of local anesthetics, analgesics, or contrast agents[3]. Intrathecally administered drugs stimulate the spinal cord, which may increase the irritability of the alpha-motor neurons. In addition, epidural anesthesia has been shown to cause spinal myoclonus[5,12,13]. In previous articles, there was a presumption that myoclonus occurs due to the effects of the local anesthetics on the inhibitory neurons involved in the suprasegmental descending pathways[11]. Loss of inhibitory function of the spinal cord and hyperactivity of the anterior dorsal horn may be the cause of SM-NA[13]. In our case, the symptoms only occurred in the left leg. This suggests an uneven distribution of local anesthetics in the spinal cord[13]. The relationship between the patient’s posture and the effect of gravity on hyperbaric bupivacaine has not been fully elucidated, and further research is needed.

Diagnosing SM-NA is difficult because it is a very rare complication. It is essential to distinguish SM-NA from other, more serious problems that require immediate evaluation and treatment, such as epilepsy, electrolyte imbalance, tumor, or infection. This patient’s medication history was also reviewed for the differential diagnosis of neuroleptic-induced extrapyramidal syndromes, although the pedaling movements are unusual in extrapyramidal syndromes[8]. Furthermore, the patient had no history of use of antipsychotics, such as haloperidol and chlorpromazine. Additionally, we assessed whether the patient was receiving any secondary benefits (such as attention or encouragement), and it was confirmed that these were not present.

SM-NA is self-limiting in most cases[4]. It is possible that the disappearance of myoclonus was consistent with the loss of the local anesthetic effect[4]. Therefore, diseases requiring emergent treatments should be identified first. Exclusion of such diseases may avoid the need for expensive or invasive evaluations. There may be no useful examinations to detect SM-NA because the results of the electrophysiological examination, radiologic imaging tests, electroencephalogram as well as other tests revealed no abnormal findings[4].

There is no specific treatment for SM-NA. Some reports suggest that benzodiazepine is effective for the rapid suppression of SM-NA[7]. For cases in which the patient’s symptoms are very severe, benzodiazepine therapy could be considered.

In this case, unlike in other reported cases, the onset of symptoms was slow[4]. Therefore, it was difficult to determine whether this symptom was related to spinal anesthesia. It was speculated that one of the causes of the delayed manifestation was dexmedetomidine. Dexmedetomidine infusion was started after the injection of bupivacaine and immediately after the sensory block check, and it was stopped 30 min before the end of surgery. Dexmedetomidine has been shown to prevent etomidate-induced myoclonus in previous studies[14]. Considering this observation, it is possible that dexmedetomidine delayed the onset of the symptoms.

In summary, development of myoclonus following spinal anesthesia is an extremely rare complication; however, if it occurs, other diseases should be excluded before establishing a diagnosis of SM-NA. The involuntary movements of SM-NA have been shown to spontaneously disappear in many cases. Therefore, if SM-NA is suspected, it may be better to monitor the progress before conducting additional examinations, such as electrophysiological tests and electroencephalograms.