Neoplastic pericardial effusion (NPE) is a rare consequence of rectal cancer and carries a poor prognosis. Optimal management has yet to be determined. Fruquintinib is an oral anti-vascular endothelial growth factor receptor tyrosine kinase inhibitor approved by the China Food and Drug Administration in September 2018 as third-line treatment of metastatic colorectal cancer.

Herein, we report an elderly patient with NPE from rectal cancer who responded to the use of fruquintinib. In March 2015, a 65-year-old Chinese woman diagnosed with KRAS-mutated adenocarcinoma of the rectum was subjected to proctectomy, adjuvant concurrent chemoradiotherapy, and adjuvant chemotherapy. By October 2018, a mediastinal mass was detected via computed tomography. The growth had invaded parietal pericardium and left hilum, displaying features of rectal adenocarcinoma in a bronchial biopsy. FOLFIRI and FOLFOX chemotherapeutic regimens were administered as first- and second-line treatments. After two cycles of second-line agents, a sizeable pericardial effusion resulting in tamponade was drained by pericardial puncture. Fluid cytology showed cells consistent with rectal adenocarcinoma. Single-agent fruquintinib was initiated on January 3, 2019, as a third-line therapeutic. Ten cycles were delivered before the NPE recurred and other lesions progressed. The recurrence-free interval for NPE was 9.2 mo, attesting to the efficacy of fruquintinib. Ultimately, the patient entered a palliative care unit for best supportive care.

Fruquintinib may confer good survival benefit in elderly patients with NPEs due to rectal cancer.

Core Tip: Neoplastic pericardial effusion (NPE) is a rare consequence of rectal cancer and carries a poor prognosis. We report an elderly patient with NPE from rectal cancer who responded to the use of fruquintinib. In March 2015, a 65-year-old Chinese woman diagnosed with adenocarcinoma of the rectum. By October 2018, FOLFIRI and FOLFOX chemotherapeutic regimens were administered as first- and second-line treatments. After two cycles of second-line agents, she was diagnosed with NPE. Single-agent fruquintinib was initiated as a third-line therapeutic. The recurrence-free interval for NPE was 9.2 mo, attesting to the efficacy of fruquintinib.

Colorectal cancer (CRC) is the third most common cancer diagnosed worldwide and ranks fourth in global cancer mortality, accounting for an estimated 1.4 million new cases and 700,000 deaths in 2012[1]. Metastasis to the heart is rare, one autopsy series showing a prevalence of 1.4%-2%, and most often involves pericardium[2]. To date, only seven cases of neoplastic pericardial effusion (NPE) due to CRC have been reported in the English literature, four of them stemming from rectal cancer[3-6].

The novel anti-vascular endothelial growth factor receptor (VEGFR) tyrosine kinase inhibitor (TKI) fruquintinib (Elunate®, Eli Lilly, Indianapolis, IN, United States) has been approved by China Food and Drug Administration since September 2018. It is indicated in past recipients of at least two standard therapies for metastatic CRC (including fluoropyrimidine, oxaliplatin, and irinotecan), with or without prior use of VEGF inhibitors or epidermal growth factor receptor (EGFR) inhibitors[9]. This TKI is highly selectively for VEGFR-1, -2, and -3[10]. In the FRESCO phase 3 trial, fruquintinib (vs placebo) improved both OS (9.3 mo vs 6.6 mo; P < 0.001) and progression-free survival (PFS: 3.7 mo vs 1.8 mo; P < 0.001) of patients with metastatic CRC[11].

Herein, we describe an elderly woman with NPE due to rectal cancer who benefitted from fruquintinib therapy.

In March 2015, the patient received a diagnosis rectal adenocarcinoma. She had been troubled by constipation for approximately 2 years, claiming intermittent hematochezia for 1 wk. The cancer was discovered during outpatient colonoscopy and was subsequently removed via abdominoperineal resection (Miles proctectomy). Postoperative pathologic examination showed a stage IIIB, moderately differentiated, KRAS-mutated (exon 2) adenocarcinoma with nodal involvement (2/12) (Figure 1A). In April 2015, the patient began adjuvant concurrent chemoradiotherapy, receiving capecitabine and a total radiotherapy dose of 50GY. She continued adjuvant chemotherapy between June and October 2015, completing six cycles of oxaliplatin and capecitabine (CAPEOX).

By October 2018, frequent bouts of cough and chest tightness prompted her return to the hospital. Chest computed tomography (CT) of October 13 showed a mediastinal mass (6.7 cm × 5.0 cm) invading parietal pericardium and left hilum, left obstructive atelectasis, and a metastatic nodule of right lung (Figure 2A and G). A bronchial biopsy was consistent with metastatic rectal cancer, proving positive for CDX2 protein and villin but negative for Napsin A and thyroid transcription factor-1 (TTF-1) in immunostained preparations (Figure 1B). The patient’s serum carcinoembryonic antigen (CEA) level was 11.44 ng/mL (Figure 3), and her condition was fair [Eastern Cooperative Oncology Group (ECOG) performance status of 1]. Based on CT and histologic findings, the diagnosis was stage IV rectal cancer, with mediastinal and lung metastases. A first-line regimen of irinotecan plus 5-fluorouracil/Leucovorin (FOLFIRI) was therefore begun. At the end of the first cycle, the patient experienced grade 3 nausea and vomiting, which abated through parenteral nutrition. On November 7, 2018, a repeat CT scan showed progression of both mediastinal (8.2 cm × 4.4 cm) and right lung lesions, with some accumulation of pericardial fluid (Figure 2B and H). This qualified as progressive disease (PD) by Response Evaluation Criteria in Solid Tumors (RECIST), despite a drop in serum CEA level (9.08 ng/mL) (Figure 3). 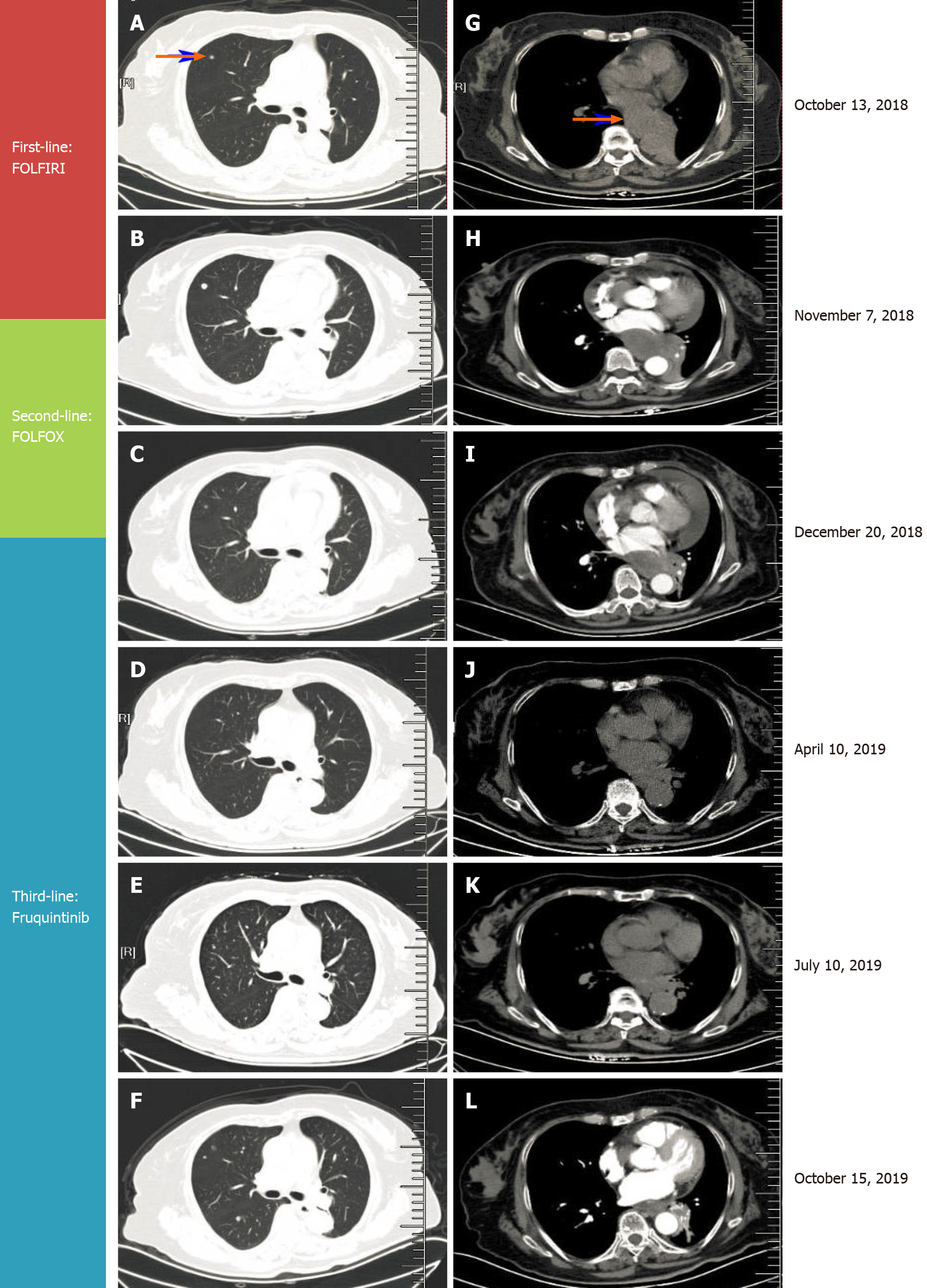 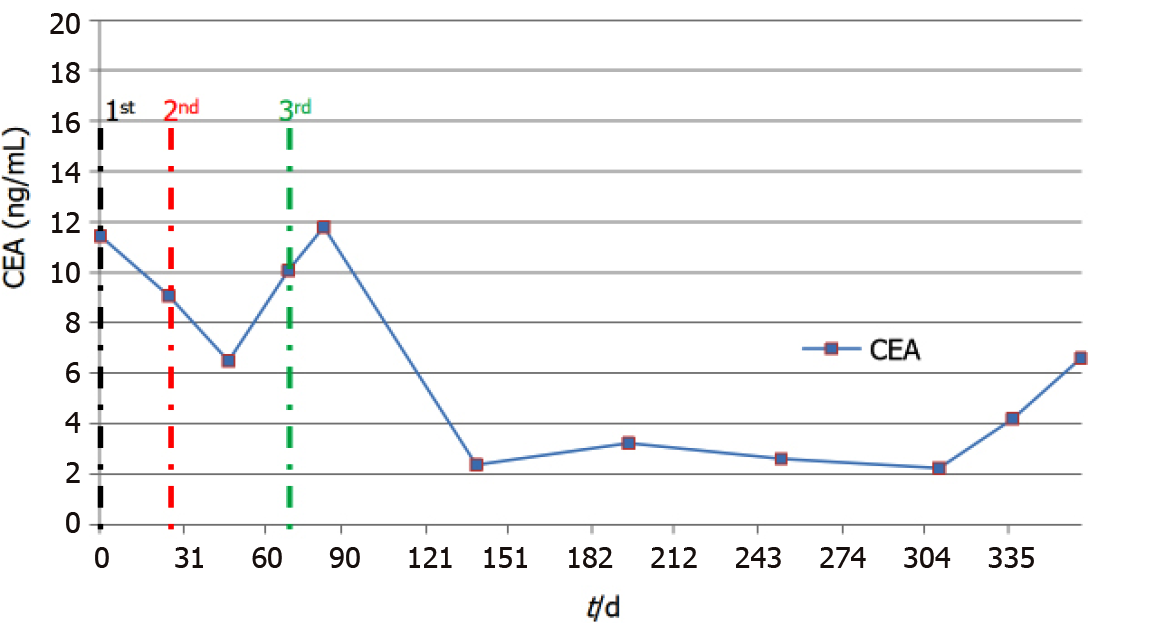 During November 2018, the patient began a second-line FOLFOX regimen, barely completing two cycles before the abrupt onset of dyspnea and tachycardia on December 20, 2018.

The patient had hypertension.

The patient had no history of smoking, drinking, or familial cancers.

The patient’s temperature was 37.0 °C, heart rate was 130 bpm, respiratory rate was 24 breaths per minute, blood pressure was 90/60 mmHg and oxygen saturation in room air was 95%. The clinical examination revealed jugular venous distention and muted heart sounds were evident. 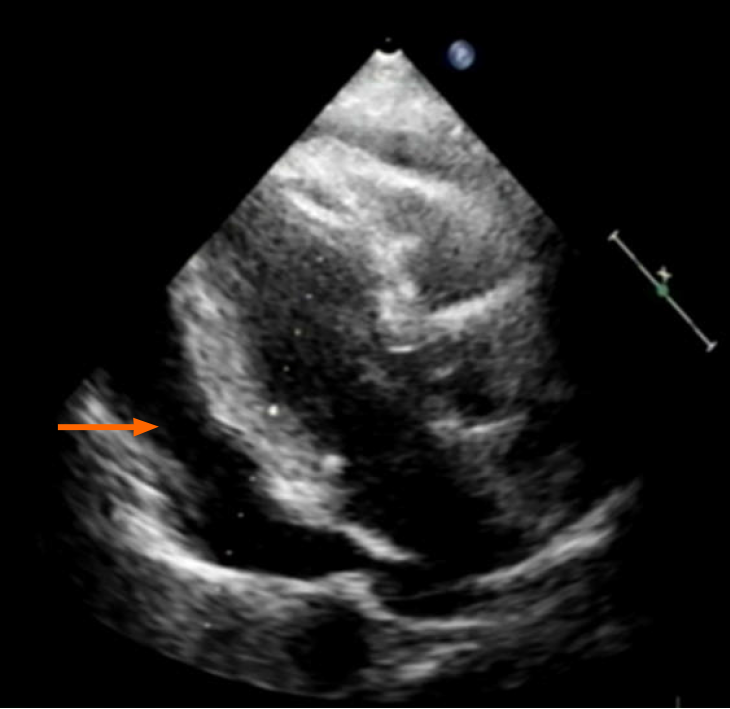 The final diagnosis of the case was NPE due to rectal cancer.

NPE was established, indicating PD (Figure 2C and I) and second-line regimen failure despite shrinkage of mediastinal (5.6 cm × 3.6 cm) and right lung metastases by CT.

On January 3, 2019, the patient began a third-line regimen of single-agent fruquintinib (5 mg once daily, 3 wk on/1 wk off). After 1 wk, hypertension developed (systolic ≤ 160 mmHg; diastolic ≤ 100 mmHg) but quickly resolved through nifedipine use, without altering fruquintinib dosage. A CT scan performed January 10, 2019, showed further shrinkage of the mediastinal metastasis (3.3 cm × 3.2 cm), persistent pericardial effusion, and left pulmonary atelectasis, but the right lung nodule had disappeared. An indwelling pericardial drainage tube was then removed. During the second cycle of fruquintinib, mild hoarseness occurred. It did not impact the quality of life, so fruquintinib was continued at 5 mg daily. On April 10, 2019, a partial remission was achieved, marked by continued shrinkage of the mediastinal mass (3.2 cm × 3.0 cm) and NPE resolution on repeat CT scan (Figure 2D and J). The CEA level was even lower (3.23 ng/mL) (Figure 3), with ECOG performance status still at 1. After 3 mo of continuous treatment, another CT scan showed stable disease, the mediastinal mass unchanged and no recurrence of NPE (Figure 2E and K). A transient grade 2 Leukopenia (WBC count, 2.0 × 109/L) noted on July 26, 2019 was promptly remedied by pegylated recombinant human granulocyte colony-stimulating factor (PEG-rhG-CSF). Fruquintinib dosing remained the same, checking WBCs frequently.

By October 9, 2019, there was overt CT evidence of disease progression, including recurrent NPE, left pulmonary atelectasis, and regrowth of the right lung nodule (Figure 2F and L). An upturn in CEA level (6.59 ng/ mL) (Figure 3) and worsening of ECOG performance status (1→2) were also apparent. We informed the patient of ongoing events, advising her of new therapeutic (i.e. local radiotherapy plus chemotherapy) and BSC options. Ultimately, she was transferred to a palliative care unit for BSC management.

NPE occurs in 5%-15% of patients with advanced cancer, complicating therapeutic strategies[12]. It is often a secondary phenomenon due to metastasis. In a series of patient autopsies, pericardial metastasis resulted from lung cancer (35%), breast cancer (25%), lymphoma or leukemia (15%), and other malignancies (i.e. esophageal cancer, Kaposi’s sarcoma, or melanoma)[13-15]. Pericardial metastasis may result from either direct or blood vascular/Lymphatic spread[16]. Given the inherent lymphatic and venous return of rectal cancers, they often metastasize to lymph nodes, liver, or lungs and rarely involve pericardium[2].

Clinical manifestations of NPE may vary considerably or be absent at times for incidental discovery in sudden deaths. Dyspnea, orthopnea, pain, edema, or even hemoptysis may accompany sizeable effusions. During clinical examinations, jugular venous distention, hepatomegaly, muffling of heart sounds, rubs/murmurs, or electrocardiographic changes are encountered[15]. In a small percentage of cases, cardiac tamponade may ensue[17].

Echocardiography, CT, and magnetic resonance imaging (MRI), are generally used to detect NPE. Because echocardiography is readily available, inexpensive, and free of ionizing radiation, it is deemed the best imaging technique for this purpose[18], enabling both comprehensive gauging of hemodynamic effects imposed by effusions (including cardiac tamponade) and continuous monitoring of pre- and post-treatment fluid volumes. CT and MRI are clearly advantageous for accurate pinpointing of pericardial tumors and assessing adjacent cardiac and non-cardiac structural effects[19]. On the other hand, fluid cytology or pericardial biopsy is essential for a definitive diagnosis of malignancy. Immunohistochemistry is frequently needed to help characterize the antigenicity and nature of cells[20]. In this patient, tumor-derived cells were indeed present in the fluid collected. By comparing outcomes of immunostained cytologic and biopsy specimens, both pericardial and mediastinal manifestations were similarly traced to rectal cancer.

Managing NPE is focused on symptom relief and prevention of recurrence. Pericardiocentesis has dual roles (diagnostic and therapeutic) in symptomatic patients. Without additional treatment, however, NPE will recur at a high rate (up to 40%)[21]. Pericardiectomy, pericardial windows, and sclerotherapy are typically used to prevent recurrent symptomatic effusions[22]; but antineoplastic treatments, including chemotherapy (systemic or local) and radiotherapy, are reportedly quite effective against NPE caused by lymphoma or small cell lung cancer. A retrospective analysis of NPE treatments has credited the longest median OS to systemic therapy. Old age, extrahepatic metastasis, and NPE in midst of progression were considered poor prognostic factors[8]. There are no randomized controlled studies to date, so optimal management of NPE has yet to be determined. Especially in elderly patients with symptoms or with metastatic disease, optimal management of NPE is truly a personalized process.

In the past decade, targeted molecular therapy has become a promising strategy for effective clinical treatment of NPE due to various tumors: Pericardial perfusion of bevacizumab, a VEGF inhibitor (median OS, 168 d; range, 22-224 d), as one example[23]. Panitumumab is an anti-EGFR monoclonal antibody used to successfully treat cardiac metastasis of colonic adenocarcinoma[24], and the anti-EGFR TKI, gefitinib, has shown good anti-tumor effect against NPE linked to adenocarcinoma of the lung. Once initiated in our patient, the time-to-recurrence of NPE was 279 d for fruquintinib. It surpassed bevacizumab in progression-free survival and was well tolerated by an elderly woman with a high ECOG score. The convenient oral formulation also limits potential infectious complications of otherwise invasive therapies. We believe this is the first reported use of an anti-VEGFR TKI in effectively treating NPE due to rectal cancer. This novel molecular agent may well herald a new strategy for targeting NPE in patients with CRC.

NPE is rarely caused by rectal cancer but must be considered if cardiopulmonary symptoms and a voluminous pericardial effusion coexist. Fruquintinib may provide good survival benefit in elderly patients with NPE due to rectal cancer.