Caudate lobe hemangioma of the liver is relatively rare. Due to the unique anatomical location of the caudate lobe, the caudate lobectomy accounts for only 0.5% to 4% of hepatic resection, which is difficult to operate and takes a long time, and even has many postoperative complications.

A 34-year-old female presented with a 1 year history of intermittent pain in the right side of the waist without obvious inducement. All laboratory blood tests were within normal limits. Indocyanine green 15 min retention was rated 2.9%, and Child-Pugh was rated A. Computed tomography and magnetic resonance imaging diagnosed giant hemangioma of the caudate lobe with hemangioma of left lobe of liver. After discussion, surgical treatment was performed, which lasted 410 min, with intraoperative bleeding of about 600 mL and postoperative pathological findings of cavernous hemangioma. There were no obvious postoperative complications, and the patient was discharged 10 d after surgery.

Core Tip: Caudate lobe hemangioma of the liver is rare. Due to the unique anatomical location of caudate lobe, the caudate lobectomy is difficult to operate, takes a long time and has many postoperative complications. We report a case of a giant hemangioma of the caudate lobe with left lobe hemangioma with a left hemangioma in a 34-year-old female. After completing the relevant examination, the surgical treatment was performed. The patient’s condition was stable, and she was discharged 10 d after the operation. This report can help reduce the risk of controlled surgery, prevent the occurrence of postoperative complications and benefit patients.

A 34-year-old female presented with a 1 year history of intermittent pain in the right side of the waist without obvious inducement.

She did not notice other symptoms such as nausea and vomiting, chills, high fever, chest tightness, frequent urination, urgency of urination and painful urination. In the recent 2 mo, the above symptoms gradually worsened, and she was admitted to our hospital.

She had no previous history of viral hepatitis B or cirrhosis and denied smoking or drinking. She also had no other history of past illness.

Her parents are currently in good health and are not suffering from any illnesses. There is no history of inheritance in the family.

Clinical examination showed that there was no obvious abnormality.

All laboratory blood tests were within normal limits. Indocyanine green 15 min retention was rated 2.9%, and Child-Pugh was rated A.

Abdominal computed tomography (CT) showed that multiple nodules and abnormal lumpy low-density shadows could be seen in the liver parenchyma, in which the larger ones were located in the left lobe and caudate lobe of the liver, with a size of about 9.5 cm × 6.3 cm and 8.1 cm × 6.5 cm (Figure 1A and 1B). Abdominal magnetic resonance imaging revealed multiple space-occupying lesions in the liver. Combined with enhanced CT scan, hemangioma was considered. Compression of the main portal vein and right portal vein were noted, and the inferior vena cava narrowed (Figure 1C and 1D). The total liver volume was about 1739 cm3, the lesion liver volume was about 571 cm3, and the residual liver volume was about 1168 cm3 (Figure 1E).

After completing the relevant examination, the surgical treatment was performed. After the success of the anesthesia, the patient supine and the conventional disinfection draping, the right side of the inverted L under the costal margin incision was about 30 cm long was taken. Into the abdomen, after probing the left lobe and caudate lobe of the liver, the left lobe neoplasms were 9.5 cm × 7.0 cm and 8.0 cm × 7.0 cm and solid, with the boundary clear and soft. It was considered a huge liver hemangioma during operation. We decided to resect the left liver lobe and caudate lobe. We fully dissociated the hepatic round ligament, dissected the hepatic duodenal ligament and separated and ligated the Glisson sheath of the left liver. At the same time, intraoperative ultrasonography was used to monitor the boundary between the focal liver and normal liver tissue. A clear ischemic line could be seen on the surface of the liver, the liver surface was marked with an electric knife, and the hilar interdiction zone was placed at the ligamentum hepatica. Ultrasonic knife carefully freed the liver neoplasm surrounding adhesion, exposed the inferior vena cava, fine dissected ligation of the third porta hepatis including short hepatic vein and blocked the blood supply in the fourth porta hepatis. The left hepatic vein, right hepatic vein and middle hepatic vein could be seen after gradual separation to the second porta hepatis. The whole process can show the inferior vena cava (Figure 2A). The porta hepatica blocking band was tightened after the establishment of the posterior inferior vena cava channel of the liver, and the first porta hepatis was blocked for 15 min for four times. The tissues of the left lobe and caudate lobe were gradually cut off with ultrasonic knife and cavitron ultrasonic surgical aspirator (CUSA). The liver wound was stanched by CUSA and bipolar electrocoagulation. Two rubber drainage tubes were placed after no bleeding was observed, and the abdomen was closed layer by layer after the dressing of the apparatus was counted. The operation lasted 410 min, and the intraoperative bleeding was about 600 mL. 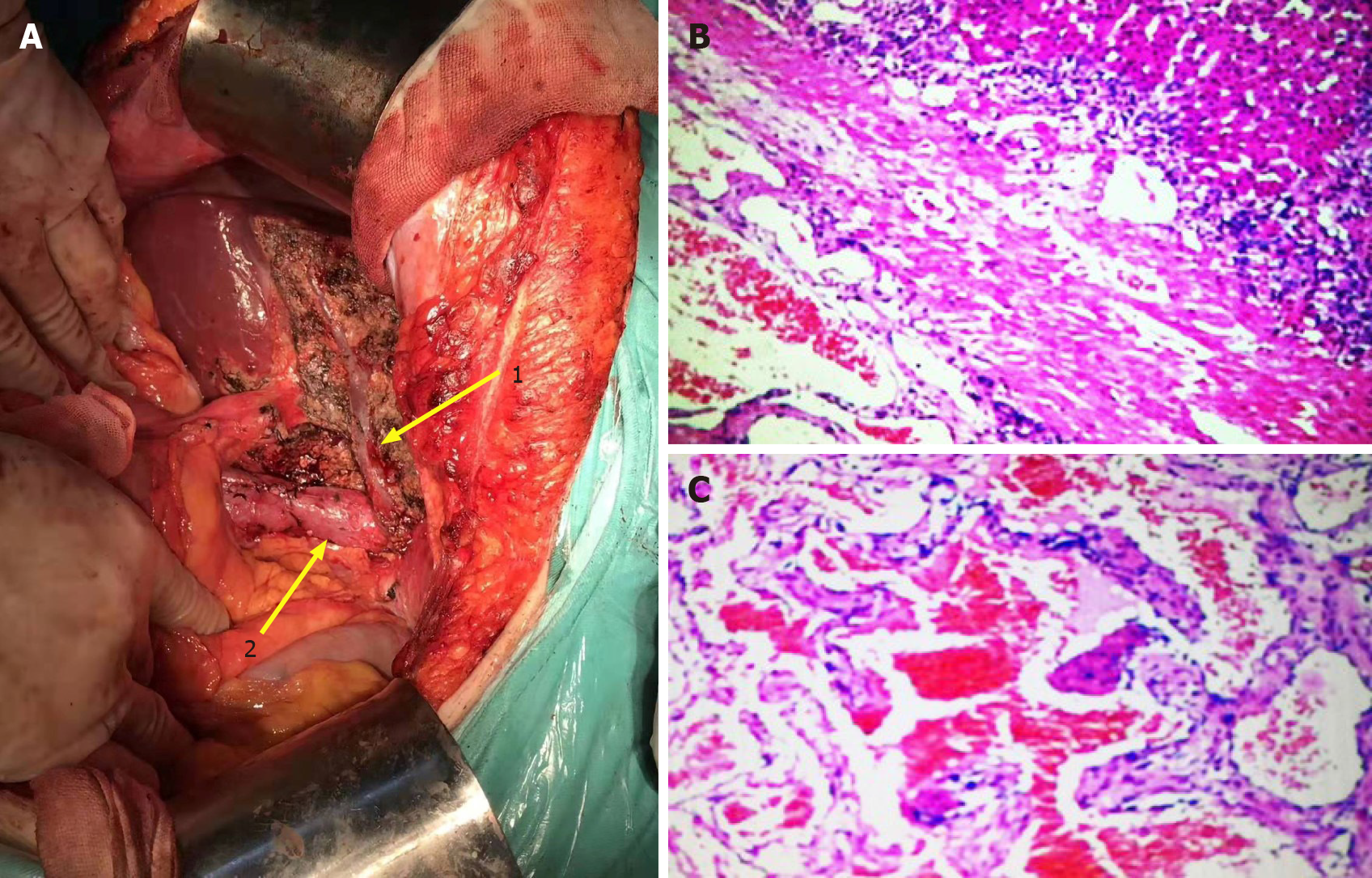 Figure 2 Images from the operation and pathology images after operative treatment. A1: Middle hepatic vein; A2: Inferior vena cava; B and C: Cavernous hemangioma.
OUTCOME AND FOLLOW-UP

After the operation, the patient was given liver protection, anti-inflammatory, hemostasis and other symptomatic support treatments. The patient’s condition was stable and improved, and she was discharged 10 d after the operation.

The clinical manifestations of hepatic hemangioma are related to the size and location of the lesion as well as whether the tumor is ruptured, and its symptoms are mainly manifested as compression symptoms caused by the oversized tumor[3]. Common clinical symptoms are abdominal pain and discomfort, nausea and vomiting, loss of appetite, dyspepsia, fever, jaundice and so on. When the hemangioma tumor is large, there is also a risk of rupture and bleeding. The auxiliary examinations for the diagnosis of hepatic hemangioma mainly include abdominal ultrasound, CT and magnetic resonance imaging. Currently, surgery is considered to be the preferred treatment for hepatic hemangioma with a diameter of > 4 cm that can cause discomfort or pain in the upper abdomen[13]. In addition to considering operative feasibility before operation and prognosis of patients after liver resection, the residual liver volume should be calculated for evaluating residual liver compensated liver metabolic activity, and compensated liver metabolic activity of the residual liver volume should be at least a third of the total liver volume[14]. In this case, the patient suffered from intermittent right abdominal pain. According to abdominal CT and magnetic resonance imaging examination, giant hemangioma of the caudal lobe and left lobe of the liver was found, which had a maximum diameter of 9.5 cm and 8.1 cm, respectively. The residual liver volume accounted for 67.1% of the total liver volume, which was in line with the standard of surgical resection and could be treated surgically.

Caudate lobectomy is a challenging operation in hepatobiliary surgery due to its deep anatomical location and proximity to important vascular systems such as the inferior vena cava, portal vein and hepatic artery[15]. Although the surgical and technical level has been greatly improved in recent years, it is also particularly important for hepatobiliary surgeons to have accurate knowledge of liver anatomy and rich experience in surgical resection, no matter for laparotomy or laparoscopic operation.

The difficulty of caudate lobectomy is the difficulty of exposure. Insufficient exposure will increase the possibility of bleeding. Adequate exposure of the caudate lobe, hepatic hilum and corresponding vessels is an important way to reduce intraoperative bleeding and a guarantee for safe operation. In this case, the intraoperative hemorrhage was about 600 mL, and the main hemorrhage was at the end of the separation of the second hepatic hilum. A blood opening was torn in the middle hepatic vein. Due to sufficient exposure in the early stage, the first-hand surgical assistant immediately pinched the bleeding mouth with his fingers, and the surgeon used 4-0 vascular suture line for suture hemostasis, thus avoiding intraoperative death of the patient due to massive hemorrhage. The Pringle maneuver is mainly used to block blood flow in the hepatic artery and portal vein, which is still one of the recognized effective methods to control bleeding in hepatectomy[20]. Conventional time of the Pringle maneuver is 10-20 min. However, a current clinical randomized controlled trial indicated that intermittent 30 min of the Pringle maneuver is also safe and feasible[21]. In this case, in addition to using bipolar electrocoagulation and CUSA and other equipment and instruments to reduce the amount of blood loss, the Pringle maneuver was also used to control the bleeding, which was used four times in total, each time for 15 min.

Postoperative biochemical examination of the patient showed no liver function damage. In addition, regarding effective control of bleeding problems in liver resection, Li el at[22] found the portal vein area could see a number of portal vein tiny branches. Handling these branches can be affected by any carelessness, which leads to more difficulty to control bleeding. These branches are named porta short veins, and the porta short veins are most common in the caudate lobe. The fourth porta hepatis anatomic concept has presented and used to reduce intraoperative bleeding and improve operation safety[22]. Furthermore, the middle hepatic vein is located in the middle plane of the liver. By exposing the middle hepatic vein and reaching the inferior vena cava along its path, it can avoid damage to the intrahepatic portal vein and avoid uncontrollable bleeding[23]. In this case, the short hepatic vein of the third porta hepatis and the porta short vein of the fourth porta hepatis were carefully ligated, and the middle hepatic vein was exposed to reduce blood loss during operation.

Liver resection surgery usually places abdominal drainage tubes under the right diaphragm or liver section. The main function of the abdominal drains is to judge whether there is bleeding, infection, bile leakage and other complications under the diaphragm and in the liver section of the patient after surgery. The abdominal drains can also drain the blood and necrotic tissue of the patient so as to prevent postoperative abdominal infection[24]. Though some scholars think abdominal cavity drainage tubes did not reduce the incidence of postoperative complications[24,25]. In this case, in addition to removing a larger liver volume, distribution of the liver short vein and porta short vein of the caudate lobe was relatively dense. In order to prevent postoperative complications such as bleeding, bile leakage and intra-abdominal infection, the operator placed two rubber drainage tubes under the right diaphragm or liver section after stanching by CUSA and bipolar electrocoagulation. The drainage tube under the diaphragm was removed on the third day, and the hepatic section drainage tube was removed on the fifth day.