Research Domain of This Article
Anatomy and Morphology

Inverted papilloma is an uncommon neoplasm in the nasal cavity. It is a histologically benign tumor, but has a high recurrence and local invasion rate. In addition, nasal or skull base lymphoma is another rare neoplasm. The coexistence of these two tumors in one case makes the diagnosis and related treatment difficult.

We report a case of an immunocompetent patient, who had a history of inverted papilloma 20 years ago. The patient presented with an infiltrated mass lesion in the nasal cavity with extension to the frontal base. The repeated biopsies revealed inverted papilloma without any malignant transformation. After the patient underwent a frontobasal craniotomy with total tumor excision, the final pathological examination revealed nasal inverted papilloma coexisting with diffuse large B-cell lymphoma of the skull base.

Based on this case report, while managing a case of an aggressive recurrent inverted papilloma, not only squamous cell carcinoma transformation, but also other invasive malignancy, such as lymphoma, should be considered.

Core Tip: Inverted papilloma is a neoplasm in the nasal cavity and has a high local invasion rate. In addition, nasal or skull base lymphoma is another rare neoplasm. The coexistence of these two tumors in one case makes the diagnosis and related treatment difficult. We report a case of an immunocompetent patient presented with an infiltrated mass lesion in the nasal cavity with extension to the frontal base. The pathological examination revealed nasal inverted papilloma coexisting with diffuse large B-cell lymphoma of the skull base. This is the first case of a coexisted nasal inverted papilloma with skull base lymphoma.

Inverted papilloma is an uncommon tumor in the sinonasal cavity, accounting for 0.5%-4% of all primary nasal tumors[1,2]. It mainly arises from the lateral nasal wall, with epithelial cells growing into the underlying supportive tissues. It can also develop into the adjacent structures, such as the paranasal sinus, oro- or nasopharynx, and intracranium. Furthermore, it has the potential of malignant transformation into squamous cell carcinoma. Only a few cases of inverted papilloma with intracranial involvement have been reported, most of them were recurrent cases[3,4]. It is a histologically benign tumor but has a high recurrence and local invasion rate. Primary central nervous system lymphoma (PCNSL), arising from the brain parenchyma, spinal cord, eyes, and cranial nerves, accounts for 4% of all intracranial lymphoma[5]. Majority of PCNSL is diffuse large B-cell lymphoma, which is the most common type of non-Hodgkin’s lymphoma[5]. Skull base lymphoma is rare, and most of the reported cases were found in immunocompromised patients[6,7].

An 85-year-old man presented with a painful swollen right eye and headache of 1 mo.

The patient complained of insidious onset of the painful and swollen right eye one month ago.

The patient was diagnosed with nasal inverted papilloma 20 years ago for which he underwent surgical resection. There had been no evidence of recurrence during the first 5 years of postoperative follow-up. He lost the vision in his right eye 5-6 years ago because of atrophy of the optic nerve.

Personal and family history was not contributory.

The patient had a 2 cm × 1 cm palpable solid mass over the left orbital bar, watering of the right eye and proptosis with total blindness, while the remaining neurological examination was unremarkable. 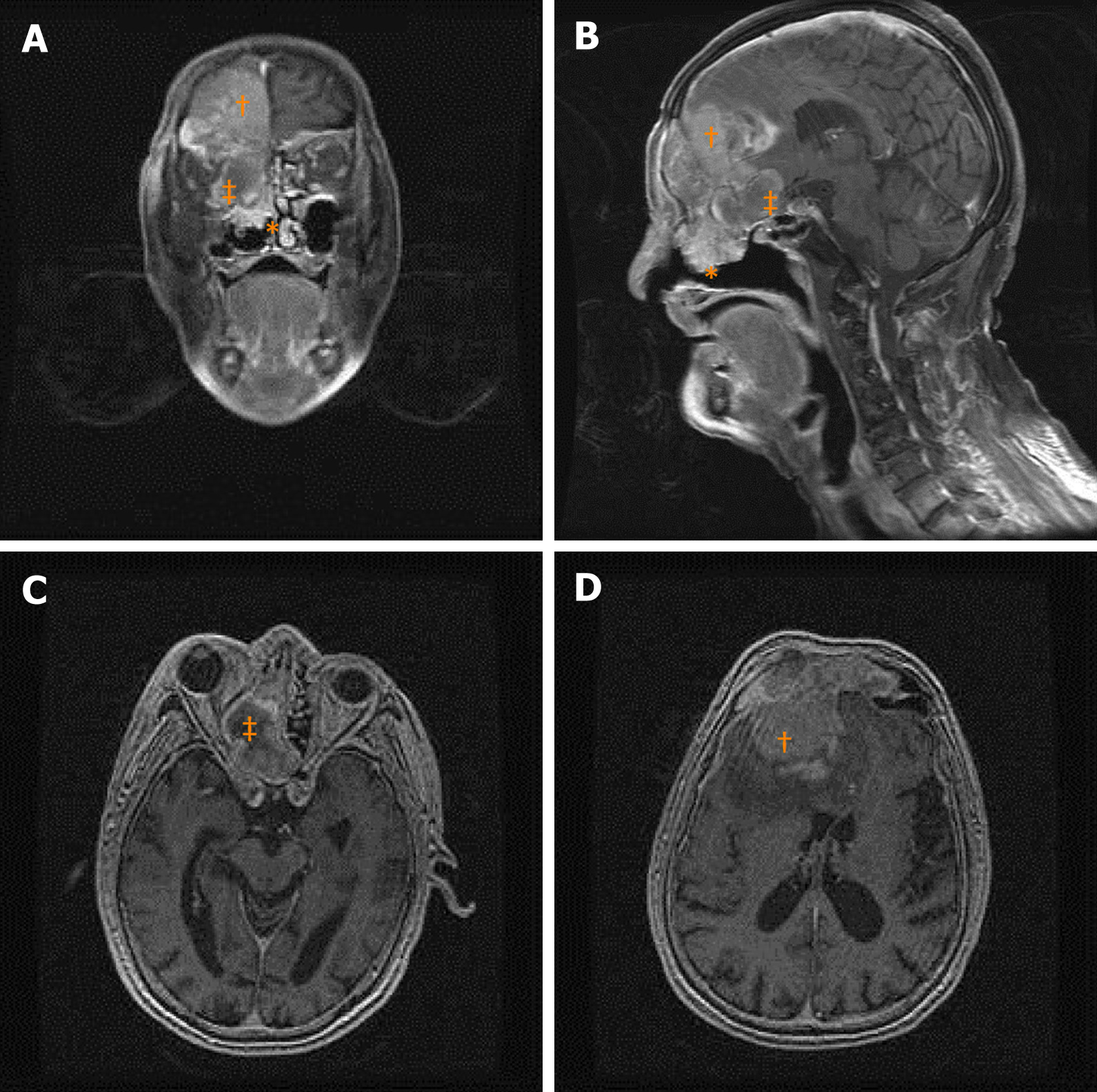 Figure 1 Magnetic resonance imaging of the head with contrast showed a heterogeneously enhanced mass involving the right nasal cavity (asterisk), orbital cavity, and bilateral frontal sinus with intracranial invasion (cross), and another lobulated fluid collection, suspected as a mucocele, at the right ethmoid cells (double-cross). A: Coronal section; B: Sagittal section; C: Axial section of the magnetic resonance imaging, which showed the orbital cavity invaded and compressed by the lesion (double-cross) from the medial side; D: Bilateral frontal sinuses that were involved by the lesion.
FINAL DIAGNOSIS 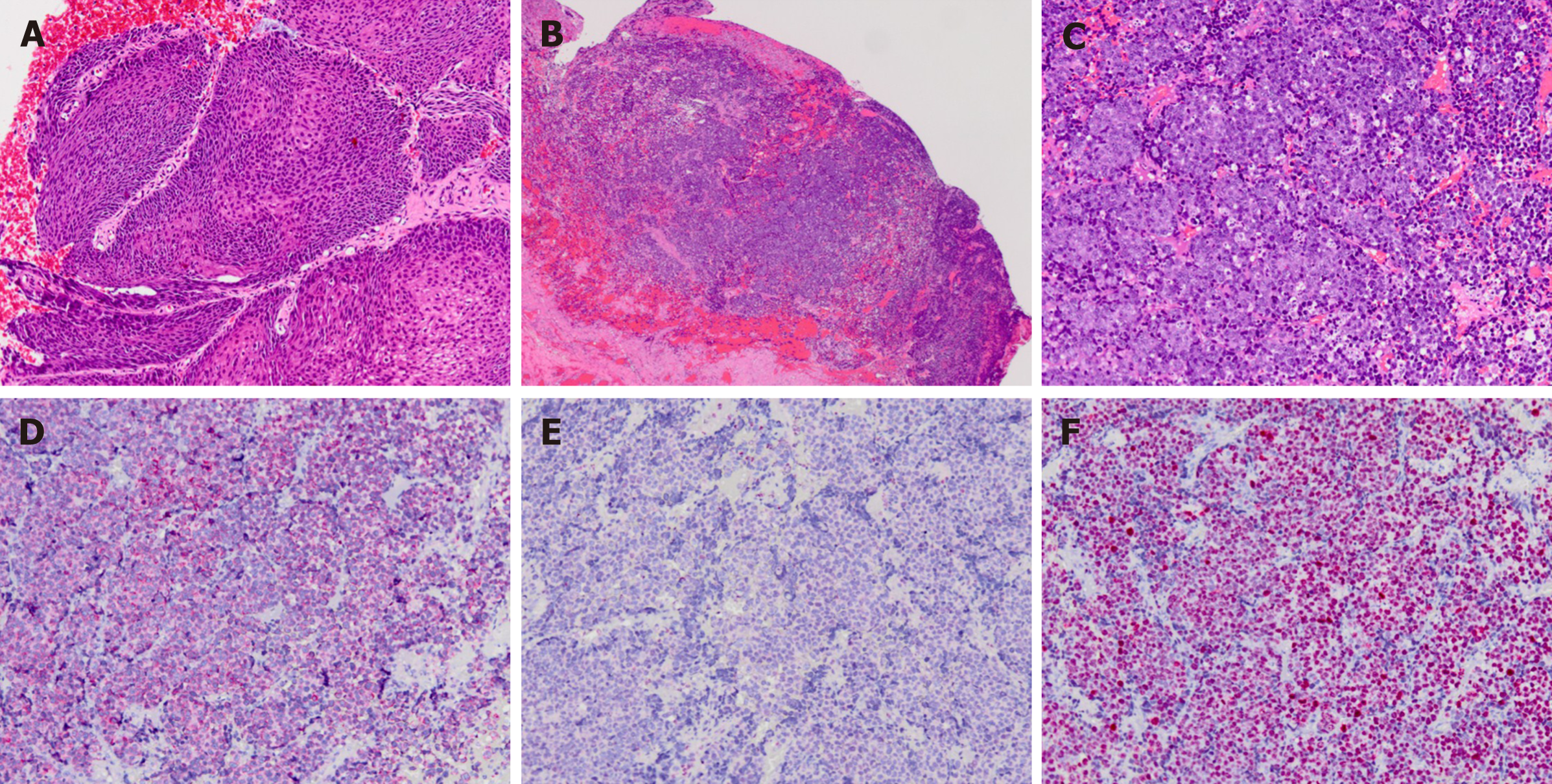 Figure 2 Histological examinations. A and B: Hematoxylin and eosin (H/E, 20 ×) sections showed an inverted papilloma with an inward growth pattern, which is composed of the proliferating columnar and squamous epithelial cells; C: H/E (100 ×) section showed medium to large tumor cells with oval to round shape, occasional poly-lobulated, vesicular nuclei containing fine chromatin and several nuclear membranes, with bound nucleoli infiltrating within the nasal stroma and brain tissue; D: Immunohistochemically, the tumor cells were positive for Bcl-2; E: Immunohistochemically, the tumor cells were negative for Bcl-6; F: The Ki-67 index was approximately 90%-95%.
TREATMENT

Assuming the diagnosis of recurrent inverted papilloma with intracranial extension a frontobasal craniotomy with tumor excision and skull base reconstruction was performed. Intraoperatively, after frontobasal craniotomy, we found a giant mucocele growing from the frontal sinus with a downward extension to the ethmoid sinus, which resulted in severe compression of the lateral optic canal and orbital cavity. After frontal durotomy, we removed a hypervascular elastic tumor with the brain tissue, underlying dura, and bone infiltration. This lesion also grew into the nasal cavity. Subsequently, another well-defined, encapsulated mass was retracted from the right nasal cavity.

The patient died 2 mo after the surgery because of pneumonia with sepsis.

To the best of our knowledge, this is the first case of a recurrent nasal inverted papilloma coexisting with skull base non-Hodgkin’s lymphoma. Although the final diagnosis was unexpected, the full clinical course may delineate this unexpected result retrospectively. First, recurrent right nasal inverted papilloma obstructed the orifices of the ethmoid and frontal sinuses; therefore, eliciting the formation of mucocele subsequently. The growing mucocele further compressed the optic nerve and caused its atrophy. Finally, the coexisting skull base lymphoma with rapid growth prompted the painful proptosis[6].

Anatomically, the anterior skull base is located between the frontal base and sinonasal sinuses, which makes it difficult to identify the exact origin of the tumor. Most of the sinonasal lymphomas arise in the maxillary sinus (80%), only < 1% originate in the frontal and sphenoid sinuses[6]. Therefore, the bony destruction of frontal sinus and the frontal lobe invasion, observed in our case could be either from PCNSL or sinonasal lymphoma. Moreover, both the tumors are highly aggressive and rare in occurrence; however, the sinonasal lymphoma occurs in younger adults (average 49 years) and PCNSL occurs in older ones (> 60 years)[5,6]. Regarding the tumor origin from the anterior cranial fossa, it can invade the surrounding cranial nerves, which may result in vision loss and cavernous sinus syndrome. Because of its rarity, there is no pathognomonic feature detected in computed tomography and MRI[8,9]. Surgical biopsy is the only diagnostic modality. Chemoradiotherapy is the mainstay of treatment for lymphoma. But PCNSL has a worse outcome than that outside the central nervous system.

In contrast to chemoradiotherapy for lymphoma, surgical excision is the standard treatment for primary inverted papilloma. With the advancement of endoscopic surgical techniques, most of the inverted papilloma can be excised with the endoscopic assistance. Regarding the cases with recurrent tumors or even cases with intracranially extended lesions, repeated surgical resection remains the choice of treatment[1,4]. The effect of radiotherapy is still controversial.

The significant difference in the pathological results and treatment of inverted papilloma and lymphoma made the prompt diagnosis and definite treatment in this case difficult. Based on our limited experience, while managing a case of an aggressive recurrent inverted papilloma, not only squamous cell carcinoma transformation, but also invasive malignancy, such as lymphoma, should be considered.