Rhabdomyosarcoma (RMS) is a rare malignant tumor of mesenchymal origin that mainly affects children. Spindle cell/sclerosing RMS (SSRMS) is even rarer. It is a new subtype that was added to the World Health Organization disease classification in 2013. To the best of our knowledge, this is the first reported case of adult SSRMS disease classification originating in the temporal muscle.

SSRMS originating in the temporal muscle of a male adult enlarged rapidly, destroyed the skull, and invaded the meninges. The tumor was completely removed, and the postoperative pathological diagnosis was SSRMS. Postoperative recovery was good and chemotherapy and radiotherapy were given after the operation. Followed up for 3 mo, no tumor recurred.

RMS is one of the differential diagnoses for head soft tissue tumors with short-term enlargement and skull infiltration. Preoperative computed tomography or magnetic resonance imaging is necessary for early detection of tumor invasion of the skull and brain tissue.

Core Tip: Rhabdomyosarcoma (RMS) is a rare malignant tumor of mesenchymal origin that mainly affects children. Spindle cell/sclerosing RMS (SSRMS) is even rarer. We describe an adult case of SSRMS originating in the temporal muscle. The tumor rapidly enlarged, destroyed the skull, and invaded the meninges. The tumor was completely removed. The postoperative pathological diagnosis was SSRMS. This case report provides complete imaging data of tumor progression. To our knowledge, this case is the first reported adult SSRMS originating from the temporal muscle.

Rhabdomyosarcoma (RMS) is a rare, highly aggressive, rapidly growing mesenchymal malignancy that is more common in children[1]. Spindle cell/sclerosing RMS (SSRMS) is even rarer. It is a new subtype that was added to the disease classification of the World Health Organization (WHO) in 2013. RMS mainly occurs in the head and neck area[2]. It is very rare that RMS originates from the temporal muscle. We report a case of adult SSRMS that originated from the temporal muscle, destroyed the skull, and invaded the dura mater. As far as we know, there have been no previous reports of a case like this one.

A 55-year-old male patient was admitted to our hospital with a lump in the left temporal region.

Two months prior to admission, the patient noticed a lump in his left temporal scalp. The patient had no headaches or nausea and vomiting. The patient came to the outpatient department. A computed tomography (CT) scan was done and surgery was recommended, but the patient refused. The tumor grew slowly.

The patient had a 2-year history of hypertension.

The patient had a 10-year history of smoking. He denied any family history.

Physical examination revealed a 6 cm × 7 cm hard, painless mass in the left temporal region. There was no redness or swelling on the surface of the mass.

Figure 2 Computed tomography shows a soft tissue mass in the left temporal region and destruction of the adjacent skull. 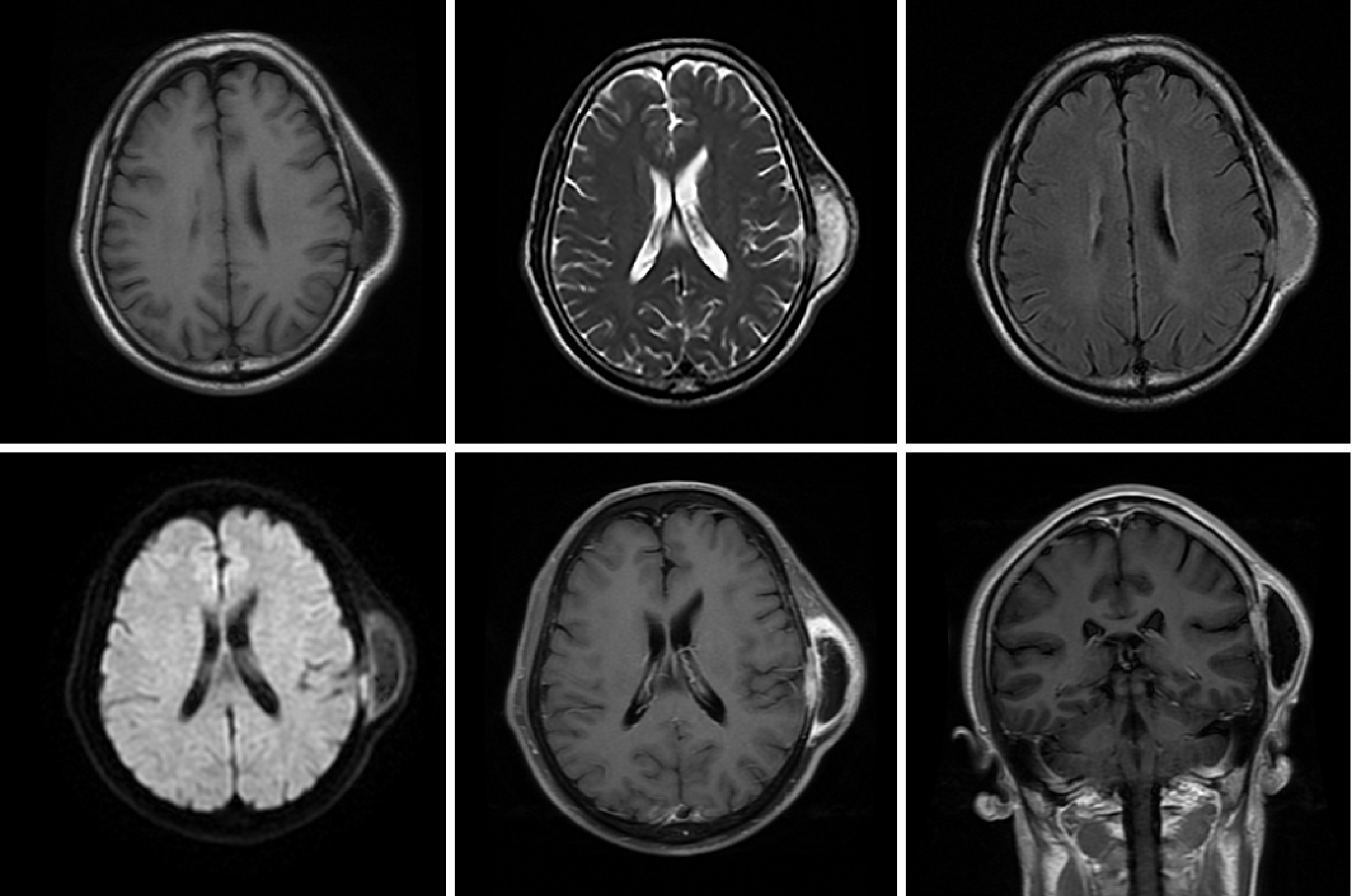 Figure 3 Magnetic resonance imaging shows a mass in the left temporal muscle, with obvious enhancement around the tumor, but no enhancement in the center of the tumor.
FINAL DIAGNOSIS

The patient was admitted to our hospital with a diagnosis of left temporal soft tissue sarcoma, and metastatic tumor could not be ruled out. The pathology finding was SSRMS.

The tumor was resected. During the operation, it was found that the tumor originated from the temporal muscle and had destroyed the skull and invaded the meninges. The tumor was completely removed with negative margins, and part of the skull and meninges were removed. Pathological evaluation of intraoperative frozen sections revealed malignant tumors, so cranioplasty was not performed. Chemotherapy and radiotherapy were given after the operation. Eight cycles of vincristine, ifosfamide, and etoposide were planned. A total of 50.4 Gy of radiation was administered. 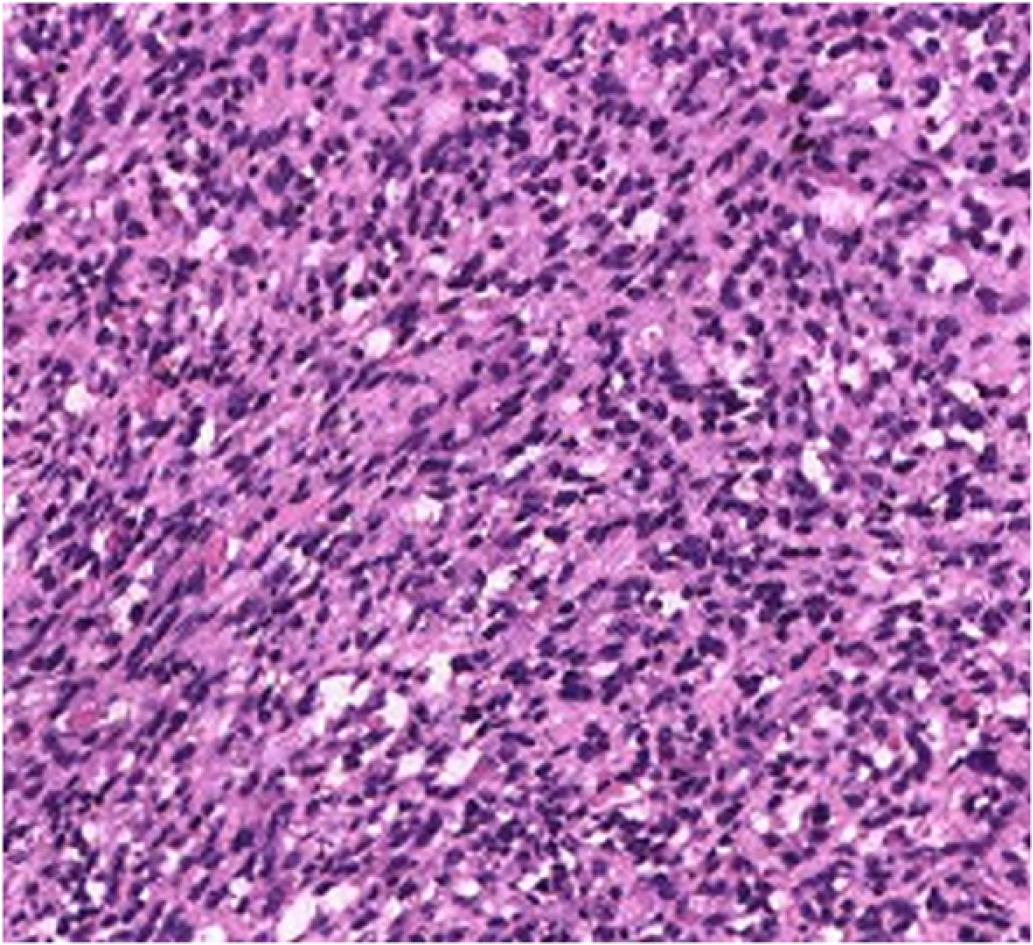 Figure 4 Pathological examination revealed a tumor composed of mildly atypical spindle cells arranged in a crossed bundle or spiral, and with a few rhabdomyoblasts scattered among the spindle cells (hematoxylin and eosin, × 200).

RMS can originate from primitive mesenchymal cells anywhere in the body. Interestingly, most RMS tumors do not occur in muscles, but in areas where there is no muscle[2]. About 40% of RMSs occur in the head and neck region[2], followed by the urogenital tract, retroperitoneum, and limbs. The most common origins of head RMS are the orbits, nasopharynx, paranasal sinuses, middle ear, and external auditory canal[2,7]. The orbit is the most common single primary site[8]. This case originated from the temporal muscle, destroyed the skull, and invaded the meninges. Adult RMS is very rare in clinical practice. As far as we know, no similar case has been reported in the literature.

Traditionally, three main RMS subtypes, embryonic, alveolar, and polymorphic, are recognized. However, other variants have been described, including SSRMS[9]. SSRMS was added to the WHO disease classification in 2013. This case was diagnosed as SSRMS based on pathological findings and immunohistochemistry. RMS mostly manifests as a rapidly increasing mass that can invade nearby tissues and metastasize to distant sites. The main clinical features of this case of RMS were a fast-growing painless temporal muscle mass, destruction of the skull, invasion of meninges, and normal skin. The imaging findings of SSRMS have definitive characteristics. In this case, enhanced MRI showed obvious enhancement around the tumor, but the tumor center had an extremely low signal, and no enhancement, similar to the characteristics described by Freling et al[10].

RMS usually requires a variety of treatment modalities, depending on the tumor location, size, and metastasis[11]. It is usually recommended to completely remove the tumor if surgery will not cause significant loss of function[12]. Survival is better if a definite negative surgical margin is achieved[13], but in many cases, the tumor cannot be completely removed, and only biopsy is possible. The prognosis of RMS is related to age, site of origin, tumor size, and metastasis[14,15]. Chemotherapy can shrink tumors and reduce large tumors that cannot be completely resected to the extent that they are easier to remove[11]. RMS can easily metastasize to the bone marrow, and some small tumors that cannot be detected by imaging examinations may have spread to other parts of the body, which is why chemotherapy is needed[16]. Positive margins after MRS surgery will result in a higher local failure rate[17]. Radiotherapy can reduce the local failure rate after MRS surgery. Studies found that in patients receiving radiotherapy, there was no correlation between positive margins and local recurrence[17].

The prognosis of RMS is significantly improved by more aggressive comprehensive treatment. The 5-year disease-free survival rates of early and late localized tumors are 81%[18] and 41%[19] respectively. Maurer et al[20] reported that the 5-year survival rates were 92% for orbital tumors, 81% FOR non-parameningeal tumors, and 69% FOR parameningeal tumors. If RMS invades the meninges, brain, and cranial nerves, the prognosis is extremely poor, often with rapid recurrence after surgical resection[21] and a median survival of 5-9 mon[22]. Among the reported cases, there was no 5-year survival[23,24]. In this case, chemotherapy and radiotherapy were still given even though although the tumor was completely resected because the tumor had invaded the meninges. Some authors recommend radical resection supplemented with radiation and chemotherapy[25].

Adult SSRMS originating in the soft tissues of the scalp is very rare. To our knowledge, this is the first reported case of SSRMS originating from the temporal muscle in an adult. It destroyed the skull and invaded the meninges. RMS is one of the differential diagnoses for head soft tissue tumors with short-term enlargement and skull infiltration. Preoperative CT or MRI is necessary for early detection of invasion of the skull and brain tissue.