Femoral neck stress fractures (FNSFs) are commonly found in long-distance running athletes. For FNSFs, early diagnosis and proper treatment are important. The objective of this study was to report FNSFs that occurred after excessive exercise using trampoline in middle-aged women.

The patient was a 43-year-old woman who exercised jumping on a trampoline for 6 wk for 1-3 h a day to diet. Exercise includes repeated flexion-extension of the hip joint. The patient was admitted to the hospital due to sudden bilateral groin pain that occurred suddenly during a trampoline exercise. Hip magnetic resonance imaging (MRI) revealed bilateral FNSFs. After 2 wk of follow-up with conservative treatment, the pain slightly decreased. However, it did not disappear completely. It was determined that it was difficult to control symptoms only by conservation treatment. Thus, closed reduction and internal fixation using a cannulated screw were performed for the more painful left hip joint. After operation, the pain was improved. Walking using crutches was possible. Follow-up MRI showed that the right femoral head signal was decreased compared to the left femoral head signal. Therefore, nonsteroidal anti-inflammatory drug and conservative treatment were provided.

In middle-aged people, excessive trampoline exercise can repeat hip flexion and extension for a short period of time, leading to FNSFs.

There is a growing interest in weight loss in middle-aged population worldwide. Various diets and exercise methods have been developed for weight loss. In particular, effects of Tabata exercise (continuously and repeatedly performing aerobic exercise and strength exercise) have been reported[1,2]. However, excessive exercise can harm the body for middle-aged people and the elderly who lack the habit of exercising. Typical damages are femoral neck stress fractures (FNSFs) that can occur when running long distances such as marathons[3,4]. The most common symptom of FNSFs is hip or groin pain that begins slowly. The pain will intensify with activity or exercise. However, the pain will relieve with rest[5-7]. Pain most commonly occurs in the anterior groin area (in 87% of patients in one study)[8].

Due to the recent coronavirus disease 19 pandemic, it has become difficult to exercise in a gym or in a space where a large number of people gather. Thus, interest in diet exercises that can be done at home is increasing. Among several exercises, trampoline diet exercise is rapidly increasing in South Korea. The trampoline diet exercise is an aerobic exercise that can strengthen lower extremity muscles and core muscles by repeatedly jumping high while taking a flexion-extension posture of the hip joint on the trampoline. However, most studies on injury after trampoline exercise are mostly studies on injury in children caused by falls or direct bruising[9].

This study reports a case of a stress fracture of the femoral neck due to repetitive hip flexion-extension posture on a trampoline in a middle-aged person. Such case has not been previously reported.

A 43-year-old female patient was admitted to the hospital due to sudden bilateral groin pain.

Two months ago, this patient purchased a trampoline for diet purpose and performed a jump exercise for 1 to 3 h per day for 6 wk at home. This exercise is a repetitive flexion-extension of the hip joint while jumping on a trampoline. The patient learned this exercise through the internet. The patient was admitted to the hospital due to sudden pain in both sides of the groin during trampoline exercise.

There was no specific underlying disease.

She had no specific history of trauma or underlying disease.

Blood tests did not show any suspicious findings of infection.

Simple radiography showed no fracture around the hip joint. Herniation pit, a small thin sclerotic rimmed radiolucent lesion of the left femoral head, was identified (Figure 1). L-spine X-rays and magnetic resonance imaging (MRI) were taken under suspicion of problems in the lumbar spine. However, no specific findings were found. No specific findings were found on the lumbar spine X-ray. A bulging disc between L-3-4-5 was found on the MRI. However, specific lesions that could cause pain in the groin area were not identified. Hip MRI was taken to evaluate the hip joint or pelvic area for pain that persisted one week after lumbar MRI. Hip MRI showed signal elevation of both femur necks in T2 image. Incomplete stress fracture of both femur necks was diagnosed (Figure 2). 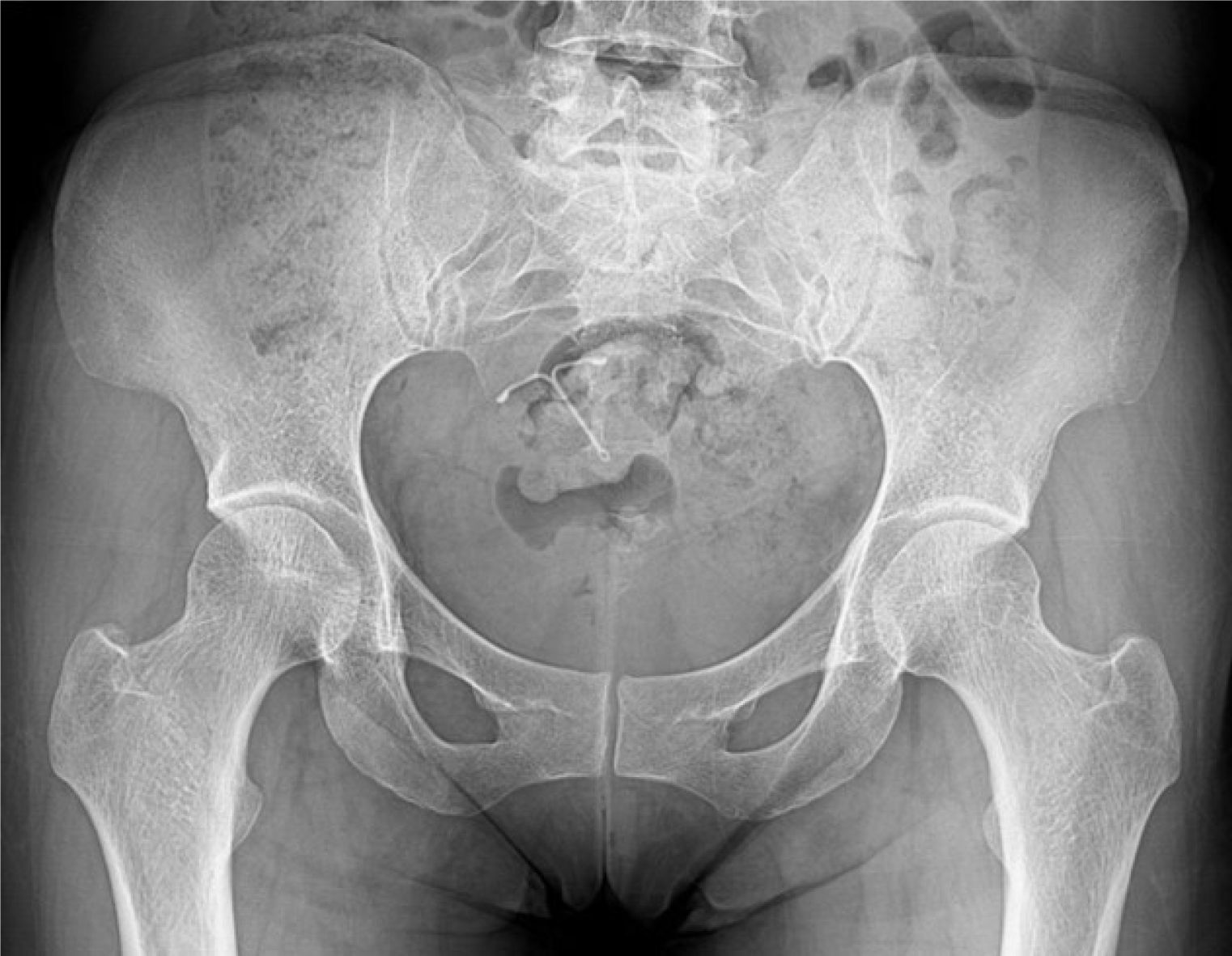 After 2 wk of follow-up, the pain slightly decreased. However, it did not disappear completely. It was determined that it was difficult to control symptoms only by conservation treatment. Thus, closed reduction and internal fixation using a cannulated screw were performed on the more painful left hip joint at 2 mo after the onset of pain (Figure 3). 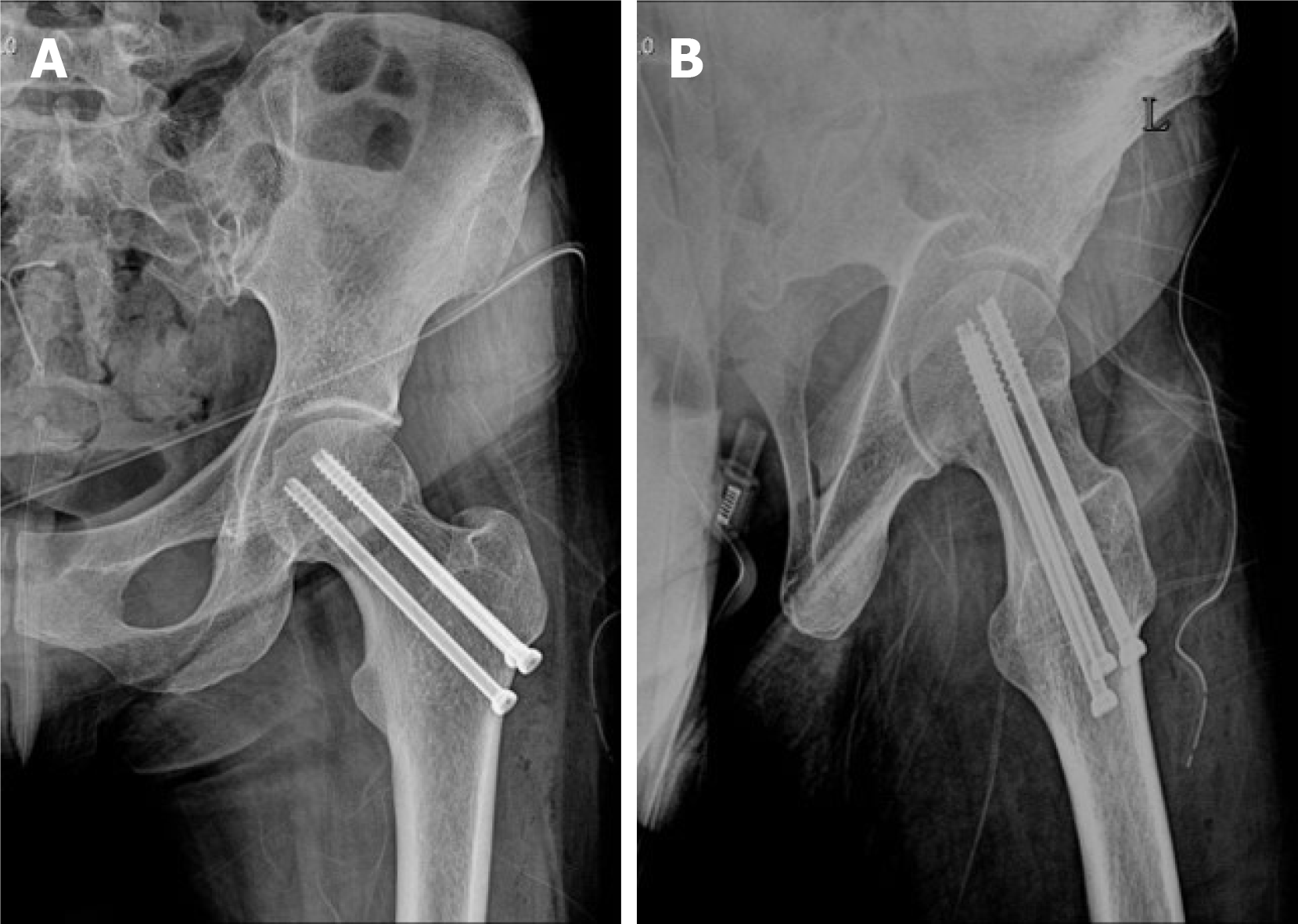 After operation, the pain was improved and walking using crutches was possible. Follow-up MRI showed that the right femoral head signal was decreased compared to the left femoral head signal (Figure 4). Nonsteroidal anti-inflammatory drugs and conservative treatment were provided to the patient. The patient was explained that a surgical treatment could be provided in case of worsening pain in the right hip joint in the future.

The main objective of this study was to report a stress fracture of the femoral neck after trampoline exercise in the general population (Figure 5). Particularly, a fracture that occurred in the left femoral neck with a herniation fit was a remarkable finding. 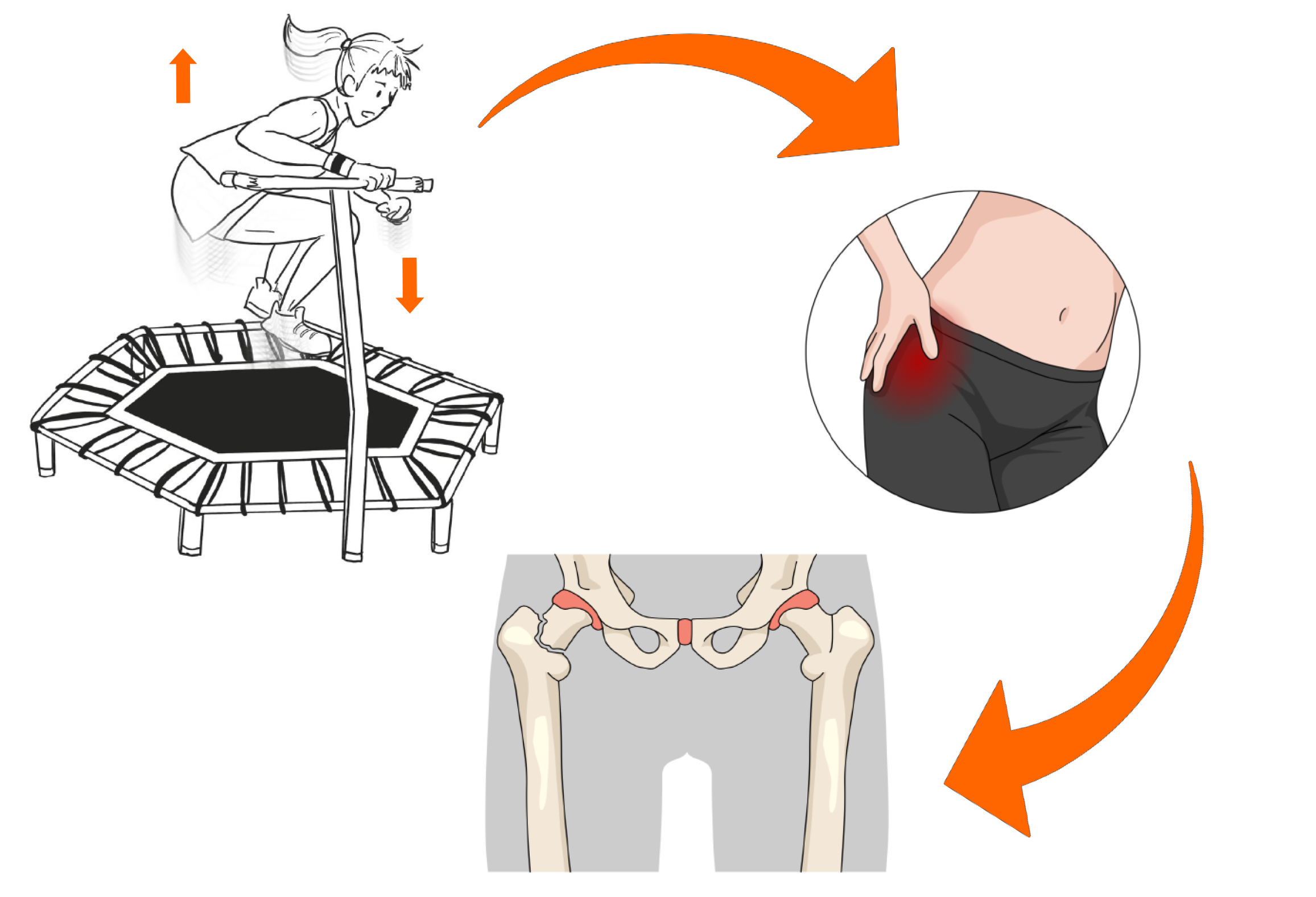 Figure 5 Schematic animation of stress fracture of the femoral neck after trampoline exercise.

About FNSFs that occurred during sports exercise, Robertson and Wood[10] presented the current concept in 2017. FNSFs account for 5% of all stress fractures and 3% of all sports-related stress fractures[10]. Their clinical symptom is pain increases when exercising but disappears when resting[5]. Risk factors for FNSFs include female gender and poor baseline physical fitness[11]. Disordered eating, amenorrhea, and decreased bone mineral density are also related to FNSFs[12,13]. The pathophysiology of FNSFs is repetitive mechanical load applied across the femoral neck and when absorption of bone exceeds metabolic repair during the remodeling process[11,13]. For diagnosis, a simple radiographic examination should be performed first. However, it has a low sensitivity for early detection[14]. MRI is the gold standard with 100% sensitivity[15]. If the diagnosis is delayed, displacement of the fracture and the incidence of avascular necrosis will increase. Thus, a rapid diagnosis is essential[16,17]. Treatment includes surgical and non-surgical treatment. Indications depend on the location, extent, and displacement of the fracture[13,14]. In this case report, the patient was a female with a poor baseline physical fitness. It has been confirmed that MRI is the best diagnostic tool for FNSFs. It was a disadvantage that the diagnosis was made at two months after the onset of symptoms. Fortunately, since there was no displacement of the fracture, good results were obtained after surgery. In this study, since the patient did a jumping exercise in place, it was difficult to accurately compare the FNSF caused by the running exercise with the exercise intensity. Assuming that the average step length when walking is 80.68 cm[18] and when running, the average stride length is 240 cm[19], the patient in this case is assumed to have a similar level of exercise to running about 1-4.5 miles per day. Comparing this result with other studies on FNSF after exercise in amateur athletes (6-7 miles per day)[20,21], it is difficult to say that there is a lot of exercise in this case. However, these results are difficult to compare objectively in this case, considering the characteristics of patients who do not have much exercise before doing trampoline exercise. In addition, in this study, the patient performed exercise for 6 wk, but other studies[20] did not specify the duration of exercise, so there is a limit in objective comparison of exercise intensity.

Doty et al[21] have studied 439 patients with trampoline-related injuries. These patients were divided into pediatric and adult groups. They also classified injured parts of the body and how many patients needed surgical treatment. However, there was no case of femoral neck stress fracture in adults like in this case report. In the pediatric group, femoral shaft fractures were reported. However, there were no cases of proximal femur fractures.

The present study reports the risk of trampoline used as a diet exercise in middle-aged people. Such case has not been reported before. It has clinical relevance. There is a risk of femoral neck stress fracture when a person with femoral acetabular impingement has repetitive hip flexion-extension over a short period of time. Therefore, exercise that excessively uses flexion of the hip joint for diet in the middle-aged population can cause stress fractures of the femoral neck. In patients with femoroacetabular impingement (FAI), excessive exercise of the hip joint should be prohibited and appropriate safety standards for trampoline elasticity should be established. In addition, it is important to determine a customized exercise schedule and exercise intensity in consideration of individual characteristics.

Trampoline exercise which uses hip joint repeatedly and excessively can lead to stress fractures of the femoral neck for middle-aged people. The risk of such fractures is greater if there is FAI in the hip joint.