Kaposi’s sarcoma (KS) is a malignancy that usually affects the skin of the lower extremities, and may involve internal organs. It originates from the vascular endothelium. It is well known that the development of KS is associated with human herpes virus 8 (i.e. HHV8) infections. Sporadic KS cases have mainly been found in Africa. Isolated splenic KS in Asia has rarely been reported. We present here a case of KS primarily involving the spleen in a human immunodeficiency virus (HIV)-negative Chinese patient.

A 50-year-old male patient was admitted to hospital due to abdominal distension and discomfort, reduced food intake and weight loss. Medical examination revealed that the patient had moderate anemia, a low platelet count, slight fatty liver and a huge mass in the spleen. Spleen lymphoma was considered. An anti-HIV test was negative. The whole spleen was surgically excised. The final pathological diagnosis was nodular stage spleen KS, and the patient underwent total splenectomy. He recovered well and was discharged from hospital 12 d after surgery. Two weeks later, the patient developed liver metastasis and died within 1 mo after surgery.

KS is difficult to diagnose and pathological examination is necessary. KS has a poor prognosis and should be diagnosed and treated early to improve survival.

Core Tip: This case describes a rare Splenic Kaposi’s sarcoma (KS) in a human immunodeficiency virus-negative patient. The preoperative diagnosis was lymphoma, but the postoperative pathological diagnosis was KS. The operation and lack of proper postoperative treatments for KS may promote liver metastasis and death, as in this case. Improving the overall understanding of KS is paramount. Therefore, we report this case to provide KS experiences and lessons for future clinical works.

Kaposi’s sarcoma (KS) is a rare angioproliferative disease of the vascular endothelium[1]. KS usually affects the skin of extremities but can also involve internal organs. The development of KS involves human herpes virus 8 (HHV8) infection, regardless of any association with acquired immunodeficiency syndrome (i.e. AIDS)[2]. KS has been classified into four types: classic KS, endemic African KS, iatrogenic KS, and epidemic KS[3]. Sporadic KS cases have mainly been reported in the Mediterranean/Eastern Europe, and isolated splenic KS is rare. Cutaneous KS lesions have three forms, based on histological appearance: patch lesions, plaque stage lesions, and nodular stage lesions. Clinical features of KS vary from asymptomatic to aggressive. Pain, edema, and ulceration may occur in cutaneous or mucous lesions[4]. Visceral KS may involve the liver, gastrointestinal tract, adrenal glands and the spleen[5-9], which can be life-threatening. In spleen KS, abdominal discomfort (distension or pain), and anemia were important clinical symptoms of a previously reported case and in our patient as well[9]. Differential diagnosis from other hematological diseases is required.

The patient began to have symptoms more than 10 d prior. He had previously visited a local clinic and received anti-inflammatory treatments to alleviate his symptoms. However, the symptoms relapsed after discontinuation of treatment. The patient was admitted to our hospital for further diagnosis and treatment. He underwent thorough laboratory examinations and was primarily diagnosed with thrombocytopenia, anemia, fatty liver and splenic space-occupying lesions. The patient was transferred from the hematology department into our ward for surgery.

The patient had a free previous medical history.

The patient had no relevant personal and family history.

On admission, the patient’s temperature was 36.5 °C, heart rate was 96 beats/min, respiratory rate was 19 breaths/min, blood pressure was 117/89 mmHg, and he had an anemic appearance. The patient had no rash or KS lesions on the skin. There were no lumps in the abdomen, the liver was not palpable, and the spleen could be touched at three transverse fingers under the ribs. There was no edema in the lower extremities.

A routine blood test showed moderate anemia with a hemoglobin level of 7.9 g/dL, thrombocytopenia with a platelet count of 35000/μL, and an albumin level of 30.5 g/L. Bone marrow biopsy showed active myeloproliferation (80%); a decrease in the ratio of granulocytes to erythrocytes was observed and immunohistochemical investigation showed CD 34(+), MPO(+), CD20(+), and CD3(T cell +). Tests for hepatitis B virus (hepatitis B surface antigen, hepatitis B surface antibody, hepatitis B e antigen, hepatitis B e antibody, hepatitis B core antibody) were negative. Tests for HIV antigen and antibody were negative. Detection of nucleic acid for COVID-19 (coronavirus disease 2019) was negative.

A computed tomography (CT) scan of the chest showed an inflammatory lesion in the right upper lobe of the lung and effusion in the left pleura. Abdominal CT suggested splenomegaly, with multiple low density shadows and mixed density shadows (Figure 1A). Abdominal magnetic resonance imaging (MRI) revealed space-occupying lesions in the spleen, which were considered to be lymphoma (Figure 1B).

Figure 1 Abdominal computed tomography scan and magnetic resonance imaging before surgery. A: The abdominal computed tomography performed on July 20, 2020 revealed splenomegaly, with multiple low density shadows and mixed density shadows; B: The magnetic resonance imaging on July 25, 2020 revealed multiple space-occupying lesions in the spleen, which was considered to be lymphoma.
Initial treatment

During hospitalization, the patient had moderate anemia and thrombocytopenia, and was initially treated with thymosin and caffeic acid tablets to stimulate the production of blood in the bone marrow. He also received omeprazole to protect the stomach and glutathione to protect the liver. The day before surgery, the patient was administered a platelet transfusion to increase his platelet count to 50000/μL.

The patient underwent an elective splenectomy. Macroscopic examination revealed that the spleen was 22 cm × 18 cm × 12 cm in size, part of the spleen surface membrane was missing, and the surface was dark red with many gray and white foci. Tumor tissues were harvested and subjected to histopathological examination (Figure 2), which revealed nodular stage splenic KS. Proliferative spindle cells were crisscrossed and divided by slit-like spaces containing blood cells, which were sieve-like or beehive in shape (Figure 3A and B). Immunohistochemical examination revealed that the tumor cells were immune-positive for CD31, CD34, FIL-1, ERG, Ki-67 (10%+), CD8 (individual cells+), and D2-40 (focal+), and were immune-negative for CK, EMA, HHV8 and EBER (Figure 3C-F). The patient was readmitted to our hospital and was diagnosed with multiple liver metastases of KS based on MRI findings (Figure 4). 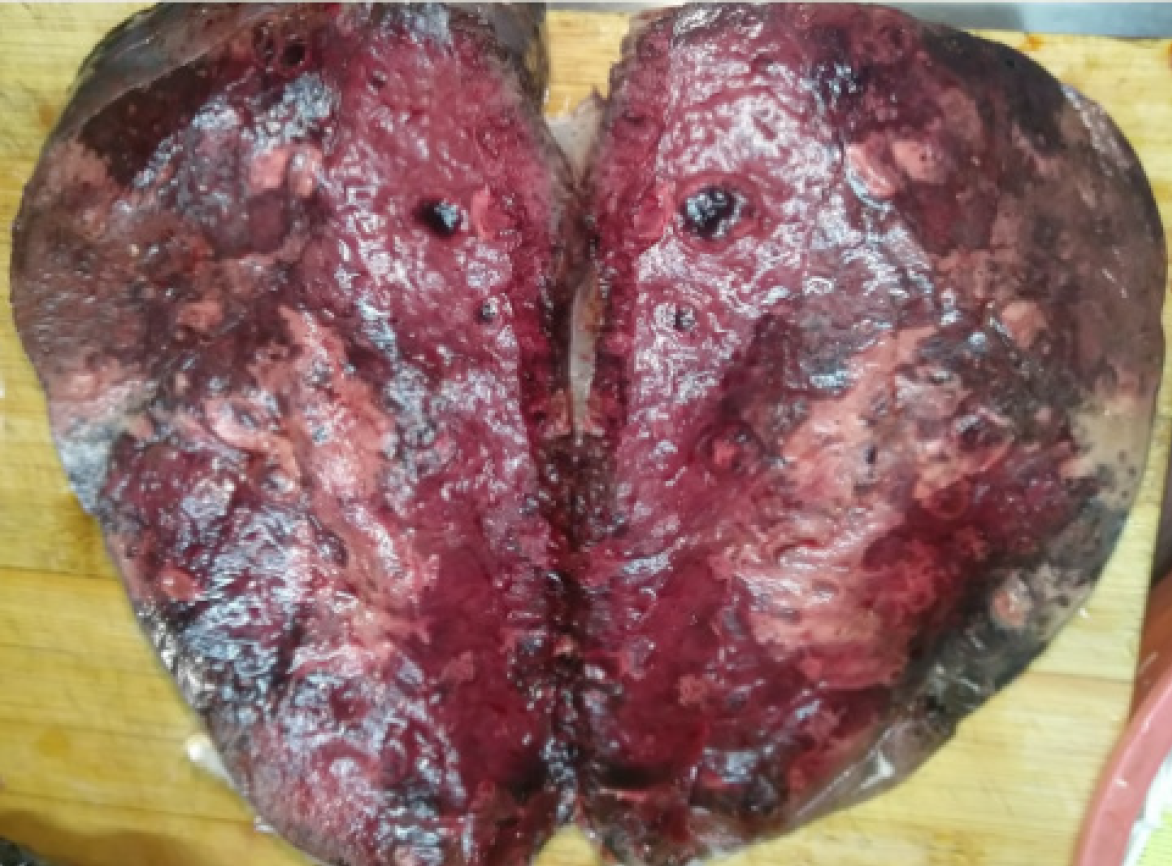 Figure 2 Abdominal magnetic resonance imaging images of the liver pre- and post-operation. A: The magnetic resonance imaging (MRI) performed before surgery on July 25, 2020 showed no Kaposi’s sarcoma (KS) lesions in the liver; B: The MRI on September 5, 2020, when the patient was readmitted to the hospital after surgery, showed multiple KS metastatic lesions in the liver (black spots). 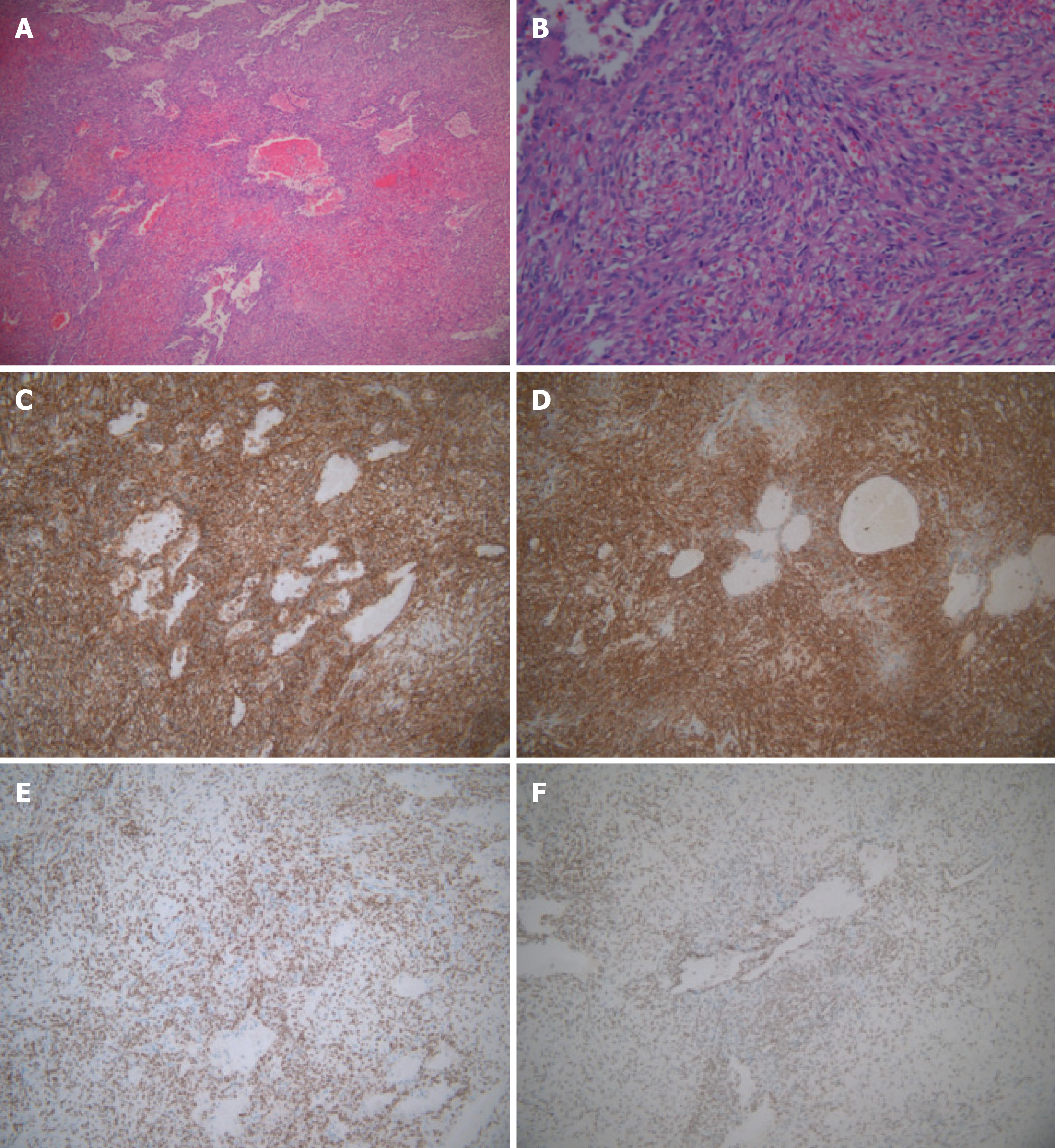 Based on the laboratory examinations and MRI findings, spleen lymphoma was suspected. When the patient’s condition was clinically stable, he underwent total splenectomy laparoscopically. During the operation, the liver was explored and no abnormal nodules were found. After surgery, the patient was given ceftriaxone for anti-infection and other medication to protect his liver and stomach. The patient recovered well and was discharged from hospital 12 d after surgery.

After surgery, the patient’s platelet count increased from 35000/μL to 114000/μL and then decreased 1 wk later. The patient’s anemia did not resolve. Two weeks after discharge, the patient was readmitted to the hospital due to severe jaundice. MRI showed that the patient had developed multiple liver metastases of KS, and laboratory examinations revealed impaired liver function. Unfortunately, the patient did not undergo further chemotherapy and died 1 wk later.

KS lesions are mainly localized on the skin of distal extremities but can also involve lymph nodes and visceral organs without skin involvement[3,10]. KS primarily located in the spleen in non-HIV patients has rarely been reported. Sarode et al[9] reported the first case of splenic KS in 1991. Mikami et al[11] reported a case of Kaposi-like variant of splenic angiosarcoma lacking HHV8 DNA in an HIV-negative patient in 2002. To our knowledge, we report the third case of KS located in the spleen in an HIV-negative patient. These cases have similar clinical features and malignant behavior. KS lesions have three stages: patch stage, plaque stage and nodular stage[4]. Based on low-magnification findings, our patient had nodular stage KS.

The pathogenesis of KS has still not been clearly elucidated. It is uniformly associated with HHV8 infection, irrespective of HIV infection history[12]. Szajerka et al[3] reviewed the multifactorial etiopathogenesis of KS, including the HIV, iron and other minerals, insects and saliva, and HHV8 infection. Ensoli et al[13] indicated that KS is the result of the complex interplay between HHV8 and immunologic, genetic and environmental factors. In our case, unfortunately, tumor cells were immuno-negative for HHV8 and we were unable to test for HHV8 DNA in the blood sample. However, this does not indicate that the present case did not have HHV8 infection. In addition to HHV8, cyclin D1 is also an important molecular marker to distinguish KS from angiosarcoma[14].

The clinical manifestations of splenic KS vary, and mainly include anemia, abdominal discomfort (abdominal pain or distension), and metastasis. In two reported cases, the patients had abdominal pain, and the chief complaint in our case was abdominal distension. The first reported case developed metastasis in the liver, mesentery, pleura, and lymph nodes[9]. The second case developed liver and bone marrow metastases[11]. Four weeks after surgery, the present patient was found to have liver metastasis when he was readmitted to the hospital due to jaundice. We speculate that surgery promoted tumor metastasis. It is possible that if the patient receives chemotherapy after surgery, tumor metastasis may be delayed.

Selection of the management strategy for KS depends on the location and variant of KS[15]. Epidemic KS often regresses with highly active antiretroviral therapy[16,17] and potent antiretroviral medication can dramatically reduce the incidence of KS in HIV patients[18]. For visceral KS, surgery, radiotherapy and systemic chemotherapy are necessary. The patients with splenic KS underwent splenectomy and chemotherapy according to the reports[9,11]. In our case, the whole spleen was successfully excised, but failed to improve the patient’s condition and accelerated liver metastasis. Although biopsy can provide correct diagnosis, considering that splenic biopsy may increase the risk of tumor metastasis, we did not perform biopsy before surgery. The prognosis of splenic KS is very poor. Patients with widespread visceral involvement are poorly responsive to treatment[4]. The present patient only lived 3 mo from the time he felt sick. Up to date, we have insufficient knowledge about KS. A splenic tumor does not explain megaloblastic anemia; therefore, the diagnosis of KS should be established until the etiology is explained. Our patient should have received early appropriate treatment for splenic KS consisting of surgery, chemotherapy and radiotherapy.

We report a rare splenic KS in an HIV-negative patient with atypical clinical manifestations. MRI suggested splenic lymphoma and splenectomy was performed. The pathologic diagnosis was KS.

We are grateful to the patient and his family for providing a signed informed consent. We acknowledge the contribution by our study team members. We would like to thank Professor Gengyin Zhou from the Department of Pathology of Qilu Hospital and Qianfeshan Hospital for assistance in the pathological diagnosis.