Case 1: An 89-year-old female. She underwent abdominal contrast-enhanced computed tomography (CECT) due to abdominal pain and diarrhea. Her gallbladder wall indicated the absence of contrast enhancement, thus leading to diagnosis of gangrenous cholecystitis and she therefore underwent LC. Although her gallbladder demonstrated diffuse necrosis and it was also partly perforated, she was able to be discharged without any serious complications. Case 2: A 91-year-old female. She made an emergency visit with a chief complaint of abdominal pain. Abdominal CECT revealed swelling of the gallbladder and an ambiguous continuity of the gallbladder wall. She was diagnosed with gangrenous cholecystitis and underwent LC. Her gallbladder had swelling and diffuse necrosis. Although her preoperative blood culture was positive, she showed a good outcome following surgery.

Although a definite diagnosis of gangrenous cholecystitis is difficult to make prior to surgery, if an early diagnosis can be made and appropriate treatment can be carried out, then even very elderly individuals may be discharged without major complications.

Gangrenous cholecystitis is defined as cholecystitis involving necrosis and the bleeding of tissues after edematous alterations. The necrosis of tissues is said to be caused by adiemorrhysis of the arterial branches resulting from the oppression of the gallbladder wall due to an elevated biliary internal pressure. Early and appropriate treatment is desirable; however, making a preoperative diagnosis is often difficult. We herein report on two cases of very elderly people diagnosed early with gangrenous cholecystitis, who safely underwent LC and thereafter showed a good outcome.

Case 1: The subject was an 89-year-old female with a chief complaint of abdominal pain and diarrhea.

Case 2: The subject was a 91-year-old female with a chief complaint of right abdominal pain.

Case 1: While hospitalized for a left trochanteric fracture, she suddenly complained of abdominal pain and diarrhea.

Case 2: She visited a local doctor with a chief complaint of right abdominal pain. An abdominal ultrasound revealed swelling of the gallbladder at a local clinic and therefore she was referred to our hospital.

Case 1: She had a past history of Alzheimer's dementia and trochanteric fracture.

Case 2: She had a past history of hypertension, angina, and hyperlipidemia.

Their family histories have nothing notable in both Case 1 and Case 2.

Case 1: Although there were no problems with her vital signs and her abdominal region was flat and soft, she experienced localized pressure pain in her right hypochondrium. She had no obvious rebound tenderness. The Case 2 was the same as the Case 1.

Case 1: An abdominal contrast-enhanced computed tomography (CECT) revealed significant swelling of her gallbladder and asymmetrical wall thickening (Figure 1). The gallbladder wall indicated parts with either poor or no contrast enhancement, with a partial failure of continuity of the mucosa.

Figure 1 An abdominal contrast-enhanced computed tomography (Case 1). A: Small calculus in the gallbladder neck (arrow); B: Significant swelling of the gallbladder and asymmetrical wall thickening. The gallbladder wall indicated parts with either poor or no contrast enhancement (arrow), with a partial failure of continuity of the mucosa.

Case 2: An abdominal CECT (Figure 2) revealed significant swelling of her gallbladder and ascites around her liver. There was asymmetrical gallbladder wall thickening and the continuity of part of the wall was ambiguous.

Figure 2 An abdominal contrast-enhanced computed tomography (Case 2). A: Significant swelling of the gallbladder. Ascites around the liver; B: There was asymmetrical gallbladder wall thickening and the continuity of part of the wall was ambiguous (arrow).
FINAL DIAGNOSIS

From the above, they were diagnosed with gangrenous cholecystitis and therefore underwent emergency surgery in both Case 1 and Case 2.

Case 1: The surgery was carried out under laparoscopy using four ports. Inside the abdominal lumen, the omentum was attached around the gallbladder and a part of gallbladder wall was found to demonstrate necrosis. Fragile parts of the gallbladder wall had partially ruptured, thus causing bile to leak (Figure 3A and B). First, we took an approach from the gallbladder neck to identify the critical view of safety (CVS). Since inflammation was substantial and the overall gallbladder was thickened with a finding of necrosis, we believed that this approach was difficult. Therefore, we switched to subtotal cholecystectomy using the fundus first technique. Upon exfoliation from the base to the neck, we cut off the parts without necrosis using an autosuture to extract the specimen (Figure 3C-E). 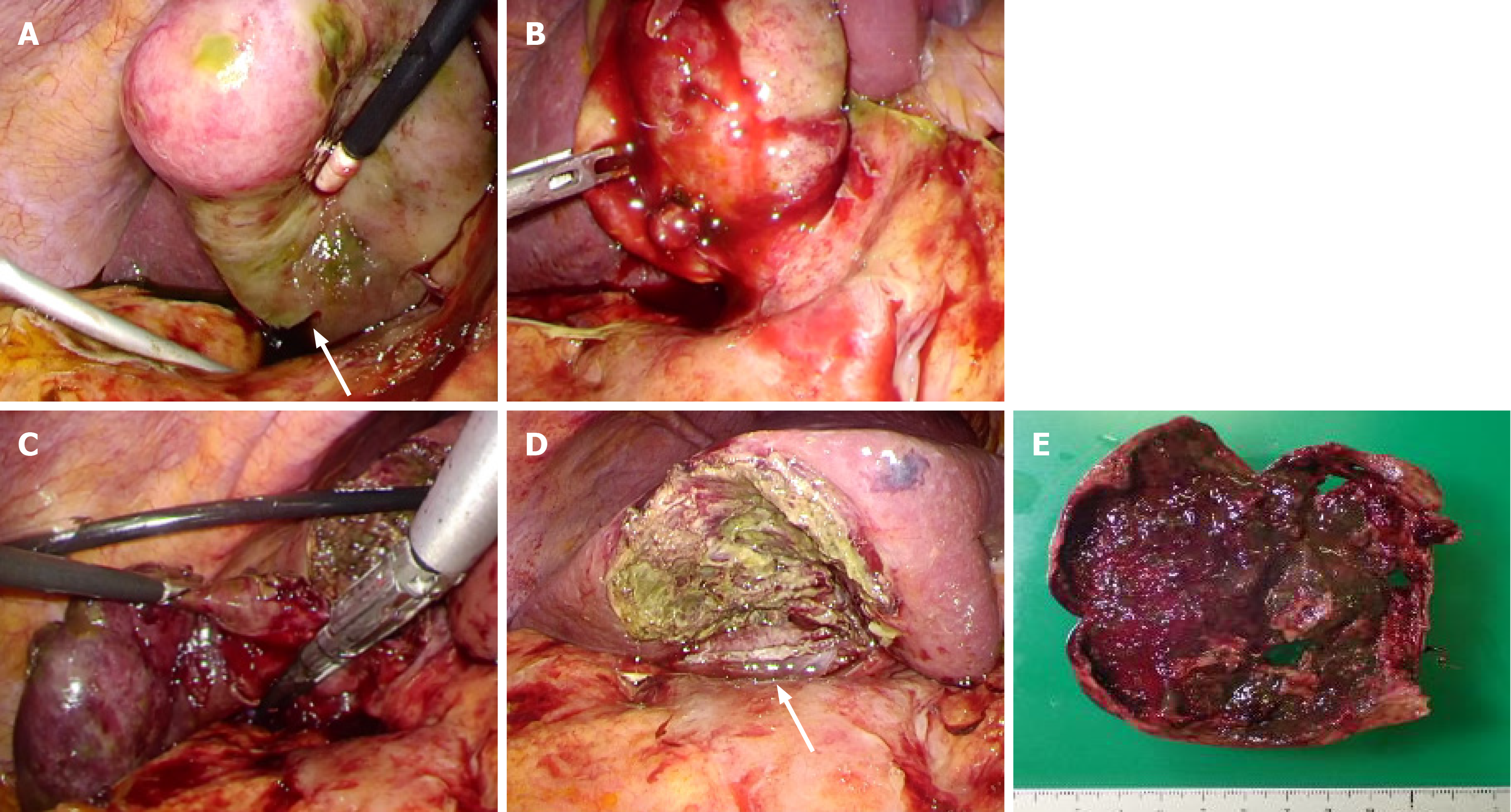 Case 2: The laparoscopic surgery was performed as in Case 1. Inside the abdominal lumen, the gallbladder was very tense with diffuse necrosis, while the gallbladder wall was maintained without leaking bile (Figure 4A). We took an approach from the gallbladder neck, identified CVS and treated the biliary artery (Figure 4B). We then attempted to treat the cystic duct. Since bleeding was substantial and it was difficult to develop the view field, and the duct had thickened substantially due to inflammation, in the end, we chose to use the fundus first technique. Upon exfoliation from the base to the neck, we identified the cystic duct again, however, we deemed that it was difficult to treat it using an autosuture due to the substantial thickness of the duct. We performed double ligature/treatment using a looped absorbable monofilament suture, carried out subtotal cholecystectomy, and extracted the specimen (Figure 4C-E). 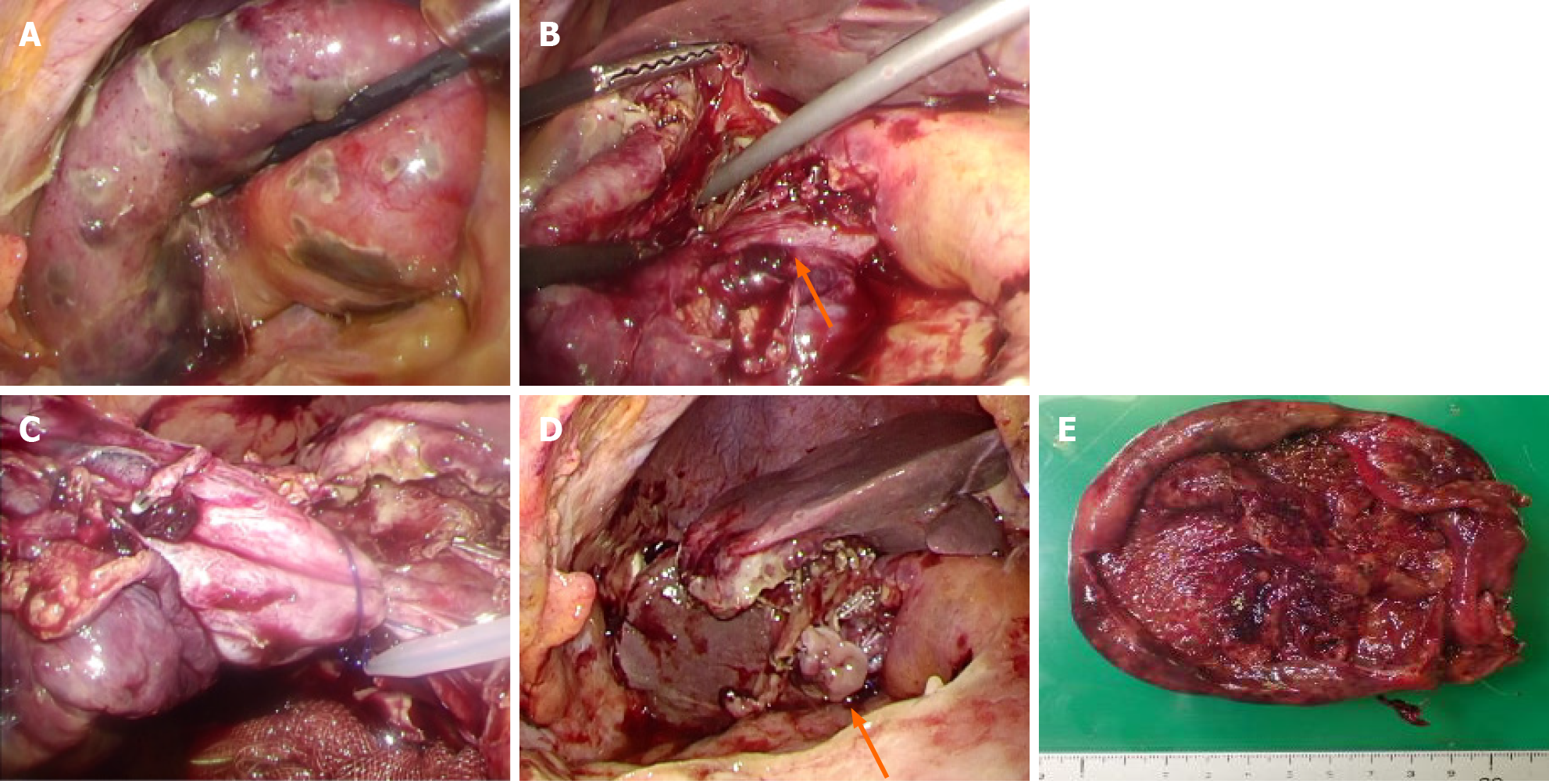 Case 1: The patient made good progress following surgery without any major complications and she was discharged home on the 10th disease day. A histopathological examination revealed gangrenous alterations indicating necrosis of all layers and involving neutrophilic infiltration, bleeding, and the genesis of granulation tissue on the serosal side.

Case 2: She made good progress following surgery and was discharged home on the 10th disease day. A histopathological examination indicated necrosis of all layers with a background of edema and acute inflammatory cellular infiltration.

In TG18, the treatment strategy is determined based on the treatment flow chart according to the severity classification as well as the underlying diseases and normal condition of the patient[5]. In other words, the Charlson comorbidity index (CCI) and American Society of Anesthesiologists physical status (ASA-PS) and other predictors are taken into consideration when determining the indications for surgery. Based on these guidelines, biliary drainage may be performed other than surgery for patients with high risk from surgery. We believe the guidelines allowed us to make a more suitable determination that in actual clinical practice. Both cases in this study had Grade II cholecystitis based on the severity criteria and had CCI one point and ASA-PS two points. Therefore, we chose surgery.

The first choice of surgery for acute cholecystitis is LC except if cancer is suspected[6]. It has been reported in randomized controlled trial and meta-analysis that LC has an equivalent treatment outcome with open cholecystectomy along with a "shorter postoperative admission duration,” "lower incidence of complications," and "superiority in mortality and mobidity"[7-12]. On the other hand, it is said to cause more biliary tract damage due to anatomical misidentification compared to laparotomy, which is a problem associated with its introduction[13]. It is said to be essential to identify CVS to avoid biliary tract damage and safely conduct laparoscopic surgery[3,14]. Moreover, it is believed to be important to operate at the anterior Rouvier groove because the right hepatic artery and bile duct right branch are at the posterior Rouvier groove, to perform exfoliation and vessel treatment as close to the gallbladder as possible, and to perform exfoliation while being aware of the subserosa-inner layer, which is said to cause bleeding and damage less frequently[15]. However, for cholecystitis with severe local inflammation such as gangrenous cholecystitis, it is often difficult to perform LC perfectly according to the above procedure. In the above case, it is recommended to consider using laparosonic coagulating shears, adding ports, the fundus first technique[16], subtotal cholecystectomy[17] and open conversion. If these also present with challenges, then we perform fundus first technique. If dissection is difficult, we treat such cases at the gallbladder neck and carry out subtotal cholecystectomy. We perform laparotomy if these approaches still cannot accomplish the surgery. In our cases, we could accomplish the surgery in accordance with the above methods. Acute cholecystitis is a disease we often encounter. The treatment strategy varies according to the severity. In particular, there are various approaches to the surgery. As a result, proficient techniques and appropriate determinations are required.

Recently, there has been an increasing number of cases of very elderly people who require surgery as in our cases. It has been reported that because very elderly people sometimes have a chief complaint which is difficult to understand or different from ordinary complaints, consultation or examination tend to be late and the diseases tend to become severe[18]. Since it is difficult to find out the past history and physical findings, blood examinations and imaging examinations are therefore recommended. In our cases, we were able to avoid vital complications by early examinations, a timely diagnosis, and treatment after identifying the symptoms. For surgery involving very elderly people, we believe appropriate and early diagnosis and treatment are necessary to avoid procedural accidents during surgery and postoperative complications.