Research Domain of This Article
Cardiac and Cardiovascular Systems

Endocardial fibroelastosis (EFE) is a rare heart disease characterized by thickening of the endocardium caused by massive proliferation of collagenous and elastic tissue, usually leading to impaired cardiac function. Multimodality cardiovascular imaging for the evaluation of EFE with thrombi is even rarer.

We report a rare case of EFE associated with multiple cardiovascular thrombi. Three-dimensional (3D) and contrast echocardiography (CE) were used to assess ventricular thrombi. Anticoagulant therapy was administered to eliminate the thrombi. The peripheral contrast-enhanced thrombi with the highest risk were dissolved with anticoagulant therapy at the time of reexamination, which was consistent with the presumption of fresh loose thrombi.

Endocardial fibroelastosis (EFE) is a rare heart disease that frequently occurs in infants and children. It is characterized by diffuse thickening of the endocardium due to the proliferation of collagen and elastic fibers, presenting as unexplained heart failure. Patients with EFE are prone to endocardial thrombosis, which may be due to enlarged cardiac cavity, systolic dysfunction, and altered endothelium lining[1,2]. Previous studies have also reported that a thrombus can easily form in sites of akinetic, dyskinetic, or aneurysmal segments that were potentially at risk for thrombo-embolism[3]. If the embolus is detached from the mural thrombus, complications arise and other organ changes occur. Herein, we report a case of EFE with multiple thrombi of the left ventricle, abdominal aorta, renal artery, and common iliac artery diagnosed by multimodality cardiovascular imaging. The incremental role of three-dimensional (3D) and contrast echocardiography (CE) in the clinical diagnosis of thrombi is also explained.

An 11-year-old girl was admitted to Shengjing Hospital with nausea and vomiting for 4 d.

The patient developed nausea and vomiting 4 d ago and has vomited 1-2 times a day. Vomiting included the stomach content and was non-ejective. In order to achieve standardized treatment, the patient was admitted to the department of Pediatrics at Shengjing Hospital of China Medical University on June 1, 2020 with "endocardial elastic fiber hyperplasia and vomiting pending investigation".

Her medical history was significant for EFE diagnosed 10 years ago. She has been undergoing regular examinations and treatments for a decade, and her condition was relatively stable.

Physical examination showed that the liver margin was palpable 4 cm below the costal margin and 6 cm below the xiphoid process. Bilateral dorsal foot pulse was not detected.

3D echocardiography showed that a thrombus with a wide base and low mobility protruded from the side wall of the left ventricle (Figure 2A). A mobile thrombus component with a thin pedicle was protruding from the left ventricular apex (Figure 2B).

The CE results showed that the mass on the left ventricular lateral wall near the apex was relatively fixed and had slight activity and deformation, but there was contrast agent entering at a part of the junction between the base of the mass and the left ventricular wall. The other part of the base was tightly connected to the left ventricular wall. Its inner portion showed no contrast enhancement (Figure 3A). The masses in the left ventricular apex had great mobility and deformation. Contrast agent was detected in the peripheral part of these masses, while most of their center portions were not contrast-enhanced (Figure 3B). This mass was determined to be of the highest risk according to CE results. These masses were considered to be thrombi due to their echocardiographic morphological characteristics and the patient's primary disease.

Figure 3 Thrombi imaging using contrast echocardiography. A: There was contrast agent entering at a part of the junction between the base of the thrombus and the left ventricular wall. The inner portion of the thrombus showed no contrast enhancement; B: Contrast enhancement was detected in the peripheral part of the two thrombi in the left ventricular apex, while most of the center portions were not contrast-enhanced.

The 3D computed tomography angiography demonstrated thromboembolism from the abdominal aorta (level of the right accessory renal artery) to the bilateral common iliac artery (Figure 4). Thrombosis was also detected in the proximal left renal artery and the opening of the right renal artery, with multiple ischemic foci in both kidneys. 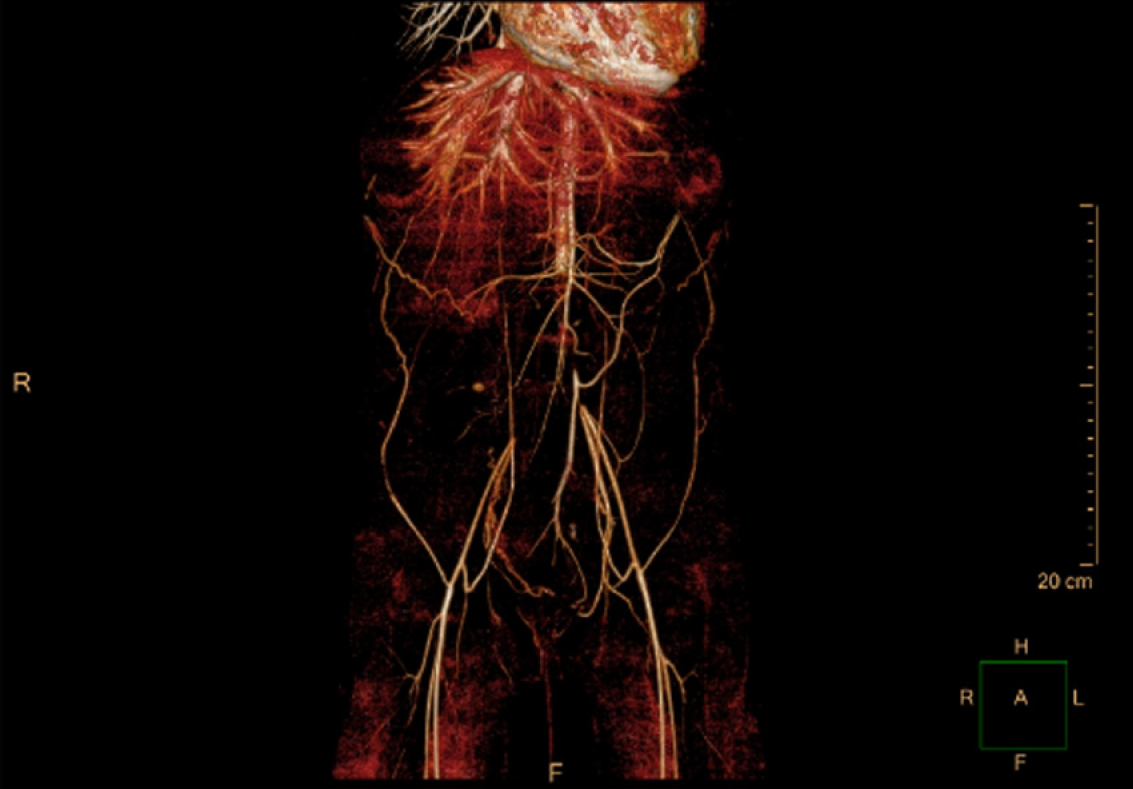 Anticoagulation and other symptomatic treatments were administered to eliminate the thrombus and relieve the patient's other symptoms.

EFE is a rare heart disease characterized by thickening of the endocardium, cardiac enlargement, and myocardial dysfunction. The exact etiology of EFE is unknown and may be related to many factors, including infection[4], congenital developmental malformation[5], autoimmune diseases[6], chromosomal abnormalities and gene mutations[7], and myocardial ischemia and hypoxia[8].

Using the combination of 3D echocardiography and CE, the mass can be displayed more accurately and vividly. We further performed CE to detect the nature, density, and connection to the left ventricular wall of the mass in order to make an accurate clinical diagnosis. CE is widely used in cardiovascular diseases. It can be used to evaluate left ventricular structure and function to improve image quality, reader confidence, and reproducibility[10]. Compared to computed tomography (CT), MRI, positron emission tomography (PET), and PET-CT, CE is a fast, effective, well-tolerated, and inexpensive technology[11]. The image of the thrombus needs to be distinguished from the tumors. Previous literature has reported that CE has a high diagnostic accuracy in differentiating thrombi from benign or malignant tumors[12]. A mass with no contrast enhancement was confirmed as a thrombus. Incomplete or complete enhancement of a mass might be considered a benign or malignant tumor[12,13]. The present study found that CE plays a great role in delineating the outline of the thrombus, clarifying its loose and dense parts, and determining the tightness of the connection between the base and the left ventricular wall. CE does not only help to confirm the diagnosis of the thrombus, but also determines its risk. Contrast enhancement was observed in the peripheral part of the two active thrombi. There was no contrast enhancement in their central portion. The results suggested that the peripheral structure of the mass might be loose, like a gap structure, while the central part was dense. These thrombi were considered to have a very high risk of emboli shedding based on their activity and deformation. The newly formed thrombus was usually highly mobile and protruded into the ventricular cavity, while the old thrombus often had a smooth surface and was usually relatively static. This case had both fresh active and old thrombi, which might have been the source of multiple celiac artery thromboses. At the time of reexamination, the peripheral contrast-enhanced thrombi were first dissolved with anticoagulant therapy, which was consistent with the presumption of fresh loose thrombi.

Left ventricular thrombosis has been identified as a marker of adverse cardiovascular events. Embolism from the heart or aorta can cause transient ischemic attack, stroke or peripheral arterial occlusion, which often leads to clinically significant morbidity and mortality[14]. In the present case, multiple thrombi were also found in the abdominal aorta, renal artery, and common iliac artery. Despite adequate medical measures, the patient eventually died of cardiogenic shock, respiratory failure, sepsis, and severe pneumonia. Due to the rarity of EFE and limited specific evidence, it is recommended that prevention of thromboembolism risk and thrombosis treatment follow general guidelines. It is necessary to be vigilant regarding the occurrence of thromboembolic events in EFE patients.