Growing teratoma syndrome (GTS) is an unusual presentation of an amazing transformation of teratoma from malignant to benign on pathology during or after systemic or intraperitoneal chemotherapy. The definitive pathogenesis is still not fully understood due to the lack of large-sample studies.

A 53-year-old woman underwent radical surgery and postoperative intraperitoneal chemotherapy due to immature teratoma of the right ovary at the age of 28. She remained well during a 25-year follow-up period after surgery. Multiple asymptomatic solid masses were found in the liver on ultrasonography a month ago. Enhanced computed tomography (CT) of the abdomen revealed multiple masses in the abdominal cavity. The largest one was located in the posterior peritoneum next to the sixth segment of the right liver, about 7.9 cm × 7.5 cm in size. Three masses were present inside the liver, and one mass was in the right pelvic floor. Multiple lumps in the abdominal cavity were completely removed by surgery. During the operation, multiple space-occupying lesions were seen, ranging in size from 0.5 to 3 cm, and grayish white in color and hard in texture. Ovarian GTS was finally diagnosed based on postoperative pathology. After surgery, she recovered uneventfully. During a 3-year follow-up, the patient remained free of the disease without any recurrence on CT scan.

GTS is a rare phenomenon characterized by conversion of immature teratoma to mature one during or after chemotherapy and presents as growing and metastasizing masses. The pathogenesis of GTS is unclear, and the prognosis is good after surgical resection.

Core Tip: Growing teratoma syndrome (GTS) is a rare complication characterized by normal tumor markers during or after chemotherapy, but the size or number of tumor increases or both increases. At present, the mechanism has not yet been explained. In this regard, we propose a new hypothesis of tumor competitive inhibition and dormancy. It is recommended that clinicians should know the characteristics of the course of the disease, closely follow up the patients, diagnose and treat the disease timely, and avoid unnecessary chemotherapy. Surgical resection is the key to ensure a good prognosis of ovarian GTS.

Growing tumor syndrome (GTS) is a rare entity that refers to an amazing phenomenon characterized by complete conversion of the primary malignant tissues to benign components on pathology during or after systemic or intraperitoneal chemotherapy, leaving the benign acquiring a regrowing performance and tolerance to radiotherapy or chemotherapy[1]. It was first reported in 1982[2]. However, its definitive pathogenesis is still not fully understood due to lack of large sample studies. In addition, GTS in the liver is often misdiagnosed as multiple primary or metastatic masses[3]. Herein, we describe a middle-aged woman who was finally diagnosed with an ovarian growing teratoma syndrome (OGTS) that mimicked multiple metastatic hepatic masses at first, aiming to investigate its diagnosis, treatment, and possible pathogenesis.

A 53-year-old woman underwent radical surgery and postoperative intraperitoneal chemotherapy due to immature teratoma of the right ovary at the age of 28. She remained well during a 25-year follow-up period after surgery. Multiple asymptomatic solid masses were found in the liver on ultrasonography a month ago and she was then hospitalized in the Hangzhou First People's Hospital.

The patient was accidentally found to have multiple asymptomatic solid masses in the liver during an ultrasound examination at a local community clinic a month ago, and a palpable mass in the abdomen, but no tenderness. She visited our hospital for relevant examinations and further treatment. The patient underwent pathological examination of liver tumor guided by B-ultrasound before operation, which suggested mature teratoma. Finally, the patient decided to undergo surgery.

The patient underwent bilateral appendage + total hysterectomy + omentectomy + appendectomy + lymph node dissection 25 years ago due to immature solid teratoma of the right ovary. Postoperative pathological diagnosis was immature solid teratoma of the right ovary, involving the omentum and appendix, with lymph node metastasis (4/21). From the 3rd day after surgery, she received intraperitoneal chemotherapy of cisplatin 6 times. The patient had no history of hepatitis and gastrointestinal malignancies.

The patient did not smoke or drink, and had no relevant family history.

A non-tender hard mass on the right upper abdomen with clear boundary and smooth surface, about 7 cm × 6 cm in size, was noted. In the middle and lower abdomen, incision scar was observed.

Abdominal computed tomography (CT) showed multiple masses in the abdominal cavity. The largest one was located in the posterior peritoneum next to the sixth segment of the right liver, about 7.9 cm × 7.5 cm in size, with uneven internal density, calcification and adipose tissue. Three masses were present inside the liver, the largest was about 3 cm × 2 cm, and one mass was in the right pelvic floor, which was about 2 cm × 2 cm (Figure 1).

Based on the patient’s medical history and related examinations, the patient was diagnosed with OGTS (Figure 2). 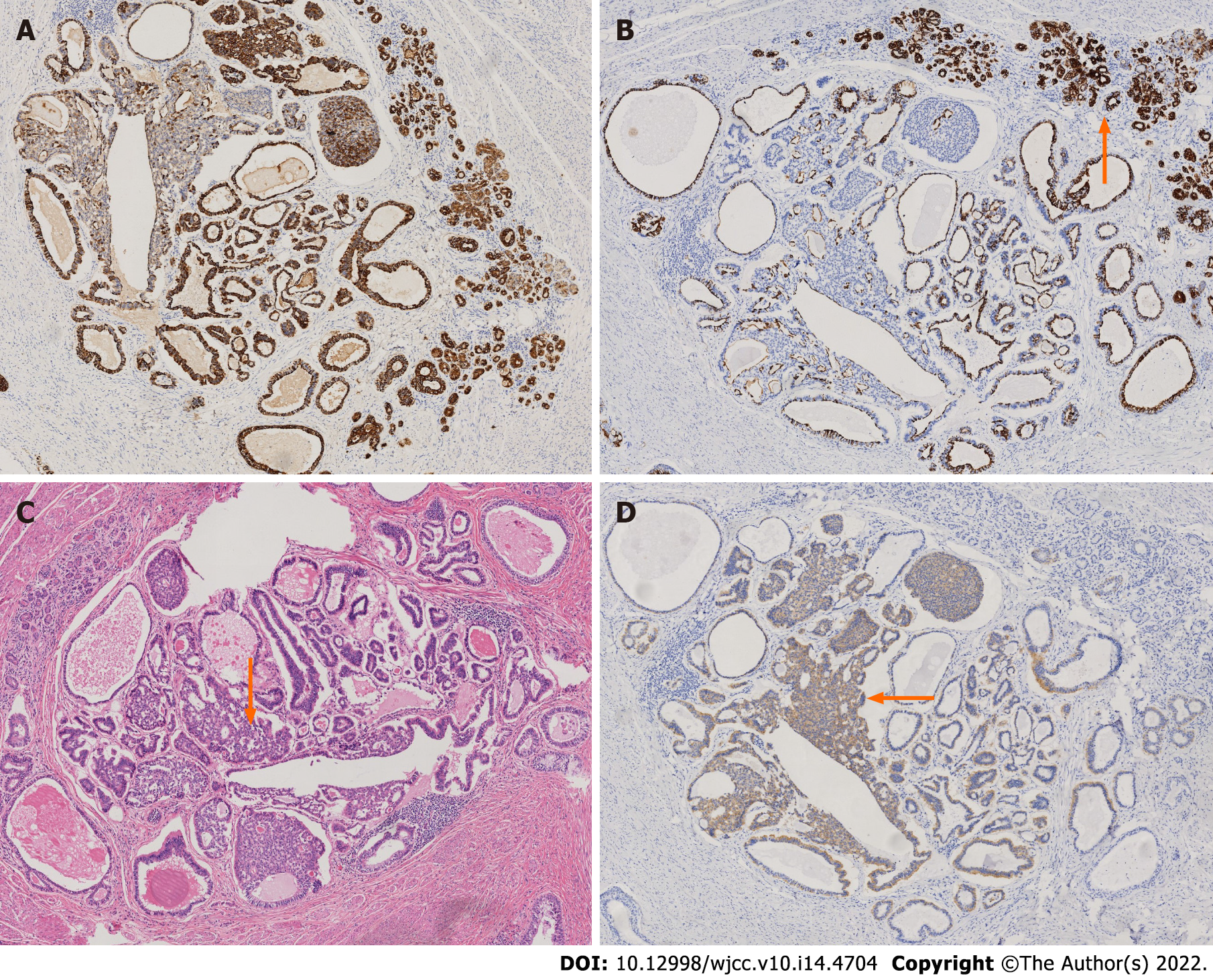 The patient recovered uneventfully after surgery and was discharged after 8 d, and has returned to the hospital for review every 3 mo. On a 3-year follow-up, the patient remained free of the tumor without recurrence on CT scan.

OGTS refers to selective extinction of ovary-origin immature teratoma acquiring tolerance to radiochemotherapy[1]. It often occurs in young women, the youngest patient is 4 years old[4]. And 2%-7% of GTS occur in non-spermatogonia reproductive tumors, the main modes of metastasis are transperitoneal dissemination, lymph node metastasis and hematological dissemination, and the most common metastatic site is retroperitoneum, but also in the liver, kidney and mediastinum, with a median growth rate of 0.5 cm/mo[5]. So far, there are no standardized criteria for GTS diagnosis and treatment[6]. The mainstream of hypothesis concerning its pathogenesis hold that extinction of immature teratomatous cells or benign lesion transformation might be a genetic mutation triggered by sensitive chemotherapy, leaving mature teratomatous cells regrowing behind[7]. However, the hypothesis seemed to be difficult to explain the OGTS presenting as multiple foci with different growing pace just like this case. For this reason, we proposed a new hypothesis of tumoral competitive inhibition and dormancy. We supposed that immature and mature teratomatous cells most likely co-existed in the primary malignant ovarian teratoma and its metastatic foci, but the benign growth arrested due to the malignant aggressive behavior. When encountering sensitive chemotherapeutic drugs such as cisplatin, immature teratomatous cells were selectively killed, while mature teratomatous cells were completely inhibited to an occult status that refers to dormancy stage until they might be awakened at an uncertain time. The key to successful diagnosis includes four tips: (1) Serum tumor markers are normal or tending to be normal; (2) During or after systemic chemotherapy or thoracic or abdominal chemotherapy, the recurring tumor has growth characteristics and is resistant to radiotherapy or chemotherapy; (3) The postoperative pathology of the tumor specimen suggests a benign tumor (mature teratoma); and (4) Preoperative pathological examination or imaging examination of the mass has no evidence of malignancy, but shows teratoma characteristics. In this case, the elevated serum CA 19-9 was thought to be most likely associated with these metastatic masses involving the liver and pelvic peritoneum because the abnormal CA 19-9 was back to normal after removal of these metastatic foci. Complications of OGTS include focal carcinoma transformation, spontaneous rupture, and symptoms of compressing adjacent viscus[8,9]. Additionally, the incomplete resection might lead to a higher recurrence rate (72%-83%) compared to complete resection (< 4%)[10]. Therefore, thorough surgical removal of all newly emerged masses should be the only curative management.

OGTS presenting as multiple hepatic masses might be misdiagnosed as metastatic or primary liver lesions, or result in disastrous consequence due to invalid radio-chemotherapy. Therefore, early recognition of this disease and complete removal of all the masses are crucial in the treatment of this disease, and long-term follow-up should be carried out after the operation. Hypothesis of tumoral competitive inhibition and dormancy could better explain its occurrence.