Chronic myeloid leukemia (CML) is a clonal hematopoietic stem cell disorder. Plasma cell dyscrasias are a rare heterogeneous group of hematological disorders. The co-occurrence of CML and plasma cell dyscrasias in the same patient is an extremely rare incident and has been reported in several cases in the literature.

In the present report, we described a rare case of the co-occurrence of CML and plasma cell dyscrasias in a 48-year-old man, and we discussed the reason why monoclonal gammopathy of undetermined significance progressed to smoldering multiple myeloma and eventually to multiple myeloma while being treated with dasatinib for CML. The tyrosine kinase inhibitor treatment and cytogenetic change may contribute to this phenomenon, and clonal hematopoiesis of indeterminate potential may lead to both CML and multiple myeloma cells in a patient. Future studies are warranted to further explain the hidden reasons.

Core Tip: Here we describe a patient with chronic myeloid leukemia complicated with plasma cell dyscrasias receiving dasatinib. He developed monoclonal gammopathy of undetermined significance that progressed to smoldering multiple myeloma and eventually to multiple myeloma. This case highlights that gene translocation may contribute to initiating and sustaining clonal proliferation. Tyrosine kinase inhibitors and cytogenetic change may lead to the progression.

Chronic myeloid leukemia (CML) is a clonal hematopoietic stem cell disorder, which is defined by the presence of Philadelphia chromosome in a patient with a myeloproliferative neoplasm. Plasma cell dyscrasias (PCD) are a rare heterogeneous group of hematological disorders, which include monoclonal gammopathy of undetermined significance (MGUS), multiple myeloma (MM), systemic amyloid light chain amyloidosis, and polyneuropathy, organomegaly, endocrinopathy, M-protein, skin changes syndrome, etc[1,2]. MGUS is an asymptomatic, premalignant disorder characterized by monoclonal plasma cell proliferation in the bone marrow and absence of end-organ damage such as osteolytic bone lesions, anemia, or renal failure[3]. It shows the risk of progression to MM and associated plasma cell neoplasms[4]. MM arises from the malignant transformation of post-germinal center plasma cells. The origin of the cells is distinctly different in CML and PCD. There were several cases of coexistence of CML and MM. However, there was few distinctive report about the evolution from MGUS to smoldering multiple myeloma (SMM) and to MM in patients with CML complicated with PCD. In this case report, we described a patient who developed MGUS that progressed to SMM and eventually to MM while being treated with dasatinib for CML. The tyrosine kinase inhibitor (TKI) treatment and cytogenetic change may contribute to this phenomenon.

No special physical signs and symptoms were reported before. He did not appear to have a history of exposure to toxic agents or irradiation.

The patient did not have previous medical history.

No other special physical signs.

At first, his serum creatinine was 110.18 μmol/L. His lactate dehydrogenase was 364.04 U/L. His total protein and albumin were normal. His 24-h urine for total protein was 1.82 g/24 h. His serum immunofixation electrophoresis was weakly positive. Quantitative reverse transcription PCR using international scale for BCR/ABLP210 (blood) was 48.02%. The bone marrow plasma cells percentage was 1%. The diagnosis of CML was confirmed by quantitative PCR analysis 4 mo after he received dasatinib. 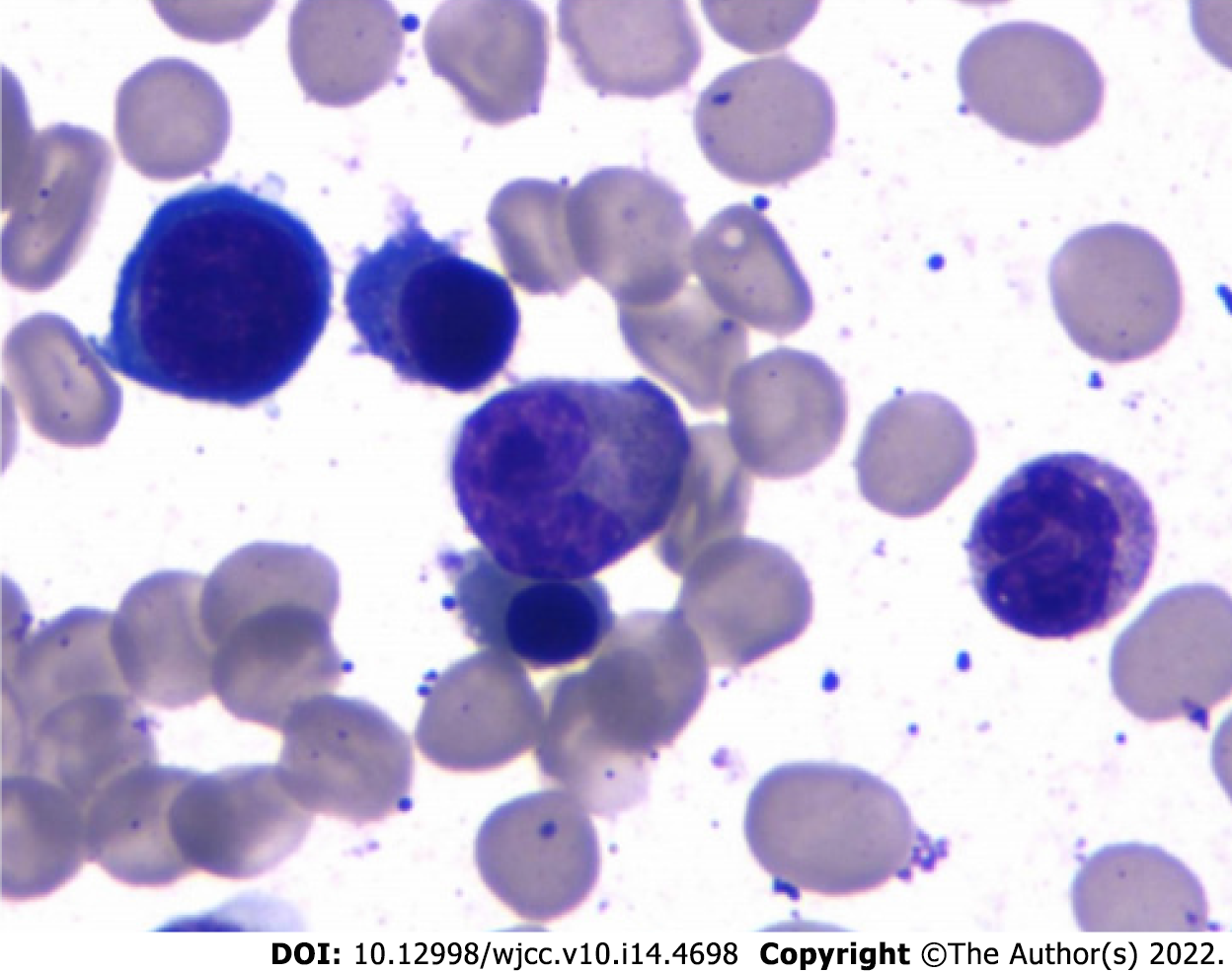 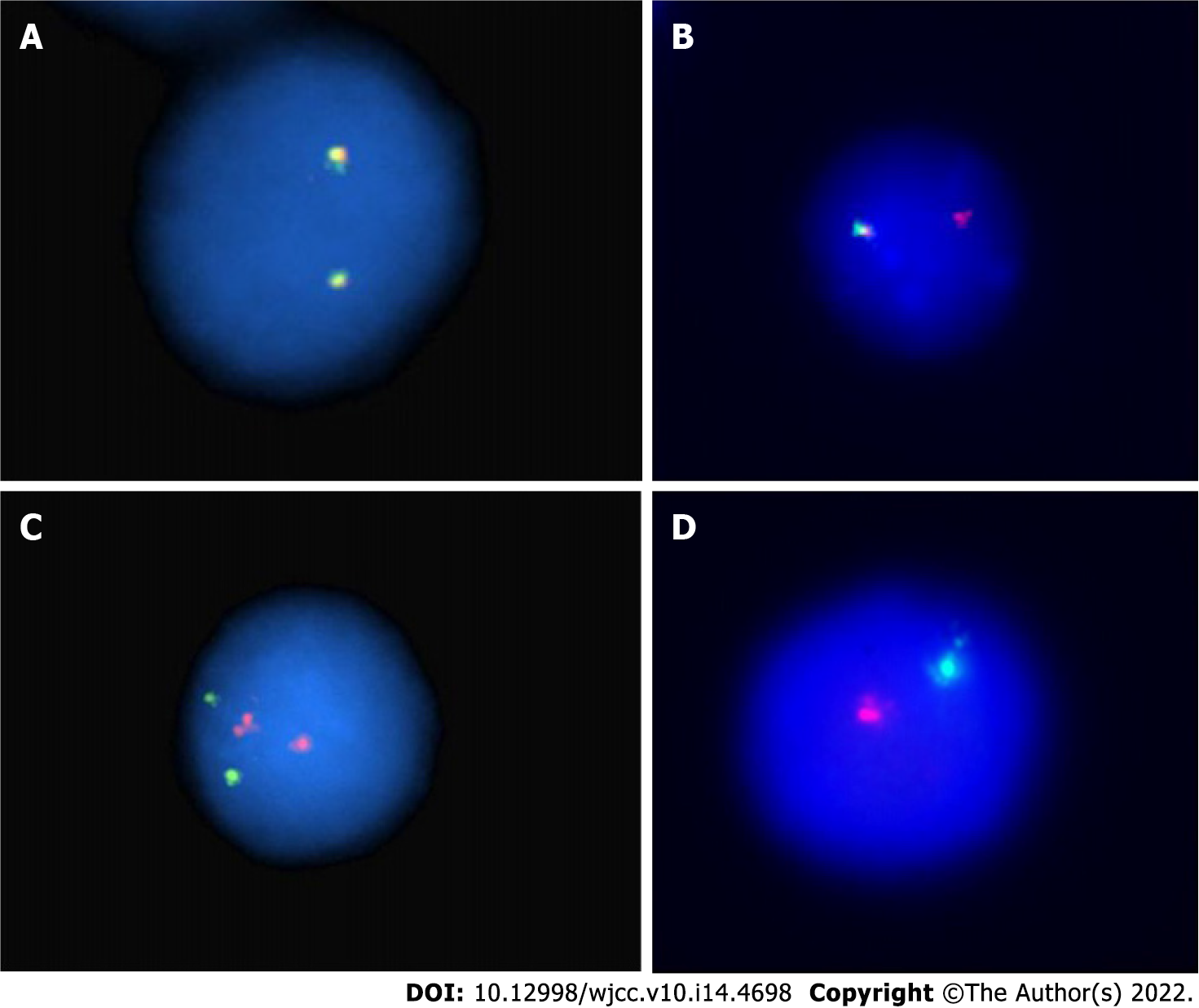 The final diagnosis for the present case was the coexistence of CML and MM.

He has finished six cycles of chemotherapy with bortezomib, lenalidomide, and dexamethasone, and he has already completed a pretransplant match. In 1 mo, he will receive an allogeneic transplant.

CML is a clonal myeloproliferative neoplasm derived from an abnormal multipotent hemopoietic stem cell that has acquired the BCR-ABL1 fusion gene, usually through t(9;22) (q34;q11), also known as the Philadelphia chromosome. The derivation of this clonal population from a multipotent hematopoietic stem cell was supported by cytogenetic studies[5]. In rare cases, BCR-ABL1 has been described in essential thrombocytosis, myelodysplastic syndrome, MM, and malignant lymphoma.

MGUS is a clinically asymptomatic premalignant clonal plasma cell. Smoldering myeloma describes a stage of disease that has no symptoms and no related organ or tissue impairment.

In this case, the patient was diagnosed with CML initially, and 4 mo later was confirmed with a diagnosis of MGUS, which ultimately progressed to MM. The hypothesis is that CML and MGUS can occur simultaneously because of elevated serum light chain at the time of diagnosis of CML. Regrettably, no further examination was carried out at that time to verify the simultaneous occurrence of CML and MGUS.

The cause of coexistence of CML and PCD in 1 patient remains unclear. The paramount etiology may be what precursors commonly referred to as “clonal hematopoiesis of indeterminate potential” leads to both CML and MM cells in a patient[6]. Clonal hematopoiesis is often detected by next-generation sequencing, chromosomal analysis, FISH analysis, PCR, and other techniques. Dysplasia and blasts were not discovered in bone marrow in the early stage of the disease, which could not verify the pathogenesis. Meanwhile a new study also showed that all patients with myeloma go through the stage of MGUS, but it is often unrecognized for some reason or it is subclinical[7].

Another hypothesis is secondary malignancies related to TKI treatment of CML. Gunnarsson et al[8] studied 868 patients diagnosed with CML in Sweden in 2002, and results indicated that CML patients had a high risk of developing a second malignancy in the TKI era. The common malignancies include the following: gastrointestinal cancer, nose and throat cancer, prostate cancer, and breast cancer but not hematological cancer. However, whether the cause leading to a secondary malignancy is associated with TKI treatment or CML disease itself is uncertain. After all, multiple studies displayed that secondary cancers in CML were often found in early stage after the diagnosis of CML. The higher immunosuppressive effects and the DNA repair mechanisms of TKI may be involved in the phenomenon. For CML disease itself, BCR/ABL also participates in regulating cell apoptosis, proliferation, and intercellular interactions and promotes genomic instability, etc. Therefore, both the TKI treatment and CML disease itself may play an important role in the coexistence of CML and PCD in our case[8,9].

Studies show that the rate of progression from MGUS to MM is 1% per year but approximately 10% per year for SMM[10]. We want to know more about how this patient progressed from MGUS to SMM and then to MM under the circumstances of CML. Gene translocation may contribute to initiating and sustaining clonal proliferation. The common translocation at 14q32 and deletion of 13 in normal cells promote the genomic instability that results in the occurrence of MGUS/SMM. Finally, mutations in RAS genes, p16 methylation, abnormalities involving myc family of oncogenes, secondary translocations, p53 mutations, and angiogenesis play an important role in promoting the development of MGUS/SMM into MM. In addition to that, a higher serum free light chain ratio has been shown recently to be an important risk factor for the progression[3]. In this case, translocations at 14q32 and deletion of 13 in the patient was probably associated with the progression to MM.

Reports of the co-occurrence of CML and PCD in the same patient are rare. In the present report, we described a patient with CML. He received chemotherapy and oral dasatinib as therapy. During the follow-up, he developed MGUS and progressed to SMM and eventually to MM. Finally, the patient was diagnosed with CML and MM. TKI and cytogenetic change are thought to potentially contribute to his disease progression. Further studies should be made to better understand the etiology of the coexistence of CML and PCD.