Intracranial tuberculoma is a rare and serious type of tuberculosis, which mostly occurs in the frontoparietal and cerebellar hemispheres, with predominance in the gray-white matter junction area, while tuberculomas only in the cistern are extremely rare with only a few reported cases in the literature. We describe a unique case of isolated tuberculoma in the suprasellar cistern, with only right ocular motility disorder and upper eyelid ptosis.

A 5-year-old boy without any medical history presented with right ocular motility disorder and upper eyelid ptosis one month ago. He had no history of fever, headache, vomiting, convulsions, or limb weakness. Neurological examination showed right third cranial nerve palsy with restrictions of eye movements and ptosis, pupil dilation and negative light reflex. Imaging suggested a space-occupying lesion in the suprasellar cistern with calcification and ring-enhancement. Moreover, no Mycobacterium tuberculosis was found in cerebrospinal fluid by polymerase chain reaction (PCR). The lesion was initially diagnosed as a tumor, while postoperative pathology combined with PCR indicated tuberculoma. The patient continued postoperative anti-tuberculosis treatment. At present, the patient's condition is stable and the symptoms are partially relieved compared with those before surgery.

Tuberculosis currently remains one of the most serious infectious diseases in the world, with Mycobacterium tuberculosis (MTB) infecting more than 2 billion people worldwide, and 10% of whom develop active tuberculosis[1]. Tuberculosis is a significant cause of morbidity and mortality globally, especially in developing countries, and has tended to increase in recent years with the increase in human immunodeficiency virus (HIV) infection and the emergence of multi-drug resistant MTB. Tuberculosis can involve all parts of the body, predominantly the lungs, and tuberculosis in the central nervous system is the rarest but most serious type, accounting for 5%-10% of extrapulmonary tuberculosis and about 1% of all tuberculosis[1].

A 5-year-old boy was admitted to the Neurosurgery Department of Tianjin Huanhu Hospital on February 2021 due to right ocular motility disorder and right upper eyelid ptosis.

The patient suffered from right ocular motility disorder, accompanied by right upper eyelid ptosis and diplopia without apparent cause for one month, which had recently worsened. He had no fever, and denied symptoms of headache, vomiting, convulsions, and limb weakness. In addition, he denied fatigue, night sweats, wasting and other tuberculosis symptoms.

The patient had no history of previous disease, including tuberculosis, and he was not taking any medication.

The patient had no related personal and family history, and he denied any tuberculosis contact. Bacillus Calmette-Guerin vaccination was performed after birth.

The patient's vital signs were normal. Physical examination showed no remarkable findings of positive signs, including rales in both lungs, tenderness in the abdomen and palpable lymphadenopathy. Neurological examination showed right third cranial nerve palsy with restrictions of eye movements and ptosis, pupil dilation and negative light reflex. There were no meningeal signs. Muscle tone and tendon reflexes were normal. The patient was not found to have Marcus Gunn syndrome during the eye examination.

Routine laboratory tests, including complete blood count, hepatic and renal function and electrolytes were all in the normal ranges. MTB and HIV serologies were negative.

The patient’s brain computed tomography (CT) scan showed a mixed density mass in the suprasellar cistern with poorly defined borders, and multiple patchy calcifications were observed within it, with intact adjacent bone structure (Figure 1). A brain magnetic resonance imaging (MRI) scan showed that the lesion was approximately 1.6 cm × 2.2 cm × 1.5 cm, downward involving the prepontine cistern, with clear borders, and the lesion appeared isointense on T1-weighted images (T1WI) and hypointense to isointense on T2-weighted images (T2WI), with irregular ring-enhancement after injection of gadolinium (Figure 1). No abnormality was observed on a plain CT scan of the patient’s chest, therefore active pulmonary tuberculosis was not considered. 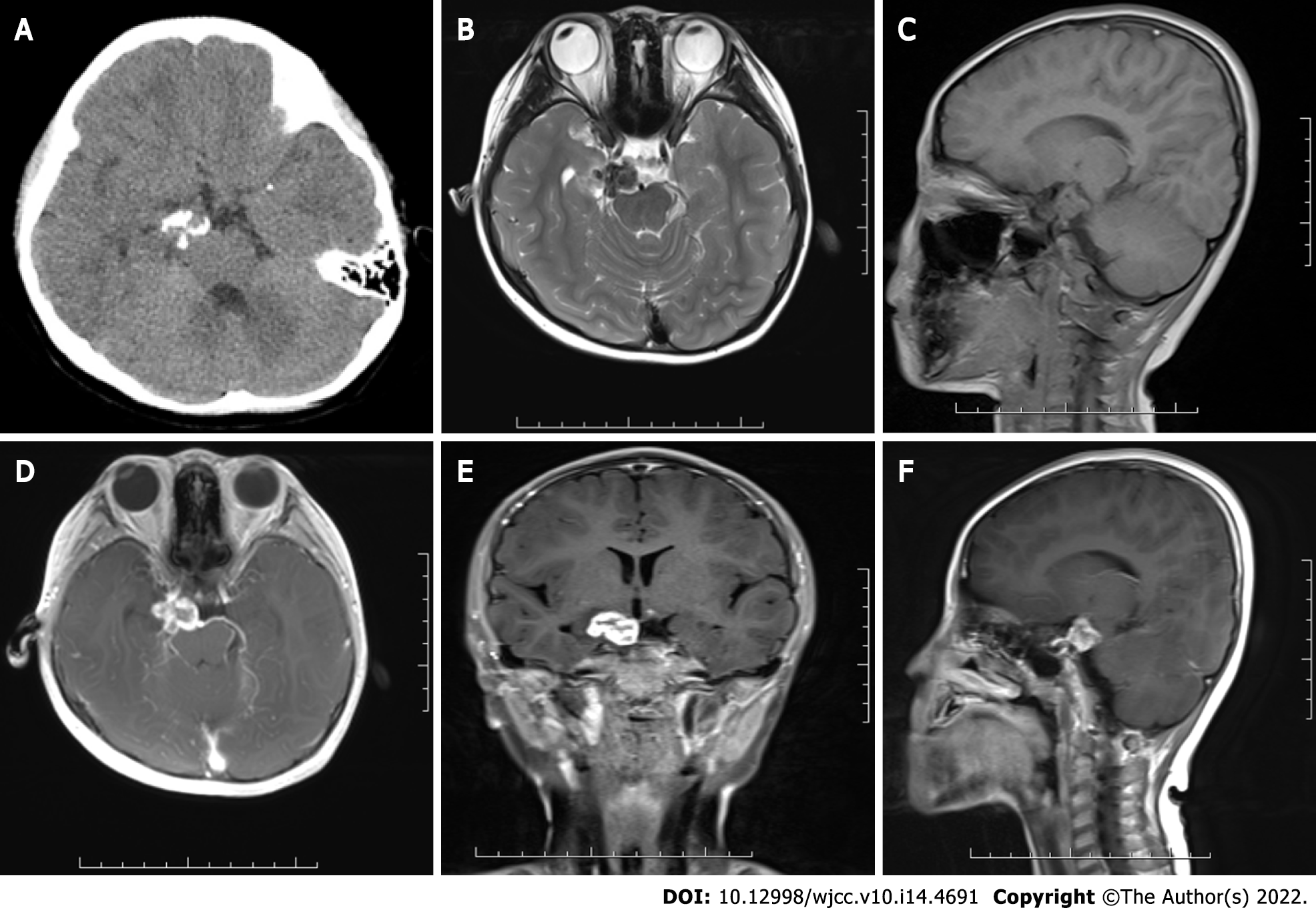 To determine the presence of MTB in cerebrospinal fluid (CSF), which suggested tuberculosis, the patient subsequently underwent lumbar puncture. The CSF was clear with normal pressure and negative polymerase chain reaction (PCR) for MTB.

The patient’s clinical manifestations, physical signs, and imaging characteristics were combined to make a preliminary diagnosis of tumor; therefore, surgery was performed through an inferior temporal approach. A mass was observed above the petrous apex, with a small part protruding into the perimesencephalic cistern. The P2 segment of the posterior cerebral artery (PCA) and oculomotor nerve were compressed and closely adhered to the mass. To avoid damage to blood vessels and nerves, the mass was not forcibly removed from the adhesion with PCA and the oculomotor nerve. The final diagnosis was made after surgery, based on a histopathological examination and PCR of the resected tumor. Grossly, the mass was slightly firm with white caseating contents. Histopathology of the mass showed epithelioid cell hyperplasia nodules without tumor cell proliferation. The center of the nodules showed caseous necrosis, surrounded by abundant lymphocyte infiltration and Langerhans giant cells, which suggested tuberculosis (Figure 2). MTB was found in the operative specimen by PCR, thus confirming the diagnosis of tuberculoma. 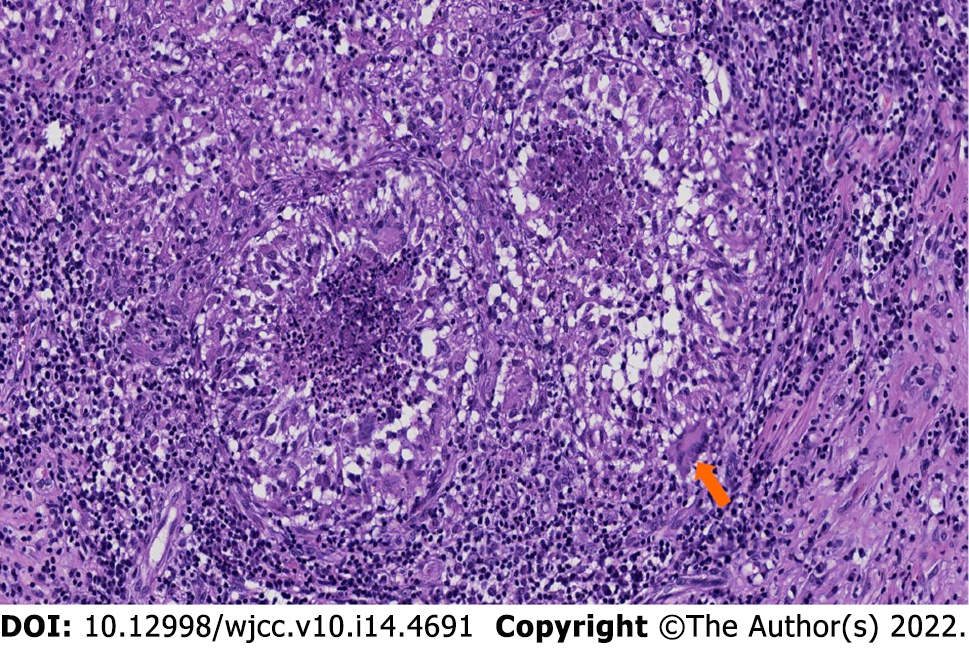 Following surgery and 3 mo of anti-tuberculosis treatment, the symptoms of ocular motility disorder and ptosis were partially relieved. The right light reflex was normal, and pupil dilation disappeared completely. Follow-up brain contrast-enhanced MRI showed a significant decrease in the size of the residual lesion (Figure 3). Anti-tuberculosis treatment will continue to be administered and we will continue to follow his condition.

Figure 3 Postoperative cranial magnetic resonance images. A and B: Axial and coronal contrast-enhanced T1-weighted images at 3 mo after surgery showed an enhanced residual lesion, which was significantly smaller than that before surgery; C: Sagittal image of the same examination showed that compression of the lesion on the pons and midbrain was reduced.
DISCUSSION

Intracranial tuberculoma is a focal tuberculosis disease that develops from hematogenous dissemination from other parts of the body and disperses in the parenchyma, meninges or adjacent tissues, forming multiple small granulomatous lesions of different sizes. As tuberculosis develops, these foci continue to proliferate and aggregate, resulting in larger mature granulomatous lesions, or tuberculomas, with solid caseous necrosis in the center containing small amounts of MTB, surrounded by an envelope of epithelioid cells, multinucleated giant cells, lymphocytes, and proliferating glial fibers[3]. Etiopathogenically, in the study of Rich and McCordock in 1933[4], the patient was infected by inhaling particles containing MTB. Many bacilli were killed but some survived, which were disseminated hematogenously to the central nervous system. Subsequently, mediated by complex cellular immunity, small lesions called "Rich foci" were formed in the suprasellar cistern. As these lesions did not rupture into the subarachnoid space, there was an absence of tuberculous meningitis.

Intracranial tuberculoma can be solitary or multiple, but most are isolated, and multiple lesions only account for 15%-34% of cases[5]. Tuberculomas can occur anywhere in the brain, with the frontoparietal lobe predominating supratentorially and the cerebellar hemispheres predominating subtentorially, commonly in the gray-white matter junctional area and around the ventricles, mainly because these areas have a rich blood supply and are the destination for hematogenous spread[6]. However, tuberculoma in the cistern alone is extremely rare, and we only found five published tuberculoma cases following a PubMed literature search. Three of these cases had multiple small tuberculomas mimicking aneurysms in the suprasellar cistern as reported by Gücüyener et al[7], diffuse multiple tuberculomas in the suprasellar cistern and lateral fissure reported by Pinto et al[8], and Fujii et al[9] reported multiple old calcified nodular lesions within the suprasellar cistern. Two cases were solitary, as in our case, one had mediastinal tuberculosis with a right prepontine cistern tuberculoma reported by Agu et al[10], while another was a suprasellar cistern tuberculoma involving the pituitary gland reported by Sundar et al[11]. The clinical manifestations of intracranial tuberculoma mainly depend on its location, size and number. Most tuberculoma patients present with epilepsy, headache, and intracranial hypertension as the first symptoms, which may or may not be accompanied by systemic symptoms such as fever, night sweats and wasting. In our case, only ocular symptoms were the main clinical manifestation, which is relatively rare and mainly due to compression of the right oculomotor nerve.

Intracranial tuberculoma is diagnosed mainly based on clinical and relevant imaging evidence. It often occurs in patients with signs of pulmonary tuberculosis infiltration or immunodeficiency[12]. However, immune function in our patient was normal, HIV was negative and his chest CT indicated no pulmonary tuberculosis infection. Therefore, the patient did not have a favorable condition for intracranial tuberculoma. In addition, the patient was negative for MTB, which may have been attributed to the fact that MTB entered the CSF circulation only when the tuberculoma envelope ruptured. As a result, the patient had no direct clinical evidence of tuberculosis infection.

Tuberculoma may appear as iso- or mixed density on CT scan, and annular or irregular enhancement after contrast injection. A typical tuberculoma can show peripheral annular enhancement with calcification and a central hypodense zone, which is called the “target sign”[6]. The manifestation of tuberculoma on MRI depends largely on the presence of caseous necrosis. Non-caseating granulomas are hypointense on T1WI and hyperintense on T2WI with uniform enhancement, while caseating granulomas are hypo- or isointense on T1WI and hypointense on T2WI with annular enhancement. A caseous granuloma has high iron and manganese content, resulting in hypointensity on T2WI[5]. The CT and MRI findings in the current patient were consistent with those of caseous granuloma. The brain MRI showed that the mass was adjacent to the right internal carotid artery and cavernous sinus, but the compression was not obvious. In addition, the radiation dose of CT angiography was high relative to the young age of the patient; therefore, CT angiography was not performed. Magnetic resonance spectroscopy has adjunctive value in differentiating tuberculoma from other intracranial diseases, and typically shows elevated lipid and lactate peaks, more choline and less N-acetylaspartate and creatine[13]. Thus, the imaging findings in the patient were not specific and there were no clinically relevant indications of tuberculosis infection, so the diagnosis of tuberculoma was extremely difficult, which was also the reason for the initial diagnosis of tumor.

The “gold standard” for the diagnosis of intracranial tuberculoma remains pathological diagnosis, relying primarily on stereotactic biopsy or surgery. Stereotactic biopsy was limited by the deep location of the lesion and the risk of neurovascular damage. Finally, the patient received surgery and was diagnosed with tuberculoma by the combination of histopathology and PCR. As the tuberculoma was tightly adhered to the P2 segment of PCA and oculomotor nerve, partial residual tuberculoma existed postoperatively; thus, the patient continued postoperative anti-tuberculosis treatment. The patient is now stable with partial relief of symptoms compared to before treatment.