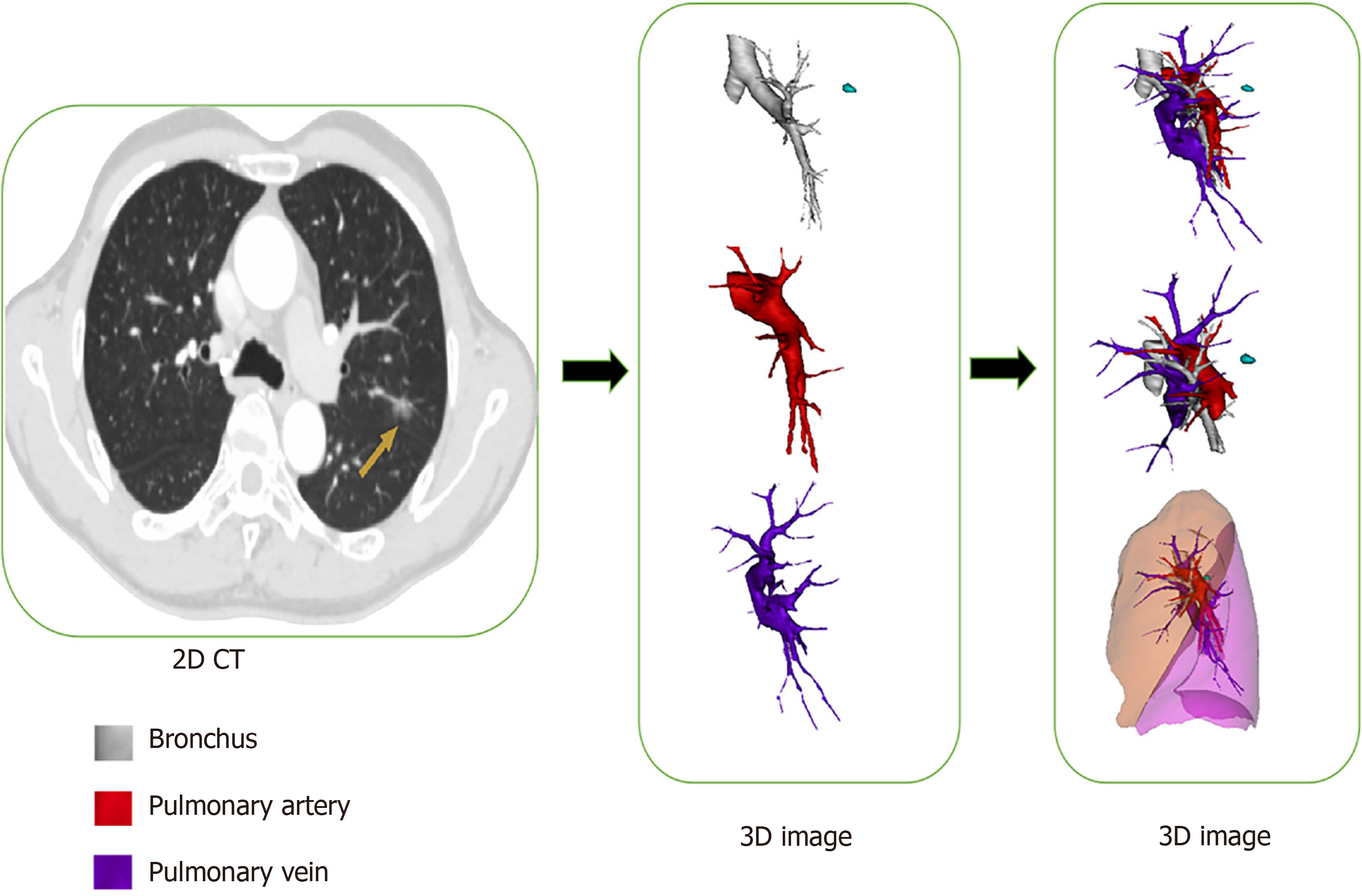 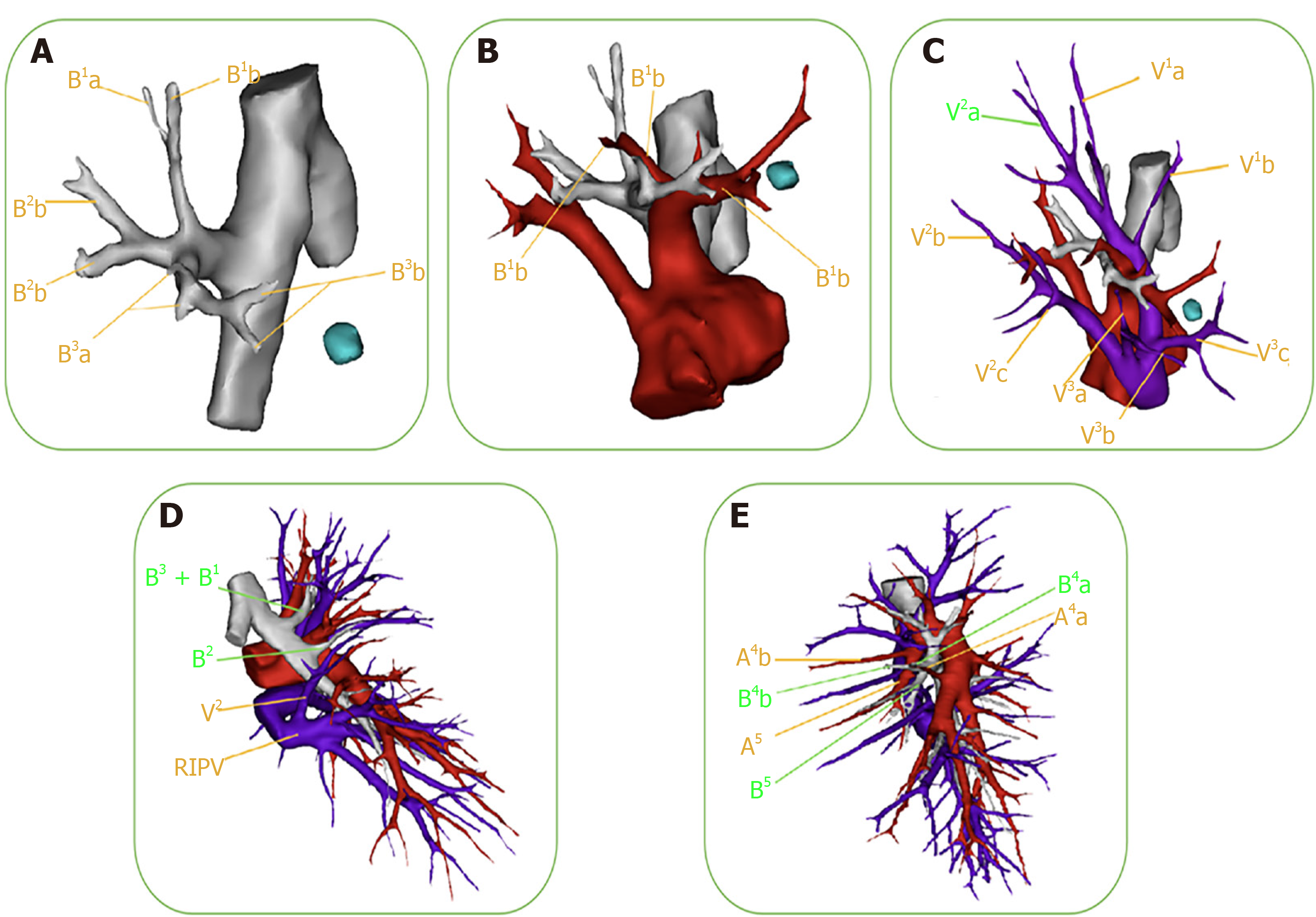 Figure 2 Presurgical confirmation of anatomical variations. Preoperative three-dimensional (3D) computed-tomography bronchography and angiography images can clearly and vividly display the targeted segmental structure and variations of vessels and bronchi. A: The bronchus of the right upper lobe is divided into the apical segmental bronchus (B1), posterior segmental bronchus (B2), and anterior segmental bronchus (B3). The distance between the B3a and B3b of the anterior segmental bronchus is very great; B: The 3D image reveals the variations of the right upper-lobe artery: the A3a originates from the distal end of the A1, while the enlarged A3b coexists with the proximal end of the A1. Care should be taken to protect A1 when dealing with the A3b during the surgery; C: The segmental and sub-segmental veins of the right upper lobe are labeled successively in the 3D image. There was no central vein, and the V2 a flowed into the apex vein (V1) through the upper pulmonary hilum; D: The 3D image reveals the variations of the B2 and V2 in the right upper lobe. The B2 branched out separately, but the B1 and B3 arose from a common stem. When the B1 is resected, the surgeon often accidentally resects the B3 as well. Additionally, the right upper posterior pulmonary vein (V2) merged into the right inferior pulmonary vein (RIPV). When the surgeon deals with the right lower pulmonary vein, the V2 could be mistakenly cut off altogether, leading to postoperative hemoptysis; E: The 3D image demonstrates the variation of the mediastinal lingual-segment artery (Med A4+5) in the left upper lobe. The A4b and A5 of the left upper lingual-segment artery originated from the upper pulmonary trunk, while the A4a originated from the interlobar-fissure artery separately. When left superior segmentectomy is performed, it is possible to cut off the A4b and A5 at the same time, resulting in decreased pulmonary blood flow to lingular-segment lung tissue and an imbalanced ventilation: Blood flow ratio.

Figure 3 Identification of sufficient surgical margin and preoperative surgery simulation. A: Chest computed tomography (CT) scan showed pure ground-glass opacity in the right upper lobe; B: We simulated surgery preoperatively, guided by a three-dimensional computed-tomography bronchography and angiography (3D-CTBA) images. The image showed that the targeted segmental structures needing to be successively resected were the V3c, A3b, B3b, and V3b; C: We precisely identified sufficient surgical margin after calculating the distance from the lesion to the predetermined cutting margin on the 3D-CTBA image. The safety margin was defined as a sphere extending at least 2 cm outside the lesion or 2 cm greater than the tumor size; D: The yellow area denotes the extent of targeted lung parenchyma RS3b. Afterward, we meticulously performed segmentectomy of the RS3b, as illustrated in Figure 4. 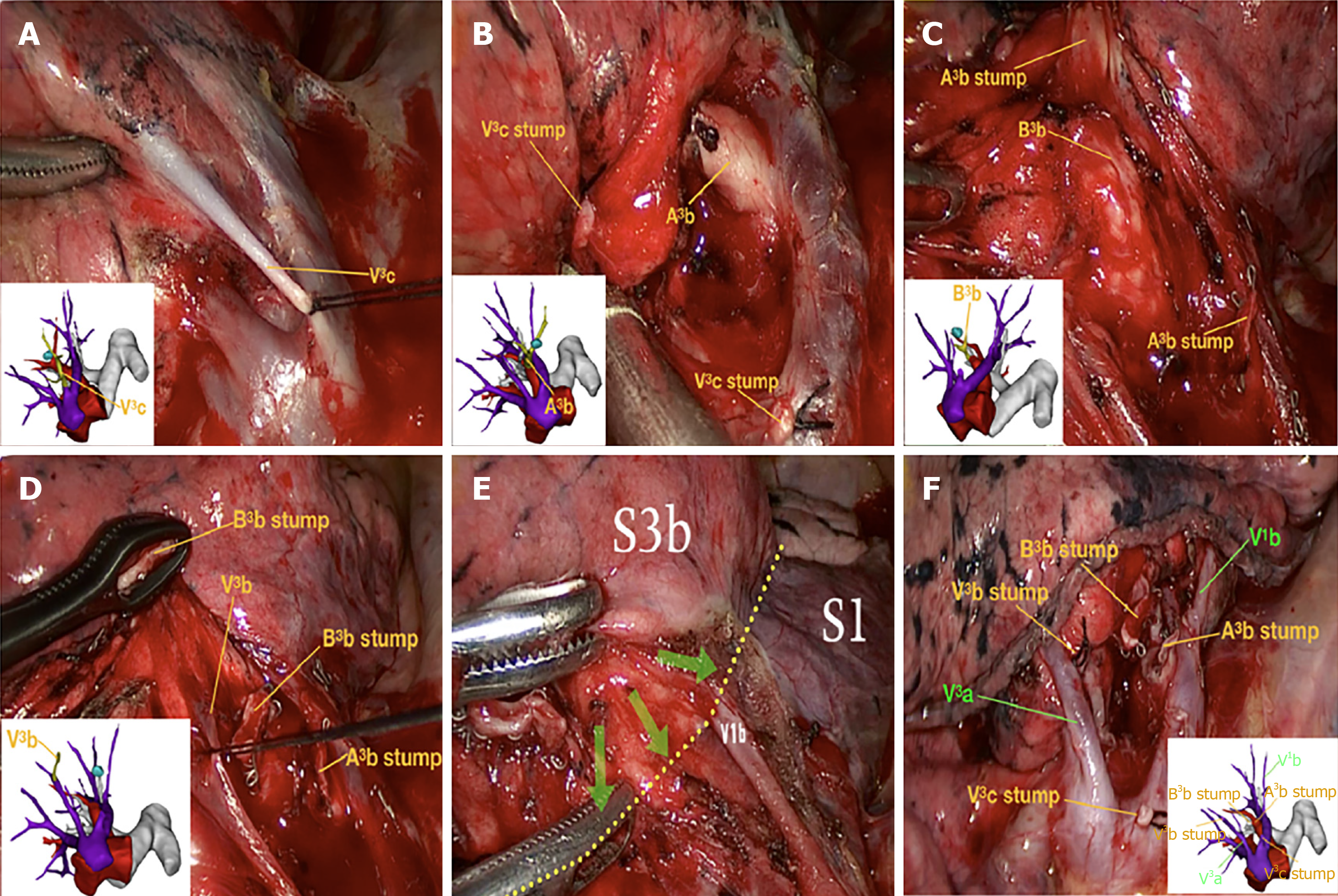 Figure 4 Illustration of the precise surgical procedure navigated by three-dimensional computed-tomography bronchography and angiography. With the assistance of three-dimensional computed-tomography bronchography and angiography (3D-CTBA), we meticulously performed thoracoscopic segmentectomy of the RS3b. A series of techniques were involved in this procedure, including location of the pulmonary nodules, resection of targeted vessels and bronchi, preservation of intersegmental veins, and identification of the intersegmental demarcation. A–D: Images showing the resection sequence for the targeted vessels and bronchi, including the V3c, A3b, B3b, and V3b, respectively. The intersegmental demarcation (yellow dotted line) was defined by the improved inflation–deflation method, assisted by 3D-CTBA. The intersegmental veins V1b and V3a were carefully preserved. The surgeons precisely identified, separated, and dissected the targeted segment based on the cone-shaped principle; E, F: View of the hilum after RS3b removal reveals stumps of targeted vessels and bronchi, which was completely consistent with the preoperative 3D-CTBA images.