Primary appendiceal tumors are histologically diverse and have an insidious onset and few specific clinical manifestations. In the majority of cases, these tumors are discovered after appendectomy during pathological exam of the resected tissue. Treatment may include appendectomy (simple or radical) and right hemicolectomy depending on factors such as histological type, tumor size and lymph node/organ involvement. The aim of this case study is to describe a rare case of a giant appendicular mucocele and raise awareness of this condition and its management options and follow-up protocol.

We present the case of a 43-year-old patient who presented to our emergency department with mild right lower quadrant pain. After the initial check-up and imaging exams, he underwent surgery, where a giant 20 cm × 13 cm appendicular tumor was found and resected. Appendicular mucocele was suspected due to the macroscopic appearance and was later confirmed by the pathological exam. The patient’s postoperative evolution was uneventful, and after discharge, he was included in our follow-up program.

In conclusion, mucinous appendiceal neoplasms embody a rare pathology; they are asymptomatic or have few, unspecific clinical signs and in many cases are discovered after appendectomy.

Core Tip: Mucinous appendiceal neoplasms represents a rare pathology with unspecific sometimes asymptomatic clinical signs. Preoperative diagnosis or suspicion is important for the operative strategy. Based on staging and histological findings, simple or radical appendectomy using open or laparoscopic approach can be safely performed for low-grade appendiceal mucinous neoplasm, if the diagnostic criteria are met.

Mucinous appendiceal neoplasms represent a rare and poorly understood heterogeneous pathology that is present in less than 0.3% of all appendectomies[1,2]. They have a very low incidence in the general population, with age at diagnosis between 50 and 60 years and a male-to-female ratio slightly in favor of the latter[1,3]. These types of neoplasms are incidentally discovered during appendectomies or in routine imaging for other conditions[4]. From a clinical point of view, patients are often asymptomatic or present with right lower quadrant (RLQ) abdominal pain mimicking appendicitis; in most cases, laboratory findings are unspecific[5].

Complications depend on tumor size and histological type and can range from intestinal obstruction and bleeding to spontaneous perforation and peritoneal dissemination causing pseudomyxoma peritonei (PMP)[3,6].

In surgical treatment, the open approach is preferred to laparoscopic surgery for large appendiceal tumors due to the risk of iatrogenic rupture and mucin spread in the peritoneal cavity that can cause PMP, although minimally invasive approaches such as the robotic-assisted approach and the hand-assisted laparoscopic approach can be considered safe in the resection of appendiceal mucoceles in selected patients[7-11]. We present our experience in a case of a giant appendiceal mucocele as well as diagnostic methods, surgical management and prognosis for this rare pathology and we discuss the main problems encountered in the management of the case.

A 43-year-old overweight male patient with no prior medical history presented to the emergency department complaining of mild RLQ pain in the abdomen with a duration of 4 h.

The pain started 4 h before and was constant, located in the RLQ with no irradiation.

No data were available.

No data were available.

The clinical exam revealed only mild pain during the palpation of the RLQ, and usual laboratory findings were normal.

The patient underwent an abdominal ultrasound that found a large, 20 cm × 13 cm, multiseptated cystic mass in the RLQ (Figure 1). Computed tomography (CT) imaging was performed using intravenous contrast (Iomeron®) and revealed a well-defined 210 mm × 135 mm × 129 mm cystic mass that communicated with the cecum and ended like “a finger in a glove” with no other lesions (Figure 2). 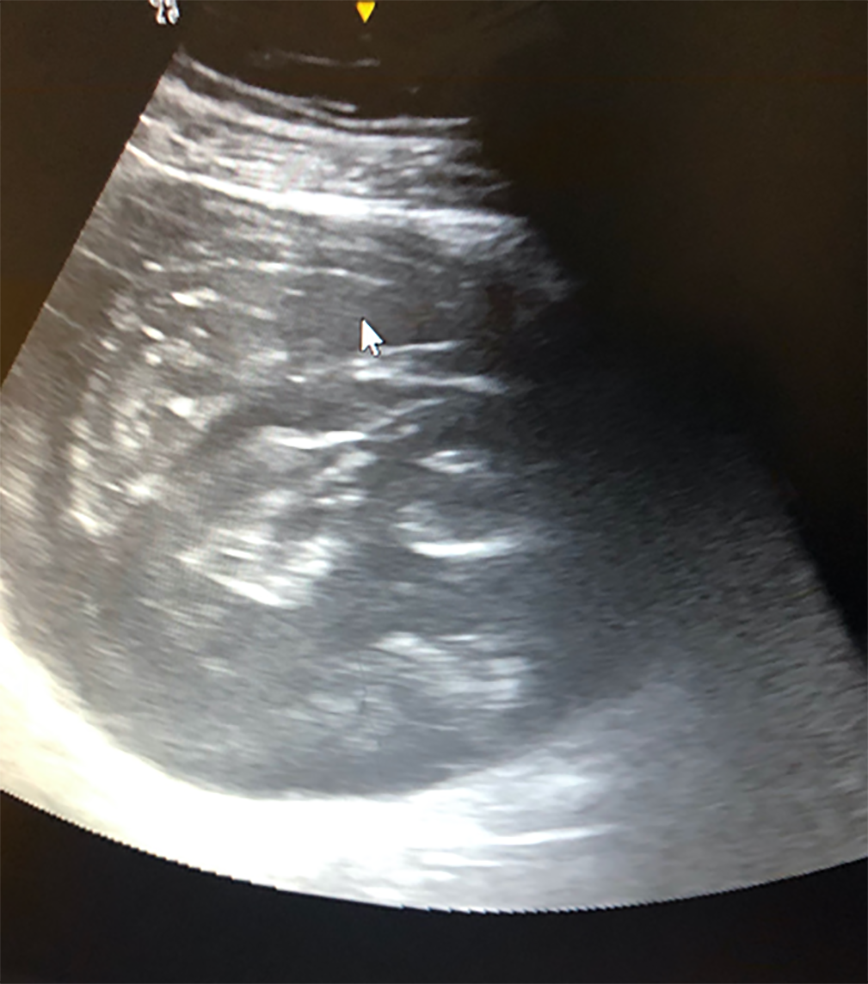 The suspicion of appendiceal mucocele was raised.

The patient was admitted to the surgical department for further investigation and surgery. Due to the size of the cystic mass and the lack of definitive diagnosis pre-operatively, we opted for an open procedure, and a lower midline incision was performed. The open approach in this case permitted an evaluation of the lesion, its implantation base and was the less risky for an iatrogenic rupture.

During laparotomy, a giant appendiceal tumor with a thin fibrous wall was found, accompanied by a small quantity of serous peritoneal fluid that was gathered for cytological and bacteriological study. The tumor had an unmodified base of implantation in the cecum (Figure 3), and no lymphadenopathy or hepatic metastasis was found. The tumor’s posterior wall and appendiceal tip were adherent to the mesentery through well-defined adhesions. Based on these findings simple appendectomy was performed after careful adhesion lysis. Further exploration of the abdominal cavity did not reveal any additional lesions. Single tube peritoneal drainage was followed by scar closure, and the resected mass was sent to the pathological department for further study. The results of the bacteriological exam of the peritoneal fluid collected during surgery was negative, and the cytological exam of the same fluid showed that only a few inflammatory cells were present with absence of mucin or epithelial cells. The pathological exam indicated that the mass was a low-grade appendiceal mucinous neoplasm (LAMN) that extended into the muscularis propria and was associated with an R0 type excision margin (Figure 4). The typical findings included flattened ephitelial growth, expansive growth into the muscularis, dissection of mucin into the wall, fibrosis of the serosa but no high grade cytologic atypia as opposed to HAMN. Postoperative staging revealed a pTisN0M0 stage 0 LAMN (confined to the muscularis propria with mucin or mucinous epithelium may extend into the muscularis propria). 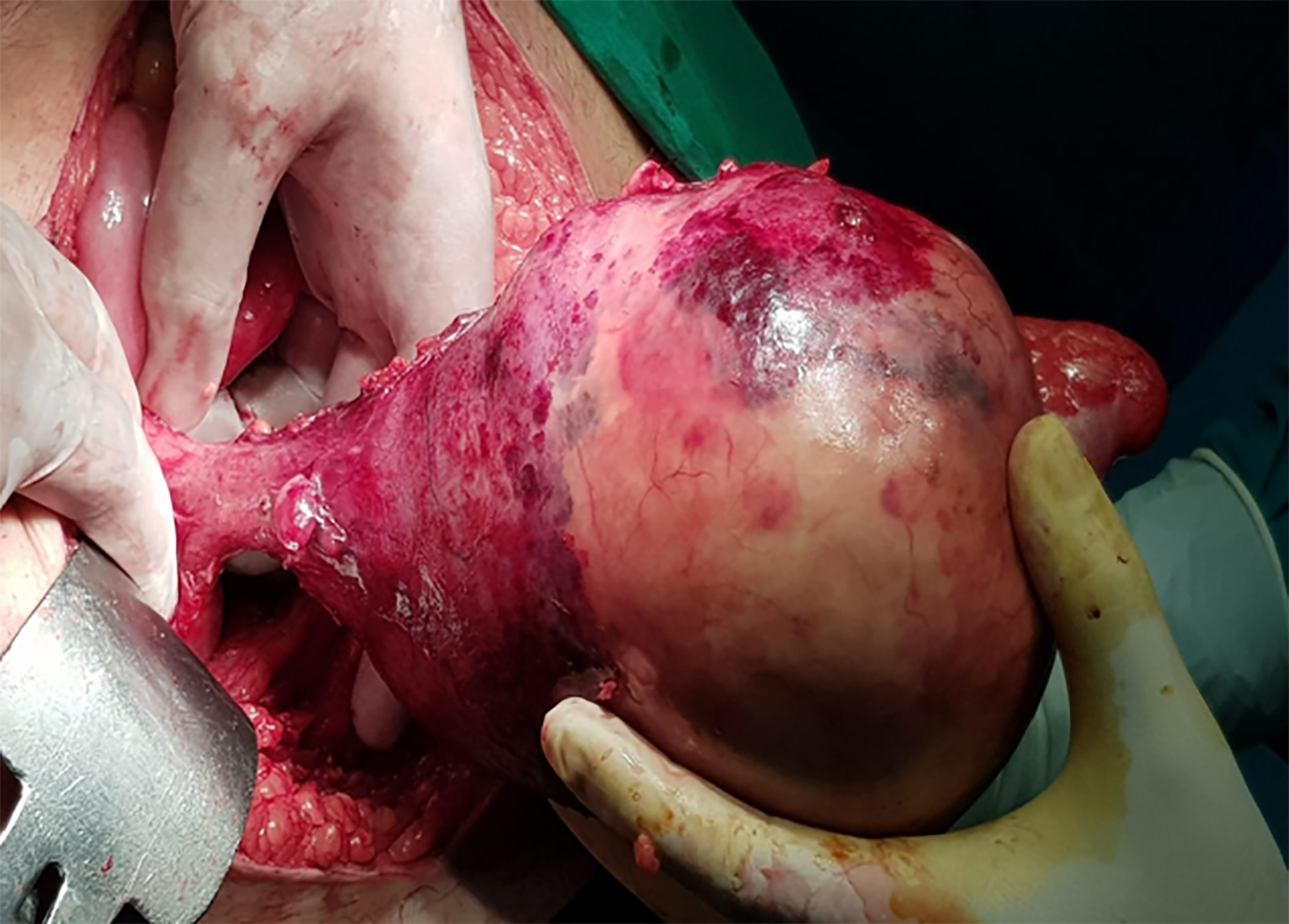 Figure 3 Intra-operatory view of a large tumor implanted in the cecum. 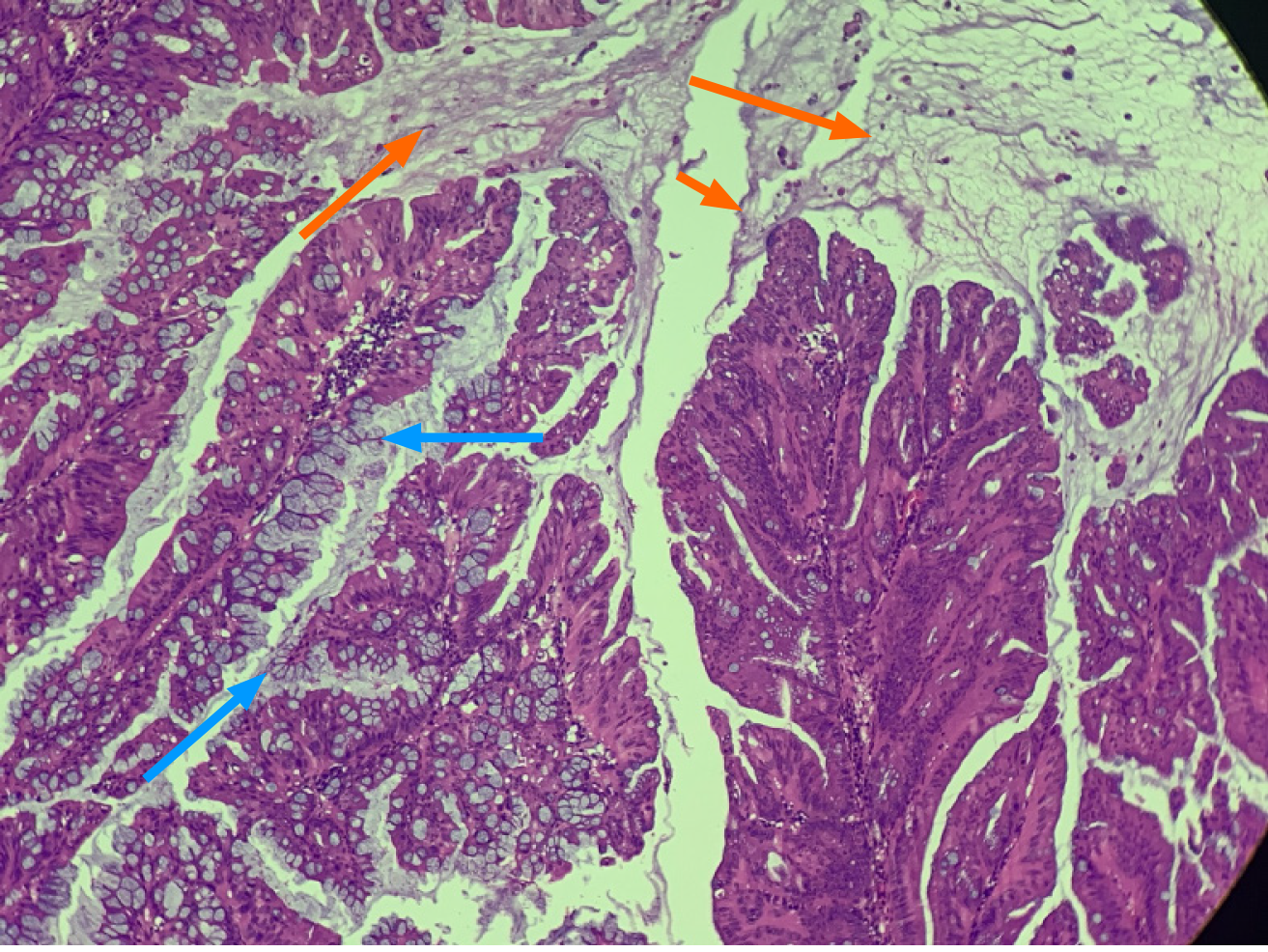 The patient did well after surgery, was discharged on the 7th hospital day, 5 d after surgery, and is presently included in our follow-up program, which consists of alternating abdominal ultrasound and CT scans every 6 mo for the next 2 years.

Appendiceal lesions are a rare entity; in a 10-year Dutch study, the incidence of appendiceal lesions was approximately 9 per million persons per year, with one in 113 resected appendices presenting a lesion (benign or malign in nature)[1]. The benign-to-malignant ratio was approximately three to one, although more recent studies present a higher disease incidence, malignant lesion rate and decreased age at diagnosis[1,12,13]. Due to confusion in diagnostic terminology, contentious for many years, a consensus on classification has been reached by the Peritoneal Surface Oncology Group, grouping mucinous appendiceal neoplasms into adenoma, LAMNs, high-grade appendiceal mucinous neoplasms and mucinous adenocarcinomas[14].

Patients with appendiceal tumors have unspecific clinical signs or are asymptomatic, and in almost half of cases, they are diagnosed with acute appendicitis; therefore, preoperative imaging plays an important role not only in diagnosis but also in operative strategy[12]. Ultrasound, which is fairly sensitive, is best suited for suspected cases and, when complemented by CT, is largely used for the diagnosis, staging and follow-up of appendiceal tumors. However, magnetic resonance imaging (MRI) is more sensitive in identifying peritoneal disease[15]. Sometimes access to MRI is difficult in emergency cases, as it was in our patient, CT remaining the best available choice.

The standard of treatment in appendiceal tumors for many years has been appendectomy (for tumors under 2 cm) and right hemicolectomy (for tumors larger than 2 cm), although studies have suggested that an intact mucocele with a normal base of implantation in the cecum is in most cases a rather benign lesion and simple, radical appendectomy can suffice with no difference in survival between these types of procedures[3,7-11,16,17].

In situations where total removal of the primary tumor cannot be performed by simple or radical appendectomy, where tumor lymph node involvement is found, or when a nonmucinous neoplasm type is present during pathological exam, right hemicolectomy is recommended as the standard procedure[7-11]. Laparoscopic surgery has gained ground over the open approach in the last two decades, although open surgery can be more reliable in large and giant tumors due to the risk of iatrogenic rupture and mucin spread in the peritoneal cavity[7-11]. Having this in mind, we preferred the open approach in our case in order to perform a complete local resection and then determine whether additional surgery is needed based on the final pathological results of the excised specimen. We also believe that especially for large lesions the open surgical approach allows a better damage control of the potential rupture and iatrogenic lesions. Also intraoperative findings allowed us to perform simple appendectomy, thus avoiding a right hemicolectomy in a young patient.

Mucinous appendiceal neoplasms are a rare pathology that present with unspecific clinical signs and, in many cases, are asymptomatic. Preoperative diagnosis or suspicion is important for the operative strategy and choice of operating technique. Based on histological findings and careful staging, simple or radical appendectomy can be safely performed for LAMN if the criteria are met.