Research Domain of This Article
Pharmacology and Pharmacy

Thrombocytopenia is a serious complication in the medical practice of numerous drugs. Vancomycin is frequently used for the prophylaxis and treatment of suspected or identified methicillin-resistant positive infections. Several cases with vancomycin-induced thrombocytopenia (VIT) have been reported. However, these have rarely been extensively reviewed. The present report describes a case of VIT in endocarditis, and reviews all VIT cases reported in the literature.

The diagnosis of VIT can be achieved through the time-to-platelet count curve and Naranjo’s Adverse Drug Reaction Probability Scale score. The platelet count cannot be normalized simply by platelet transfusion alone, and vancomycin discontinuation is essential.

Core Tip: The present report describes a case of vancomycin-induced thrombocytopenia (VIT) in endocarditis and reviews all VIT cases reported in the literature, in terms of indications, diagnosis, management, and potential molecular mechanisms. The present case highlights the importance of accurate diagnosis of VIT in endocarditis, which can be achieved through the time-to-platelet count curve and the Naranjo’s Adverse Drug Reaction Probability Scale score. The platelet count cannot be normalized simply by platelet transfusion alone, and the discontinuation of vancomycin is essential. Due to the anamnestic response to vancomycin re-exposure and the formation of vancomycin-dependent antiplatelet antibodies, the re-administration of vancomycin should be avoided.

Thrombocytopenia, which is generally defined as a platelet count of less than 100 × 109/L of blood or a decrease in the platelet count of 20%-50% from baseline[1,2], has been considered as an adverse reaction correlated to drugs used in the treatment of various diseases[3]. Drug-induced thrombocytopenia is mostly caused by immune-mediated platelet degradation and is always drug dependent, indicating that the platelet count can return to baseline levels after the discontinuation of medications[4]. Although it has been reported that approximately 10 million persons per year are suspected to suffer from drug-induced thrombocytopenia[5], its incidence has not been well-defined[4].

Antibiotic-induced thrombocytopenia has been documented[3]. The commonly reported antibiotics that induce thrombocytopenia are β-lactam antibiotics agents (such as penicillin, nafcillin, ticarcillin, cefazolin, cefuroxime, ceftriaxone, and piperacillin) and linezolid[6]. Vancomycin is a first-generation glycopeptide antibiotic that is often used for the prophylaxis and treatment of suspected or identified methicillin-resistant infections, such as Staphylococcus aureus infection[7], and has been considered as an uncommon cause of thrombocytopenia[6]. Several clinical observational studies have suggested that the incidence of vancomycin-induced thrombocytopenia (VIT) might be higher than that induced by linezolid[1]. However, the incidence of VIT may have been overestimated, because the definition for thrombocytopenia used among these studies vary. A platelet count of less than 150 × 109/L was used in two studies[8,9], and a decrease in platelet count of at least 50% from baseline was used in another study[1]. In addition, the clinical manifestations, diagnosis, and management of VIT have not been well-established, and the underlying molecular mechanisms by which vancomycin induces thrombocytopenia needs to be further elucidated[10]. Over the past two decades, cases with VIT have been continuously reported[11]. However, these cases have rarely been extensively reviewed.

In June 2019, a young male patient with endocarditis was admitted to our hospital, and he developed VIT after vancomycin therapy during the treatment for endocarditis. The present report describes this case and extensively reviews all VIT cases reported in the literature, in terms of indications, diagnosis, management, and potential molecular mechanisms.

The patient was admitted to the hospital on June 6, 2019 and diagnosed with infective endocarditis, heart failure, and ventricular septal defect, with a series of manifestations of inflammatory response syndrome.

He had a medical history of uncontrolled hypotension and rheumatic heart disease.

He denied any family history.

The electrocardiosignal data revealed a high echo of the tricuspid valve, suggesting a neoplasm. 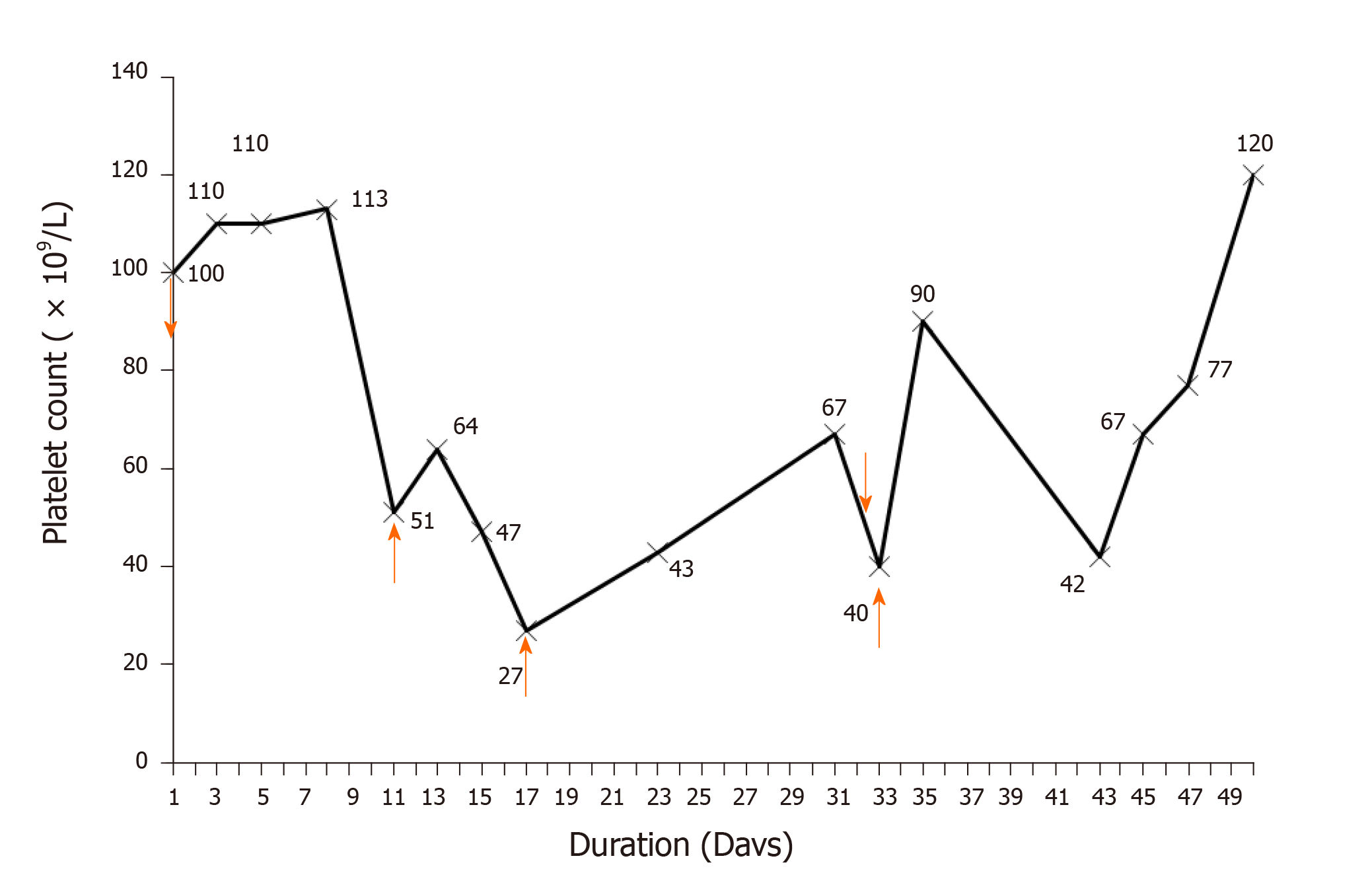 The concurrent antibiotic, benzylpenicillin, was continuously used during the period with little effect on the platelet count. The respiratory rate, white blood cell count, and hemodynamic variables remained stable, and the microbiological cultures from the sputum and urine revealed negative results, implying that no infection was correlated with thrombocytopenia for the present patient. The other causes of thrombocytopenia, including thrombotic thrombocytopenic purpura, hemolytic anemia, disseminated intravascular coagulation, and platelet-clumping pseudothrombocytopenia, were also excluded, because the results of the blood smear, bilirubin, and hemoglobin were normal. There have been no reports on the occurrence of drug-induced thrombocytopenia caused by other medications during treatment, including omeprazole, ceftazidime, and metoprolol. Therefore, a diagnosis of VIT was initially established using the time-to-platelet count curve. In addition, the Naranjo’s Adverse Drug Reaction Probability Scale score (Naranjo score) for vancomycin was 8, indicating the probable correlation between thrombocytopenia and vancomycin.

The patient was discharged from the hospital.

A literature search for all case reports on VIT published in English from April 1985 to June 2020 was performed on PMC/PubMed, Scopus, and Web of Science. Keywords, which included vancomycin and thrombocytopenia, were used to search the titles and abstracts. References of relevant case reports, according to the brief research, were also carefully checked. The demographic data (e.g., age and gender), platelet count, diagnosis, and treatment were recorded and analyzed.

A total of 36 articles that reported 37 cases with VIT were identified in the literature. Thus, the data of 38 cases, which included the case described in the present report, were reviewed and are summarized in Table 1. Among these cases, 14 cases were females and 24 cases were males. The mean age of these cases was 51.19 ± 26.98 years-old (range: 3 mo to 81-years-old). Furthermore, four children were under 2-years-old, and 36 cases were adults 26-81 years-old. The most common indications for the treatment with vancomycin were endocarditis (n = 6), sepsis (n = 6), pneumonia (n = 5), and cellulitis (n = 2). These were followed by other various indications, such as prosthetic infection, hemodialysis, bone graft, acute pancreatitis, etc. The diagnosis of VIT mainly relied on the platelet count, with or without the Naranjo score[13]. The test results for the vancomycin-dependent antibodies were available for 19 patients, and all except three were positive. Among the 27 patients with available bleeding information, 21 patients exhibited bleeding signs. The treatments for these cases comprised of platelet transfusion, prednisone, dexamethasone, immunoglobulin, and daptomycin, and the discontinuation of vancomycin. For the six cases with endocarditis, VIT was diagnosed as probable by the Naranjo score. The information on bleeding signs was available for four cases, and three of these cases presented with bleeding signs. The presence of vancomycin-dependent antibodies was examined only in two patients, and positive results were obtained in one of them. After vancomycin discontinuation, VIT was generally resolved for all patients within 4-15 d. Despite clinical significance revealed by the present literature review, it must be clearly stated that this is only a narrative review, which possesses all the limitations of the selection of papers. Thus, a methodologically acceptable systematic review should be carried out when more data with high quality are available in order to draw a firm conclusion.

The present patient with infective endocarditis was diagnosed with VIT, which rapidly progressed. The early diagnosis of VIT was performed using the time-to-platelet count curve and Naranjo score. During treatment, the repeated platelet transfusions failed to increase the platelet levels. Subsequently, simply switching vancomycin to daptomycin returned the platelet count close to the baseline level.

The early diagnosis of VIT is quite difficult due to many suspected causes, such as severe infection, disseminated intravascular coagulation, heparin, and other medications. The correct diagnosis can be masked by the simultaneous administration of medications, which can cause drug-induced immune thrombocytopenia[14] or a complicating disease, such as primary idiopathic thrombocytopenic purpura or chronic hepatitis C[15]. Therefore, the early recognition of VIT was of key importance for the following treatment. According to previous studies[6], the investigators used the platelet count at different time points as the initial diagnosis of VIT, which can reveal a definite time-independent relationship with drug administration. All other causes of thrombocytopenia were excluded. Furthermore, the Naranjo score, which has been applied to help with the diagnosis of VIT[16-18], also indicated a probable correlation between thrombocytopenia and vancomycin. Noticeably, endocarditis represents the most common indication that is associated with VIT. The probable correlation between thrombocytopenia and vancomycin can be made through the Naranjo score for all cases, indicating that the Naranjo score is a useful tool to initially diagnose VIT in patients with endocarditis. A bleeding sign is also a useful clinical manifestation to which attention should be given in order to make a definite diagnosis, since most cases would present bleeding signs when VIT occurs. This is particularly true in patents with endocarditis, based on the analyzed data. However, the value of the detection of vancomycin-dependent antibodies in the diagnosis of VIT in patients with endocarditis remains to be elucidated due to the very limited data available.

The mechanisms of VIT remains unclear. The formation of different drug-dependent platelet antibodies, including hapten-dependent, quinine-type, fiban-type and drug-specific antibodies, and other platelet destruction antibodies, are the widely documented mechanisms for VIT[11,21,24]. In contrast, naturally occurring antibodies may not contribute to VIT[25]. It has been postulated that vancomycin can bind to platelet glycoproteins and induce the generation of antibodies, which can attach to the drug-platelet complex, resulting in cell lysis[26]. In the present case, the platelet count gradually dropped after the administration of vancomycin (1000 mg per day) for 7 d. Although the vancomycin was changed to a low-dose (500 mg per day), the platelet count continued to drop. It was postulated that the persistent thrombocytopenia might be due to the anamnestic response for vancomycin re-exposure, and vancomycin-dependent antiplatelet antibodies were formed once vancomycin was re-used.