Brain metastasis from intrahepatic cholangiocarcinoma is rare. To the best of our knowledge, only a few cases have been reported. The biological behavior was complex, and treatment requires further investigation.

A 62-year-old woman complained of left limb weakness. Abdominal computed tomography showed a 5.0 cm × 5.6 cm lesion in the left lobe of the liver. Tumor markers were normal. Serological analysis indicated absence of hepatitis virus. Brain magnetic resonance imaging revealed a 1.0 cm × 1.3 cm mass in the right frontal lobe. Intrahepatic cholangiocarcinoma with brain metastasis was diagnosed by our liver cancer multidisciplinary team. After sufficient preparation, the patient underwent partial frontal lobotomy and left hemihepatectomy. Histopathological results confirmed that both the lesions were cholangiocarcinoma. Six cycles of gemcitabine combined with S1 were administered. During a 39 mo postoperative follow-up, no sign of local recurrence or distant metastasis was observed.

This case expands our knowledge concerning the complex and heterogeneous nature of tumor metastasis.

Core Tip: Intrahepatic cholangiocarcinoma is the second most common type of primary liver cancer, but metastasis to the brain is rare. Because of the low prevalence, the treatment and biological behavior are still unclear and require further study. In this work, we report a 62-year-old patient with intrahepatic cholangiocarcinoma with brain metastasis. Operation-based comprehensive treatment was recommended by our liver cancer multidisciplinary group. There was no local recurrence or distant metastasis after 39 mo of postoperative follow-up. We propose that each cancer patient should be treated regardless of disease stage, and a multidisciplinary team is important.

Intrahepatic cholangiocarcinoma (ICC) is the second most common type of primary liver cancer. However, metastasis to the brain is rare, and no more than 40 cases have been described in the literature to date. Because of the low prevalence, the treatment and biological behavior are still unclear and require further study. Here, we report the first case of ICC with synchronous brain metastasis successfully managed by surgery-based comprehensive treatment.

A 62-year-old woman was referred to Chongqing Cancer hospital due to left limb weakness for 2 wk.

Patient’s symptoms started 2 wk ago and worsened in the first 48 h.

She denied a history of smoking and alcohol abuse.

Chest computed tomography showed no abnormality. Contrast enhanced abdominal computed tomography showed a 5.0 cm × 5.6 cm lesion located in the left lateral lobe of the live. The lesion had low density in unenhanced phase, slightly higher density during arterial phase and higher density enhanced in portal venous phase (Figure 1A–C). Brain magnetic resonance imaging revealed a 1.3 cm × 1.0 cm mass in the right frontal lobe (Figure 1D–F), and the lesion had hyperintensity in T1 image and hypointensity in T2 image. There was an obvious edema zone around the lesion. No tumor was found by esophagogastroduodenscopy and colonoscopy. Because the liver lesions had an unknown etiology, an 18G needle biopsy was performed. Histopathological results showed that the lesion had the feature of ICC. 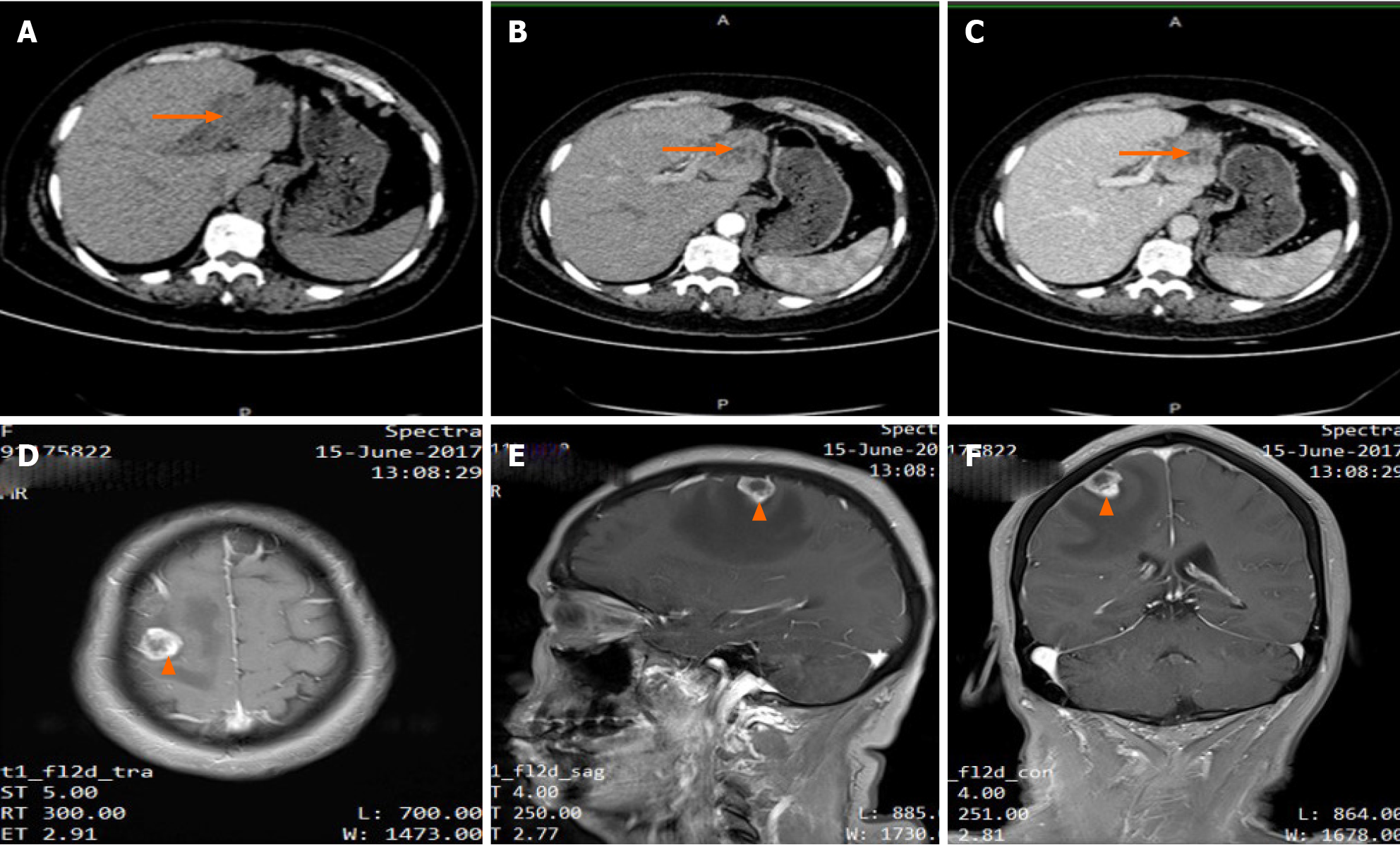 ICC with brain metastasis was diagnosed by our liver cancer multidisciplinary team (MDT), and surgery-based comprehensive treatment was recommended.

Histopathological results showed that both the lesions from the brain (Figure 2A and 2B) and the liver (Figure 2C and D) were abundant in eosinophils with large vesicular nuclei and positive immunohistochemical staining for cytokeratin 8/18 and cytokeratin 19 and negative results for thyroid transcription factor-1. Cytokeratin 20 negative results are helpful for correct diagnosis. Diagnosis of ICC with brain metastasis was then made. 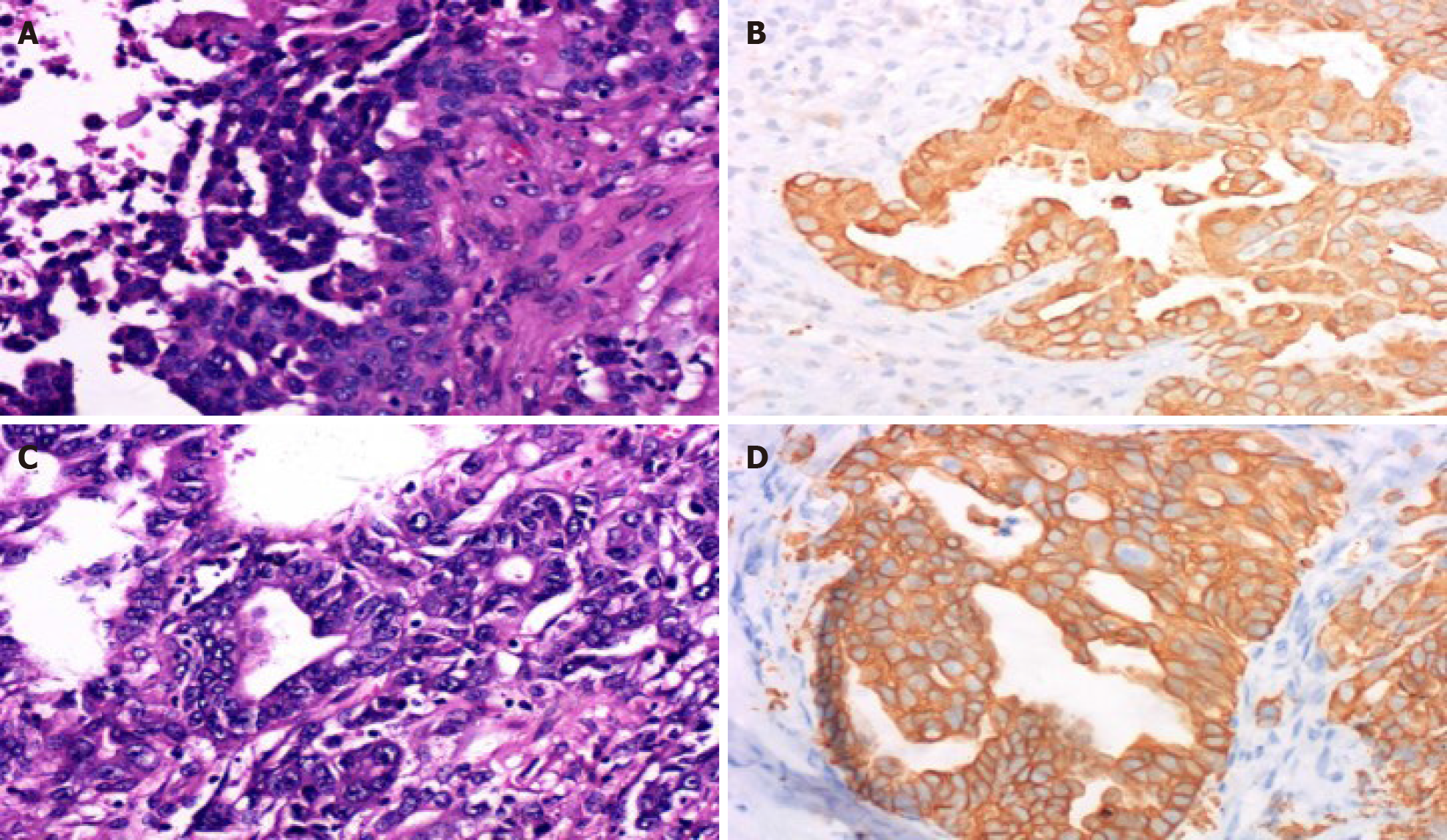 Figure 2 Pathological results of the lesions. A: Hematoxylin and eosin-stained section of the brain lesion showing abundant eosinophils with large vesicular nuclei and clear cytoplasm (× 400); B: Immunohistochemical staining was positive for cytokeratin 19 (× 400) in the brain tumor cells, which indicated metastasis of intrahepatic cholangiocarcinoma; C and D: These findings of the liver lesions were similar to those of the intrahepatic cholangiocarcinoma pathological specimen obtained by hepatectomy (× 400).
TREATMENT

She recovered with an uneventful postoperative course. There was no local recurrence or distant metastasis after 39 mo of postoperative follow-up.

ICC is the second most common type of primary liver cancer. The overall incidence of ICC has increased over the past few decades[1-3]; however, the survival rate at 5 yrs after diagnosis has not increased during this time[4]. Most patients have lost the opportunity for complete resection, which is deemed to be the most effective treatment. Moreover, recurrence is found in about 71% of patients undergoing curative resection. Meanwhile, extrahepatic metastases are seen in almost 40% of cases[5]. The most common sites for metastases are liver, lung and bone[6].

Brain metastasis from ICC is rare, and no more than 40 cases have been described in the literature to date[7]. Metastatic lesions decrease survival time and quality of life[7-9], although Yan et al[6] reported that surgical resection for liver and lung metastases improved survival outcomes[6]. There is no standard therapy for brain metastasis due to the rareness of the disease. In the present case, the patient was admitted to the hospital due to compression symptoms caused by the metastatic lesion. ICC with brain metastasis was diagnosed after examination.

Surgery-based comprehensive treatment was recommended by our liver cancer MDT for the following reasons. First, there was an opportunity for complete resection of both the primary and metastatic lesions, and no lymph node metastasis was found, which is strongly associated with surgical prognosis[10]. Second, brain radiotherapy may exacerbate compression symptoms, and the primary liver lesion may progress during therapy. Third, chemotherapeutic drugs may not cross the blood–brain barrier; additionally, there are reports that resection of brain metastatic lesions from ICC did improve survival time[7]. However, there are no reports about simultaneously or staged resection of primary and synchronous metastatic lesions, and if staged, which lesion is resected first. We resected the metastatic lesion first because the compression symptom was more serious, and simultaneous resection had a higher surgical risk.

Our patient recovered well after both brain and liver surgery. Histopathological examination confirmed our preoperative diagnosis. Then combination chemotherapy with gemcitabine and S1 was given because the patient had distant metastasis. After comprehensive treatment, the patient achieved 39 mo disease-free survival.

Some unique characteristics should be noted in this case. First, to our knowledge this is the first report of complete resection of a liver lesion and synchronous brain metastatic lesion in ICC. Second, the patient was diagnosed with an advanced stage IV tumor. Surgery-based comprehensive treatment given by our MDT achieved long-term disease-free survival. We propose that each cancer patient should be treated regardless of disease stage, and an MDT is important. Third, there was no lymph node metastasis at the time of diagnosis. This observation reflects the complexity and heterogeneity of the disease. Due to the rare occurrence of the brain metastasis from ICC, an international sample library, which needs global cooperation of the relevant institutions, will help to unravel the complex pathogenesis using omics- and system-based methodologies and further clarify the underlying mechanism behind it.

However, the current results may be limited by the retrospective nature of this study, the mechanism of brain metastasis is unclear, and it is also unclear which patients will benefit from surgery. Thus, data on more cases should be continuously collected.

This is believed to be the first report of ICC with synchronous brain metastasis successfully managed by surgery-based comprehensive treatment. Its unique characteristics associated with treatment and tumor development contribute to understanding the tumor.