Research Domain of This Article
Medicine, General and Internal

Pyogenic infectious spondylitis (PIS) is a rare condition, with an incidence between 0.2 and 2 cases per 100000 per annum. It’s most common symptom—back or neck pain—occurs in more than 90% of cases. Herein, we reported a case of thoracic PIS accompanied by pneumothorax in a 65-year-old male patient.

A 65-year-old man presented with right chest pain and dyspnea. The initial erect posteroanterior chest radiography revealed pneumothorax, which was further evaluated by chest computed tomography, revealing pleural effusion in the right lung and a paravertebral abscess with bony destruction of vertebral body. Based on magnetic resonance imaging, the patient was diagnosed with thoracic infectious spondylitis with an anterior paravertebral abscess. He was prescribed antibiotics and underwent neurosurgery due to aggravated symptoms and neurologic deficit. Tissue examination revealed that the cause of pleural effusion and pneumothorax was Staphylococcus aureus infection contiguously spread to lung pleura. After several surgical treatments with intravenous antibiotic therapy for two months and transition to oral antibiotics (rifampin 600 mg qd and ciprofloxacin 500 mg bid), the patient received physical therapy to recover balance. One month after discharge, the patient had no chest pain or dyspnea, and exhibited no elevation in inflammatory markers or new thoracic lesions.

To our knowledge, this is the very first report of a case of thoracic PIS with pneumothorax.

Core Tip: Back or neck pain is the most common symptom in over 90% of pyogenic infectious spondylitis (PIS) cases. Anatomically, abscesses occur most often in the spine posterior region because lesions are more likely to develop in larger epidural spaces that contain infection-prone fat. However, in the case presented herein, the spinal abscess initially found in the anterior area of the T8–9 disc and anterior epidural space, spreading contiguously to the lung pleura and causing pleural effusion and pneumothorax. This difference in abscess location may explain the PIS presentation with nonspecific symptoms, such as chest pain and dyspnea.

Pyogenic infectious spondylitis (PIS) is a rare infectious disorder, with an annual number of incident cases between 0.2 and 2 cases per 100000 people[1-3]. This disorder is defined as an inflammatory process of the spine and disc that may extend into the epidural space and paraspinal soft tissues. Spontaneous PIS manifests as a wide range of symptoms and a usually insidious progression. Back or neck pain is the most common symptom in more than 90% of PIS cases. Neurologic deficits and fever — two other major symptoms — are observed in 30% and less than 20% of cases, respectively. Other symptoms of PIS include nausea, vomiting, anorexia, weight loss, lethargy, and confusion[4-8]. Herein, we report a rare case of PIS that accompanied pneumothorax in a 65-year-old patient who complained of chest pain and dyspnea.

The patient’s symptoms manifested approximately two months ago and had worsened within the last 24 h.

The patient had a medical history of type 2 diabetes, the most predisposing risk factor for PIS, and his glycated hemoglobin level was 9.4%.

He had no remarkable family medical history. He smoked 10 cigarettes a day for 20 years. He drank 180 mL of 17 % alcohol three times a week. The amount of alcohol he drank per day was 13.1 g.

The patient complained of right chest pain with a rate of 7 in the visual analog scale and mild dyspnea. The patient’s temperature was 36.5 °C, heart rate was 84 bpm, respiratory rate was 16 breaths per minute, blood pressure was 100/60 mmHg, and oxygen saturation in room air was 97%. Neurological examination revealed no abnormalities.

An initial erect posteroanterior chest radiography (CXR) performed at a previous primary health care institution revealed pneumothorax (Figure 1). When the CXR was repeated at our hospital, however, it revealed no abnormalities. On chest computed tomography (CT) scan, we observed pleural effusion in the right lung and a paravertebral abscess with bony destruction of the T9 vertebral body (Figure 2). 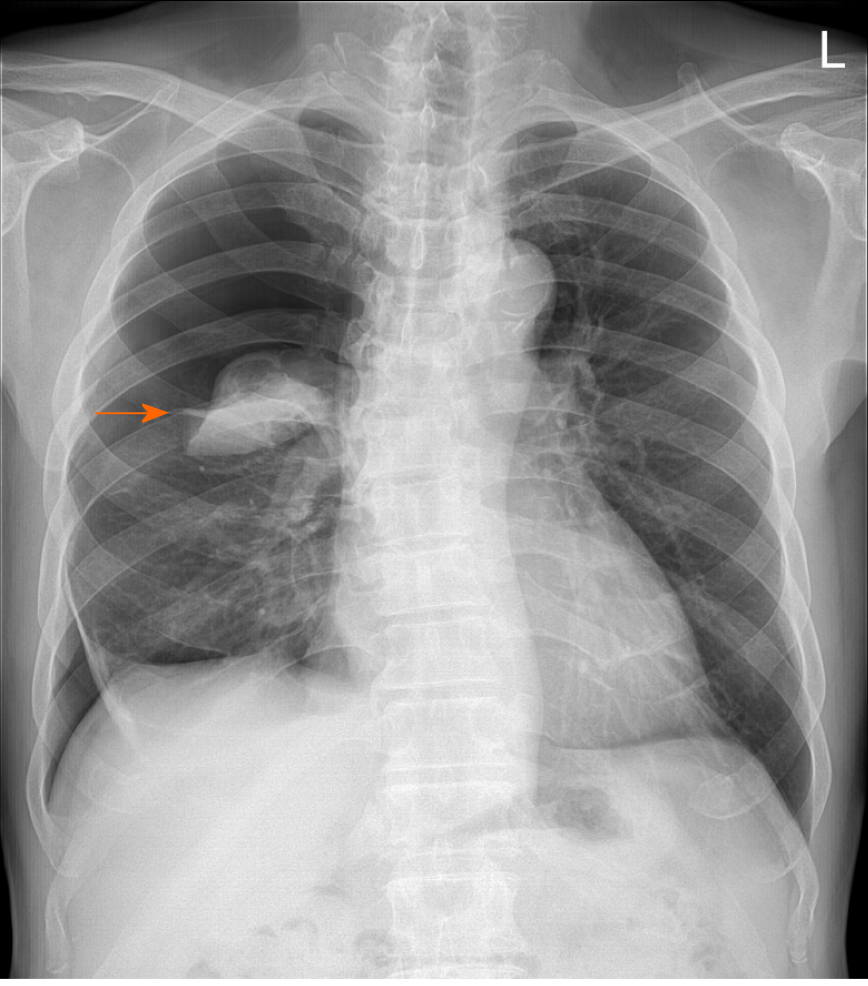 The final diagnosis is thoracic PIS due to Staphylococcus aureus.

After several surgical procedures and intravenous antibiotic therapy for about two months, the patient’s treatment was transitioned to oral antibiotic therapy (rifampin 600 mg once and ciprofloxacin 500 mg twice daily). One month after the last surgery, he was transferred to the Department of Rehabilitation Medicine. A manual muscle test was conducted (scale: 0-5), and his upper extremities received a grade of 5 and lower extremities received a grade of 4. His feet exhibited severely impaired proprioception (2 successes in 10 trials), and he received a score of 8/56 on the Berg balance scale (BBS). He was provided physical therapy for balance and gait training for 2 wk.

At follow-up visit one month after discharge, the patient had no chest pain or dyspnea. Laboratory examination revealed no elevation in inflammatory markers and chest radiograph showed no new lesions. Additionally, the patient was able to walk independently with an assistive monocane. Over a 4-mo period, his proprioception improved from 2 to 4 successes, and his BBS score increased to 20.

PIS is a relatively rare condition. The predisposing factors of PIS included diabetes mellitus, long-term steroid therapy, malignancy, liver cirrhosis, chronic renal failure, malnutrition, substance abuse, human immunodeficiency virus infection, and septicemia. Excessive alcohol ingestion may also be counted among the major predisposing factor[4]. In this patient, regular alcohol intake and diabetes mellitus might had been predisposing factors. This disease predominantly affects people aged 50 years or older, and the incidence increases with every 10 years thereafter. Men are more susceptible than women to PIS, with a case ratio of 1.5–3:1. The most common symptoms include pain, fever, limited range of motion, and localized tenderness near the affected area, whereas neurological complications are rarely found. A diagnosis of suspected PIS is based on clinical symptoms.

PIS could result in potentially systemic (e.g., endocarditis, liver abscess, and peritonitis) or local infectious complications (e.g., psoas muscle abscess, and esophageal involvement) in rare cases[9-12]. Rushworth et al[13] reported an infant that was first diagnosed with pneumonia caused by a spinal epidural abscess with Staphylococcus aureus infection. Except for this pediatric case, no other cases of pulmonary complications accompanied by PIS have been reported to the best of our knowledge.

Anatomically, abscesses usually occur in the posterior region of the spine because lesions are more likely to develop in larger epidural spaces that contain infection-prone fat[14,15]. However, in this case anterior paravertebral abscess was connected with the pleural effusion with extension to T8/9 disc, right rib and anterior epidural space(Figure 3). It might have spread contiguously to the lung pleura to cause pleural effusion and pneumothorax. This would explain why the patient complained of the nonspecific symptoms of PIS, chest pain and dyspnea. 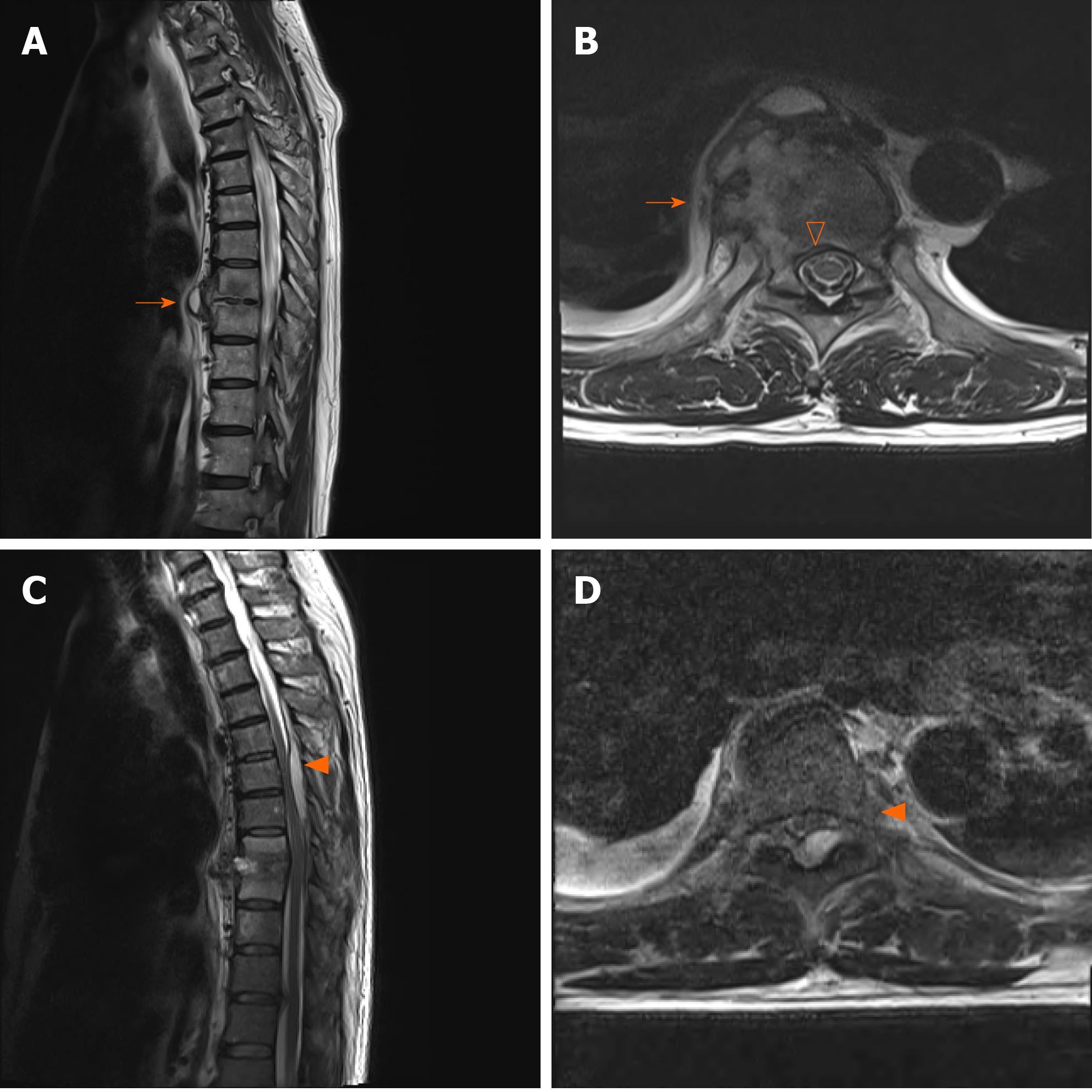 The clinical categorization of pneumothorax into PSP and SSP is of great importance, as the treatment of SSP differs from that of PSP. Schnell et al[16] suggested that chest CT scans should be performed in cases where findings are unclear or if the patients are suspected to suffer from SSP. According to the algorithm[16], the patient underwent a CT scanning, was given a final diagnosis of PIS, and received proper surgical treatment. To our knowledge, this is the very first report of a case of thoracic PIS with pneumothorax.

PIS is a rare infectious disorder. Back or neck pain is the most common symptom in over 90% of cases along with two other major symptoms, neurologic deficits and fever. We reported a rare case of thoracic PIS accompanied by pneumothorax with a chief complaint of chest pain and dyspnea. To our knowledge, this is the very first report of a case of PIS with pneumothorax.