Research Domain of This Article
Dermatology

Langerhans cell sarcoma (LCS) is a rare malignancy with poor prognosis. LCS and chronic lymphocytic leukemia (CLL)/small lymphocytic lymphoma (SLL) can occur in the same diseased tissues, such as lymph nodes or skin.

A 48-year-old female Han Chinese patient was admitted for generalized lymph node enlargement for 6 years and abdominal distension for 1 wk. She was diagnosed with small B-cell lymphoma (stage IV)/CLL (Benet stage B) and received chemotherapy. She started oral ibrutinib in February 2019. She was hospitalized on June 11, 2019, and a 1.5 cm × 1.5 cm dark-red nodule with ulceration scalp lesion was found. Biopsy revealed LCS but without CLL/SLL. She was diagnosed with CLL/SLL (Binet stage C, Rai stage IV) accompanied by secondary histiocytic sarcomas and skin LCS and received cyclophosphamide, doxorubicin, vincristine, dexamethasone, and etoposide but developed severe cytopenia. She ultimately refused treatments and discharged spontaneously. She died on September 12, 2019. The literature review showed that in patients with CLL/SLL, skin lesions of LCS are accompanied by CLL/SLL. This patient was different from the previously reported cases of skin LCS in patients with CLL/SLL.

In this patient, the skin lesion of LCS showed no concomitant CLL/SLL.

Core Tip: Langerhans cell sarcoma (LCS) is a rare Langerhans cell malignant tumor with a poor prognosis. Chronic lymphocytic leukemia (CLL) is a hematologic malignancy. We report a patient with a history of CLL/small lymphocytic lymphoma diagnosed with cutaneous LCS by skin biopsy that is different from previously reported cases. In the case report, LCS occurred on the skin, and there was no CLL/small lymphocytic lymphoma in the same lesion. A possible mechanism is that ibrutinib led to the activation of a proto-oncogene that resulted in the malignant transformation of dendritic cells. Still, this hypothesis will have to be explored.

Langerhans cell sarcoma (LCS) is a rare Langerhans cell malignant tumor with a poor prognosis[1,2]. LCS displays malignant tumor typical characteristics, such as rapid growth, local invasion, recurrence, and metastasis[2]. Positive immunohistochemical staining for CD1a, CD207 (Langerin), and S-100 protein are confirmatory of LCS[2]. There is a lack of evidence regarding the most appropriate treatment for LCS, but chemotherapy and surgery can be used[2]. Still, the prognosis remains poor, with overall survival of 27 ± 4 mo and disease-free survival of 18 ± 4 mo[2].

Chronic lymphocytic leukemia (CLL) is a hematologic malignancy characterized by progressive accumulation of phenotypically mature malignant B-cell lymphocytes in peripheral blood, bone marrow, and lymph nodes[3]. CLL is the most common leukemia in adults, with a reported incidence of about 4-6 per 100000 people per year in Western countries[3]. Small lymphocytic lymphoma (SLL) is a different manifestation of the same disease as CLL, with the main difference being that abnormal lymphocytes mainly accumulate in lymph nodes and other tissues, with no evidence of cytopenia or bone marrow involvement[3].

LCS and CLL/SLL can occur in the same diseased tissues, such as lymph nodes or skin[4-6]. We report a patient with a history of CLL/SLL diagnosed with cutaneous LCS by skin biopsy, but there was no CLL/SLL in the cutaneous lesion of LCS.

A female Han Chinese patient was admitted to the Department of Hematology of Jinan Central Hospital Affiliated to Shandong University. The patient was hospitalized on June 11, 2019 for a fourth time, and a 1.5 cm × 1.5 cm dark-red nodule with ulceration was found on the scalp. 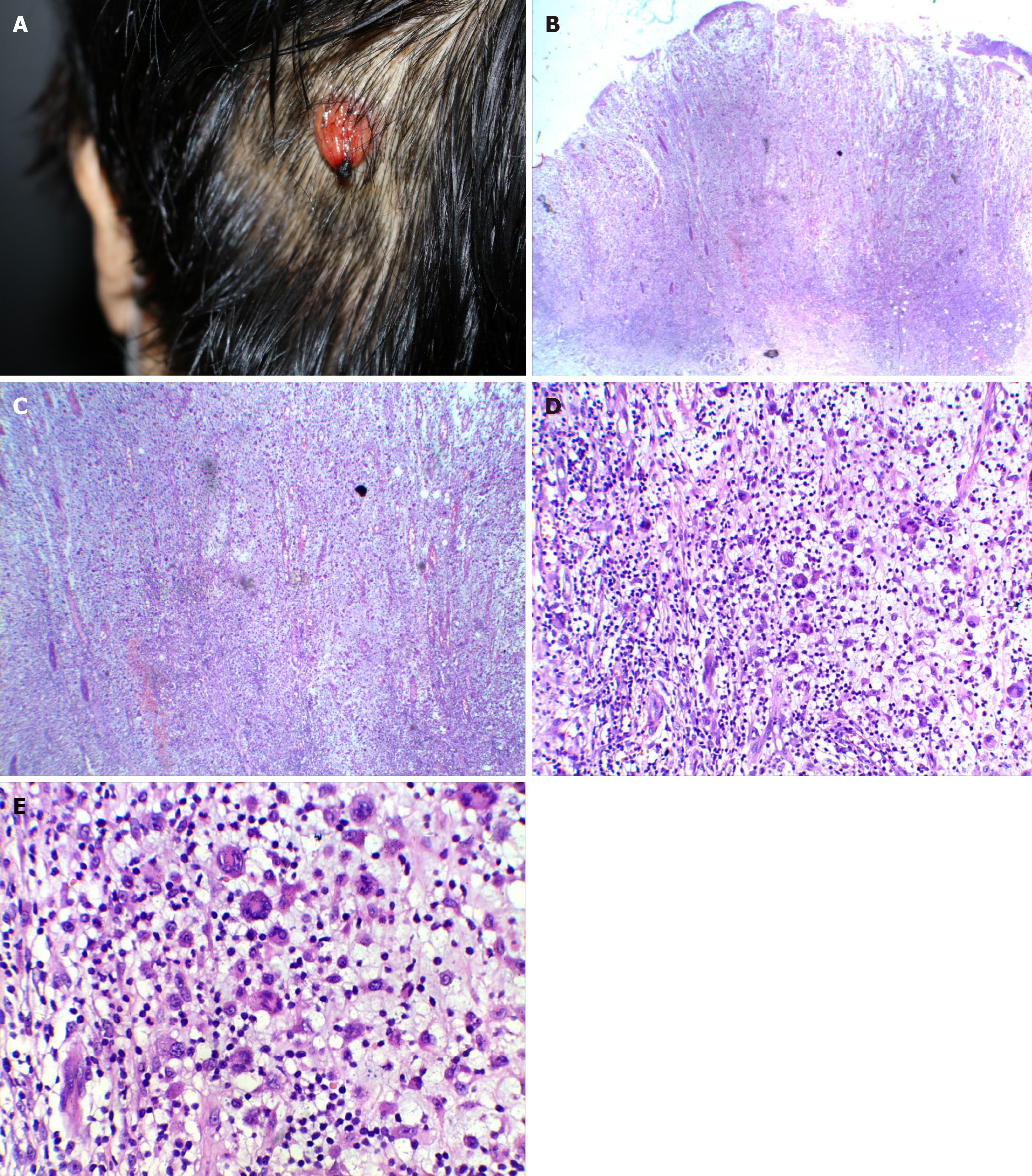 A 48-year-old female Han Chinese patient was admitted to the Department of Hematology of Jinan Central Hospital Affiliated to Shandong University in May 2012 for generalized lymph node enlargement for 6 years and abdominal distension for 1 wk. On admission, physical examination showed the enlargement of multiple lymph nodes at the bilateral neck, axillary fossa, and inguinal, with varied sizes. The largest lymph node had a 3.0 cm × 4.0 cm size and was hard, without pain upon palpation. An abdominal mass of 15.0 cm × 10.0 cm was found under the umbilicus, which was hard and without pain. The Murphy sign was negative (-). Abdominal ultrasound showed liver and spleen enlargement and multiple solid masses at the bilateral neck, supraclavicular fossa, axillary fossa, abdominal cavity, hepatic hilar region, inguinal, and pelvic cavity. Abdominal computed tomography confirmed the enlarged lymph nodes. Biopsy of the lymph nodes suggested small B-cell lymphoma/CLL. Immunohistochemistry showed CD20 (+), CD79a (+), CD5 (+), CD23 (+), BCL-2 (+), CD3 (-), CD10 (-), BCL-6 (-), CD21 (+), CD30 (-), and Ki-67 (+, 40%). Pathological examination of the bone marrow showed extremely active bone marrow hyperplasia, extensive lymphocyte proliferation, which had small cellular bodies and less cytoplasm, round or irregular cellular nuclei, fine and dense chromatin, and unclear nucleoli. Diffused distribution of granulocytes and erythrocytes, which were almost mature, was found. The number of megakaryocytes was not reduced, and they had lobulated nuclei. Reticular fiber staining showed negative results. Immunohistochemistry showed CD20 (+), CD79a (+), CD5 (+), CD23 (+), CD3 (-), and cyclin D1 (-). These findings suggested CLL. Flow cytometry of the bone marrow showed increased monoclonal B lymphocytes (about 68% of the total cells), of which the immune phenotype was CD19 (+), CD20 (-), CD5 (+, some cells), CD10 (-), and CD23 (+, some cells). Restricted expression of the light chain of membrane immunoglobulin K was found, suggesting monoclonal cells. The patient was then diagnosed with small B-cell lymphoma (stage IV)/CLL (Benet stage B). The patient refused rituximab and thus received one cycle of the FC regimen [fludarabine (40 mg, d1; Hanhui Pharmaceutical Co. Ltd, Hangzhou, China) and cyclophosphamide (0.2 g, d1-4; Baxter Oncology Gmbh)]. The superficial lymph nodes and abdominal masses reduced during treatment, and the lymphocyte count reduced from 16.19 × 109/L to 1.94 × 109/L. She then received two cycles of the FND regimen [fludarabine (50 mg, d1-3), mitoxantrone (10-24 mg; Shandong Luoxin Pharmaceutical Group Co. Ltd, Shenyang, China), and cyclophosphamide (10 mg, d1-5)] on May 31, 2012, and June 23, 2012.

The patient was hospitalized in February 2018 a third time for evident weakness and generalized lymph node enlargement. The evaluation suggested CLL/SLL stage C and Rai stage IV, which was a high-risk type. High-dose methylprednisolone (0.5 g × 3 d) and gamma globulin (5.0 g × 4 d) was given and followed by R-FC chemotherapy. After six cycles, she was in partial remission. The patient was hospitalized again on February 23, 2019 for generalized lymph node enlargement. The whole abdomen enhanced computed tomography showed multiple enlarged lymph nodes in the neck, chest, and pelvic cavity. Oral ibrutinib (0.42 g, once per day; Catalent CTS LLC) was given, and the lymph nodes diminished in size.

The patient had no history.

There was no physical examination. 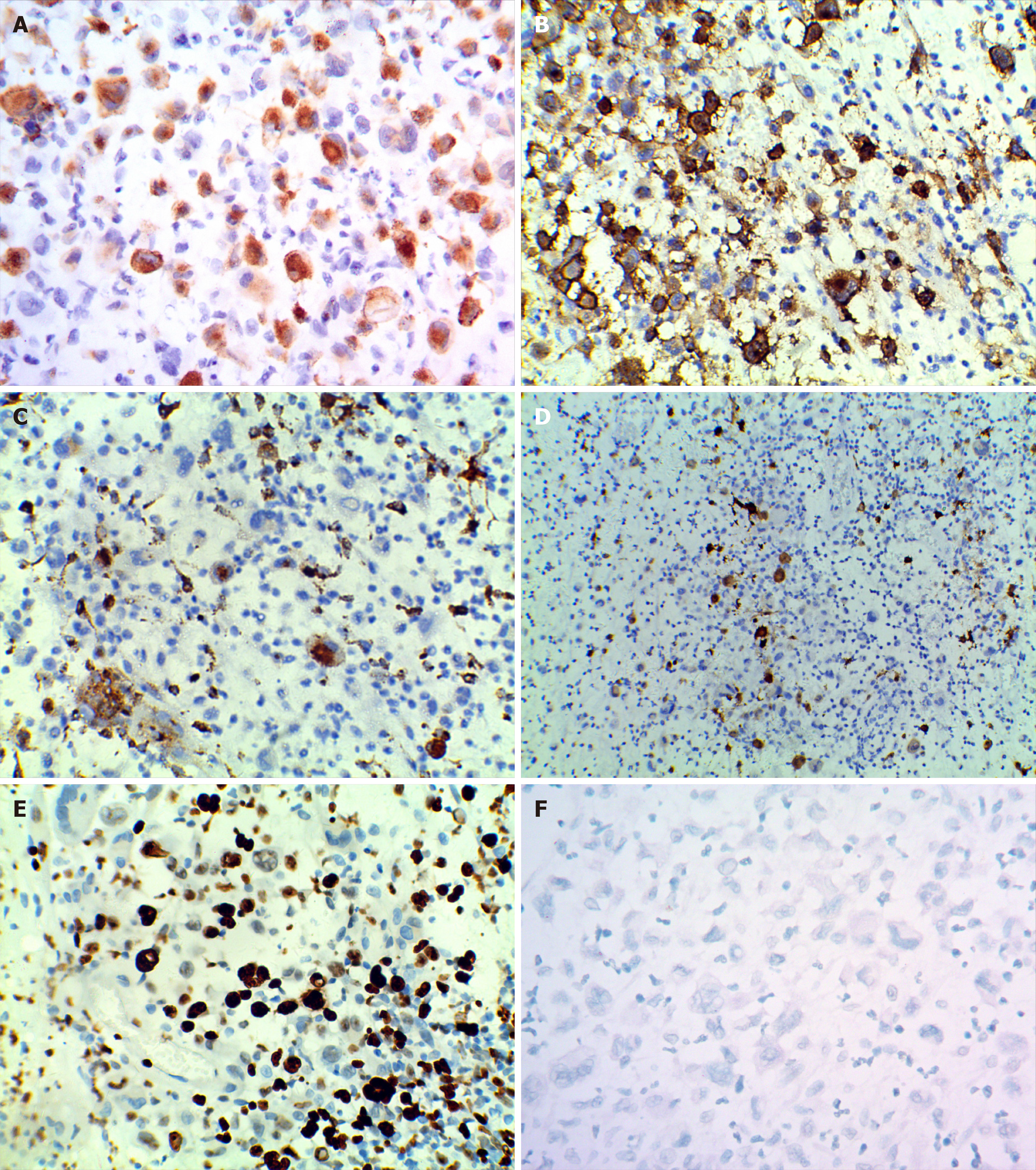 There were no imaging examinations.

The patient died of an acute intracerebral hemorrhage on September 12, 2019.

Langerhans cells are dendritic cells (DC) located in epithelial tissues and act as antigen-presenting cells[2]. LCS is an extremely rare tumor and has a very poor prognosis. The median age at presentation is 50 years, and the ratio of male to female is 1.3. Most patients die within 2 years after diagnosis. The patient reported here died 3 mo after the diagnosis of LCS[2].

The etiological factors of LCS include immunosuppression, viruses, and previous hematological diseases[2]. Immunosuppression (such as calcineurin inhibitors) can increase the risk of malignant tumors (2.7-13.7-fold), which increases with the intensity and duration of immunosuppression[7]. Cutaneous and lymphoproliferative malignant tumors are among the most common malignant tumors after transplantation[8]. Malignant tumors induced by EBV and human papillomavirus virus are the most common post-transplant cancers[9]. Merkel cell polyomavirus DNA was detected in LCS tissue samples of 7 LCS patients, and the amplification level was higher than that in Merkel cell polyomavirus-positive Langerhans cell histiocytosis; it was speculated that LCS is likely to be the result of viral infection[10]. Still, the case reported here had no history of organ transplantation, no use of calcineurin inhibitors, and negative EBV mRNA. It is unlikely that the above causes induced the LCS.

A primary history of CLL/SLL and long-term use of immunosuppressive agents may be the cause of skin LCS[2,4-6,11-13]. Previous studies showed that some CLL/SLL could transform into aggressive hematopoietic tumors of another lineage, such as LCS[2,4-6,11-13]. LCS clonally related to low-grade B-cell lymphomas and leukemias has been described[4-6]. Among the previous studies, one reported that the two malignancies were detected in the same skin biopsy[4], and three other studies reported that the two malignancies were detected in the same lymph nodes[5,6,12]. The mechanism is probably the transdifferentiation of the B cell lineage through direct transdifferentiation of neoplastic B cells into malignant histiocytes/DC, tumor lymphocytes dedifferentiate into early progenitor cells, and then progenitor cells redifferentiate into histiocytes/DCs[4]. It has been reported that the BRAF V600E mutation was found in patients with LCS and concurrent CLL/SLL[5,6]. Because CLL/SLL and LCS existed independently in this case, we did not detect a mutation in the BRAF V600E gene. Besides, the pathogenesis of LCS in this case was unknown.

The Bruton tyrosine kinase (BTK) inhibitor ibrutinib is an inhibitor of the B cell receptor signaling pathway through BTK. It ultimately prevents B cell proliferation, chemotaxis, transport, and adhesion by covalently binding to the cysteine residue (C481) in the ATP binding pocket of BTK. The effective regulation of signal transduction might control the intrinsically invasive tumors to some extent. Still, under the selection pressure by inhibitors targeting the B cell receptor signaling pathway, dedifferentiated or transdifferentiated tumor clones can appear[4,14]. In addition, enhanced maturation of BTK-deficient DC can be stimulated by lipopolysaccharides and their ability to stimulate T cells[15]. After the fusion of mature DC and tumor cells, DC can express tumor antigens in an immunogenic manner. When the DC of the tumor-bearing host engulfs apoptotic or necrotic tumor cells, these DC express tumor antigens in a tolerant manner. The tumor will defeat the host because of the tolerance, produce ubiquitous proto-oncogenes, and transform into malignant clones[16]. Since the case reported here received ibrutinib and ibrutinib can promote the transdifferentiation of B cells into DCs or stimulate the abnormal maturation of DCs, ibrutinib is a possible reason for the development of LCS in the present case. Still, the LCS lesion was not physically found at the same location as a CLL/SLL lesion but might have arisen elsewhere and moved through hematogenous migration. Since not all lesions seen at imaging were biopsied, this remains a possibility.

In conclusion, the LCS case reported here is different from the previously reported cases of LCS with CLL/SLL. In the case reported here, LCS occurred on the skin, and there was no CLL/SLL in the same lesion. A possible mechanism is ibrutinib led to the activation of a proto-oncogene, resulting in the malignant transformation of DCs, but this is only a hypothesis.