Intravascular papillary endothelial hyperplasia (IPEH) is a rare benign reactive vascular lesion that grows into an expansile compressing mass. It most commonly involves the skin and subcutaneous tissue. Spinal involvement is rare, with only 11 reported cases in the literature. We report, to our knowledge, the first case of IPEH in the cervicothoracic spinal canal and present a literature review.

A 27-year-old man presented with acute-onset neck pain, numbness, and weakness in his extremities. Magnetic resonance imaging showed an epidural mass in the cervicothoracic (C6-T1) spinal canal and vertebral hemangioma (VH) involving the C7 vertebral body. C6-T1 Laminectomy and radical excision of the mass were performed. Histopathological examinations revealed papillary proliferation of vascular endothelial cells with thrombus formation, and an IPEH diagnosis was made. By his 6-mo follow-up appointment, his symptoms were relieved without recurrence. The possible pathogenesis, clinical and imaging features, differential diagnosis, and management of IPEH were reviewed.

We report, to our knowledge, the first case of IPEH in the cervicothoracic spinal canal, treated via complete resection, and showing a favorable outcome. We found a causal relationship between spinal IPEH and VH; this partly explains the mechanism of IPEH.

Core Tip: Intravascular papillary endothelial hyperplasia (IPEH) is a rare benign reactive vascular lesion that grows into an expansile compressing mass. Spine involvement is rare, with only 11 case reports on its occurrence. We reported the first case of IPEH in the cervicothoracic spinal canal, which was treated via complete resection and had a good prognosis. We also found a causal relationship between spinal IPEH and vertebral hemangioma, and this partly explained the mechanism of IPEH.

Intravascular papillary endothelial hyperplasia (IPEH) was first reported in 1923 by Pierre Masson in a case of an infected hemorrhoidal vein. Initial reports referred to the lesion as a “Masson tumor” or hemangioendotheliome vegetant intravasculaire[1]. In 1975, Clearkin and Enzinger described the lesion as an unusual and exaggerated thrombus reorganization, rather than a true tumor, and the condition was renamed IPEH[2]. IPEHs typically occur in the skin and subcutaneous tissues of the head and neck or limbs[3]; it rarely occurs in the spine. To our knowledge, only 11 cases of IPEH of the spine have been reported. We report the first case of IPEH of the cervicothoracic spinal canal and present a literature review.

A 27-year-old man presented to the Department of Spine Surgery of our hospital with complaints of neck pain, limb numbness, and weakness.

His symptoms started suddenly, 4 d prior to hospital presentation.

The patient had no trauma history. A similar episode of transient limb numbness and weakness occurred 6 years earlier.

He denied any personal or family history of other diseases.

Physical examination revealed tenderness of the paraspinal muscle of the C6-T1 spinous process, muted sensory responsiveness to touch along the T1 dermatome, and grade IV muscle strength in the four limbs.

The results of all blood analyses — including coagulation markers, inflammatory indicators, and tumor markers — were within normal limits. 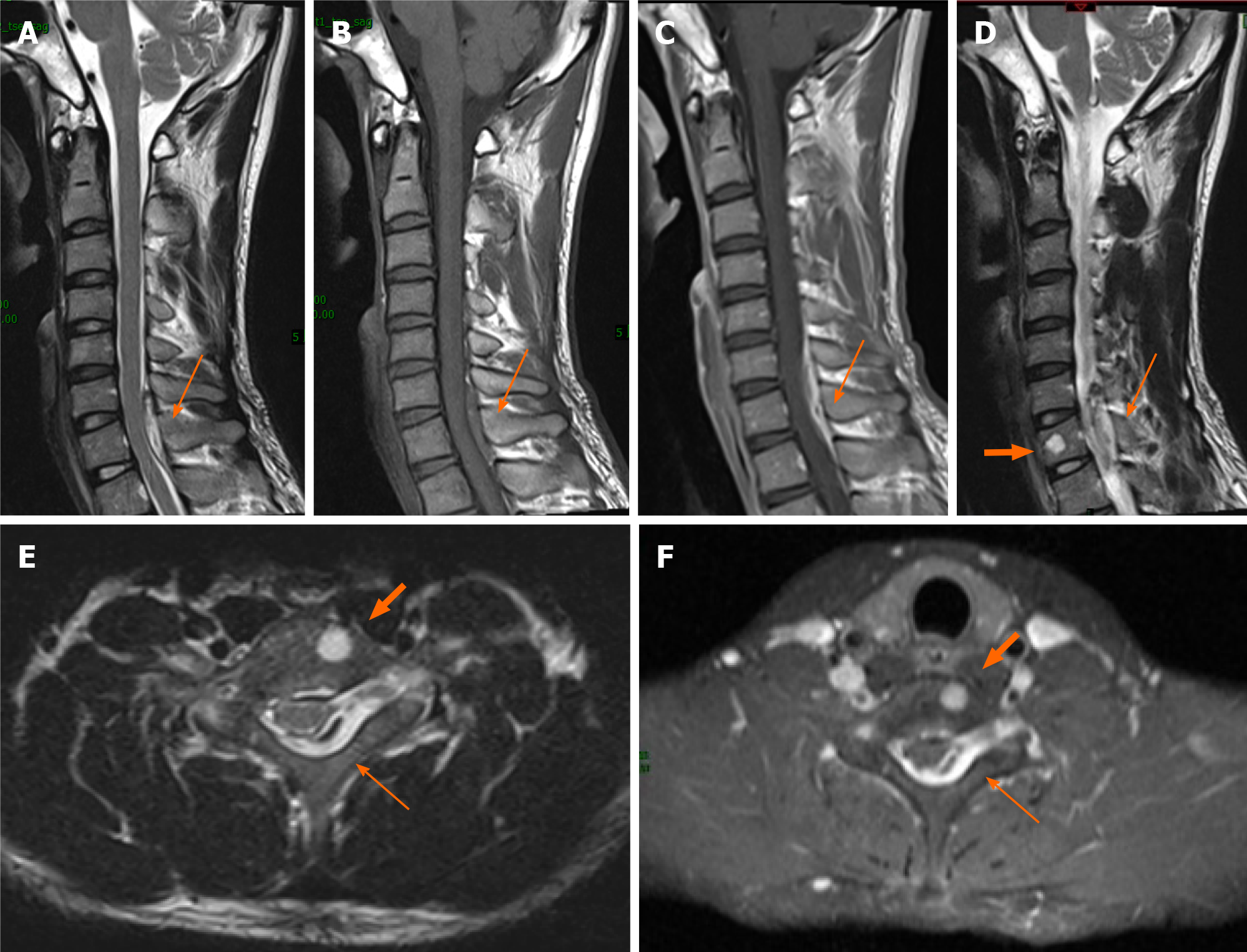 The mass was possibly an epidural schwannoma; however, we needed to exclude a nonneurogenic tumor diagnosis. The patient required surgical spinal cord decompression for symptom relief. The final diagnosis was confirmed histopathologically.

Figure 2 Intraoperative images. A: Operative view of a dark red, nodular, highly vascularized epidural mass (thick arrow) measuring 3 cm × 1.5 cm × 1 cm compressing the left side of the spinal cord (thin arrow) after C6-T1 Laminectomy. B: View of the surgeon after complete resection of the mass and decompression of dura (thin arrow) and left C7 nerve root (triangle). C: Nodular fragment of the lesion.

Figure 3 Histological features of the epidural mass. A: Hematoxylin-eosin (HE); × 100; B: HE × 200. Histopathological pictomicrograph shows dilated thin-walled vessels lined by a monolayer of obese endothelial cells (thin arrows). The lumen appears to be filled with organizing thrombi (thick arrow).
OUTCOME AND FOLLOW-UP

After the surgery, the patient showed gradual neurologic improvement. At his 6-mo follow-up, he was symptom-free, with no spinal cord compression or recurrence on MRI (Figure 4). The clinical timeline of the patient is depicted in Figure 5.

IPEH is a rare benign reactive vascular lesion that expands to form a compressing mass. There is no age predilection for IPEH, and its incidence is higher in women than in men[4], with a female-to-male ratio of 4:1 for intracranial lesions[5]. Although spinal presentations are rare, they occur more commonly in men[6]. IPEHs are commonly located in the skin and subcutaneous tissues of the head and neck or limbs[3] but have also been reported in the oral mucosa, lip, thyroid, maxillary sinus, parotid, lung, superior vena cava, adrenal gland, renal vein, forearm, foot, and intracranially[7-11]. There are 11 reported cases of spinal IPEH, including ten cases involving men and one case involving a woman, with patient age ranging from 16 years to 58 years (see Table 1 for details)[6,12-21]. Among these cases, in one case, the mass was located in the vertebral body and in the remaining ten cases, the mass was located in the spinal canal. Only one case of an intradural mass and nine cases of an epidural mass have been reported. The most common site of involvement was the thoracic spinal canal (n = 7). Of the three remaining cases, two cases involved the lumbar spine and one case involved the thoracolumbar junction. The mass in one case was multifocal, involving the cervical, thoracic, and lumbar vertebral bodies. The present report is the first report of cervicothoracic spinal IPEH.

The pathogenesis of IPEH remains controversial. Some authors believe that IPEH is an excessive reaction to a normal thrombus reorganization process[2,22-24]. Others proposed that IPEH is a benign proliferation of endothelial cells with secondary thrombosis and fibrin deposition[25]. Few authors believe that there is a causal relationship between VH and spinal IPEH. Mozhdehipanah et al[17] reported a case of IPEH in the T4-T6 spinal canal. Two adjacent vertebral bodies (T4 and T5) demonstrated VH. The author speculated that bleeding within the spinal canal subsequently formed an organized thrombus, transformed into Masson's hemangioma and manifested symptoms[17]. According to Petry et al[12], IPEH of the vertebral body develops from underlying thrombosis of the basivertebral venous plexus or a preexisting VH. In the present case, spinal cord compression was most severe at the C7 Level. Additionally, a hemangioma was found in the C7 vertebral body, suggesting a possible relationship between spinal IPEH and VH. Therefore, the mechanism behind IPEH could be an excessive reaction to the normal thrombus reorganization process. However, it is difficult to make conclusions based on the few cases. Future, well-powered studies on the relationship between VH and IPEH in the spinal canal are needed.

Preoperative diagnosis of spinal IPEH is challenging because of its non-specific MRI features and the need to differentiate IPEH from arteriovenous malformations, schwannomas, or neurofibromas via imaging technology. Reported cases of spinal IPEH mostly exhibited isointensity or low signal intensity on T1WI and high or variable signal intensity on T2WI with contrast enhancement. Three cases presented as dumbbell-shaped masses, mimicking schwannoma[6]. The present patient was preoperatively diagnosed with epidural schwannoma, which typically features papillary proliferation of vascular endothelial cells, localized intravascularly, with normal thrombus formation in the entire papillary tissue[4,23,26]. The pathological findings in our case are consistent with a diagnosis of IPEH. However, IPEH must be distinguished from other benign and malignant lesions, including cavernous/capillary hemangioma, Kaposi sarcoma, endovascular papillary, and angioendothelioma. Importantly, IPEH should be differentiated from angiosarcoma to avoid unnecessary radiation and surgery[11].

Spinal manifestations of IPEH may be associated with chest or back pain, lower limb numbness, paralysis, and bladder dysfunction caused by spinal cord or cauda equina compression[6]. Treatment is only considered when pain or compression-related symptoms occur, and complete surgical resection is the preferred treatment. Prognosis after complete resection is good, with minimal recurrence. Nine of the 11 patients in the reported cases underwent radical resection, and no recurrence was noted during follow-up. Further, the patient in the present case — who presented with acute-onset numbness and weakness of the limbs owing to spinal cord compression — underwent complete surgical resection. His symptoms were relieved and had not recurred by the 6-mo follow-up visit. Adjuvant radiotherapy can be considered for lesions that cannot be completely removed or that are recurrent. To our knowledge, there is only one reported case of radiotherapy for incompletely resected spinal IPEH. This case showed the potential benefit of radiation following the recurrence of benign IPEH in a patient with epidural disease[21].

The main pathological change attributable to IPEH is benign vascular endothelial papillary hyperplasia with thrombosis; however, the mechanism of this relationship remains controversial. Spinal IPEH is rare, occurring more frequently in men, and is localized to the thoracic spine. Importantly, our findings suggest that spinal IPEH is related to VH. There are no prior reports of IPEH in the cervical spinal canal. To our knowledge, this is the first case of IPEH in the cervicothoracic spinal canal which was associated with a favorable outcome after complete resection.

The authors wish to thank the patient for his contributions to this report.