Schwannoma of the pancreas is extremely rare. We report a case of pancreatic schwannoma that was difficult to distinguish from pancreatic carcinoma before surgery.

A 66-year-old male underwent a right-lobe hepatectomy for hepatocellular carcinoma. Post-surgical computed tomography showed a 10 mm long solid mass with ischemia, with no expansion into the main pancreatic duct. Upon magnetic resonance cholangiopancreatography, the tumor had high signal intensity in diffusion weighted images, consistent with pancreatic carcinoma. Endoscopic ultrasound (EUS) was performed to obtain more information about the tumor, and showed a 14 mm solid and hypoechoic mass in the pancreatic body. Contrast enhanced EUS revealed that the tumor showed a hyperechoic mass in the early phase, and the contrasting effect continuation was very short; findings also consistent with pancreatic carcinoma. Thus, we preoperatively diagnosed his condition as a pancreatic carcinoma and performed distal pancreatectomy with splenectomy. Microscopic examination showed that the tumor was in fact a benign schwannoma. Histology showed a proliferation of spindle-shaped cell in a vague fascicular and haphazard pattern, with palisading arrangement.

Schwannoma of the pancreas is very rare, however, clinicians should consider schwannoma as the differential diagnosis for pancreatic tumors.

Core Tip: Schwannoma of the pancreas is extremely rare, with 68 cases reported in the literature. On the other hand, preoperative diagnosis of schwannomas can be difficult, as schwannomas have no specific imaging findings, thus the preoperative diagnosis is not easy to confirm. We have experienced a case of schwannoma in pancreatic body mimicking pancreatic carcinoma, and performed surgical treatment. Clinicians should consider nonepithelial tumors as a part of the differential diagnosis for pancreatic tumors despite their low frequency.

Herein, we present a review of the literature and a novel case of a pancreatic schwannoma that was initially diagnosed as a pancreatic carcinoma, in a patient who underwent a distal pancreatectomy with splenectomy.

A 66-year-old male who was followed-up after right lobe hepatectomy for hepatocellular carcinoma (pT2N0M0 stage II) secondary to a hepatitis B infection for ten years and six months. He was found pancreatic tumor accidentally in ultrasonography on a health examination.

Ultrasonography revealed a 10 mm tumor in the pancreas.

The patient had a history of right lobe hepatectomy for S5/6 hepatocellular (pathological stage: PT2N0M0 stage II carcinoma ten years and six months ago, and followed up for five years after hepatectomy.

There is no history of his family.

He had no physical abnormity, general condition was almost good.

Computed tomography (CT) showed a 10 mm tumor with low density in the early phase (Figure 1A) and isodensity with pancreatic parenchyma in the late phase (Figure 1B). There was no expansion into the main pancreatic duct, and no swollen lymph nodes. Magnetic resonance cholangiopancreatography (MRI) revealed a 9 mm tumor in the pancreatic body. The tumor showed low intensity in T1-weighted images (Figure 2A) and showed slightly higher intensity in T2-weighted images (Figure 2B). The tumor also demonstrated high signal in diffusion weighted images (Figure 2C) and almost the same isodensity in an apparent diffusion coefficient-map phase (Figure 2D). Endoscopic ultrasound (EUS) was performed to obtain more information about the tumor. EUS images showed a 14 mm solid and low echoic mass in the pancreatic body (Figure 3A), EUS elastography showed a strain ratio < 0.05 (Figure 3B), and contrast enhanced EUS showed short term contrast effects in the early phase that washed out quickly (Figure 3C). 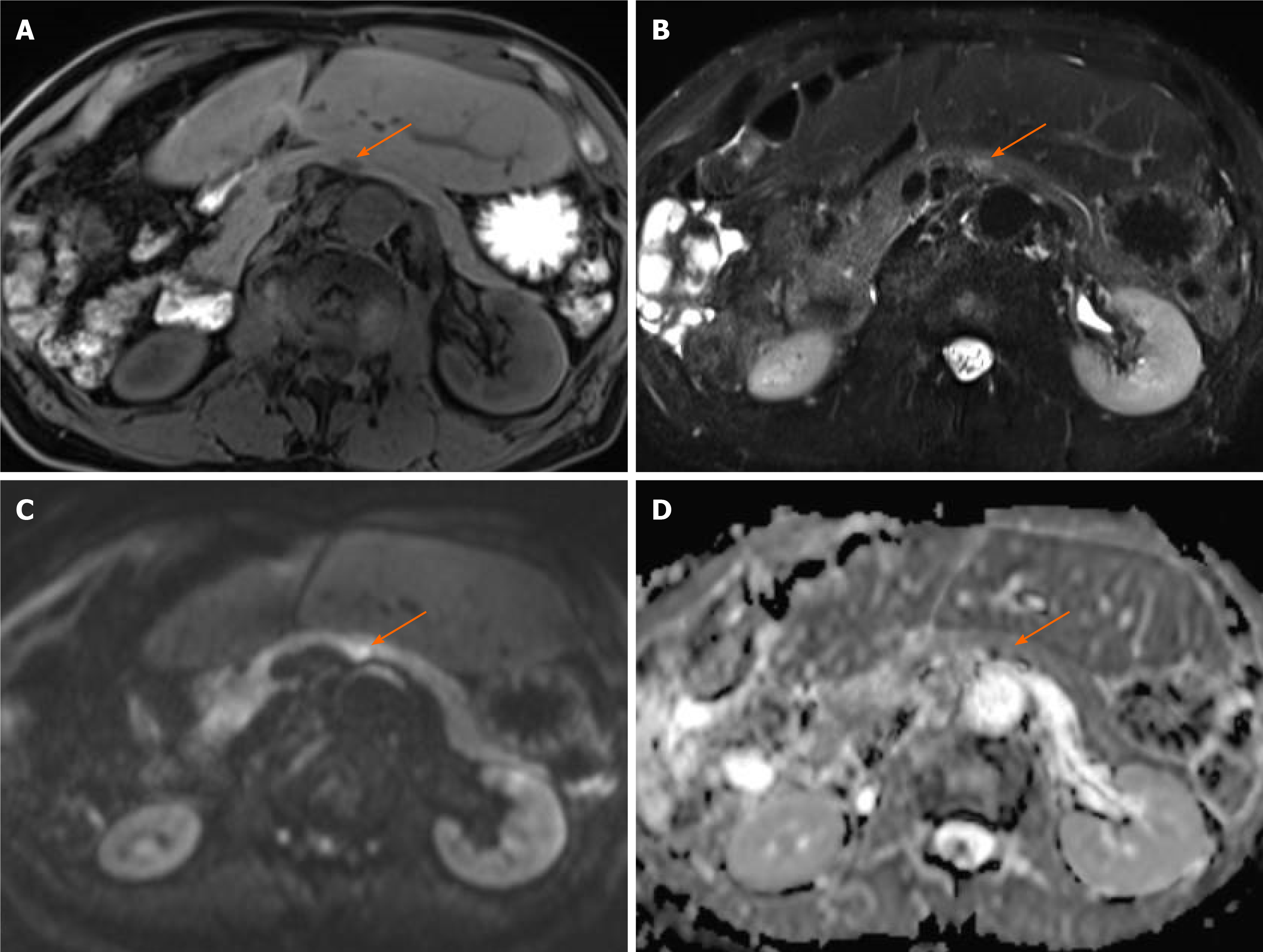 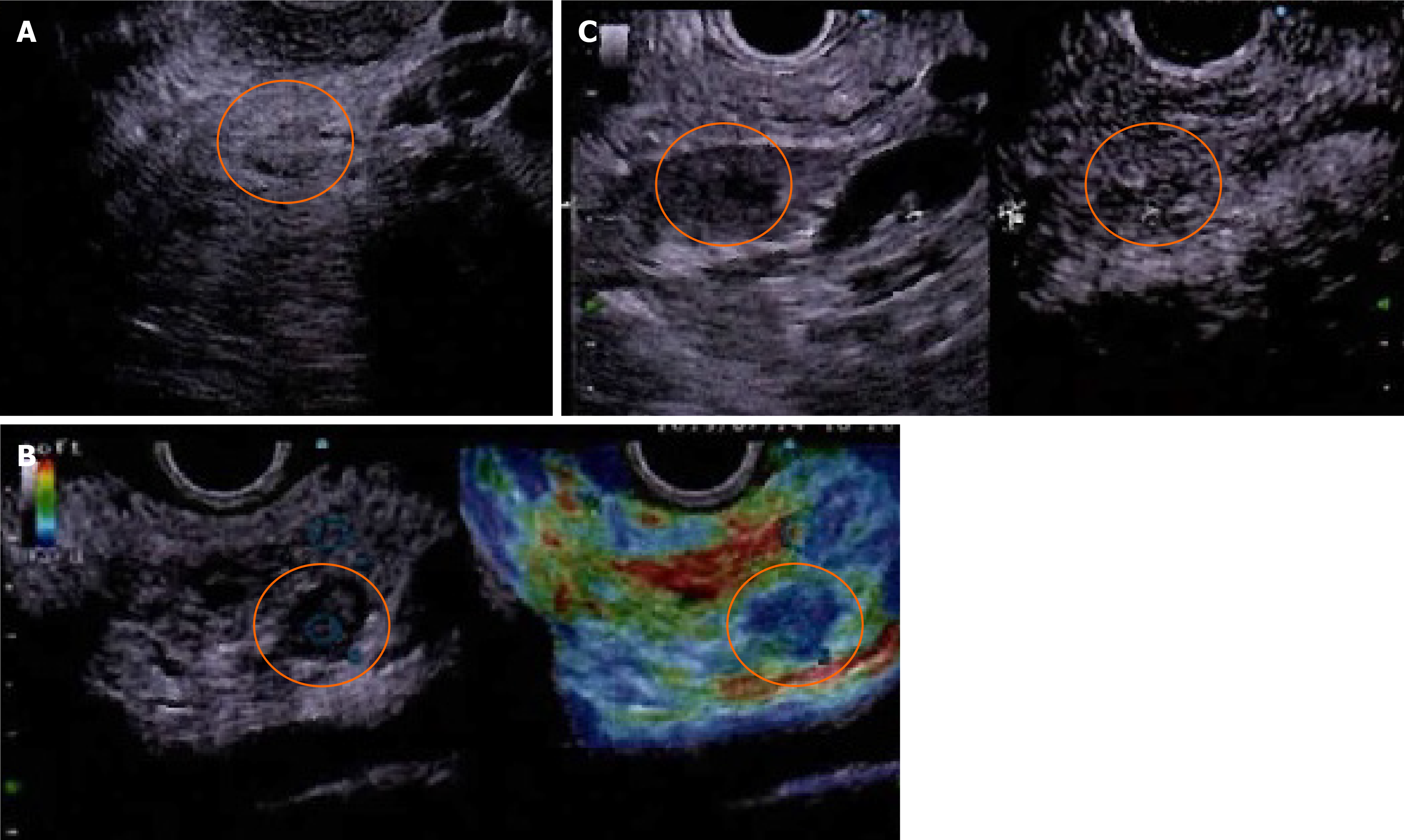 The patient was diagnosed with pancreatic carcinoma.

Histopathologic examination after surgery showed a proliferation of spindle-shaped cells in a vague fascicular and haphazard pattern, with palisading arrangement (Figure 5A and B). Mitotic figures were not evident. These features were consistent with schwannoma, not pancreatic carcinoma. There was in fact no evidence of malignancy. Immunohistochemical staining of S100 was positive (Figure 5C and D), and AE1/AE3, spinal muscular atrophy (SMA), and CD34 were all negative. There was no lymph node metastasis. As a result, the final diagnosis of the tumor proved to be a pancreatic schwannoma (11 mm × 8 mm). Although the patient developed a grade B pancreatic fistula after surgery, this was resolved by conservative treatment. 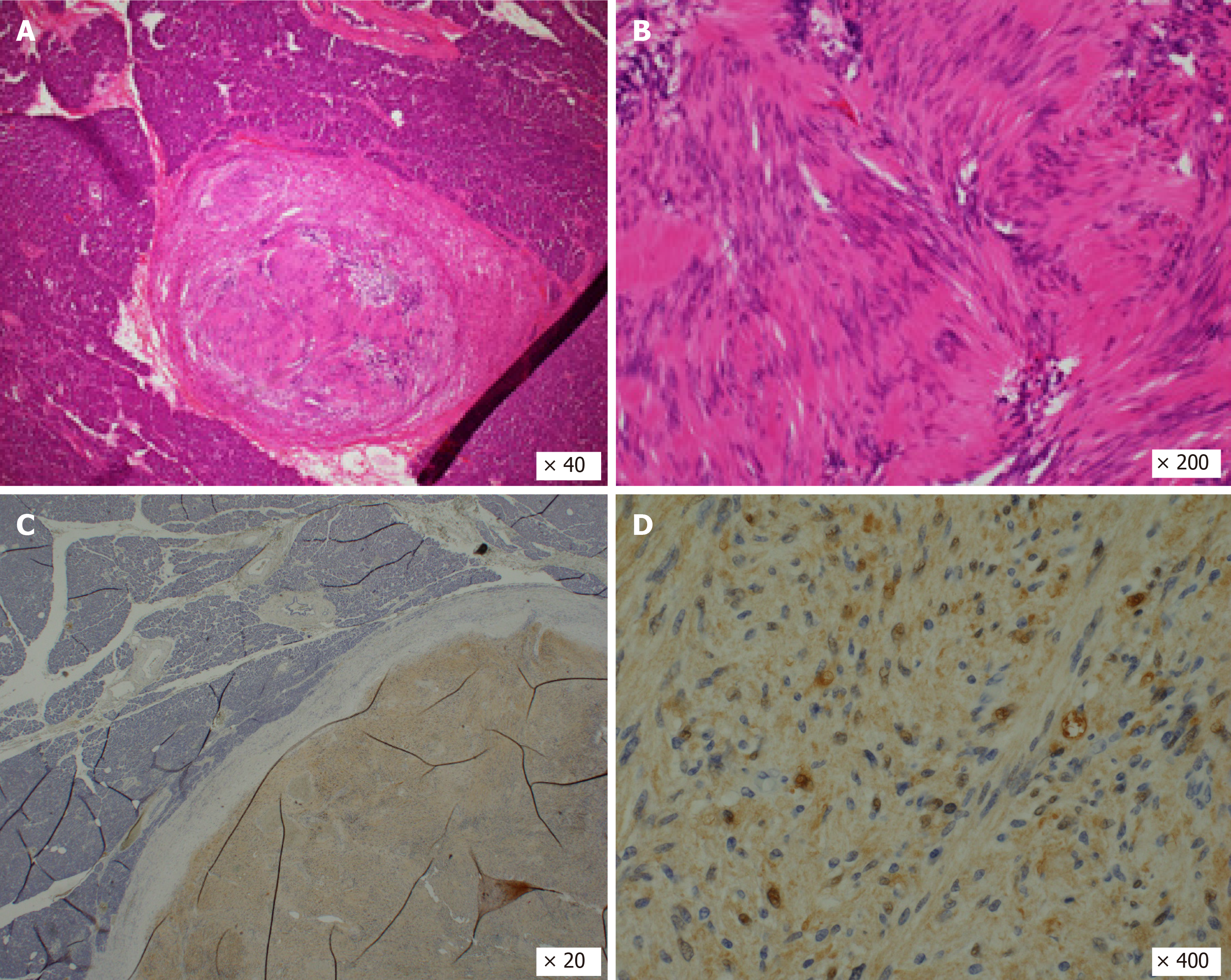 Figure 5 Microscopic histopathological findings. A and B: Hematoxylin and eosin staining showed a proliferation of spindle-shaped cells in a vague fascicular and haphazard pattern, with palisading arrangement; C and D: Immunohistochemical staining of S100 was positive.
DISCUSSION

We present a patient with a pancreatic schwannoma who underwent a distal pancreatectomy and splenectomy with a working diagnosis of pancreatic carcinoma. In the abdominal cavity, the retroperitoneum and stomach are the most frequently involved sites for schwannomas. On the other hand, other intraperitoneal organ schwannomas have been previously reported, such as in the gallbladder[7] and intrahepatic duodenal ligament[8]. To the best of our knowledge, less than 70 cases of schwannomas in the pancreas have been reported[3]. Schwannomas are histopathologically composed of spindle cells in a nuclear palisade arrangement and Verocay body formation[9]. Immunohistochemically, schwannomas are positive for S-100, and negative for desmin, smooth muscle myosin, SMA, CD34 and CD117[4]. Immunohistochemical examination in our case showed that S-100 was positive and the other markers were negative.

Preoperative diagnosis of schwannomas can be difficult, as schwannomas have no specific imaging findings, thus the preoperative diagnosis is not easy to confirm. Several imaging modalities such as ultrasonography, CT, MRI, and EUS may be useful in diagnosing. Contrast enhanced CT shows well-defined hypodense lesions with encapsulation and/or cystic degeneration[8], and MRI shows hypointensity on T1-weighted images and lack of homogeneity and hyperintensity on T2-weighted images[10]. Crinò et al[11] reported that EUS is useful to diagnose pancreatic schwannoma. They also reported that contrast enhanced EUS can help achieve the diagnosis[11]. It has been reported that degenerative changes are found in almost 70% of schwannomas in pancreas[4]. Degenerative changes lead to the presence of obvious variety in the appearance and size of the tumors. Schwannomas are capsulated tumors that, at imaging, are generally round or oval and show well-defined margins. Histologically, schwannomas are comprised of two areas: Antoni A, characterized by packed spindle cells and a vascular component, and Antoni B, characterized by hypocellularity and occupied by loose stroma. The latter area may be the subject of degenerative changes, such as cyst formation, hemorrhage, necrosis, and calcification. Pancreatic schwannomas may mimic other, more common pancreatic lesions. Therefore, pancreatic schwannomas have a very high rate of misdiagnosis. In this case, imaging findings of contrast enhanced CT and MRI did not conflict with the above standard findings; however, imaging findings from EUS were consistent with pancreatic carcinoma. We compared the histology of the tumor to leiomyoma and a gastrointestinal stromal tumor. However, immunohistochemical staining of SMA was negative, and S100 was positive. These findings contradicted those tumors.

Most pancreatic schwannomas are benign, however there are some reports that show malignant transformation[4,12]. Some researchers have attempted to correlate the characteristics of the schwannomas on imaging examination with its malignant potential. Ma et al[3] suggested that larger tumors correlated with greater malignant potential. The management of schwannomas in pancreas should be decided by location and histological findings. Most pancreatic schwannomas are benign and malignant transformation is extremely rare. As such, enucleation is often the first-line procedure if tumor pathology is confirmed pre-operation. In cases of large tumors expressing malignant behavior, such as malignancy in frozen sections or invasion to major vessels, an oncological resection is recommended.