Immune checkpoint inhibitors (ICIs) can lead to immune-related hepatitis (IRH) and severe liver damage, which is life-threatening in the absence of specific treatment.

A 75-year-old man was admitted to our hospital complaining of loss of appetite, yellow urine, and abnormal liver function for the past 2 wk. Three months prior to admission, he was treated with two rounds of capecitabine in combination with camrelizumab for lymph node metastasis of esophageal cancer. Although liver function was normal before treatment, abnormal liver function appeared at week 5. Capecitabine and camrelizumab were discontinued. Ursodeoxycholic acid and methylprednisolone 40 mg daily were administered. Liver function continued to deteriorate. Prothrombin time and international normalized ratio were 19 s and 1.8, respectively. The patient was diagnosed with acute liver failure. A pathological analysis of liver biopsy indicated a strongly positive immunohistochemical staining of T8+ cells, thereby suggesting that drug-induced liver injury was related to IRH caused by camrelizumab. Subsequently, we performed sequential dual-molecule plasma adsorption system (DPMAS) treatment with plasma exchange (PE). After two rounds of treatment, the patient's appetite significantly improved, the yellow color of urine reduced, and liver function improved (total bilirubin level decreased) after five rounds of treatment. Liver function normalized 4 wk after discharge.

The use of sequential DPMAS with PE can reduce liver injury and systemic toxic reactions by clearing inflammatory mediators and harmful substances from blood, and regulate immune cell activity, which may be effective in the treatment of severe ICI-induced IRH.

Core Tip: Immune checkpoint inhibitors can lead to immune-associated hepatitis and severe liver damage that can be life-threatening without specific treatment. Corticosteroids and immunosuppressants do not show sufficient sensitivity and their use often leads to serious complications such as severe secondary infections. Here we report a case of severe liver damage caused by death protein 1 inhibitors and the first use of dual-molecule plasma adsorption combined with plasma exchange to achieve satisfactory results. In addition, the clinical biochemical indicators in this case were sufficient for diagnosing acute liver failure, while pathology provided an accurate diagnosis. Pathological diagnosis is a very important diagnostic tool for severe liver injury.

Immune checkpoint inhibitors (ICIs) target programmed cell death protein 1 (PD-1)/programmed cell death protein ligand 1 (PD-L1); cytotoxic T lymphocyte-associated antigen 4 (CTLA-4) monoclonal antibodies can enhance the anti-tumor immune response in the human body by blocking the inhibitory immunoregulation of the above-mentioned immune checkpoint pathway[1]. Since tumor and normal cells have similar antigens, an activated immune system can simultaneously kill the tumor and attack normal human tissues, causing immune-related adverse reactions in various systems of the body[2,3]. Immune-related adverse events (irAEs) can affect all organs[4]. ICI-related hepatitis (IRH) is a common irAE[5]. When the degree of liver injury is grade 1 or 2, most of them can relieve themselves[6]. Since corticosteroids and immunosuppressant treatment are difficult to achieve good curative effect in grades 3 and 4 liver injury, deaths are common[7]. We report a case wherein the first use of dual-molecule plasma adsorption system (DPMAS) combined with plasma exchange (PE) achieved satisfactory results in a patient with severe liver damage caused by PD-1 inhibitors.

A 75-year-old man with esophageal cancer was admitted to the hospital 1 year after surgery.

The patient presented with a 2 wk history of loss of appetite, yellow urine, and abnormal liver function. Three months prior, due to lymph node metastasis of esophageal cancer, the patient was placed on capecitabine (1.5 g) twice daily for 2 consecutive weeks, followed by a 1 wk interval, combined with 200 mg of camrelizumab (PD-1 inhibitor) twice every 2 wk.

There was no family history of viral hepatitis; no history of alcohol abuse, blood transfusion, use of blood products, or schistosomiasis; and no recent history of an unclean diet.

Physical examination revealed the following: Blood pressure, 122/82 mmHg; heart rate, 67 beats/min; respiratory rate, 18 breaths/min; and body temperature, 36.5 °C. His skin was dark and dull, and yellowing of the skin and sclera was observed.

Other findings included: There was no palmar erythema, no spider nevi, and no obvious abnormal findings during cardiopulmonary auscultation; the abdomen was soft, non-distended, and non-tender; and there was no rebound tenderness. Mobility dullness was negative, and no edema was noted on either leg.

Liver function, monitored weekly, was normal in the first 4 wk and abnormal in the fifth week. The capecitabine and camrelizumab were discontinued; however, the patient’s liver function continued to deteriorate (Figure 1). The patient had no history of hepatitis A-E or alcoholism; analyses for Epstein-Barr, cytomegalovirus, and antinuclear and mitochondrial antibodies were negative. 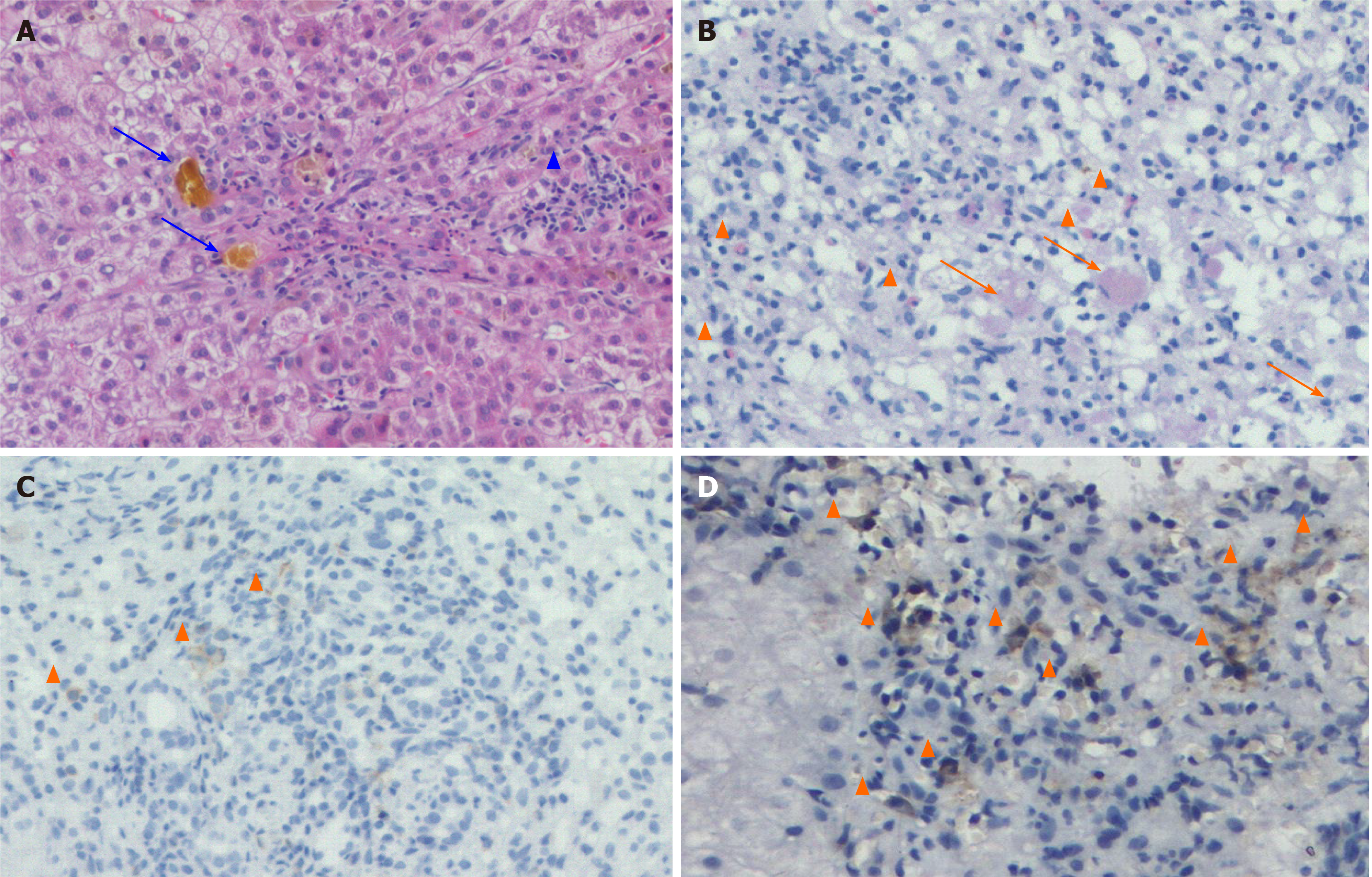 The patient was administered ursodeoxycholic acid (UDCA) and methylprednisolone (MP) 40 mg daily. His alanine aminotransferase (ALT) and aspartate aminotransferase (AST) levels decreased; however, his serum total bilirubin (TBIL), alkaline phosphatase (ALP), and glutamine transpeptidase (GGT) levels increased further (Figure 1). The prothrombin time was 19 s and the international normalized ratio was 1.8. The patient exhibited a poor clinical response to corticosteroids; therefore, the treatment was stopped after 10 d. He was placed on DPMAS and sequential PE every 2-3 d. The treatment method was as follows: Femoral vein puncture was performed, bleeding fluid was drained through the plasma separator to separate blood cells and plasma, and the anion bilirubin adsorption column (Zhuhai Jianfan, China; BS330) and HA-type resin hemoperfusion device (Zhuhai Jianfan, China; HA330-II) were used for plasma adsorption; the plasma treatment volume was 6500 (operation procedure, Figure 3). At the end of the DPMAS cycle, the plasma in the adsorption column was recovered using a single blood pump, while the plasma separator was left to continue the PE. The exchange volume was 1500 mL.

The incidences of IRH caused by CTLA-4 and PD-1/PD-L1 inhibitors are less than 10% and approximately 5%, respectively[8,9]. Its incidence with combined CTLA-4 inhibitor use is as high as 33%, and grade 3-4 liver injury accounted for approximately 14%[10,11]. IRH often develops more than 1-3 mo after administration, but it can appear at any time. The incidence of IRH was higher in hepatocellular carcinoma patients treated with two kinds of ICIs and CTLA-4 inhibitor combined with chemotherapy/targeted therapy than in those treated with PD-1 inhibitor alone[12].

The main clinical manifestations of liver injury associated with ICI include asymptomatic ALT and/or AST elevations, with or without TBIL elevation; moreover, some patients present with symptoms such as fever, fatigue, jaundice, and fullness. Most patients with mild hepatitis present normal imaging findings; furthermore, patients with moderate to severe hepatitis have non-specific manifestations such as hepatomegaly, periportal edema, and periportal lymphadenopathy. Common pathological features include lobular hepatitis, central inflammation, and necrosis; portal lesions are often mild[13,14]. CTLA-4 inhibitors cause similar CD4+ and CD8+ T cell infiltrations in liver tissue[15], and PD-1/PD-L1 inhibitors mainly lead to CD8+ T cell infiltration[16,17]. In this case report, we also showed strong CD8+ T cell positivity in liver tissue. Bile duct injury is also a common pathological manifestation, especially in patients with cholestasis and high jaundice[18]. We recently found the case of a patient with bile duct deficiency (unpublished). Some scholars have reported the existence of specific granulomas[18], such as fibrotic granulomas, but only in case reports[19,20].

In order to diagnose ICI-related hepatitis, it is necessary to exclude active viral hepatitis, alcoholic hepatitis, autoimmune hepatitis, thromboembolic events, metastatic disease progression, and other liver diseases, and to investigate the effect of the combination of drugs (such as acetaminophen, antibiotics, and chemotherapy drugs). In this case, we used capecitabine and camrelizumab simultaneously, and therefore it was difficult to determine whether IRH was caused by capecitabine. After liver function is repaired, there is no abnormal liver function after using capecitabine again. The Roussel Uclaf causality assessment method was used to score[21]. The total score of 1 (time to onset + 2; course, 0; risk factors, + 1; concomitant drug, - 1; search for non-drug cases, + 1; previous information on drug hepatotoxicity, 0; response to drug readministration, - 2) also excluded the correlation between liver injury occurrence and capecitabine use.

ICI-associated cholestatic hepatitis (mainly bilirubin, with ALP and gamma GGT levels elevation) has also been reported, and may be corticosteroid-resistant, with a poor prognosis[25]. However, abdominal ultrasound or MRCP is needed to exclude biliary obstruction factors. In a study of 387 patients from Japan who underwent ICI treatment, 56 developed corticotropin releasing hormone, 11 (19.6%) of the hepatocellular type and 34 (60.7%) of the cholestasis type, with cholestasis predominating[26]. Liver biopsy is helpful in diagnosing and evaluating the severity of hepatitis and guiding individualized treatment, which is necessary in complex, severe, and refractory cases. Although MP (40 mg/d) was administered to this patient in the rising stage of jaundice, ALT and AST levels decreased while ALP, GGT, and TBIL levels increased instead of decreasing. Obviously, it is resistant to corticosteroids. Liver biopsy showed that, in addition to extensive lobular inflammation, there was bile duct injury and severe cholestasis. No massive or submassive necrosis was found, and acute liver failure was not diagnosed, which was consistent with the pathological manifestations of cholestatic hepatitis.

Blood adsorption technology is a type of blood purification method that uses different adsorbents to remove endogenous or exogenous poisons in blood[27]. In order to reduce adsorbent-induced blood cell damage, plasma separation technology can be combined with it to adsorb the separated plasma, namely, plasma adsorption. DPMAS can improve hyperbilirubinemia, clear inflammatory factors, reduce inflammatory response syndrome, block the occurrence and development of liver failure, and significantly improve the prognosis of liver failure[28,29]. DPMAS can process more than 6000 mL of plasma at one time. We previously used DPMAS and sequential PE for the treatment of thyroid crisis and severe liver injury[30]. Moreover, we used DPMAS to treat a patient with severe ICI-related liver injury. The patient's liver function improved for a while. However, due to long-term corticosteroid and multimode fiber (MMF) treatment, severe secondary infection and septic shock occurred, and the patient finally died of multiple organ failure. Nevertheless, it can be seen that this combination can conveniently repair liver injury with severe cholestasis.

A previous study reported that a 76-year-old patient with malignant melanoma developed liver function deterioration (abnormal TBIL and ALP levels) after using ipilimumab (anti-CTLA-4). Corticosteroids (2 mg/kg/d) and MMF (1.5 g/d) did not prevent the progression of liver failure. Finally, the patient was treated with PE for five times, and the corticosteroids and MMF were simultaneously reduced. DPMAS combined with PE has a curative effect on ICI-related liver injury because it can remove inflammatory factors, bilirubin, creatinine, and other small molecular substances from blood[31]. Other possible mechanisms include changes in lymphocyte proliferation and function, which may render lymphocytes sensitive to immunosuppressants and chemotherapy drugs, as well as changes in the immune system, including changes in the number and activation of B and T cells, the enhancement of T-suppressive function, and changes in the ratio of helper T cell type 1/2 (Th1/Th2)[32]. The changes in the number and function of these immunocompetent cells reduce the severity of ICI-related liver injury.