Pulmonary alveolar proteinosis (PAP) is a rare lung disease characterized by the accumulation of phospholipoproteinaceous material in the alveoli. Cases of PAP complicated with tuberculosis are much more complex and have rarely been well recorded.

We describe a 21-year-old Han Chinese patient with suspicious lung infection associated with mild restrictive ventilatory dysfunction and diffusion reduction. High resolution computed tomography revealed a “crazy-paving” appearance and multiple pulmonary miliary nodules around the bronchi. Bronchoalveolar lavage demonstrated a small amount of periodic acid-Schiff positive proteinaceous materials. A serological test for the presence of a Mycobacterium tuberculosis antibody and an interferon-gamma release assay were both positive. The patient received a standard course of first-line anti-tuberculosis treatment after diagnostic bronchoalveolar lavage. To date, clinical remission has been achieved and maintained for five years.

Pulmonary alveolar proteinosis (PAP) is an unusual diffuse lung disease characterized by the accumulation of large amounts of periodic acid-Schiff (PAS) positive phospholipoproteinaceous material in the alveoli, and the prevalence of PAP is approximately seven cases per million population[1]. The major symptoms of PAP are progressive dyspnea, cough, fatigue, weight loss, and low-grade fever, all of which may also occur in tuberculosis. However, when PAP is complicated with tuberculosis, it is much more complex and has rarely been well recorded. Here, we present a successfully diagnosed and treated case of PAP with tuberculosis and review the main characteristics of other previously reported cases of PAP complicated with tuberculosis to obtain a better understanding of this situation.

The patient was a 21-year-old Han Chinese man. He had no history of smoking, but he suffered from a nonproductive cough for 2 mo, accompanied by a low-grade fever (ranging from 37.4-37.8 ℃) and night sweats; however, he denied hemoptysis, chills, weight loss, dyspnea, and other symptoms. Then he developed paroxysmal chest stabbing pain for 1 wk.

The patient had no known history of a past illness.

The patient had no known personal and family history.

Physical examination showed normal auscultation of both lungs, oxygen saturation of 98%, blood pressure of 126/75 mmHg, a temperature of 36.5 ℃, respiratory rate of 20 times per minute, and pulse of 88 beats per minute. He had no clubbing, a pale complexion, or cyanosis.

Computerized tomography of the chest demonstrated increased lung texture and multiple patchy enhanced densities of both lungs, especially in the upper lobes, with no obvious adhesion to the pleurae. There were no abnormities in the bronchi under the broncho fiberscope. 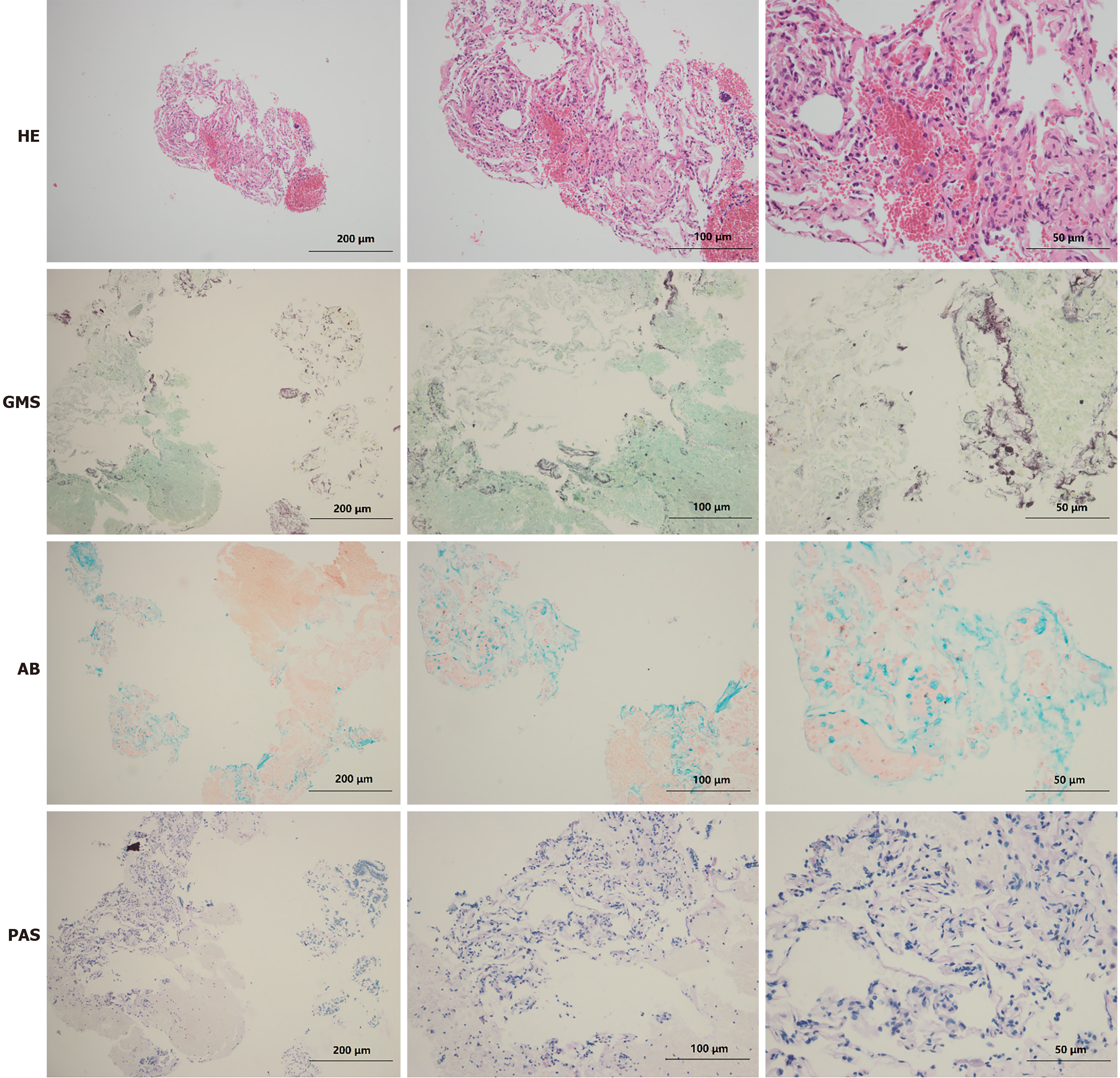 Initially, the patient was diagnosed with a pulmonary infection and was treated with azithromycin (0.5 g, intravenous, once a day) and doxycycline (0.2 g, oral, once a day), after which his cough was reduced, but the shadows of the lungs remained the same. Then, we revised the diagnosis to PAP complicated with tuberculosis. The patient received standard anti-tuberculosis treatment for 6 mo (isoniazid, rifampicin, pyrazinamide, and ethambutol treatment for 2 mo, followed by isoniazid and rifampicin treatment for 4 mo).

As expected, all symptoms disappeared and the lesions of both lungs were significantly absorbed with a normal density demonstrated on HRCT (Figure 1) after 6 mo of anti-tuberculosis treatment. The patient has been followed up for 5 years, during which a clinical remission has been achieved and maintained. And the patient needs to visit the doctor if any symptom occurs again.

According to the pathogenesis and clinical features, PAP is divided into three categories: congenital, secondary, and idiopathic. Congenital PAP mainly occurs in infants and is caused by mutations in surfactant proteins (SP) and granulocyte-macrophage colony-stimulating factor (GM-CSF) receptor genes. Secondary PAP is associated with various underlying diseases, such as hematological malignancies, infections, and other diseases that cause severely low immune function or is associated with the inhalation of inorganic minerals or chemicals[2]. Approximately 90% of PAP cases are idiopathic, also known as autoimmune PAP, which is associated with the presence of anti-GM-CSF autoantibodies[3,4]. Of note, recent discoveries have suggested that there is an overlap between secondary PAP and idiopathic PAP, and impairments in the GM-CSF production pathway result in the majority of PAP cases[5,6].

With an insidious onset, the course of PAP lasts months to years. The clinical manifestations of PAP vary and are nonspecific, among which progressive dyspnea and nonproductive cough are the most common symptoms. Approximately one-third of patients are asymptomatic at presentation, while the majority present acutely with rapid progression to respiratory failure[7]. Physical examination often shows normal vital signs, although clubbing, cyanosis, and inspiratory crackles have been reported in individual cases. Typical lung dysfunction is restrictive ventilation dysfunction and diffuse dysfunction, and the imaging change is a “crazy-paving” pattern[8]. Although the “crazy-paving” pattern has been well-accepted to be associated with PAP, it is neither specific nor sensitive to diagnose PAP because several other diseases also have the same signs[9].

Notably, there are clear associations between PAP and tuberculosis. GM-CSF is critical for regulating alveolar macrophage function and maintaining homeostasis, by binding with macrophage surface receptors and then mediating signal transduction, macrophage terminal differentiation, intracellular lipid metabolism, surfactant catabolism, and pathogenic receptor expression[10]. Recent discoveries have suggested that individuals with deficient GM-CSF subsequently experience alveolar macrophage dysfunction and reduced elimination of both endogenous SP and exogenous M. tuberculosis; thus, these patients are susceptible to PAP and tuberculosis[11]. In PAP cases, gene mutation or GM-CSF antibodies lead to macrophage dysfunction and an imbalance in surfactants. Increases in SP-A and SP-D, on the one hand, promote macrophages to engulf M. tuberculosis and, on the other hand, they compromise the function of macrophages[12]. In contrast, tuberculosis may also be the primary event, stimulating type II pneumocytes to secrete excess surfactant, thus triggering the development of PAP[13]. In the present case, PAP and tuberculosis were found at the same time, so it is difficult to tell whether tuberculosis was involved as a superinfection of PAP or whether the PAP was secondary to the tuberculosis.

Tuberculosis may increase the risk of developing PAP, and PAP patients may also develop secondary tuberculosis. There are common symptoms of PAP and tuberculosis, which will lead to a missed diagnosis or misdiagnosis. However, cases of PAP complicated with tuberculosis have rarely been well recorded (Table 2)[13-23]. Empirically, we need to be vigilant about the following signals in PAP patients, which indicate the presence of tuberculosis infection. First, the patient suffers from symptoms such as hemoptysis, fever, or night sweats, which are common in tuberculosis but infrequent in PAP. Second, chest radiography shows nodules, fibrous stripes, or consolidation, which are hard to explain in PAP. Third, the pulmonary function test reveals obstructive ventilation dysfunction. Last, the PPD skin test is strongly positive, or the pulmonary lesions are absorbed after anti-tuberculosis treatment.

The standard therapy for idiopathic PAP is therapeutic alveolar lavage, covering bronchoalveolar lavage and whole lung lavage. The basic theory underlying alveolar lavage is the reactivation of alveolar macrophages through mechanical clearance of deposited lipids, proteins, and materials. In addition, systemic replacement therapy based on exogenous GM-CSF has been investigated and even used as an alternative to alveolar lavage[24]. Depleting B lymphocytes by rituximab and plasmapheresis are two new approaches to reduce the number of GM-CSF autoantibodies, which offers another promising way to cure those who are unsuccessfully treated by alveolar lavage and exogenous GM-CSF[25].