Cor triatriatum sinistrum or cor triatriatum sinister is a rare congenital heart disease that accounts for approximately 0.1% of all cardiac abnormalities. It is defined as the presence of an anomalous septum that divides the left atrium into two cavities, and in most cases, it can be asymptomatic or less frequently very severe.

A 37-year-old pregnant woman visited our hospital. In the first trimester scan, we detected signs of fluid in the pericardium (pericardial effusion) that reached the atriums. In the third trimester, an anomalous septum in the left atrium suspicious of cor triatriatum sinister was detected. Expectant management was decided, the pregnancy evolved normally and resulted in uncomplicated delivery of a healthy child. The findings in the prenatal scan were confirmed by echocardiography and the diagnosis of cor triatriatum sinister was confirmed. The newborn was asymptomatic at all times.

We show expectant management of cor triatriatum sinister and suggest an association between this entity and early pericardial effusion.

Cor triatriatum sinister is defined as the presence of an abnormal septum that divides the entire left atrium into two cavities. It is a rare congenital heart disease that represents approximately 0.1% of all cardiac abnormalities[1]; the right variant cor triatriatum dexter is less frequent[2]. Early pericardial effusion during the first trimester can be observed in an isolated form in up to 2% pregnancies. Furthermore, it has a good prognosis in most cases, although it is associated with certain pathologies such as specific congenital heart defects or chromosomal abnormalities[3].

A 37-year-old female came to our hospital for a routine pregnancy check-up.

The patient was in the 12th wk of pregnancy.

The patient had no significant pathological history, and she was in her second pregnancy and with prior vaginal delivery. She had no relatives with cardiac disease or any malformations. Her first daughter was healthy.

The patient had no significant personal nor family history.

Patient´s physical examination did not show any abnormality. She was a healthy pregnant woman.

The first trimester aneuploidy screening was 1/518 for trisomy 21 and 1/10000 for trisomy 13 and 18. The cell-free fetal DNA test was performed due to the intermediate risk for trisomy 21 and the echographic findings suggestive of heart disease. It resulted in a risk for trisomy 21, 13, and 18 less than 1/10000, and male gender. The serologies were negative for human immunodeficiency virus, syphilis, hepatitis B, and toxoplasma, and the patient was immune to rubella. Her blood group was rhesus factor-positive and irregular antibody count was negative. No thyroid or glycemic changes were observed during the follow-up of this pregnancy.

The first trimester ultrasound was performed, wherein a live fetus of 55 mm craniocaudal length was observed. Echocardiography revealed a pericardial effusion that reached the atrioventricular valves (Figure 1) in the heart with synchronous ventricular contractions, patent atrioventricular valves, and no ventricular asymmetry. Similarly, the outflow tracts of the great arteries were observed with correct arrangement, with preserved crossing. No abnormalities were observed at any other level. 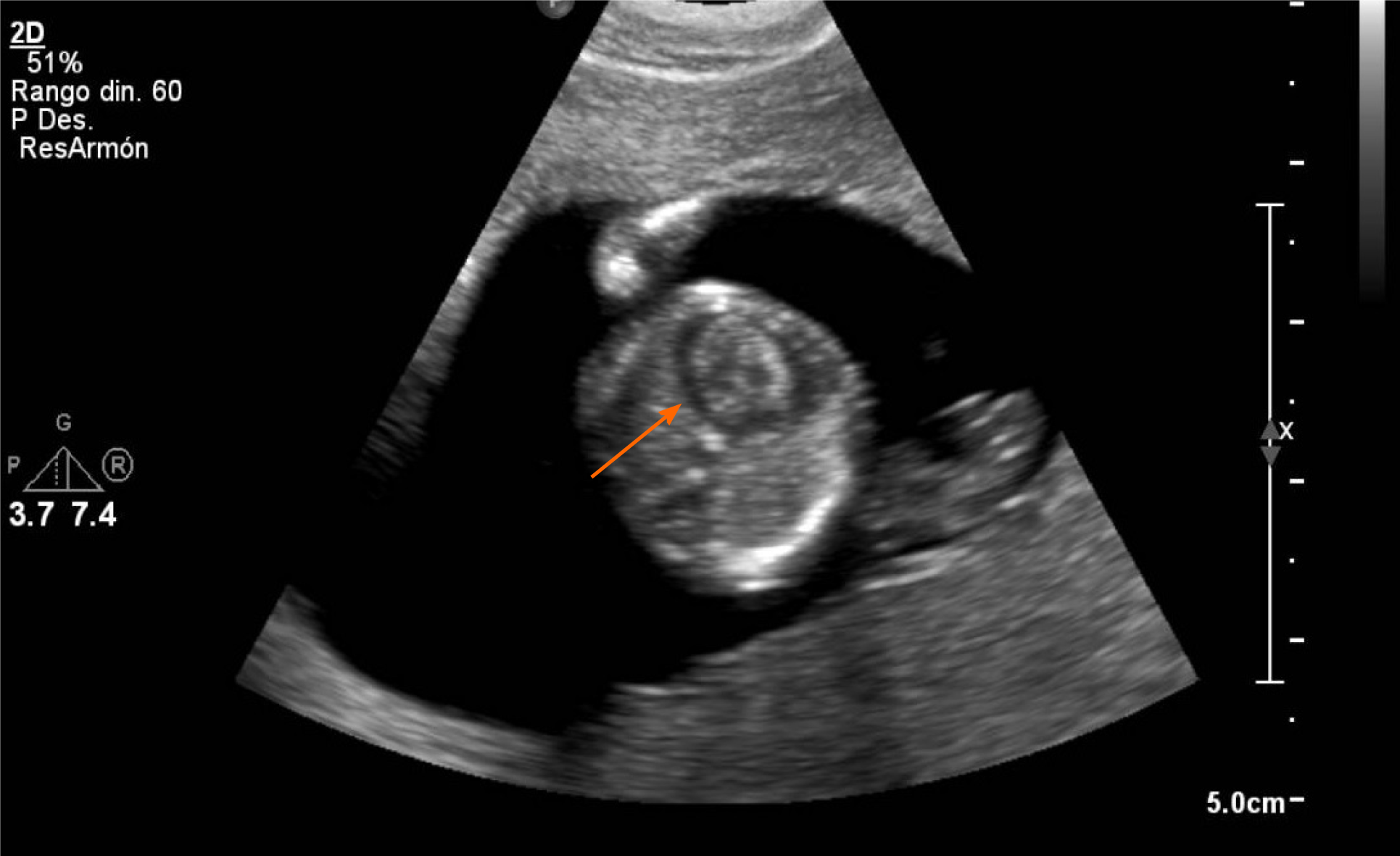 Figure 1 First trimester findings. Pericardial effusion at week 12 of gestation appears as a hypoechogenic line that surrounds the entire heart (arrow) up to the atria.

Echocardiography was performed at week 28 of gestation (Figure 2A), where a flap was observed in the left atrium, which a priori appeared to be inserted in the 7-mm interventricular septum, suggestive of cor triatriatum sinister. The other end of the lamina could not be observed, and it was not possible to determine if it completely divided the left atrium. Flow through the mitral and tricuspid valves did not present regurgitation, and there were no abnormalities in the myocardium. The remainder of the echocardiographic findings and the rest of the anatomical structures at all levels were normal. The ultrasounds at weeks 30 (Figure 2B), 33, and 37 confirmed the persistence of cor triatriatum sinister, but a complete path of the lamina crossing the entire atrium could not be verified at any time.

The final diagnosis of the presented case was cor triatriatum sinistrum.

We did not provide treatment. We decided on expectant follow-up ultrasound management every 4 wk.

The pregnancy resulted in vaginal delivery without complications. The newborn weighed 3402 g and presented an Apgar scores of 9, 10, and 10 at 1, 5, and 10 min, respectively, with good adaptation to extrauterine life without the need for special measures. Echocardiography was performed in subsequent follow-up during the first 26 mo of life, which showed a heart with normal-sized cavities, complete type I interventricular septum, and a complete patent fibrous septum in the left atrium crossing the atrium diagonally. It was unrelated to the mitral valve, dividing the atrium into two parts, without generating obstruction to the flow, consistent with cor triatriatum sinister. The four veins reached the left atrium, without acceleration within them, thus ruling out abnormal pulmonary drainage. The newborn was asymptomatic at all times.

Church had described this pathology in 1868[7]; however, a case of prenatal diagnosis of cor triatriatum sinister was first reported in 2011[8]. Since then, there have been few cases diagnosed before delivery and none were associated with pericardial effusion during the first trimester. Therefore, this case is the first report of early pericardial effusion during the first trimester associated with cor triatriatum sinister.

Pericardial effusion is an eminent pathological sign that is rare during the first trimester in the absence of fetal hydrops[9]. Since the first case recorded in 1995[10], cases of pericardial effusion associated with other cardiac malformations, especially cardiac diverticula[10,11] or cardiac tumors[12], have been published.

In this case, the management of pregnancy was expectant, with follow-up ultrasound every 4 wk, and good subsequent perinatal results.

In conclusion, based on a literature review, we can deduce that the presence of early pericardial effusion during the first trimester is an indicator of cardiac malformations during the early stages of embryonic development[11]. These cardiac malformations that could not be detected early because of an ultrasound limitation due to the cardiac size could subsequently be diagnosed with fetal growth, and we should take into account the detection of early pericardial effusion as a factor of high suspicion of fetal heart disease.

In any case, whether due to its low incidence, the need for a high degree of suspicion for detection, or its low ultrasound expression, cor triatriatum sinister is an echocardiographic finding that is rare in intrauterine life and currently remains a diagnostic challenge.

A non-despicable amount of cardiac malformations could not be detected early because of an ultrasound limitation due to the cardiac size. That is why the role of early markers of cardiac defects as pericardial effusion in the prenatal diagnosis is so important. Early pericardial effusion could be the first manifestation of many cardiac malformations that includes cor triatriatum sinister, which needs a high degree of suspicion for detection due to its low ultrasound expression.