Research Domain of This Article
Pathology

Carcinoma of the ampulla of Vater is an uncommon ampullo-pancreatobiliary neoplasm, and the most common histological type is adenocarcinoma with a tubular growth pattern. Invasive micropapillary carcinoma (IMPC) is an aggressive variant of adenocarcinoma in several organs that is associated with lymph node metastasis and poor prognosis. IMPC was first described as a histological subtype of breast cancer; however, IMPC of the ampulla of Vater is extremely rare, with only three articles reported in the English literature.

We have reported a case of IMPC of the ampulla of Vater in an 80-year-old man. Microscopically, the surface area of the carcinoma was composed of tubulopapillary structures mimicking intra-ampullary papillary-tubular neoplasm, and the deep invasive front area exhibited a pattern of IMPC. The carcinoma showed lymphatic invasion and extensive lymph node metastasis. The immunohistochemical study revealed mixed intestinal and gastric/pan-creatobiliary phenotypes.

This rare subtype tumor in the ampulla of Vater showed a histologically mixed phenotype and exhibited aggressive behavior.

Core Tip: Only 10 cases of invasive micropapillary carcinoma of the ampulla of Vater have been reported in the English literature. This histological subtype frequently shows lymphatic invasion and lymph node metastasis. Since limited histological studies conducted on this tumor, the present report is helpful for comprehensively understanding its histological and immunohistochemical characteristics.

Invasive micropapillary carcinoma (IMPC) arising in the breast, which was first described by Siriaunkgul et al[1] in 1993, is a special variant of invasive ductal carcinoma. Invasive carcinoma with micropapillary features also occurs in various organs, including the salivary gland, lung, urinary bladder, colon, and rectum[2-5]. The micropapillary subtype is recognized as an aggressive histological phenotype that shows extensive lymphovascular invasion and lymph node metastasis and has a poor prognosis[6,7]. The IMPC pattern has been described in many carcinomas of other organs, including small papillary tufts or solid nests devoid of fibrovascular cores lying within empty stromal spaces that do not represent lymphovascular channels. They occasionally show an “inside-out” growth pattern. To date, only a few case reports of ampullary carcinoma with a micropapillary component have been reported in the English literature[8-10]. IMPC in the ampullo-pancreatobiliary region was initially described by Khayyata et al[8], who documented a micropapillary lesion in 4.13% of all cancers in this location[8]. These patients underwent resection with lymphadenectomy in almost cases[8-10]. However, no optimal treatment strategy for IMPC in the ampulla of Vater has been established.

The ampulla of Vater consists of the common ampullary channel formed by the union of the distal common bile duct and distal main pancreatic duct. Thus, the epithelium of the pancreatobiliary and intestinal system merges at the ampulla of Vater. The ampullary papilla is lined by intestinal-type mucosa. However, at the site of penetration of the ampulla through the duodenal muscularis propria, the mucosa is covered with pancreatobiliary-type epithelium. Therefore, ampullary tumors may exhibit two major histologic types, which are classified into either “intestinal-type adenocarcinoma of duodenal papillary origin” or “ampullary carcinoma of pancreatobiliary origin.” However, about 40% of cases express a mixed phenotype, which should be classified as a distinct type of tubular adenocarcinoma[11]. The clinical outcome of the intestinal type (INT) is more favorable than that of gastric/ pancreatobiliary (GPB) type. The INT and GPB types can be immuno-histochemically distinguished by the mucin expression pattern[12,13]. Mucin (MUC) 1 expression is seen in the GPB type, while MUC2 expression is seen in the INT type. However, limited information is available regarding the expression of mucin in IMPC of the ampullary region. In the present report, the expression of MUC1, MUC2, MUC4, MUC5AC, and MUC6 in IMPC of the ampulla of Vater was investigated.

An 80-year-old man was referred to our hospital with symptoms such as anorexia, malaise, and jaundice.

The patient’s symptoms started 3 mo prior to the admission.

The patient’s medical history included hypertension and chronic pancreatitis. He was found to have dilatation of the main pancreatic duct incidentally on abdominal echography during medical examination 2 years ago. He used to consume 350 mL of beer per day for over 55 years, but he had quit 5 years ago. He smoked cigarettes briefly at the age of 20.

The patient did not have any family history.

Magnetic resonance cholangiopancreatography showed a 7 mm × 7 mm shadow defect in the duodenal papilla with a rim-enhancing lesion in the periampullary region and slight dilatation of the main pancreatic duct. Endoscopic retrograde cholan-giopancreatography revealed a 7-mm lesion deficit of the contrast medium from the duodenal papilla to the distal bile duct. A stent was placed in the pancreatic duct and the common bile duct to decompress the pancreas and bile duct. A biopsy specimen revealed well-differentiated tubular adenocarcinoma. Based on the diagnosis of adenocarcinoma of the ampulla of Vater, the patient underwent subtotal stomach-preserving pancreatoduodenectomy and was discharged after an uneventful recovery.

Gross examination showed an irregular papillary projection at the enlarged papilla of Vater measuring 23 mm × 10 mm. The papillary tumor had spread in the dilated ampullary channel and had an exophytic growth pattern (Figure 1A). The cut surface of the tumor was gray to white in color (Figure 1B). Histopathological examination revealed that the surface of the tumor consisted of an adenomatous component with a low-to-high grade dysplastic area (Figure 2A and B), while the deep part of the tumor consisted of an adenocarcinoma showing an invasive micropapillary pattern (Figure 2C and D). The micropapillary component comprised 60% of the tumor. Numerous neutrophilic infiltrations were observed in the tumor nests and stroma, and they formed focal intraepithelial microabscesses (Figure 2E). The carcinoma invaded the duodenum, pancreas, and intrapancreatic bile duct. Metastasis was seen in five of the 13 peripancreatic lymph nodes. Immunohistochemical analysis showed the tubular and micropapillary areas were positive for CK7, a caudal-related homeobox transcription factor-2 (CDX2) (Figure 3A-D), and MUC014E. The tubular component on the surface was positive for CK20 (Figure 3E) and focally positive for MUC2, MUC5, and MUC6. The micropapillary component was focally positive for MUC1 (Figure 3F); no tumor cells expressed MUC4. 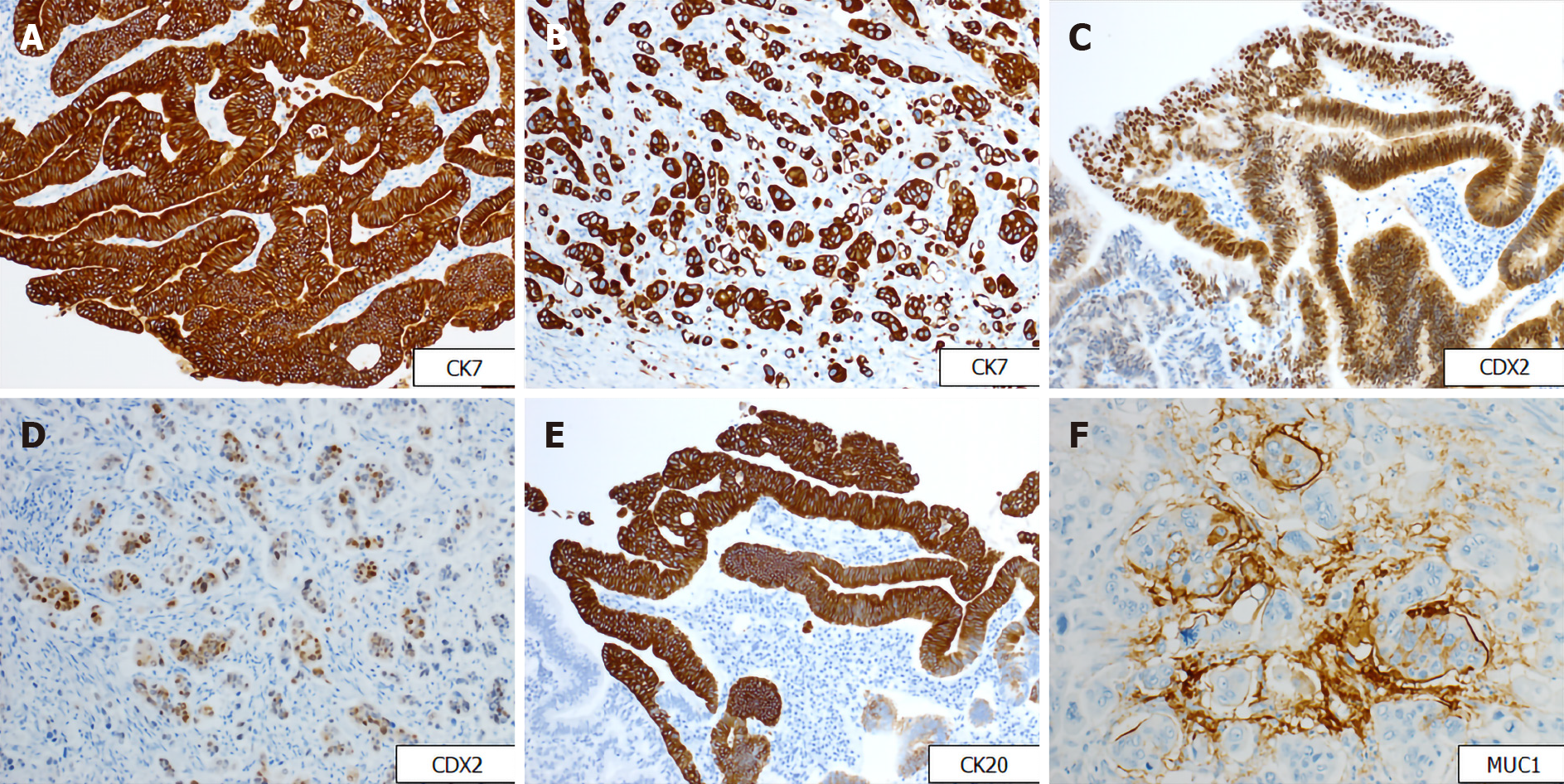 The final diagnosis of the presented case is IMPC of the ampulla of Vater.

The patient underwent subtotal stomach-preserving pancreatoduodenectomy with D2 lymphadenectomy. He received chemotherapy after surgery with oral administration of S-1 (also known as TS-1; Taiho Pharmaceutical Co. Ltd.; Tokyo, Japan). The initial dose of S-1 was determined according to the BSA and administered at 80 mg per day. A 2 wk administration followed by a week rest was continued as postoperative adjuvant chemotherapy for a year.

The postoperative course showed abdominal pain caused by pancreatic fistula, which was successfully treated with fluid replacement and fasting for 7 d. The patient was discharged 21 d after surgery. The patient received postoperative chemotherapy as described above and was monitored at regular intervals through clinical examinations, biochemical investigations, and imaging studies.

Serum tumor marker levels of CEA gradually increased monthly after surgery, whereas CA19-9 levels remained normal (Figure 4). However, there was no abnormality observed on the clinical examination performed each month, and no evidence of recurrence was noted on routine 6 mo follow-up computed tomography. The patient currently remains in a stable condition without recurrence of the disease for 6 mo since surgery and continues to receive treatment with S-1. 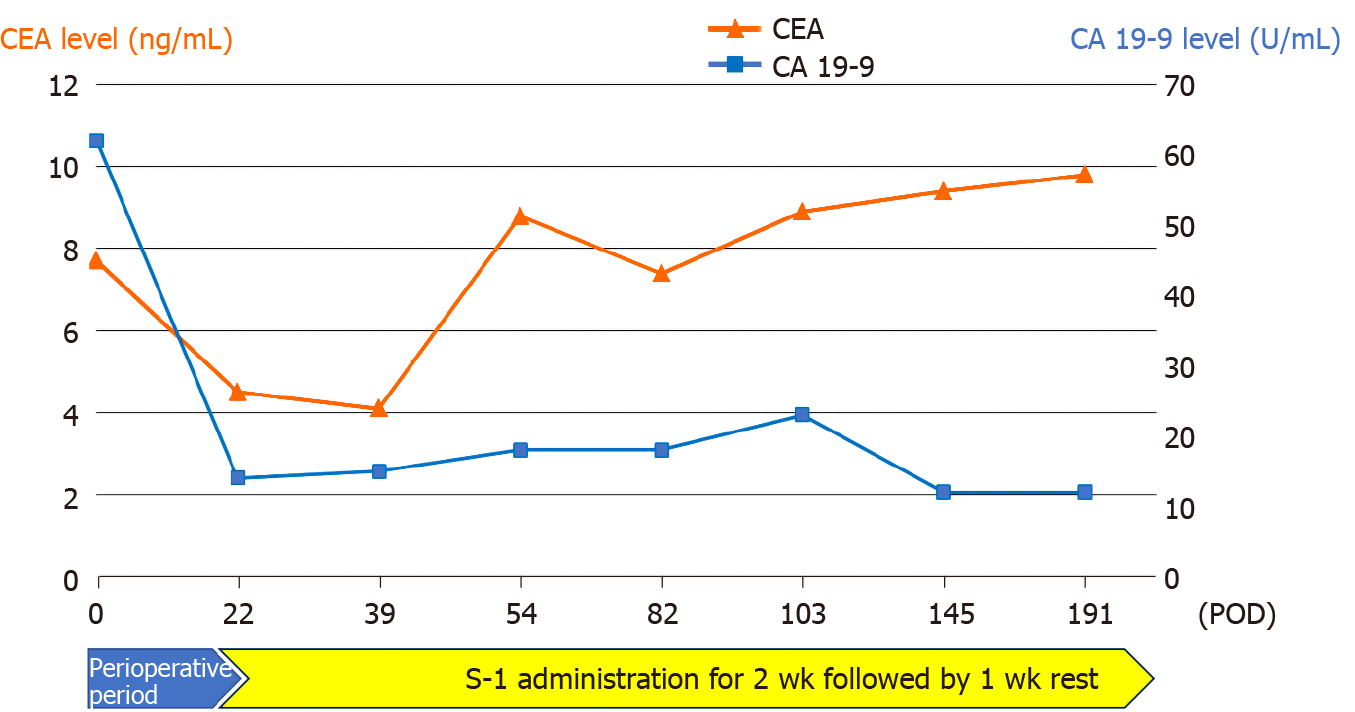 Ampullary carcinoma accounts for 0.2% of all gastrointestinal malignancies, and IMPC is an extremely rare subtype of adenocarcinoma of the ampulla of Vater[14,15]. Only 10 cases of IMPC in the ampullary region have been reported in the English literature; the clinicopathological findings are summarized in Table 1[8-10]. The ratio of male to female IMPC is 10 to 1, and the median age is 69 years (range, 41-80 years). True ampullary carcinoma has a better prognosis than pancreatic carcinoma and bile duct cancer[16]. However, in all cases including the present case, the median overall survival time was 11 mo (range, 6-25 mo), with a generally worse prognosis than other subtypes of ampullary carcinoma[15]. Most cases of ampullary adenocarcinoma develop sporadically. Cigarette smoking and chronic infection by liver fluke are considered risk factors[17]; however, our patient reported smoking cigarettes at the age of 20, although very briefly. Neurofibromatosis type I, familial adenomatous polyposis, and Muir–Torre syndrome seem to be predisposing factors for ampullary carcinomas, but these syndromes were not observed in the present case[18-20].

Although most ampullary tumors are adenocarcinomas of INT, GPB, or mixed type, ampullary cancer has been proven to be of highly heterogeneous types[11,21,22]. Ampullo-pancreatobiliary cancers are classified into nine distinct histological subtypes according to the World Health Organization classification[11]. Among them, IMPC is a special and rare subtype of ampullary carcinoma with high malignant potential. The classification of ampullary adenocarcinoma is based on immunohistochemical staining findings[11,21]. The INT immunophenotype is characterized by the expression of MUC2 and CDX2, while the GPB immunophenotype is characterized by the expression of MUC1, MUC5AC, and MUC6[22]. Expression of both CK7 and CK20 were observed in more than half of the cases[21]. In our case, the tumor cells were diffusely positive for CDX2 and CK7. In addition, the surface tubular part of the tumor was positive for MUC2, and the micropapillary part was positive for MUC1. Thus, the present case was classified as a mixed subtype. However, since the ampulla is a transitional area covered with several epithelial components, it is occasionally difficult to clearly subdivide ampullary adenocarcinomas into INT or GPB types. These cases account for half of all the ampullary carcinomas and should be classified as tubular adeno-carcinomas of mixed type[11,21].

The differential diagnosis of micropapillary lesions in the ampulla of Vater includes undifferentiated carcinoma with osteoclast-like giant cells and metastatic carcinomas. In our case, the tumor nests mimicked giant cells; however, the tumor cells had high-grade cytologic atypia and were positive for cytokeratin. Metastasis in the ampulla of Vater has been described for various cancers, including breast cancer, colon cancer, and sarcoma. However, in our case, clinical investigation did not detect any primary tumors outside the ampullary region of Vater.

We have reported a rare case of IMPC in the ampullary region. A diagnostic criterion to confirm this tumor has not been established thus far. This rare variant of ampullary adenocarcinoma has a poor prognosis and limited information is available regarding its pathogenesis and treatment. Further investigation with other methods, including genetic analysis, would be necessary to differentiate IMPC of the ampulla of Vater.