Currently, open reduction internal fixation is the conventional surgical method for treatment of double ulna and radius fracture. However, open reduction is associated with a high risk of complications. This case of forearm double fracture involved a patient treated using an Acumed intramedullary nail. The patient experienced good follow-up outcomes. The Acumed forearm intramedullary nail enables early functional exercise and hastens healing of the fracture. Few studies have reported on the use of this approach for the treatment of fractures.

A 23-year-old male patient was admitted to hospital after 5 h of pain, swelling, and limited activity of left forearm caused by a careless fall. Physical examination showed stable basic vital signs, swelling of the left forearm, and severe pain when pressing on the injured part of the forearm. Further, friction was felt at the broken end of the bone; the skin was not punctured. Movement of the left hand was normal, and the left radial artery pulse was normal. Three-dimensional computed tomography examination showed an ulna fracture of the left forearm and comminuted fracture of the radius. The fracture was located in the upper third of the radius, with significant displacement on the fracture side. Clinical diagnosis further confirmed the left radius comminuted fracture and ulna fracture. After analyzing the fracture pattern, age, and other patient characteristics, we chose an Acumed nail for treatment and achieved good follow-up outcomes.

Core Tip: Currently, open reduction internal fixation is the conventional surgical method for treatment of ulna and radius double fracture. However, that approach causes soft tissue damage of blood vessels, the periosteum, and the radial nerve. In addition, performing open reduction and internal fixation using a plate for treatment of double fractures of radius and ulna has side effects and complications. The Acumed forearm rod system was used in this patient for treatment of ulna and radius fracture with minimally invasive surgery; good follow-up outcomes were achieved.

Ulna and radius diaphysis fractures are common in young adults and are mainly caused by violent injury. The fracture position can be lateral or overlapping, with angulation and rotational displacement after complete fracture of both diaphyses due to attachment of interosseous membrane and muscle. Forearm is mainly affected by rotation. Poor treatment of the fracture affects the function of the forearm or even the entire upper limb. Guidelines for treating intra-articular fracture are[1] help in choosing the appropriate fixation method to accurately restore limb function. Open reduction provides strong fixation and a high fracture healing rate, and is commonly used for fracture treatment[2]. However, the procedure is associated with complications, such as extensive soft tissue injury, radial nerve injury, refracture after plate removal, and bone nonunion caused by periosteum stripping[3]. The intramedullary nail treatment of forearm double fracture in adults is a minimally invasive procedure and is associated with fewer complications than conventional surgery. Previous studies report clinical use of the method. This study reports a case of forearm double fracture treated using an Acumed intramedullary nail, that achieved good follow-up outcomes.

A 23-year-old male patient was admitted into hospital after 5 h of pain, swelling, and limited activity of the left forearm caused by a careless fall.

The patient presented with swelling of the left forearm, severe pain on pressing the injured area, and friction at the broken end of the bone. The skin at the injured area was not punctured.

The patient was in good health and no history of other diseases.

The patient presented with signs of forearm fracture including, swelling, severe pain on pressing the injured area, and friction at the broken end of the bone. The skin at the site of injury was not punctured. Movement of the left hand was normal, and the left radial artery pulse was normal. 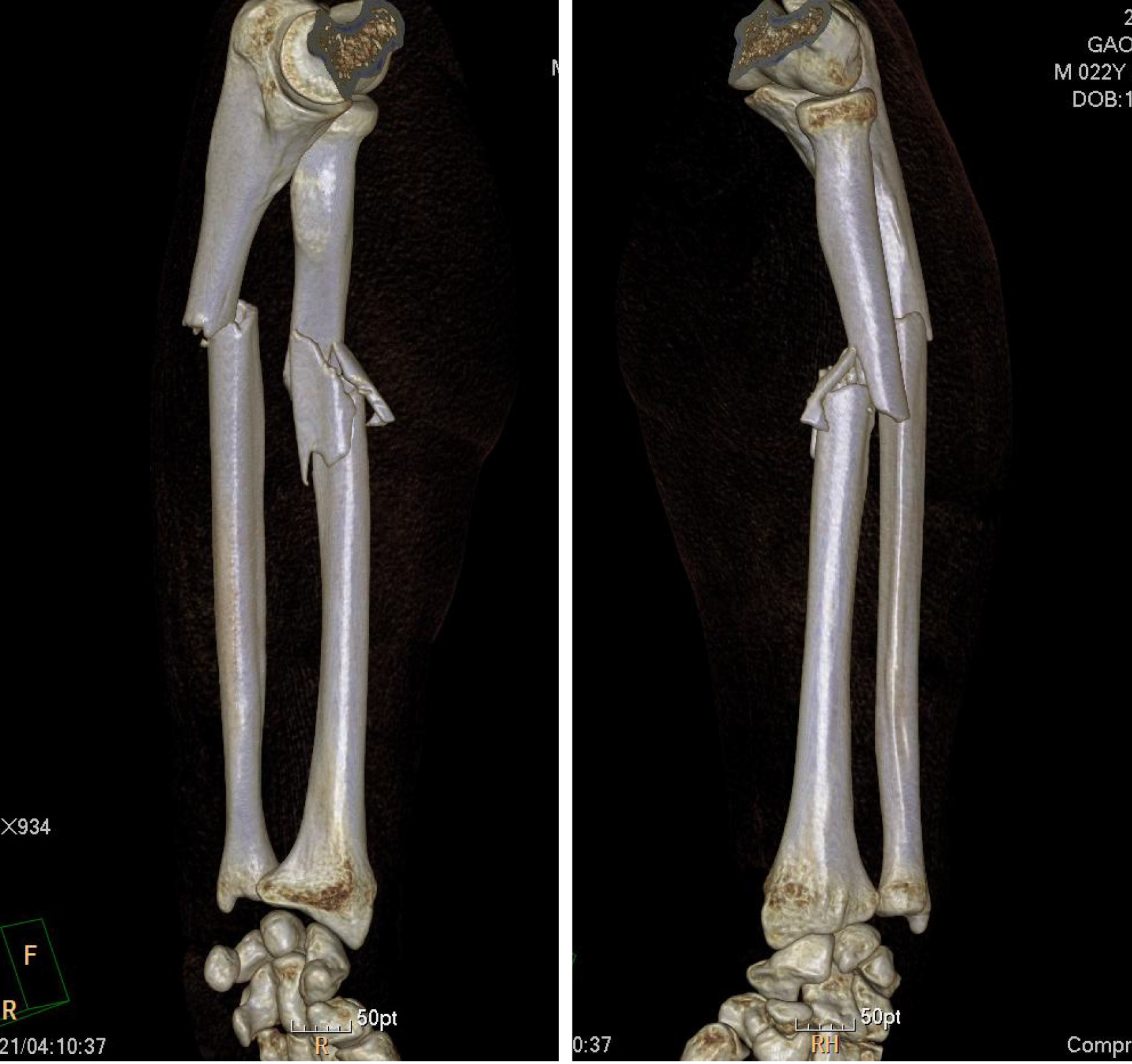 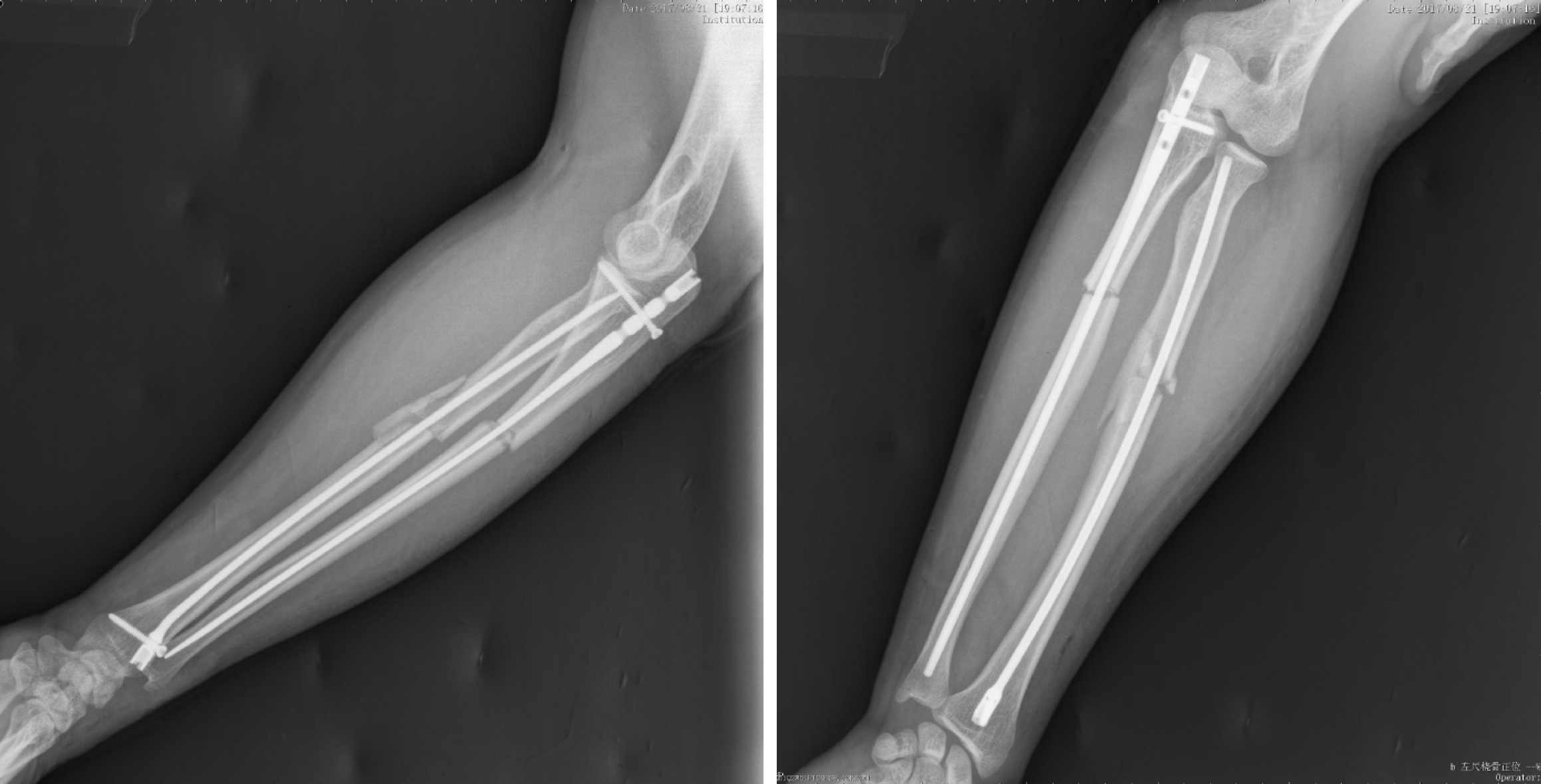 Detumescence medication was administered and the area around the functional position of elbow and wrist joint was fixed with plaster for 4 wk to prevent excessive swelling of the forearm and osteofascial compartment syndrome. The patient underwent gradual rehabilitation exercise after removal of the plaster. In the first 6 wk after surgery, the patient underwent exercise for flexion and extension of the joints of the elbow and wrist. Forearm rotation exercise was performed after week 6.

Limb function and imaging examinations were carried out at 1 mo, 3 mo, 6 mo, and 12 mo after surgery, to check for fracture displacement, implant loosening, delayed fracture healing, and fracture nonunion. Function of the fractured limb was evaluated using the disabilities of the arm, shoulder and hand (DASH) score. A score of 0 indicated that upper limb function was completely normal, and a score of 100 indicated that the upper limb function was extremely limited[4]. The DASH scores were 20, 14.2, 5, and 1.7 points (Figure 3). One month after the operation, a small amount of callus formation was seen on X-ray examination. The fracture line was still obvious, but the fracture remained in a good position and showed no signs of displacement. Six months after surgery, the fracture was almost healed. The ulna fracture line could be seen faintly, but the radial line was completely gone, with a small defect on the lateral radial edge. At the last follow-up, the imaging results showed complete fracture healing. As no fracture line was observed and the limb function had recovered well, we carried out the surgery to remove the implant successfully (Figures 4 and 5). 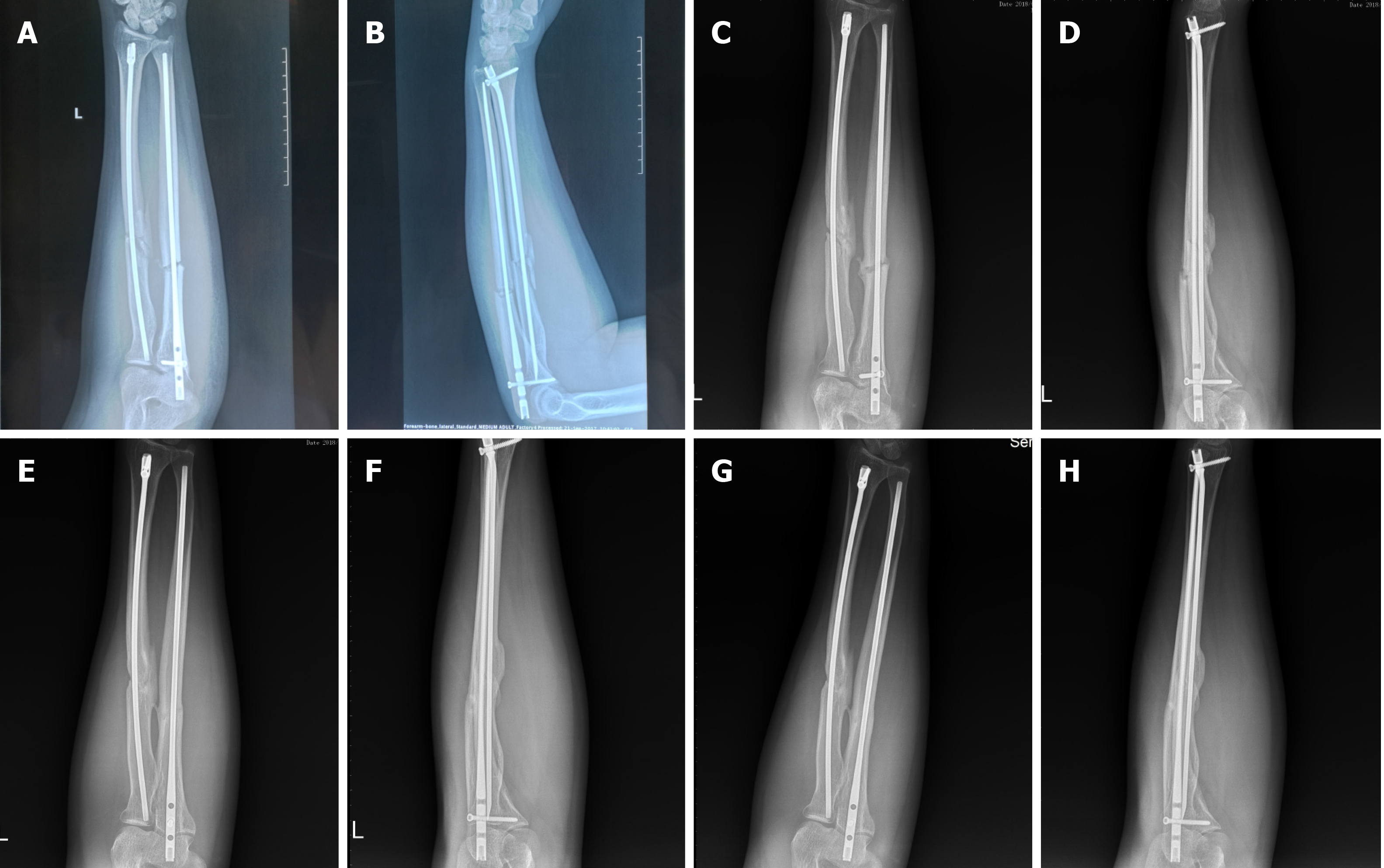 The forearm mainly provides rotation required for movement of the entire upper limb. Poor treatment of fractures of the forearm significantly affects the function of the upper limb. The fracture end is unstable after an ulna and radius double fracture due to the presence of muscle and interosseous membrane. Before the discovery of internal fixation technology, manual reduction and external plaster fixation were the main treatment methods for forearm double fractures. However, those methods are limited by unstable fixation, which may cause fracture malunion or nonunion. Therefore, surgical treatment is preferred over conservative treatment.

Closed reduction Kirschner wire fixation is also used in some situations. Unfortunately, because the Kirschner wire can easily undergo deformation, it is difficult to advance it into the medullary cavity. Moreover, it is difficult to rebuild the diaphyseal rotation alignment due to the unstable internal fixation, which increases the risk of needle withdrawal after surgery. The fixation method also requires a long interval before casting. The aforementioned shortcomings of fixation and the high fracture nonunion rate limit its widespread clinical application[5].

In recent years, elastic intramedullary nail technology has been widely adopted. In the treatment of forearm diaphyseal fractures, elastic intramedullary nail technology is only suitable for young children, with less trauma and fewer complications, and it does not destroy the epiphysis[6]. It is suitable for transverse, short oblique, and simple comminuted fractures. For long oblique or more complex comminuted fractures, it creates tension in the medullary cavity, and hence does not provide a good fixation effect. Its indications are relatively few[7].

The first case study of treatment of forearm fracture was reported in 1913[14]. However, the initial implants were Rush rods, Kirschner wires, and elastic intramedullary nails, which lack locking and compressing functions. They therefore do not allow rotational and axial stability. Therefore, the duration of healing after using those internal rod systems was approximately 21%[13]. The Acumed forearm nail is more effective than previous approaches as it has interlocking screws at the insertion end to provide axial stability and achieve effective compression at the fracture end. Further, it provides an antirotation function through the paddle structure on the other side, thus improving stability at the fracture side, and promoting healing of the fracture. The Acumed intramedullary nail is effective in forearm and fibula fractures. Bugler et al[15] carried out a study on 105 patients with fibular fracture who were treated with the Acumed intramedullary nail. The method achieved good follow-up outcomes during an 8-year follow-up period after surgery. In this case, an Acumed nail was used to treat a forearm fracture after analysis of the fracture pattern, patient age, and other characteristics.

Fracture characteristics of a patient with forearm fracture were analyzed and Acumed nail was used for fixation of the fracture. The surgical procedure was simple, with minimal bleeding. The study findings show that this invasive operation did not affect the blood supply to the fracture. The procedure did not injure soft tissue and it achieved relatively stable biological internal fixation with good surgical results. Use of the Acumed forearm intramedullary nail is a novel approach for treatment of double forearm fractures.