The laparoscopic technique has been widely applied for early gastric cancer, with the advantages of minimal invasion and quick recovery. However, there is no report about the safety and oncological outcome of laparoscopic gastrectomy with D2 lymph node dissection for patients after neoadjuvant chemoradiotherapy.

A 60-year-old man was diagnosed with advanced distal gastric cancer, cT4aN1M0 stage III. The neoadjuvant chemoradiotherapy was performed based on the regimen of gross tumor volume 50G y/25 f and clinical target volume 45 Gy/25 f, as well as concurrent S-1 60 mg Bid. Then laparoscopic distal gastrectomy with D2 lymph node dissection was undertaken successfully for him after achieving partial response evaluated by radiological examination. The patient recovered smoothly without moderate or severe postoperative complications. The postoperative pathological stage was ypT3N0M0 with American Joint Committee on Cancer tumor regression grade 1. He was still in good condition after 5 years of follow-up.

Neoadjuvant chemoradiotherapy followed by laparoscopic technique could be applicable and may achieve satisfactory oncological outcomes. Our finding requires further validation by cohort studies.

Core Tip: The radicalness for locally advanced gastric cancer depends on the completed R0 resection. Although perioperative treatment strategies have been widely used for patients to reinforce the treatment effect, the use of neoadjuvant chemoradiation is controversial, let alone whether the patients can benefit from minimally invasive surgery. We presented the first case treated by laparoscopic distal gastrectomy following neoadjuvant chemoradiation. The perioperative safety and short-term and long-term oncological outcomes in this patient are described in detail.

Although surgery is the only curative option for gastric cancer, the mortality of patients after radical surgery remains high because of a significant number of local regional or systemic recurrences[10]. Chemoradiotherapy has been recommended as a supplement to radical surgery by the National Comprehensive Cancer Network[11]. Postoperative therapy administration is restricted in some patients due to surgical complications because the recovery time may exceed the prescribed time period for treatment[12]. However, perioperative treatment modality can avoid the shortcomings. Neoadjuvant chemoradiotherapy (NACRT) has the advantages of avoiding unnecessary surgery by shrinking the tumor size and facilitating a high rate of R0 resection, with acceptable rates of acute and late toxicities[13-15].

To the best of our knowledge, this is the first report to date regarding the safety and short-term oncological outcome of NACRT followed by laparoscopic D2 gastrectomy.

A 60-year-old man presented with abdominal distension and weight loss of over 10 kg for approximately 6-mo duration.

He was an otherwise healthy man with no remarkable medical history.

There was no obvious abnormality in any past illness.

There was no special history and personal history. The patient had no known family history of cancer.

Physical examinations revealed a thin, emaciated male with normal vital signs. The abdomen was tender, and there was no palpable mass. Superficial lymphadenopathy was not detected.

An endoscopy was undertaken and revealed an ulcerative lesion adjacent to the gastric antrum, with a dike-like bulge around the edge. Pylorus was invaded by the lesion, resulting in an incomplete obstruction (Figure 1). Enhanced abdominal computed tomography (CT) indicated that the wall of the antrum was thickened with significant enhancement, with a maximum thickness of 21 mm. The surface of the serosa was fuzzy; however, the border near the pancreas remained clear (Figure 2). Multiple enlarged lymph nodes were found in the lesser gastric curvature; the diameter of the largest one was 7mm. No distant metastasis was detected from the pelvis or chest CT. 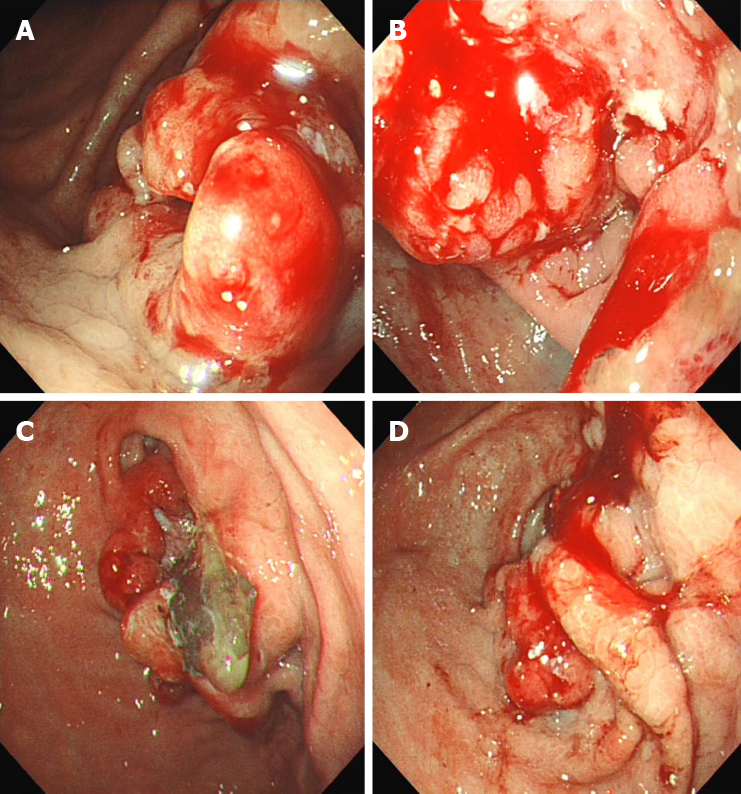 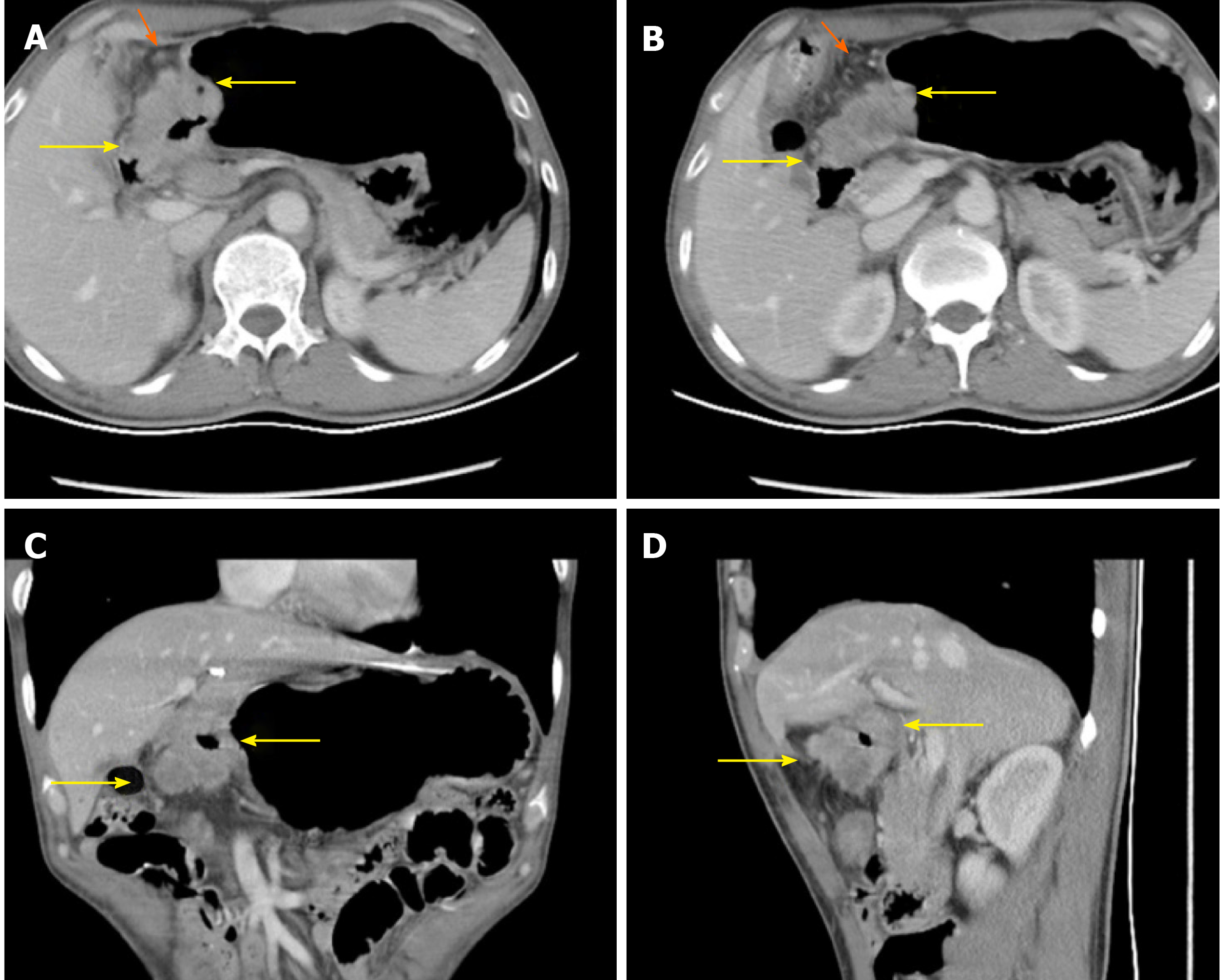 The pathology obtained from the endoscopic biopsy confirmed a moderate to poor differentiated adenocarcinoma, with a Lauren type of intestine.

The patient was diagnosed as having a gastric antrum carcinoma, Borrmann type III, with lymph nodes metastases. The clinical stage was confirmed as being cT4aN1M0 stage III.

The patient and his family had a very strong desire for radicalness of surgery. However, because of the wide infiltration of the primary foci with suspicion of lymph nodes metastasis, which were majorly localized on the lesser curvature, a direct surgery may not be capable of radical cure. A tumor downstaging by chemoradiation was strongly recommended for the preparation of surgical radicalness. Moreover, the patient was 60-years-old. Despite his stable physical status before cancer diagnosis, with 172 cm height and 45 kg weight, his body mass index was only 15.2 kg/m2 with nutritional deficiency anemia at the moment. Even if the patient received a completed D2 lymphadenectomy with R0 resection, his nutritional status required a long period of recovery. The chance that he could benefit from, or be able to receive, the adjuvant treatment was bleak, as adjuvant chemotherapy is often assumed to have little benefit for delayed initiation. With the concerns above, a preoperative concurrent radio-chemo therapy was designed by the multidisciplinary team.

The NACRT was given at a total dose of gross tumor volume 50 Gy and clinical target volume 45 Gy, in 25 fractions, five times a week, with concurrent S-1 60 mg twice daily. The NACRT was well tolerated with no severe adverse events according to the Common Terminology Criteria for Adverse Events v5.0[16]. The most serious problems among the mild-to-moderate adverse events was the grade 2 white blood cell decrease (white blood cells count 2.92 × 109/L) 3 wk after radiotherapy (RT) completion. The white blood cell count went back to normal (8.69 × 109/L) after oral leucocyte increasing drugs treatment (Diyu Shengbai tablets) for 3 wk. For the incomplete obstruction, enteral nutrition was recommended for the patient. The nutrition status of the patient gradually improved during the NACRT and waiting period. With a 15 kg increase in weight, his albumin rose to 41.4 g/L, and the hemoglobin returned to 101 g/L. His neutrophil-to-lymphocyte ratio, on the other hand, dropped to 1.87 before surgery.

An enhanced abdominal CT was performed to evaluate the response of NACRT at the time of completion and 6 wk after NACRT (Figure 3). The tumor thickness showed sustained shrinkage from 21-12 mm to 12-10 mm during the NACRT period. With shrinkage rate by 52%, a partial response was considered by the multidisciplinary team[17]. Endoscopic ultrasound was performed using a radial scanning ultrasound endoscope to evaluate the response of NACRT at the same time (Figure 4), which indicated an ulcerative lesion adjacent to the gastric antrum with pyloric stenosis. The lesion was reflected as a hypoechoic signal under the endoscopic ultrasound, invading the entire layer, partly to the serosa with the maximum thickness 1.09 cm. A hypoechoic nodule beside the antrum, measuring approximately 2.05 cm × 1.3 cm in size, was also detected. Therefore, an uT4aN1M0 tumor after NACRT was considered and restaged. 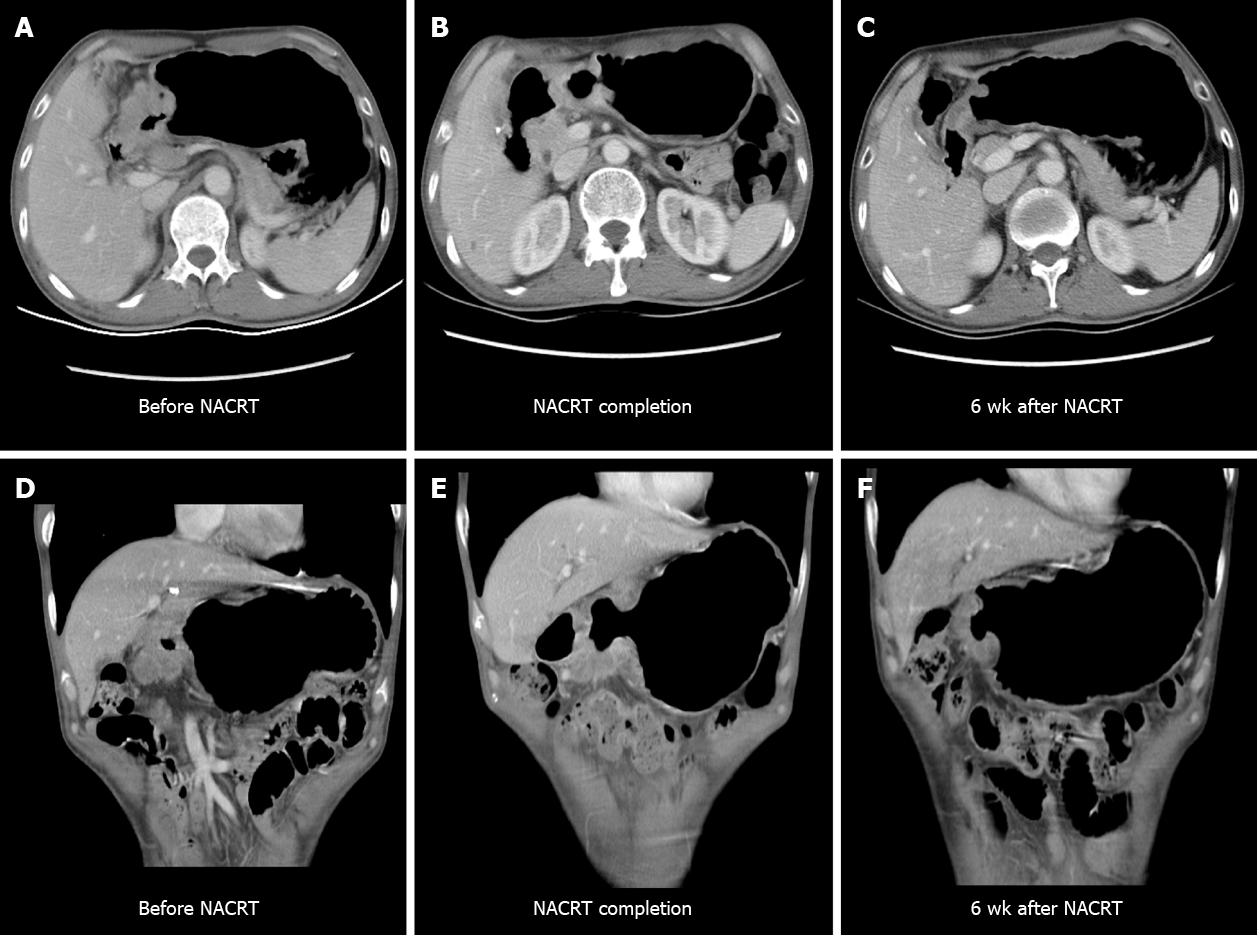 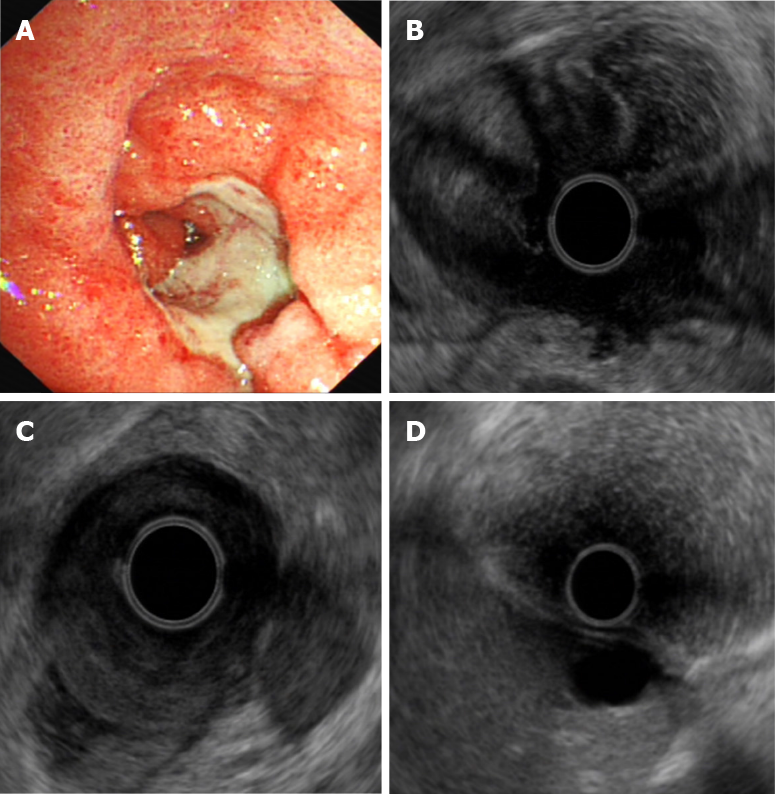 Open distal gastrectomy with D2 lymph node dissection was planned for the patient. However, the patient was very eager to receive only minimally invasive surgery, and thus refused open surgery. The patient received laparoscopy-assisted distal gastrectomy with D2 lymph node dissection and Billroth II anastomosis successfully 4 wk after the last evaluation. The entire surgical procedure was recorded on video. The operation lasted for 240 min. The blood loss was 100 mL. The first flatus time was 3 d after the operation. Upper gastrointestinal radiography was performed 7 d after the operation, indicating that gastric peristalsis was good with no anastomosis leakage. The patient was allowed to intake a liquid diet and was then discharged on day 12 without grade II or more Clavien-Dindo complications[18].

Postoperative pathological evaluation was completed 7 d after surgery. Small groups of cancer cells were detected outside of the muscularis propria, accompanied by the formation of extracellular mucus pools, which were surrounded by fibrosis and chronic inflammatory cells (Figure 5). The necrosis rate was > 90% (residual tumor/tumor bed < 10%). Thus, the patient was evaluated as tumor regression grade 1 based on American Joint Committee on Cancer/College of Pathology criteria and as tumor regression grade 2 for Japanese Gastric Cancer Association system, both belonging to a subtotal regression. No vascular embolus or perineuronal invasion was detected. No metastases were found in lymph nodes (0/31). Fibrosis was detected in some lymph nodes, which was considered as change post NACRT. No cancer cell was detected in the gastric stump or duodenal stump. Therefore, the pathological stage was ypT3N0M0.

The results of ARTIST and ARTIST-2 have put chemoradiotherapy (CRT) into an uncertain situation in patients undergoing D2 lymphadenectomy[19,20]. In ARTIST, although the postoperative chemotherapy plus CRT revealed a superior benefit in disease-free survival (DFS) compared to chemotherapy alone in patients with positive lymph node metastasis, the survival benefit was not retained in all patients[20]. In the subsequent ARTIST-II trial interim result, no difference in DFS between S-1 and oxaliplatin (SOX) and SOX plus CRT was found (P = 0.667)[19]. However, as gastric adenocarcinoma is theoretically radio-sensitive, the futility of CRT may be credited to more ways than one: Does the minimal peritoneal metastasis already exist before treatment; is the delineation of gastric lymph node stations under the same treating protocol? On the other hand, rather than being a role of supplementary or salvage after surgery, NACRT brings more than what postoperative RT/CRT can offer. Not only do patients have better performance status and are often more tolerant to radiation predated to surgery, but it could minimize the primary site, enhance the R0 resection rate (especially for those with borderline resectable tumor), reduce the extent of surgery (conserving stomach), benefit form minimal invasion, etc.

The depiction of NACRT is restricted by the scant number of clinical trials with high levels of evidence. As we reviewed the phase II/III studies of NACRT (not for esophagogastric junction or esophagus) on gastric cancer following curative gastrectomy from the past 20 years through a search of the PubMed, MEDLINE and EMBASE (language was limited to English, Table 1 and 2)[21-34], to date only Skoropad et al[32] reported a complete phase III trial result with no significant findings in 10-year overall survival (NACRT + Surgery vs Surgery, 32% vs 18%). However, neither the dose nor the technique in target delineation met the current standard. Patients in their study received RT rather than CRT modalities that are commonly accepted today. While the rest of the phase III trials are worth watching (Table 2), many phase II trials can shed light on the patterns of NACRT. The higher rate of pCR (mean pCR rate 16.4% in initially resected cases) can be found in most of them (Table 1), when compared with neoadjuvant chemotherapy, usually no more than 10%[35].

Our previous experience has proved neoadjuvant chemotherapy does not increase the complications of radical gastrectomy[44]. In this case, the number of lymph node dissection was 31 and the blood loss was 100 mL without complications, which may indicate that the laparoscopic technique is applicable to patients with advanced gastric cancer after NACRT. However, in this case, the severe fibrosis around the stomach make the surgery more difficult and delicate, resulting in a relatively longer operation time (240 min) in the patient treated by NACRT compared to those who were not. Yet with the amplification effect of laparoscopy, laparoscopic gastrectomy was safe and feasible for advanced gastric patients who were treated by an experienced department.

NACRT followed by laparoscopic distal gastrectomy with D2 lymph node dissection was safe and achieved satisfactory oncological outcomes for the present patient. However, well-designed prospective trials are still required to prove whether laparoscopic gastrectomy can be recommended as an initial treatment for advanced distal gastric cancer after NACRT.