Article-Type of This Article
Minireviews

Primary idiopathic intestinal lymphangiectasia is an unusual disease featured by the presence of dilated lymphatic channels which are located in the mucosa, submucosa or subserosa leading to protein loosing enteropathy.Most often affected were children and generally diagnosed before third year of life but may be rarely seen in adults too. Bilateral pitting oedema of lower limb is the main clinical manifestation mimicking the systemic disease and posing a real diagnostic dilemma to the clinicians to differentiate it from other common systemic diseases like Congestive cardiac failure, Nephrotic Syndrome, Protein Energy Malnutrition, etc. Diagnosis can be made on capsule endoscopy which can localise the lesion but unable to take biopsy samples. Thus, recently double-balloon enteroscopy and biopsy in combination can be used as an effective diagnostic tool to hit the correct diagnosis. Patients respond dramatically to diet constituting low long chain triglycerides and high protein content with supplements of medium chain triglyceride. So early diagnosis is important to prevent untoward complications related to disease or treatment for the sake of accurate pathological diagnosis.

Core tip: Waldmann’s disease is an unusual primary idiopathic intestinal lymphangiectasia, which results in protein loosing enteropathy. Recently, double balloon endoscopy and biopsy in combination is an effective diagnostic tool to hit the correct diagnosis to avoid untoward complications related to disease and treatment due to misdiagnosis. Thus, the clinician should keep in mind this rare condition as a differential diagnosis of oedema.

Primary Intestinal lymphangiectasia (PIL) was originally described in 1961 by Waldmann et al[1]. It is an unusual cause of protein losing enteropathy either due to congenital malformation or obstruction of lymphatics of intestine[2]. Lymphangectasia is characterised by dilated and proliferating lymphatic channels located in mucosa, submucosa or subserosa leading to protein loosing enteropathy and loss of lymph into gut resulting in to hypoproteinemia, hypogammaglobulinemia, hypoalbuminemia and lymphopenia[3-5]. Peripheral oedema usually symmetrical (lower limb oedema) is the main clinical feature posing a real diagnostic dilemma to the clinicians to differentiate it from other common conditions like congestive cardiac failure, nephrotic syndrome, protein energy malnutrition, etc[3]. Other symptoms are ascites, pleural effusion, weight loss and abdominal pain, diarrhoea with increased faecal loss of protein and fat with increased serum levels of α1-antitrypsin[2,5]. Diagnosis is defined by endoscopic evaluation and confirmed on histopathological evaluation of biopsy of small intestine[1].

Now a day double balloon endoscopy and biopsy is the mainstay to arrive at correct diagnosis.

The worldwide incidence and prevalence of PIL is not known[2,6]. After 1961, as per available literature less than 200 cases were reported[7,8]. Very few familial forms are reported[1,2,9]. There is no specific predilection for sex and race[6]. Most commonly, it has been seen in children and majority of the cases were diagnosed at or before 3 years of age but can be seen in adults also[5,6].

Waldmann’s disease is also called as exudative enteropathy. The pathogenesis is not clear. The proposed hypothetical theories for pathogenesis are.

The basic cause for protein loss in PIL is poorly understood although lymphatic channel malformation/lymphatic hypoplasia leads to obstruction in lymph flow with resultant increase in intraluminal pressure in lymphatic channels[6,10,11]. This, increased intraluminal pressure will cause dilatation of the submucosal,subserosal lymphatic vessels in the intestine finally leading to the rupture of the cystically dilated channels and leading to discharge of the lymph into the bowel lumen[6,12]. Thus, net result is hypoalbuminemia, hypogammaglobinemia and lymphopenia.

Genetic theory: There are mutations in genes that regulate the process of lymphogenesis[5]. Multiple genes, e.g., vascular endothelial growth factor receptor 3, prospero-related homeobox-transcriptional factor, forkhead transcriptional factor and SOX18 play vital role in lymphogenesis[13]. Mutation of the CCBE1 gene has been identified as a cause of intestinal lymphangiectasia in Hennekam syndrome.

Age-PIL is mainly seen in paediatric age group (usually before 3 years of age) and young adults but may be diagnosed in adults too[2,14-16].

Oedema is the main clinical manifestation. The patient may present with ascites, pleural effusion and pericarditis. Other symptoms are lymphedema, abdominal pain, fatigue, moderate diarrhoea, weight loss and deficiency of fat soluble vitamins may also be present.

Rarely lymphedema have been described which is elicited by “stemmer’s sign” and it is difficult to differentiate from other systemic causes of oedema[2,5]. Sonographic evidence of fetal ascites had also been reported[2,5,17].

Non-specific clinical features such as fatigue, nausea, vomiting, abdominal pain, weight loss, failure to thrive, moderate diarrhoea with faecal loss of fat along with increased faecal loss of protein, leading to rise in alfa-1- antitrypsin levels and there is deficiency of fat soluble vitamins[5,18].

Rare Associations-An association of PIL with celiac sprue was described[5,22]. PIL has been reported as a rare cause of lower gastrointestinal bleeding. In addition iron deficiency may occur[5,18]. Recently proved association with angiodysplasia leading to occult blood loss in PIL[5,23,24].

PIL may exist as a part of a genetic syndromes, i.e., Noonan, Von Recklinghausen, Hennekam and Yellow nail syndrome[2,5,14]. Finally, an association with autoimmune poly glandular disease type 1 has been described[5,32,33]. Recently a case of intestinal lymphangiectasia in a patient with infantile systemic hyalinosis syndrome has been reported[34].

Now days, diagnosis of Intestinal lymphangiectasia is based on characteristic findings during a double-balloon enteroscopy with further confirmation by histopathological examination of corresponding biopsy specimens[6,35]. To confirm the primary nature of waldmanns disease we must first exclude the secondary causes of intestinal lymphangiectasia[6].

Capsule endoscopy provides complete examination of small bowel mucosa thus can evaluate the extent of lymphangiectasia[36,37]. However, the drawback of capsular endoscopy is the inability to obtain biopsies. So recently double balloon enteroscopy is evolved.

Endoscopy reveals scattered white spots, which have been described as a characteristic snowflake appearance, (Figure 1) overlying the small intestinal mucosa[4,38]. 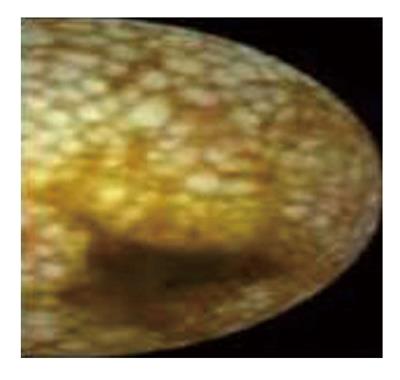 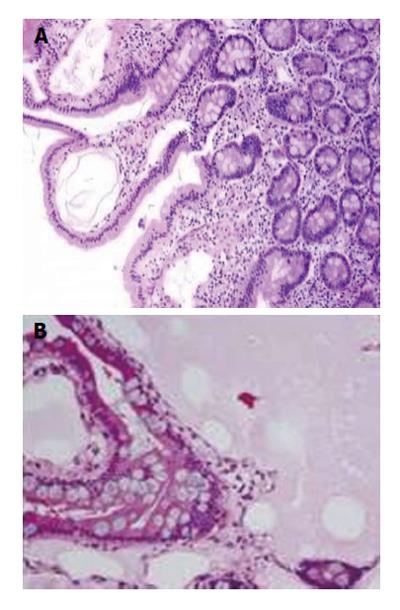 Figure 2 Histopathological examination of biopsies. A: Dilated lymphatics in mucosa and submucosa; B: 40 ×; showing dilated lymphatic channels filled with lymph.

99Technetium-labelled scintigraphy is useful to arrive at the diagnosis of PIL. Due to high cost and infectious risk, it has replaced with alfa-1-antitrypsin method[2,39].

Lymphoscintigraphy identifies abnormality in lymphatic tree but at present is not a routine method for PIL diagnosis[2,40,41].

Imaging with USG/CT scan has shown diffuse thickening of small bowel wall because of engorgement of villi that contain the dilated lymphatic channels[5,43]. CT scan may show “halo sign”. A halo sign that consist of thickened, low-attenuation inner ring representing dilated lymphatics and higher attenuation outer ring, which consist of muscularis propria and serosa[43-45]. Nonenhanced, fluid-sensitive MRI may show bright signal intensity, which corresponds to lymphangiectasia in the mucosa[42,44].

Finally, a recent report indicates there is failure of compensatory mechanism of production of T lymphocytes by the thymus to overcome the enteric loss of T lymphocytes leading to lymphopenia associated with lymphangiectasia[5,48].

The differential diagnosis of PIL is large and involves many conditions producing protein-losinggastroenteropathy. Much closer differential are those, which involve protein loss associated with impaired intestinal lymphatic drainage. Such conditions include cardiac causes like congestive cardiac failure, constrictive pericarditis and cardiomyopathy[49-52]. Surgical repair of complex congenital heart disease (such as the Fontan procedure for a functional single ventricle), other conditions like lymphenteric fistula[10,53], Whipple’s disease[54], Crohn’s disease[55], sarcoidosis[56], human immunodeficiency virus-related enteropathy[57], intestinal tuberculosis[58], radiation and/or chemotherapy with retroperitoneal fibrosis[59] and portal hypertension or hepatic venous outflow obstruction after liver transplantation and in congenital hepatic fibrosis due to phosphomannose isomerase deficiency[60].

The principal treatment for PIL is diet rich in protein, low in fat with supplementation of medium chain triglyceride. Medium chain triglyceride is directly absorbed in portal venous circulation by passing the intestinal lymphatics, thus provides the energy and lessens lacteal engorgement and lymph loss. A low fat diet reduces lymphatic flow and pressure preventing the lacteal dilation and lymph leakage resulting from their rupture. In some, reversal of clinical and biochemical changes has been seen with this dietary modification. In most patients, dietary treatment is permanently needed. This is found to be more effective in children than adults. In some cases, total parenteral nutrition is needed. Supportive therapy includes albumin infusion and paracentesis.

In patients, not responding to such therapy other options may be used after or in combination with dietary modification. These are octreotide, antiplasmin,tranexemic acid, vitamin D supplementation and surgical resection of segmental or localised intestinal lymphangiectasia[8,11,61].

To conclude PIL is an idiopathic protein loosing enteropathy either due to genetic defect or due to lymphatic obstruction. Careful endoscopic examination and meticulous histopathological evaluation is mandatory to arrive at correct pathological diagnosis to decide the proper treatment plan. One should keep in mind this rare condition as a differential diagnosis of oedema.