Article-Type of This Article
Letter to the Editor

Autoimmune pancreatitis (AIP) is a special type of chronic pancreatitis mediated by autoimmunity factors. It can be divided into two categories according to pathological characteristics: Lymphoplasmacytic sclerosing pancreatitis and idiopathic duct-centric pancreatitis. In the clinical setting, the imaging manifestations of some AIP cases are atypical, so it is difficult to distinguish it from general pancreatitis, pancreatic ductal adenocarcinoma, lymphoma, and other malignant disorders. Most importantly, the treatment for and prognosis of these diseases are different. Therefore, a timely correct imaging diagnosis of AIP is key for AIP patients. After that, clinicians can take appropriate treatment measures for those patients, which is helpful for the prognosis of AIP.

Core Tip: Autoimmune pancreatitis (AIP) is a special form of chronic pancreatitis mediated by autoimmunity. Because the clinical presentation is not specific, the progress of imaging diagnosis and differential diagnosis of AIP may increase the awareness of AIP among clinicians. Timely intervention is very good for AIP patients. Clinicians can adopt the effective method in the early course of the disease. We propose five related research directions in this paper. We hope that the clinical work and scientific research can start from these aspects in the future. AIP patients will benefit from continuous exploration of imaging differential diagnosis and prognosis assessment of AIP.

We read the interesting case report by Zhang et al[1]. In that paper, four patients with autoimmune pancreatitis (AIP) with positive immunoglobulin 4 (IgG4) manifestation were reported. Although those patients rejected steroid treatment, their AIP symptoms spontaneously became remissive during the disease course.

Regarding pancreatic imaging findings, three main features of the pancreas in those patients were given in that paper as follows: (1) The size and density or signal intensity of the pancreas returned to a normal condition; (2) there may be some signs related to progressive fibrosis within the pancreas; and (3) there may be atrophy and calcification signs of the pancreas. With respect to clinical manifestations, that case report suggested that pancreatic atrophy and progressive fibrosis of the pancreas in those patients could cause pancreatic endocrine dysfunction, and thereby result in poor blood glucose control. In addition, it may lead to left portal hypertension, as well as congestive splenomegaly and variceal bleeding. Once a confirmed diagnosis of AIP is made, steroid treatment should be used as early as possible, instead of ignoring it or allowing it for self-remission.

Medical imaging modalities play a vital role in the diagnosis and differential diagnosis of AIP patients. In 2011, the 14th International Pancreatic Association formulated the international diagnostic criteria for AIP[3], which describe typical diagnostic characteristics of AIP from six aspects, including imaging of pancreatic parenchyma, pancreatic duct imaging, serological findings, extrapancreatic lesions, histology, and hormonal therapy response. Also, evidence-based medicine emphasizes a need of imaging evidence for the AIP diagnosis. In clinical settings, the majority of AIP cases can be identified by imaging. Firstly, diffuse AIP often shows diffuse pancreas enlargement with a reduced "sausage"-like density on computed tomography (CT) images[4] (Figure 1A), which is caused by the infiltration of a large number of lymphocytes and the proliferation of fibrous tissue in the lesion sites. The density of pancreatic lesions is uniform, and contrast-enhanced scan often shows moderate enhancement (Figure 1B and C). Interestingly, peripancreatic fat spaces become smaller and make the periphery of the pancreas form a low-density cystic edge, which is called "halo-ring sign" or "capsule sign"[5]. In addition, contrast-enhanced scan can better show the capsule structure than plain scan, and it shows mild enhancement of the capsule during the venous or delayed phase. In contrast, this sign is rare in ordinary chronic pancreatitis or pancreatic cancer. Furthermore, smooth stenosis at the lower end of the common bile duct can be shown in AIP patients with obstructive jaundice[6]. Second, the mass-type AIP often shows a low density or iso-density mass in the head of the pancreas on plain CT scan. On contrast-enhanced CT, slight enhancement of the lesion could be seen in the arterial phase and obvious uniformity and delayed enhancement in the venous phase. The manifestation of contrast-enhanced magnetic resonance imaging (MRI) is similar to that of contrast-enhanced CT (Figure 1D-F). As for the pancreatic duct, the main pancreatic duct of AIP patients is usually irregularly narrow and interrupted, and the involved range is consistent with pancreatic lesions. It should be noted that this kind of stenosis often exceeds 1/3 of the total length of the main pancreatic duct or appears as "a jumping stenosis"[7], whereas patients with pancreatic ductal adenocarcinoma have limited pancreatic duct stenosis and interruption. In fact, to our best of knowledge, a few AIP patients without aforementioned typical imaging findings were misdiagnosed as common chronic pancreatitis. More importantly, radiological features of some AIP cases are especially similar to pancreatic cancer findings, which are easy to be misdiagnosed as pancreatic cancer for surgical treatment. According to previous data[8], about 27% of AIP patients were misdiagnosed as having suspicious pancreatic cancer and underwent Whipple resection. Indeed, this will delay the precious opportunity of effective hormone therapy for AIP patients. Therefore, early and correct imaging diagnosis is very critical for both asymptomatic and symptomatic AIP patients. 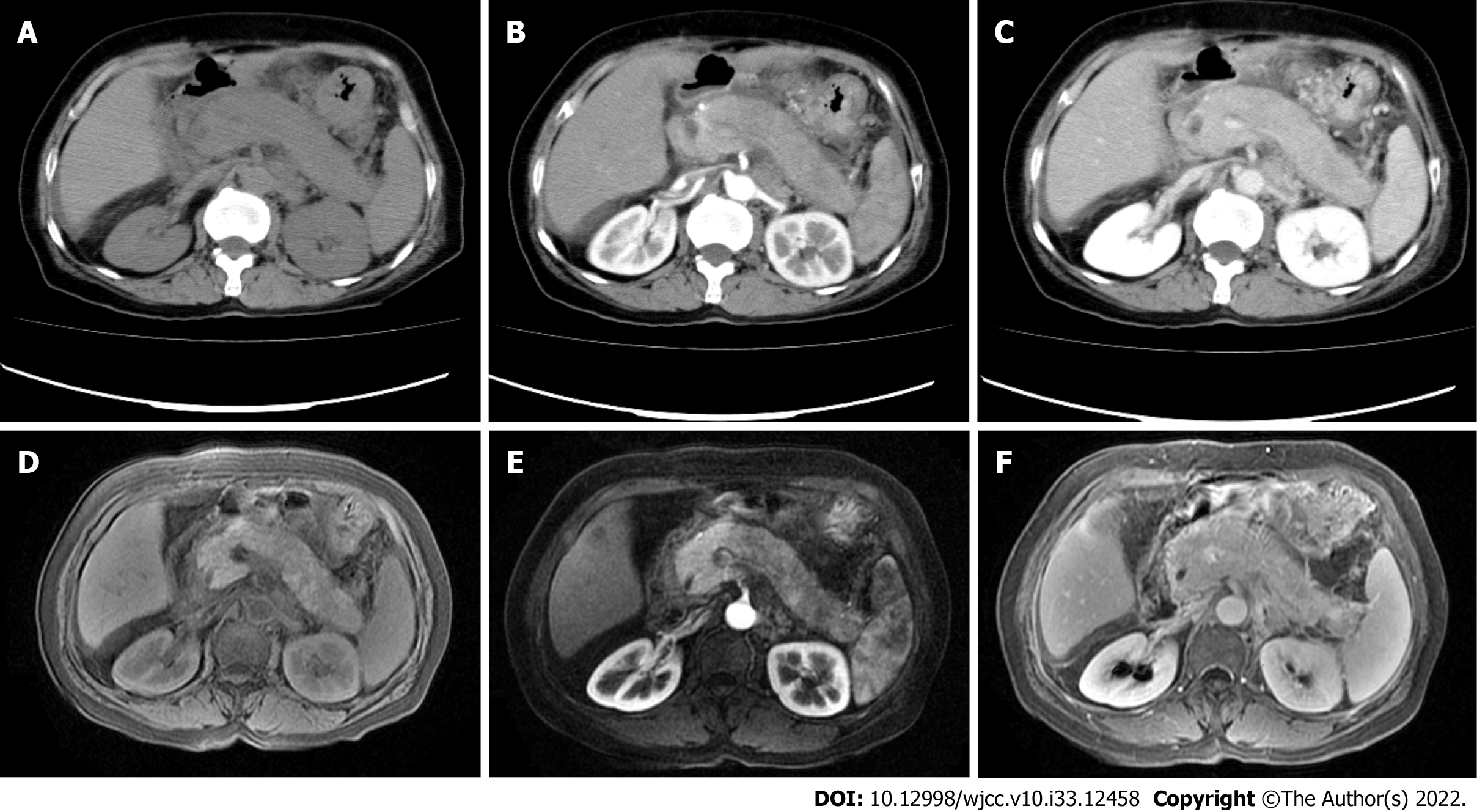 Based on this case report, we would like to put forward the following five aspects of consideration. First, it is unknown whether some characteristic changes of AIP images are related to spontaneous remission of AIP patients. Second, key radiological differences between asymptomatic and symptomatic AIP patients should be summarized. Third, it is possible to dynamically evaluate the prognosis of AIP patients through imaging. Fourth, the relationship between changes of serum indicators and the imaging manifestation of AIP is also interesting. Fifth, if the patients received steroid treatment according to evidence-based guidelines, the correlation between following imaging features and recurrence of AIP is not completely clear. The above points will be the directions of future research.

To sum up, from the perspective of benefits for AIP patients, most AIP cases are sensitive to steroid hormone therapy. Hence, early diagnosis and timely treatment with steroid drugs should be advocated, regardless of symptomatic or asymptomatic AIP. The majority of AIP patients have a good prognosis, but they need to be followed up through imaging and laboratory examinations for a long time to evaluate possible late complications. Only in this way, AIP patients will get the best benefits through continuous exploration of imaging diagnosis and prognosis evaluation of AIP.