A 6-year-old girl suffering from long-term vaginal leakage was admitted on June 10, 2018. She was diagnosed with complete duplication of both kidneys and ureters and ectopic opening of both ureters combined with ureterovaginal fistula. The patient received laparoscopic ectopic ureteral bladder replantation and was followed up for 2 years. No renal function damage and vaginal leakage were found.

Laparoscopic bladder-ureter reimplantation could effectively determine the location and number of ectopic ureters by imaging and cystoscopy.

Core Tip: This paper reported a rare case of bilateral complete duplication of renal pelvis with ectopic bilateral ureteral openings. The diagnosis was confirmed by imaging contrast examination and cystoscopy staining test, and the bilateral ectopic openings were successfully repaired by laparoscopy. This study provided a reference for clinicians to improve the diagnosis and treatment experience of such cases in the future.

Duplication of renal pelvis is a rare congenital malformation of the urinary system[1]. The incidence of duplication abnormality was not significantly different between the left and right renal pelvis, but it was more commonly seen in females[2]. Clinically, most patients are diagnosed with urinary tract infection, hydronephrosis, dysuria, leakage of urine, abdominal pain, and other manifestations, while about 60% of the patients have no obvious clinical symptoms[3-5]. Surgery is the most common treatment for this condition.

Herein, we described a single case with bilateral duplication with double ureteral orifice ectopic vaginal fistula. Although preoperative examination confirmed that the ectopic opening of the left repeated ureter was in the vagina, the opening and lower segment of the right repeated ureter were clear. Therefore, laparoscopic operation was selected to prevent postoperative omission caused by the right ureteral ectopic opening. During the operation, double ureters were detected at bilateral iliac vessels. Preoperative ureteral catheters reserved in normal bilateral ureters played an important role in helping surgeons to determine which one was a double ureter.

On June 10, 2018, a 6-year-old girl was admitted to our Hospital due to prolonged vaginal leakage since birth. The girl was previously treated in several hospitals. Considering that the child was young, no further definite diagnosis was made.

The history of family special diseases were denied.

No morphological abnormality of the vulva, no obvious redness in the external orifice of the urethra, and no obvious secretion in vagina and urethra were observed. The vaginal orifice was moist, and a small amount of liquid, which was clear and accompanied by urine odor, flew out every minute.

Intravenous: pyelography (IVP) suggested a bilateral duplex kidney (Figure 1). Magnetic resonance urography (MRU) indicated multiple lesions in the upper pole of the right kidney, pelvic effusion, double pelvis, and double ureter duplication (Figure 2). Moreover, abdominal enhanced computed tomography (CT) combined with CT urethrography (64 slices) suggested the presence of bilateral duplex kidneys (double pelvis, ureter). A right upper duplication of ureteropelvic malformation with full course of dilatation (cystic dilatation of the pelvic segment) was shown, and the end of the malformed pelvic ureter leaked into the vagina (Figure 2). Urocystoscopy (7.5 Fr) revealed that the only ureteral opening was on both sides of the urethral crest and normal urine spurted from both sides of the opening. A catheter was indwelled and 300 mL methylene blue diluted solution were then injected into the bladder. No obvious blue staining was observed in vaginal leakage within 30 min. 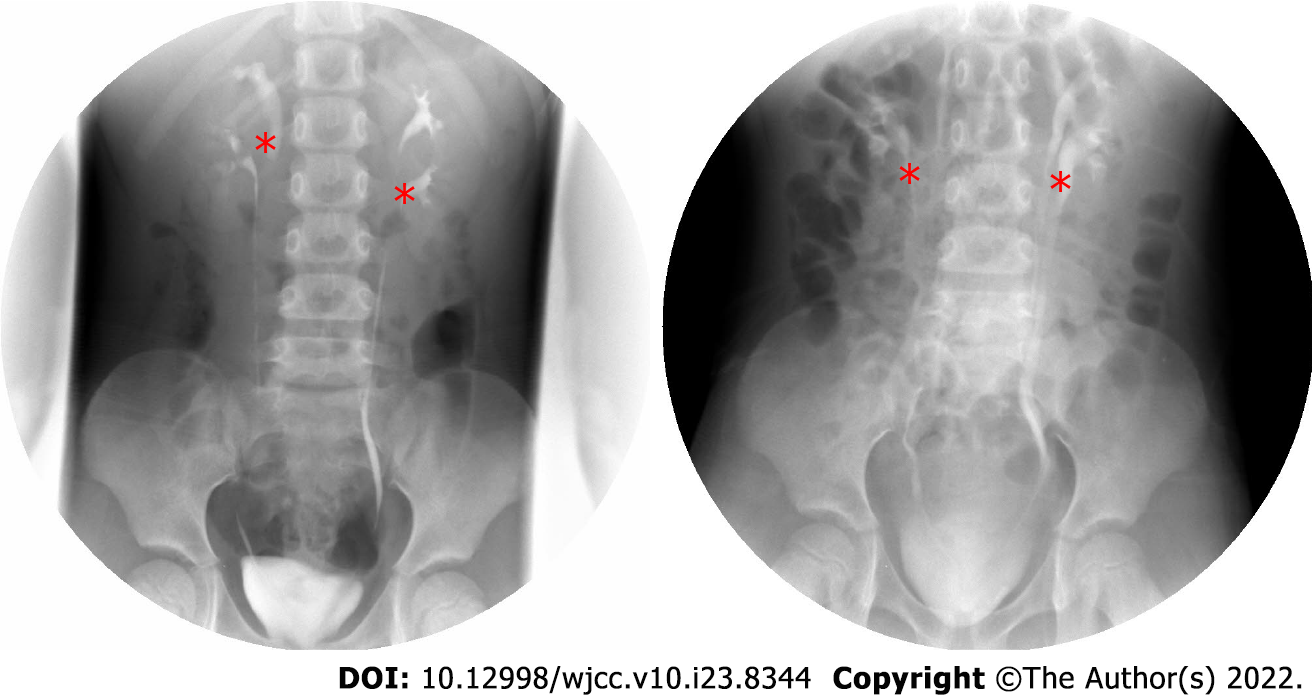 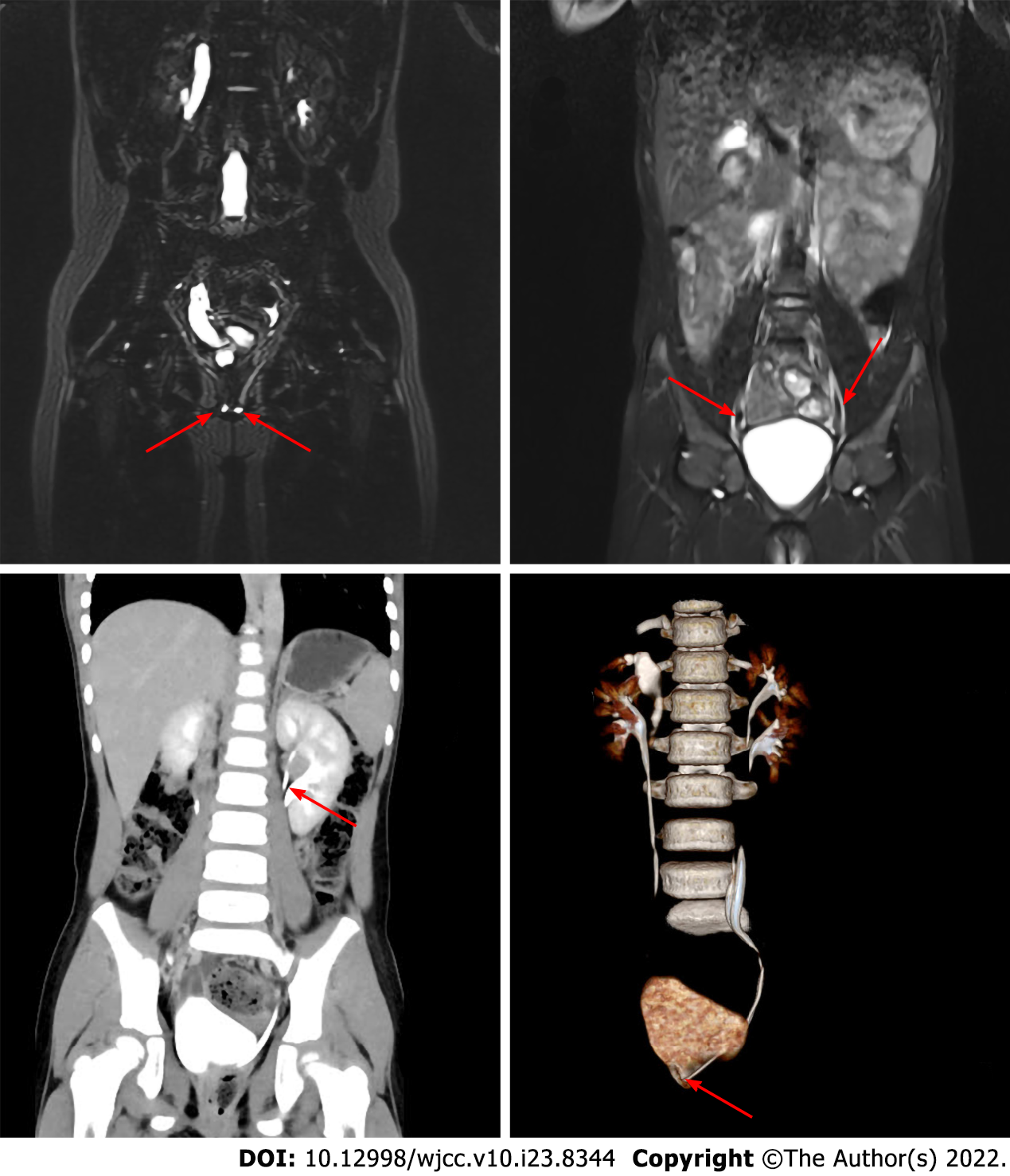 After repeated discussions among the doctors from the urology and radiology departments, the following diagnoses were considered: (1) Complete duplication of both kidneys and ureters; and (2) ectopic opening of both ureters combined with ureterovaginal fistula.

The patient was required to fast for at least 6 h before the operation. Dexamethasone sodium phosphate (1 mL: 5 mg) was intravenously injected half an hour before the operation to eliminate preoperative stress; diclofenac sodium suppository (12.5 mg) anal plug and cefuroxime sodium (0.75 g) intravenous drip were given immediately after preemptive analgesia to prevent infection. A 10% glucose injection (100 mL: 10 g) was given 2 h before operation to eliminate insulin stress. Then laparoscopic bilateral ureteral exploration, laparoscopic bilateral ectopic ureteral bladder reimplantation, and transurethral cystoscopic bilateral ureteral stent (D-J tube) implantation were performed following general intravenous anesthesia (7% sevoflurane inhalation, propofol emulsion injection 160 mg/h, sufentanil citrate injection 200 μg/h, and vecuronium injection 200 μg/h). First, a lithotomy position was taken. Povidone-iodine solution (100 mL: 5 g) was used to disinfect the perineal area. A 9 Fr cystoscope was then installed, and a 5 Fr ureteral catheter was retrogradely inserted into normal bilateral ureters. The patient was then placed in a supine position. Povidone-iodine solution (100 mL: 5 g) was used to disinfect the operation area (from the upper part to the nipple line, from the lower part to the upper third of the thigh, and from both sides to the posterior axillary line). Consequently, laparoscopic exploration of bilateral ureters was performed. The ureter without a ureteral catheter was dissociated and severed. Then the distal ureter was ligated, a 4.7 Fr ureteral stent was inserted into the proximal ureter, and the ureter and bladder were reimplanted (Figure 3 showing the operation details). Finally, the ureteral catheter in normal bilateral ureter was removed, and a10 Fr double-lumen balloon catheter was inserted. The operation was successful. Intraoperative blood loss was about 5 mL, the operation lasted 167 min and the patient returned to the ward after anesthesia. 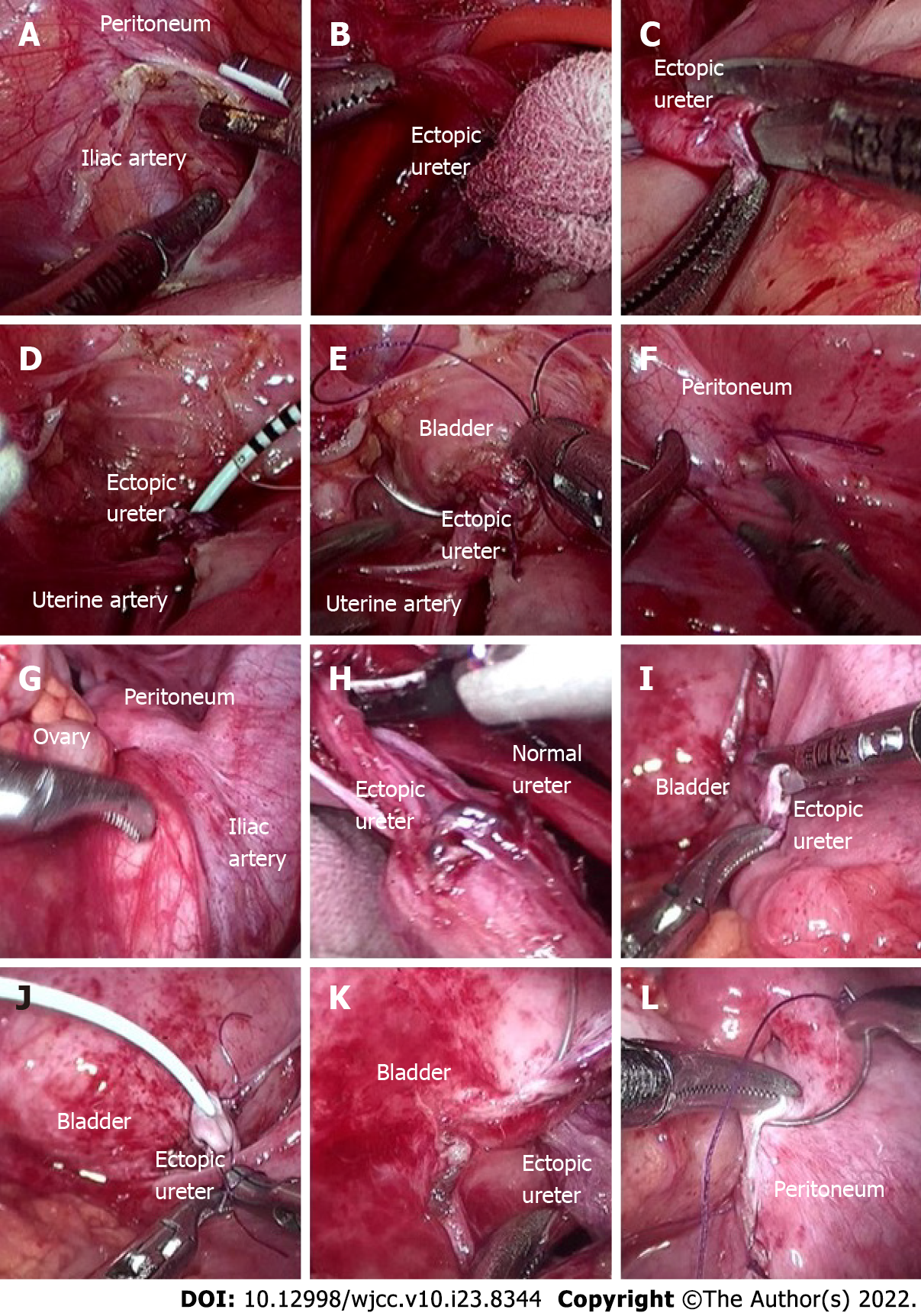 Figure 3 Intraoperative imaging. A-F show left ureter operation, and G-L show right ureter operation. The operation process of right and left side was similar. A: The peritoneum was cut beside the iliac artery; B: Two parallel ureters on the left side were found and dissociated; C: The ectopic ureter was cut off, and the broken end was trimmed. The 1.5 cm ureter was turned out in sleeve shape to form "nipple"; D: A 5 Fr ureteral stent (D-J tube) was inserted through the broken end of the ureter; E: The bladder was filled with 200 mL normal saline through the catheter. Then the ectopic ureter was completely released from the pelvic peritoneal, the lateral posterior wall of the bladder was fully incised about 1.0 cm, and the urine in the bladder was sucked out. Then, the ureteral "nipple" was completely inserted into the bladder through the incision of the lateral posterior wall of the bladder. Finally, 4-0 absorbable suture was used to intermittently suture the bladder incision and ureteral "nipple", with a total of 4-6 stitches. One or two stitches were used to reinforce the bladder seromuscular layer; F: 4-0 absorbable suture was used to continuously suture the pelvic peritoneal incision, and the bladder ureteral anastomosis was wrapped outside the peritoneum.
OUTCOME AND FOLLOW-UP

There was no vaginal leakage following catheter removal on the 15th day after operation. One month after surgery, bilateral ureteral stents were removed under general anesthesia. Pathological results (BL1900110, Figure 4) revealed that the wall of the sample tube was lined with urothelium, with little inflammatory cell infiltration and vascular congestion. Intravenous pyelography (IVP, Figure 1) was reexamined 3 mo after the operation. Double pelvis and double ureter were abnormal, the ectopic ureter was unobstructed, and there was no hydronephrosis in the renal pelvis. The child was followed up for 2 years. No renal function damage and vaginal leakage were found.

Most (about 60%) patients with duplication of renal pelvis and ureter have no obvious and typical clinical symptoms[11]. Patients are accidentally identified when they visit the hospital due to repeated urinary tract infections, hydronephrosis, dysuria, repeated vaginal/rectal leakage, and unexplained lumbo-abdominal pain[12]. Because most patients may not show obvious symptoms for life, they can be followed-up regularly. However, for patients with obvious symptoms, several surgical procedures have been developed, including ureterovesical anastomosis, ureteropelvic anastomosis, upper half nephrectomy, and upper ureterectomy[13,14]. Yet, it is still controversial whether the whole length of duplication of the ureter should be removed as the retention of the ureteral stump may cause recurrent urinary tract infection after the operation, and complete resection of repeated ureter increases the risk of ureter injury.

Although the ectopic ureteral orifice may be accompanied by repeated pyeloureter[15], it can be easily missed by routine examination such as abdominal CT scan and color Doppler ultrasound of urinary system[16]. This makes it difficult to locate the ectopic ureteral orifice during operation, especially the rare double kidney and double ureter malformation combined with ectopic vaginal orifice of bilateral repeated urinary catheter, as observed in this case. Due to ectopic ureteral opening in the vagina, patients often have symptoms such as repeated leakage of urine, perineal ulceration, repeated urinary tract infections, which seriously affect treatment, even endanger life, so timely identification and early surgical treatment are needed[17]. For patients with ureteropelvic duplication and ectopic ureteral orifice, it is critical to determine the location and number of ectopic ureteropelvic orifices before operation. We recommended detailed preoperative examination and evaluation such as intravenous pyelography (IVP) to determine the course of the ureter, cystoscopy and methylene blue staining to determine the ectopic position of ureteral orifice, MRU to determine the basic shape of the whole urinary tract, and CT enhanced three-dimensional reconstruction, etc. These test results can visually display the shape of both kidneys and ureters and evaluate the course of ureter and the position and number of ureter openings before operation, in order to help clinicians to make clinical decisions. In this case, although the left ureteral orifice was located in the vagina before operation, the lower segment of the right ureter was not clearly displayed. In order to prevent missed lesions, laparoscopic operation was selected to explore the ureter at bilateral iliac vessels during operation. Therefore, it is very important to reserve catheter in bilateral normal ureter before operation, which can help surgeons to identify a duplicate ureter. Laparoscopic ectopic ureteral bladder reimplantation can reduce the trauma of open surgery on children, postoperative bleeding, urinary cysts, renal function decline, hypertension, omental hernia and other complications through refined surgical techniques[18-23].

In this case, the operation time (167 min) was not different from that of unilateral operation (137 ± 38 min)[20,24], but the child could benefit from only one anesthesia. However, the same bilateral operation require was very demanding on the operator because there was no need to change the body position and increase the operation channel[24]. There were no complications such as hypertension, urinary tract infection with fever, urinary cyst and loss of lower renal function[8].

Laparoscopic ureteral bladder reimplantation is widely used in clinic practice[18,19,24]. It is critical to determine the location and number of ectopic ureteral openings by various examinations before operation. Laparoscopy has the advantages of minimal invasiveness and rapid recovery, but its effectiveness has not been established by large data evaluation. We searched PubMed, CNKI and other databases, and found only a few reports of laparoscopic repair in patients with bilateral repeat ureteropelvic and bilateral ectopic ureteropelvic malformations. Therefore, the case reported herein had clinical value and significance.