A 60-year-old-woman was referred to our department because of multiple abdominal masses after open splenectomy for idiopathic thrombocytopenic purpura 29 years earlier. All the masses showed marked fluorodeoxyglucose (FDG) uptake on 18F-fluorodeoxyglucose positron emission tomography (18F-FDG-PET) and were strongly suspected to be malignant tumors. Surgical biopsies were performed, and the abdominal masses were found to be aligned vertically, three in a row, along the tissue layers cut in the patient’s previous surgery. Pathological finding of the specimens showed foreign body granuloma consisting of histiocytes and multinucleated giant cells accumulating around needle-like crystals. The crystals were confirmed as phosphoglyceride by Raman spectroscopy, and PCDD was diagnosed. To our knowledge, this is the first report of PCDD diagnosed by Raman spectroscopy.

We made a definitive diagnosis of PCDD in a patient with multiple tumors showing marked FDG uptake on 18F-FDG-PET by incisional biopsy and compo- sition analysis using Raman spectroscopy, a method that has not previously been reported for the diagnosis of PCDD.

Core Tip: Here, we report a case in which Raman spectroscopy proved useful for differential diagnosis of phosphoglyceride crystal deposition disease (PCDD) in a patient with multiple malignant abdominal masses showing extremely high uptake on 18F-fluorodeoxyglucose positron emission tomography, many years after undergoing open splenectomy. Initially, we strongly suspected the masses to be malignant. To rule out malignancy, we performed surgical biopsies and the pathological diagnosis was foreign body granulomas with crystal deposition. Raman spectroscopy led to the definitive diagnosis of PCCD. Raman spectroscopy is a simple and precise method for diagnosing PCCD.

In phosphoglyceride crystal deposition disease (PCDD), which is a rare acquired disease regarded as a type of lipid metabolism disorder, phospholipid crystals deposit in bone and soft tissue and histiocytes and giant cells accumulate around these deposits to form foreign body granulomas[1,2]. PCDD most frequently occurs at sites of scar formation due to trauma, surgery, or repeated injections. In previous reports, phosphoglyceride has been identified by the gold hydroxamic acid method, X-ray microanalysis, and microstamping mass spectrometry[1]. Clinically, on 18F-fluorodeoxyglucose positron emission tomography (18F-FDG-PET), phosphoglyceride deposits have been reported to show a maximum standardized uptake value (SUVmax) ranging from 13.6 to 26.0[3,4]. Here, we report a case of PCDD showing extremely high uptake on 18F-FDG-PET in which Raman spectroscopy led to a definitive diagnosis of PCCD.

The patient was a 60-year-old woman being treated with prednisolone 1 mg orally for idiopathic thrombocytopenic purpura (ITP) at the hematology department of our hospital.

She had undergone open splenectomy for ITP 29 years before and had been treated with steroids since then.

The tumor can be palpated by palpation of the abdomen. In addition, it is not considered as a special place.

Blood tests showed a low platelet count of 49 × 103/μL, normal tumor markers including sIL-2R (258 U/mL). She was therefore referred to the Department of Gastrointestinal Surgery for definitive diagnosis. We had a high index of suspicion for malignant tumors, thus performed incisional biopsy. 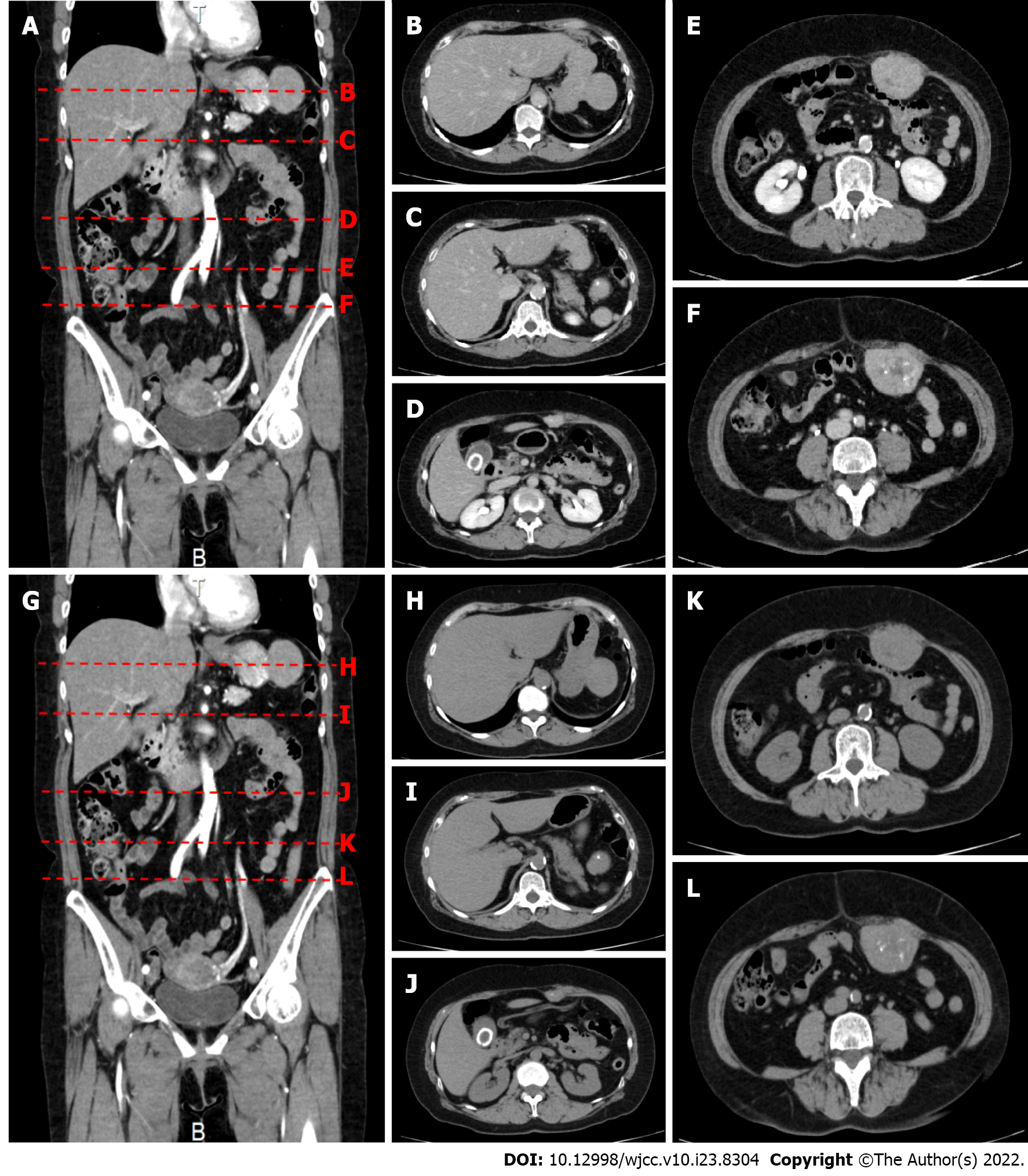 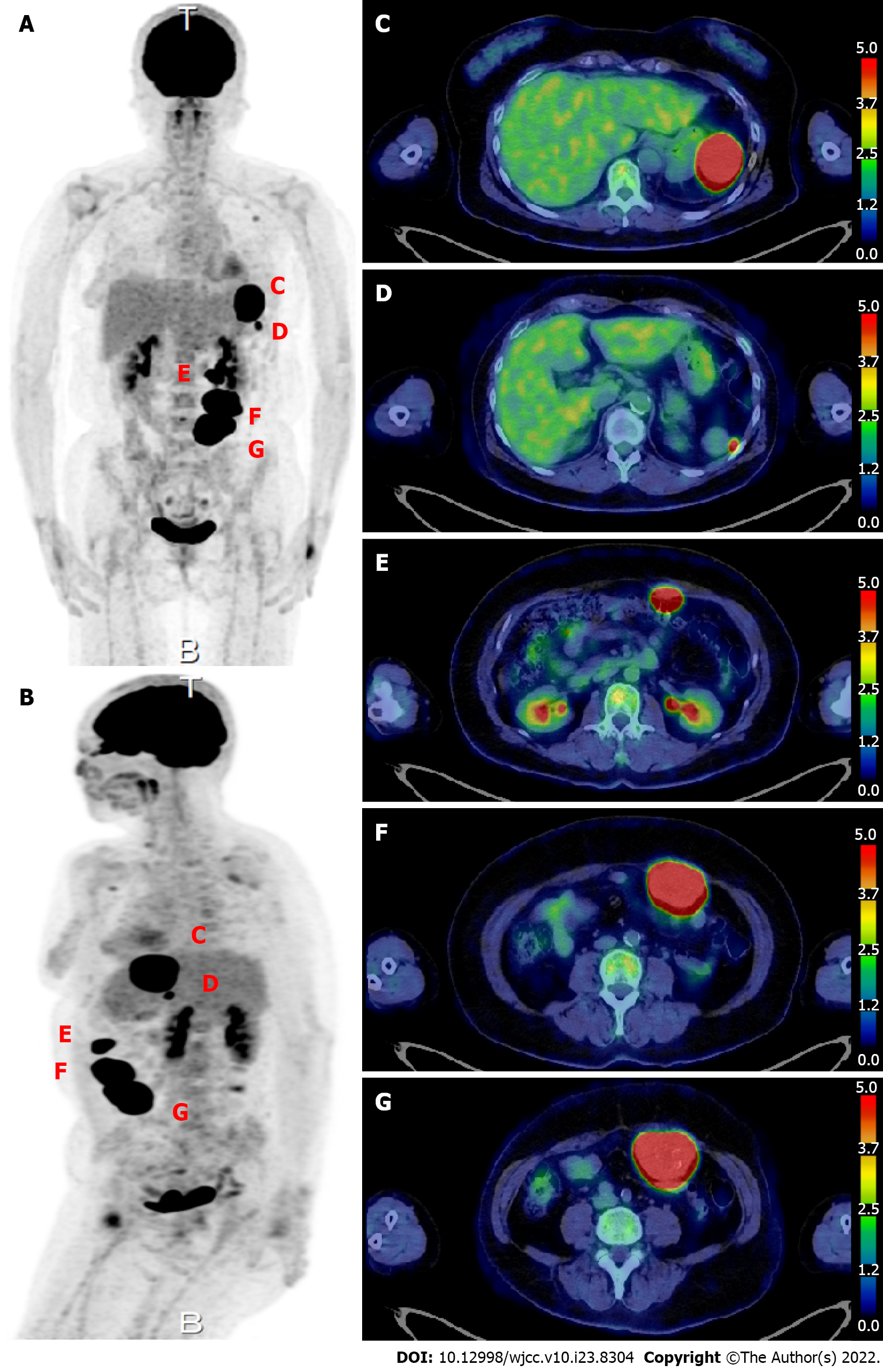 An incision of approximately 5 cm was made along the scar from the previous pararectal incision (Figure 3). Dissection of the tissue revealed a hard, elastic, whitish mass. Histopathological findings of the surgical specimens showed a well-demarcated nodule surrounded by a fibrous capsule, with histiocytes and multinucleated giant cells accumulating around needle-like crystals (Figure 4). There were almost no mitotic figures (< 1/10 HPF). Immunostaining showed histiocytes were CD68+ and the Ki67 labeling index was 4.4% (hotspot method). Based on these finding, the initial diagnosis was foreign body granulomas with crystal deposition. Next, we analyzed the crystals by Raman spectroscopy (Via Reflex, JEOL Ltd., Tokyo, Japan). The formalin-fixed, paraffin-embedded tissue was set on a silicon substrate and the stromal area without crystal deposition was set as a control. The conditions for Raman spectroscopy were as follows: Laser irradiation power, ≤ 5 mW; Raman shift range, 200-4000 cm-1; wavenumber resolution, 6 cm-1; and number of integrations, 10. Major peaks in the target area spectrum were observed at 1000-1300 cm-1, indicating P-O and P=O bonds of phosphate (partially overlapping with the alkyl group signal); 1400-12800 cm-1, indicating C-H bonds of saturated hydrocarbon groups; 1600-13800 cm-1, indicating C=C bonds of unsaturated hydrocarbon groups, and 1700 cm-1, indicating C=O bonds of esters (Figure 5). Finally, the crystals were identified as phosphoglycerides. The spectrum acquired in the control area appeared to be attributable to proteins, whereas the spectrum of the target area predominantly had a Raman signal attributable to phospholipids. 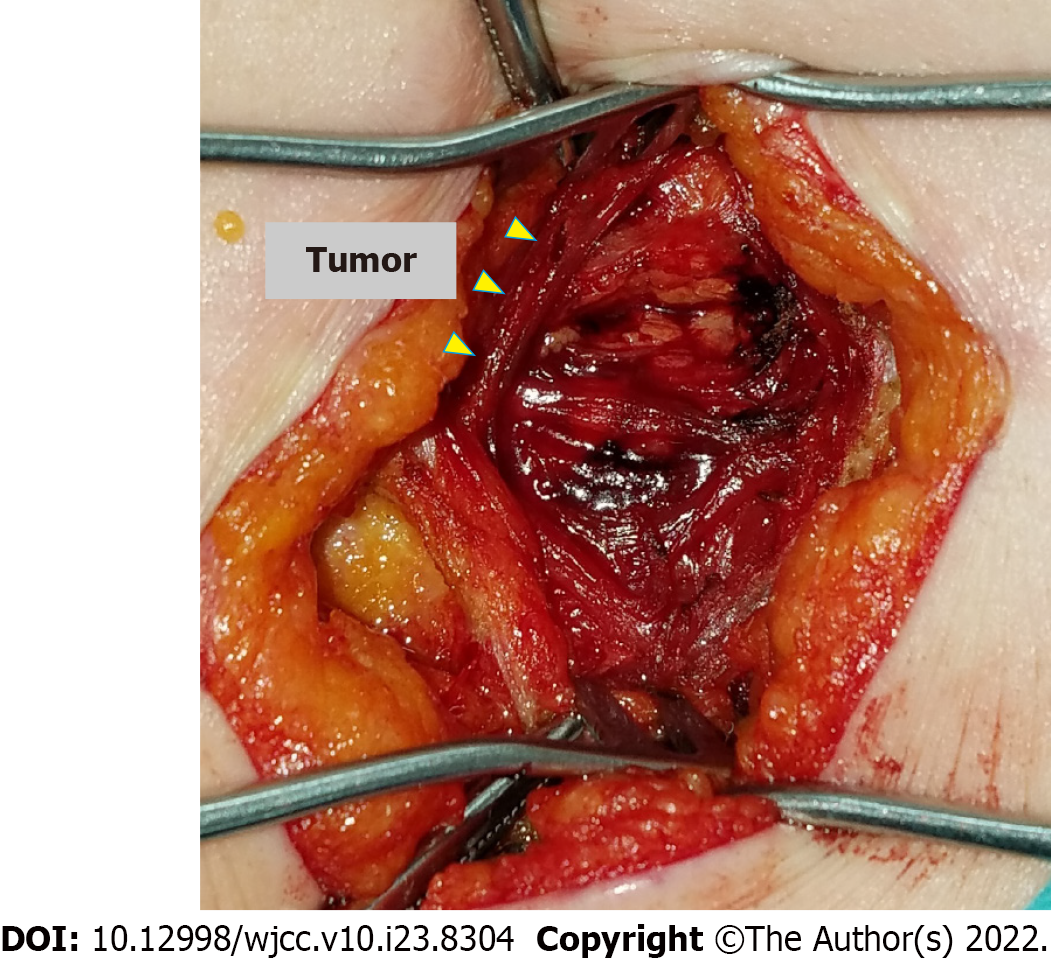 Figure 3 An intraoperative photograph shows an incision of approximately 5 cm made at the scar from the previous pararectal incision. Dissection of the tissue reveals a hard, elastic, whitish mass, from which two 2-cm portions are excised.

Figure 4 Histopathological findings of the surgical specimens. A and B: Histopathological findings show a well-demarcated nodule of needle-like crystals surrounded by a fibrous capsule, with histiocytes and multinucleated giant cells (hematoxylin and eosin stain; A: × 200; B: × 400); C: Histiocytes are immunohistochemically positive for CD68 (× 200). 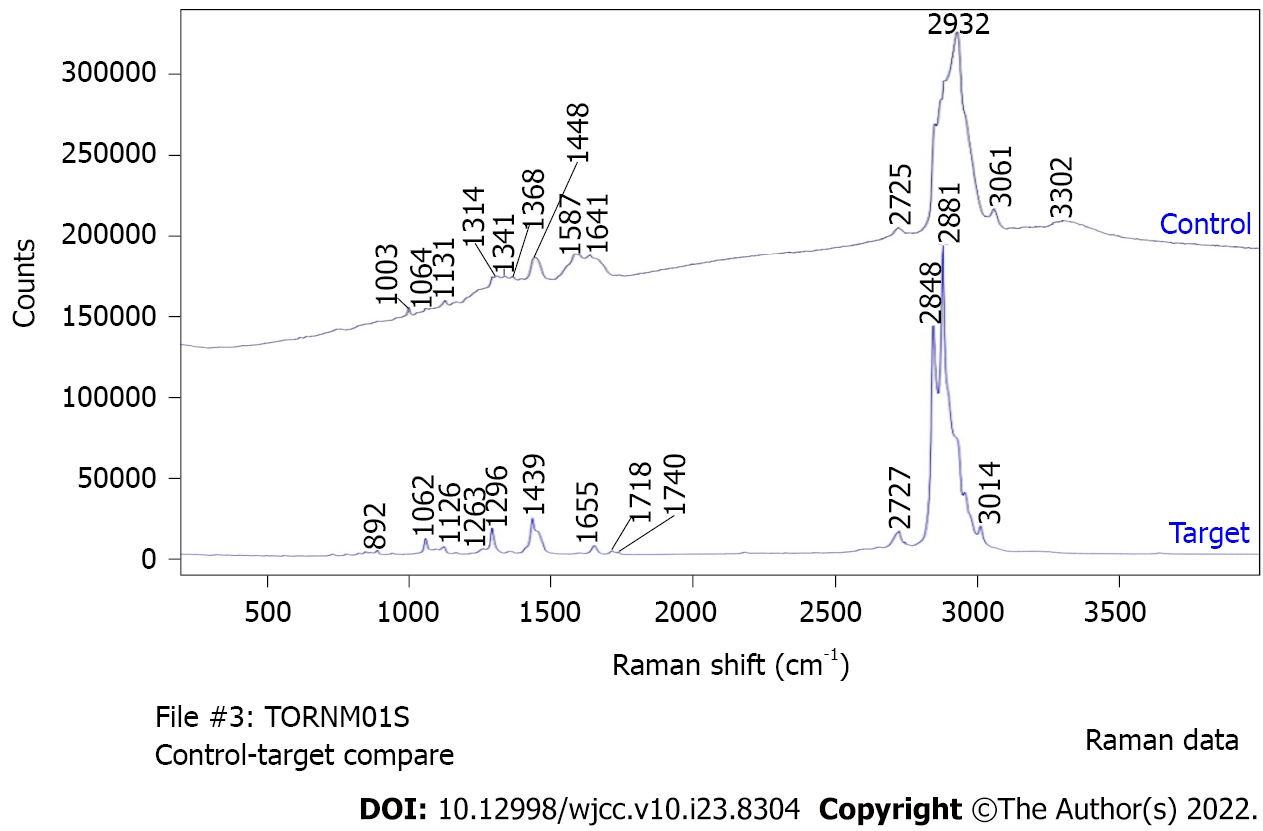 After that, there was no particular change, and the patient was being followed up at the outpatient department.

We encountered a patient with PCDD who had multiple masses spread across skin incision scars and areas within the peritoneal cavity due to splenectomy performed 29 years earlier. We initially suspected the masses were malignant tumors because of marked FDG uptake and performed incisional biopsy. The pathological diagnosis was foreign body granulomas with crystal deposition, and identification of the crystals by Raman spectroscopy finally led to the definitive diagnosis of PCDD. To our knowledge, this is the first reported case in which Raman spectroscopy was used to diagnose PCDD.

The FDG uptake in two previous reported cases of PCDD ranged from 13.6 to 26.0[3,4]. Our patient had even higher uptake, ranging from 34 to 37, in all of her many masses. Accordingly, malignant tumors such as sarcomas were the first differential diagnosis considered. However, marked FDG uptake is also observed in benign conditions such as granulomas, and aggregations of inflammatory cells can show FDG uptake similar to that of cancer cells[5]. Nevertheless, it is necessary to make a definitive diagnosis by excision or biopsy whenever 18F-FDG PET shows lesions with marked FDG uptake in order to rule out malignancy first.

Histopathologically, PCDD is characterized by the formation of foreign body granulomas through the accumulation of large numbers of histiocytes and multi-nucleated giant cells around crystals. Yamada et al[6] found that crystals ranged from 50 to 150 μm in diameter and appeared as pink ovals or blue aggregates on hematoxylin-eosin staining, forming corona-like circles. Phosphoglycerides are not the only crystals that can be deposited in soft tissue. Other reported substances included monosodium urate, calcium pyrophosphate dihydrate, calcium oxalate, and cholesterol esters[1]. The simplest way to prove the presence of phosphoglycerides to observe oxygen production after spraying the tissue with acetic acid, but this test is not highly specific. The gold hydroxamic acid method, X-ray microanalysis, and microstamping mass spectrometry are other methods for confirm phosphoglycerides, but they require a great deal of time. A simpler and precise method for analysis of phosphoglycerides was desirable.

In this case, we opted to use Raman spectroscopy for composition analysis of the crystals. Raman spectroscopic analysis is a non-destructive, non-contact, high-resolution, and three-dimensional method and does not require pre-analytical sample preparation. The principle of Raman spectroscopy is as follows. When a substance is irradiated with light, interactions between the light and the substance result not only in reflection, refraction, and absorption of light, but also in a phenomenon called scattering. Two types of light scattering are Rayleigh scattering (elastic scattering), where the scattered light has the same wavelength as the incident light, and Raman scattering (inelastic scattering), where the scattered light has a wavelength different from that of incident light due to molecular vibrations. Light produced by Raman scattering is extremely weak (10−6 times dimmer) compared with that produced by Rayleigh scattering. The Raman spectra produced by this faint diffracted light are used to analyze the molecular structure of substances, and in the present case we could definitively determine the composition of the crystals based their Raman spectra.

We made a definitive diagnosis of PCDD in a patient who had tumors with marked FDG uptake on 18F-FDG PET by incisional biopsy and composition analysis using Raman spectroscopy, a method that has not been previously reported for the diagnosis of PCDD.

We would like to thank Dr. Katsutoshi Miura (Hamamatsu University School of Medicine, Regenerative and Infectious Pathology, Shizuoka, Japan) for useful advises in diagnosis of PCDD, and Ms Takako Fukawa and Ms Megumi Hasegawa (Department of Pathology, Toranomon Hospital, Tokyo, Japan) for preparing tissue. We are also grateful to Mr Hiroshi Terashima (JEOL Ltd, Tokyo, Japan) for his technical advises.