A 35-year-old man was referred to our hospital due to an upper GI hemorrhage. Gastroscopy revealed GV hemorrhage and computed tomography venography (CTV) confirmed LSPH. The patient requested endoscopic procedures and rejected surgical therapies including splenectomy. EUS-guided selective NBC injections were performed and confluences of gastric varices were selected as the injection sites to reduce the injection dose. The “sandwich” method using undiluted NBC and hypertonic glucose was applied. No complications occurred. The patient was followed up regularly after discharge. Three months later, the follow-up gastroscopy revealed firm gastric submucosa with no sign of NBC expulsion and the follow-up CTV showed improvements in LSPH. No recurrent GI hemorrhage was reported during this follow-up period.

EUS-guided selective NBC injection may represent an effective and economical treatment for GV hemorrhage in patients with LSPH.

Gastric variceal (GV) hemorrhage leads to significant mortality in patients with portal hypertension. Although N-butyl-2-cyanoacrylate (NBC) has been widely used in the endoscopic hemostasis of portal hypertension, the early expulsion of NBC and the resultant hemorrhage is not uncommon[5]. Compared with conventional endoscopic injection, endoscopic ultrasound (EUS)-guided procedures in patients with GV bleeding demonstrated better diagnostic capability and clinical efficacy[6,7].

A 35-year-old man was referred to our hospital due to an upper GI hemorrhage.

A few hours before admission, the patient had no apparent reason for one occurrence of sudden vomiting of blood mixed with stomach contents and the amount was estimated to be about 50-100 mL. He denied melena and syncope.

Nine months previously, this patient was admitted to our hospital due to persistent upper abdominal pain. He was diagnosed with severe acute pancreatitis (SAP) and underwent EUS-guided drainage of a pancreatic walled-off necrosis. He also had a 6-year history of hypertension and took enalapril regularly.

This patient had a 10-year smoking history (a pack per day) and has not quit smoking. He denied alcoholism and taking nonsteroidal anti-inflammatory drugs.

After admission, physical examination revealed no abnormality except for 130/91 mmHg blood pressure.

No apparent abnormalities were found in the emergency blood analysis. 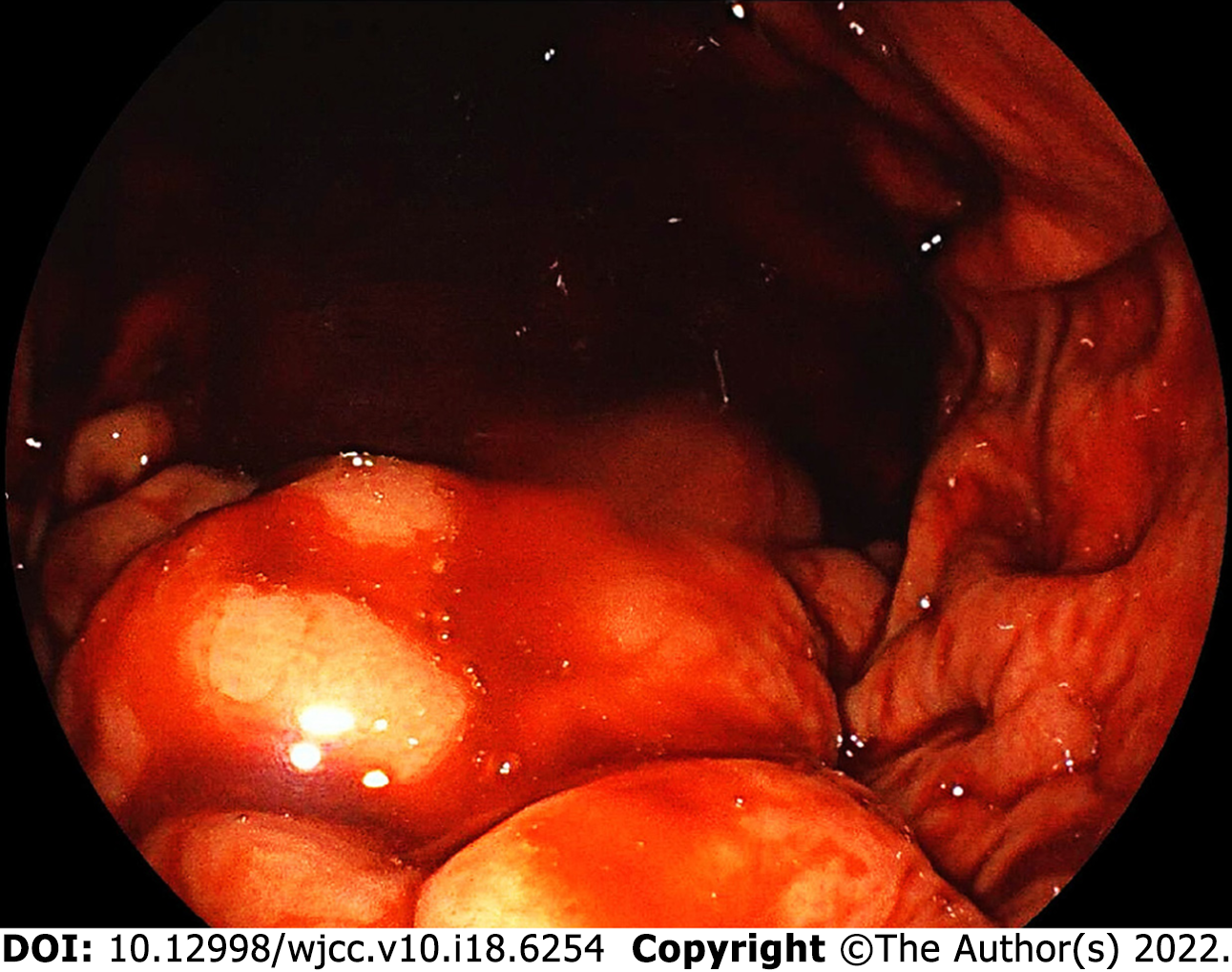 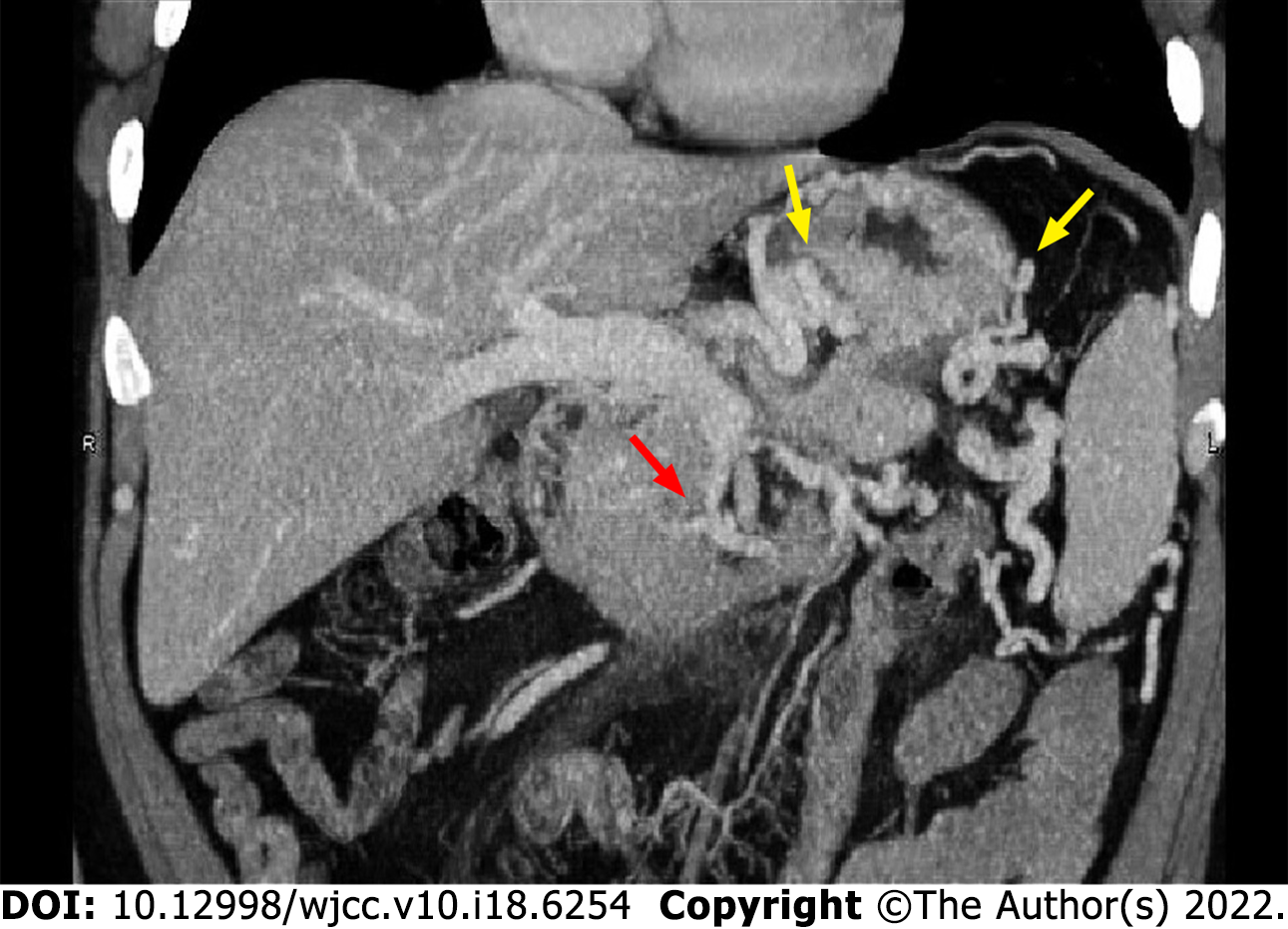 The patient requested endoscopic procedures and rejected surgical therapies including splenectomy. EUS-guided selective NBC injections were performed for the treatment and prophylaxis of GV hemorrhage. 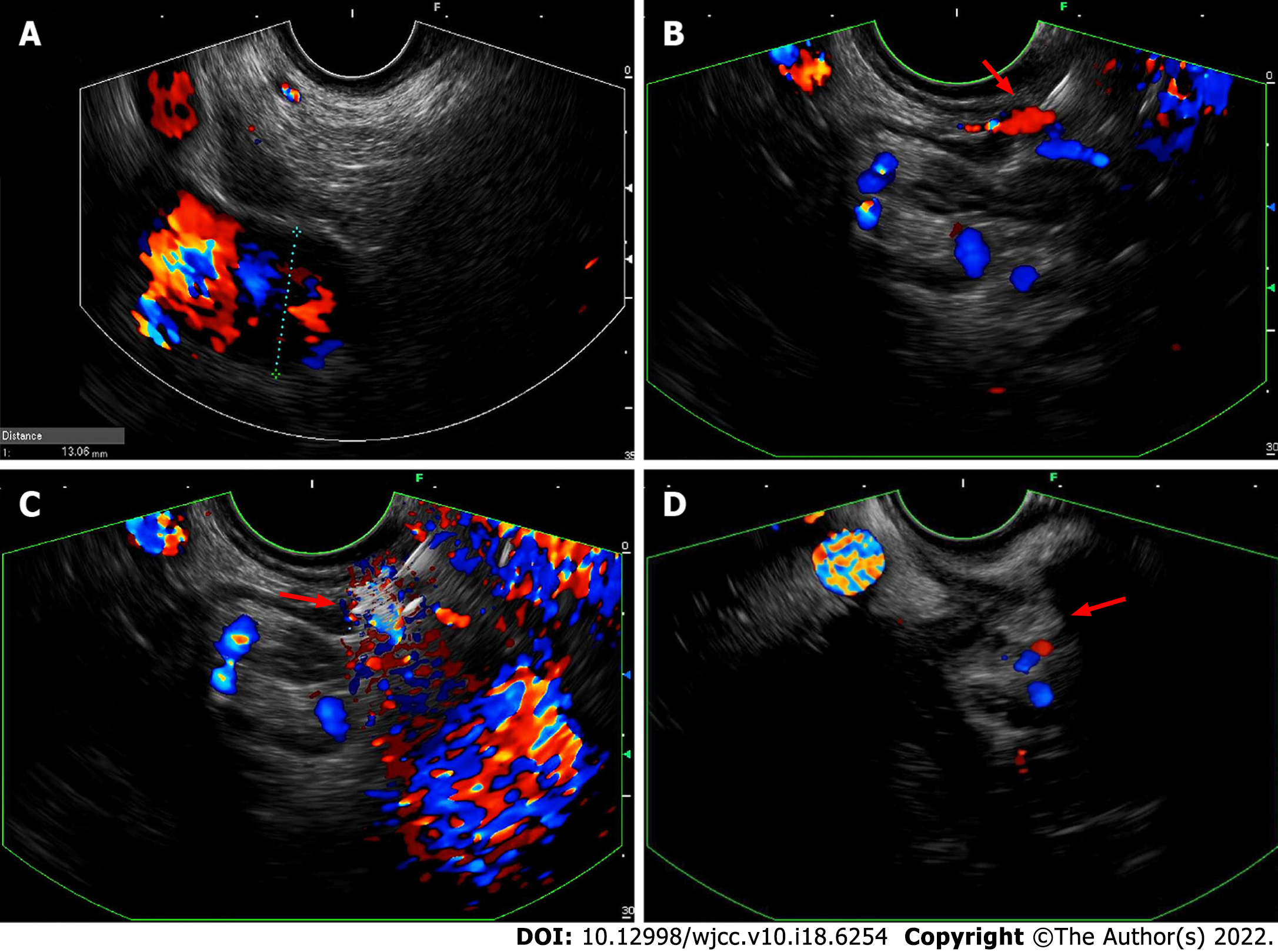 The patient fasted for 1 d after the procedure. No complications, including ectopic embolism, fever and post-injection GI bleeding occurred. The patient was followed up regularly after discharge. Three months later, the follow-up gastroscopy revealed no sign of NBC expulsion (Figure 4) and follow-up CTV showed improvements in LSPH (Figure 5). No recurrent GI hemorrhage and other complications were reported during the 3-mo follow-up. 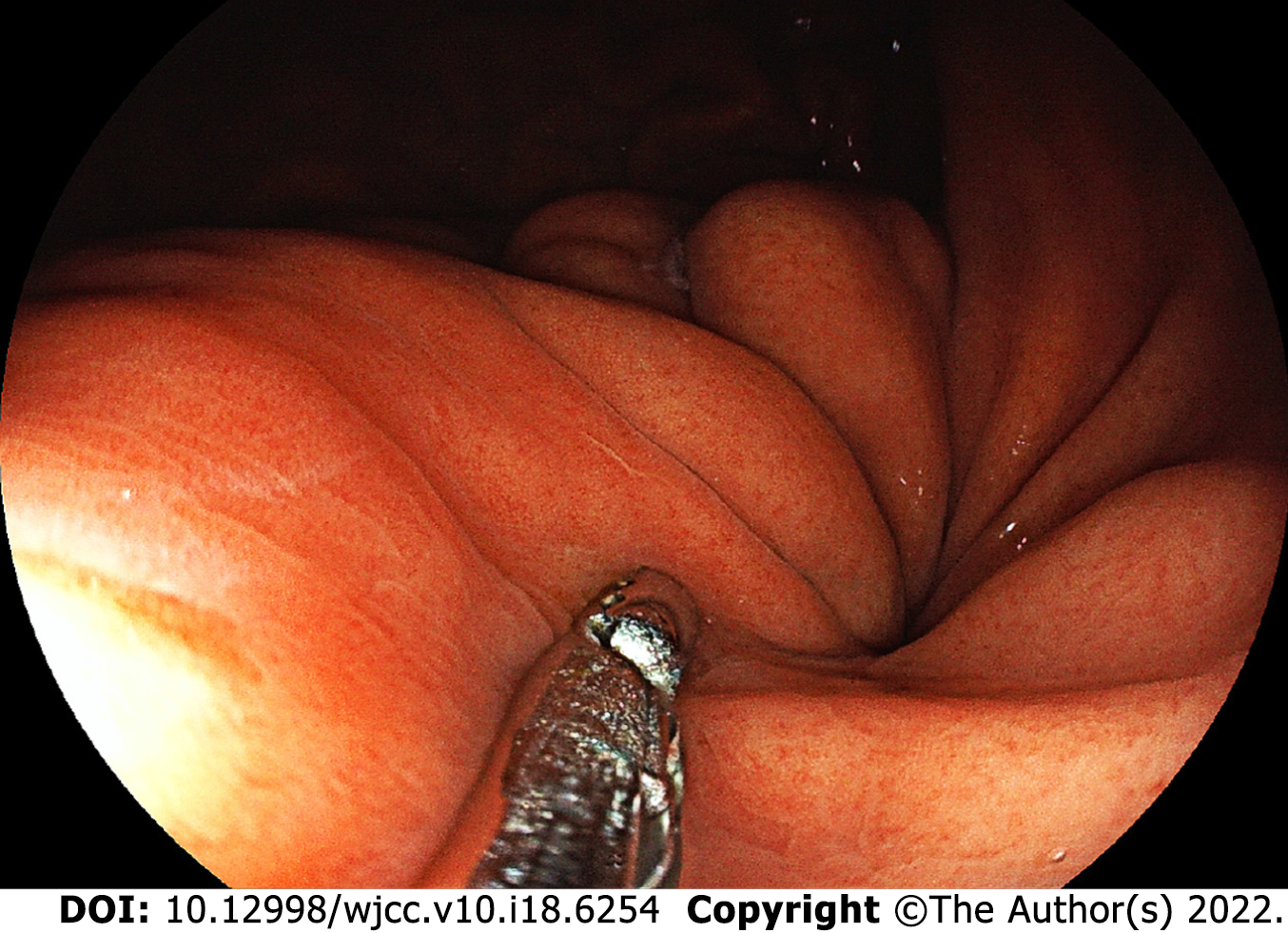 Figure 4 Gastroscopic image. With the help of biopsy forceps, the follow-up gastroscopy revealed firm gastric submucosa and no sign of N-butyl-2-cyanoacrylate expulsion. 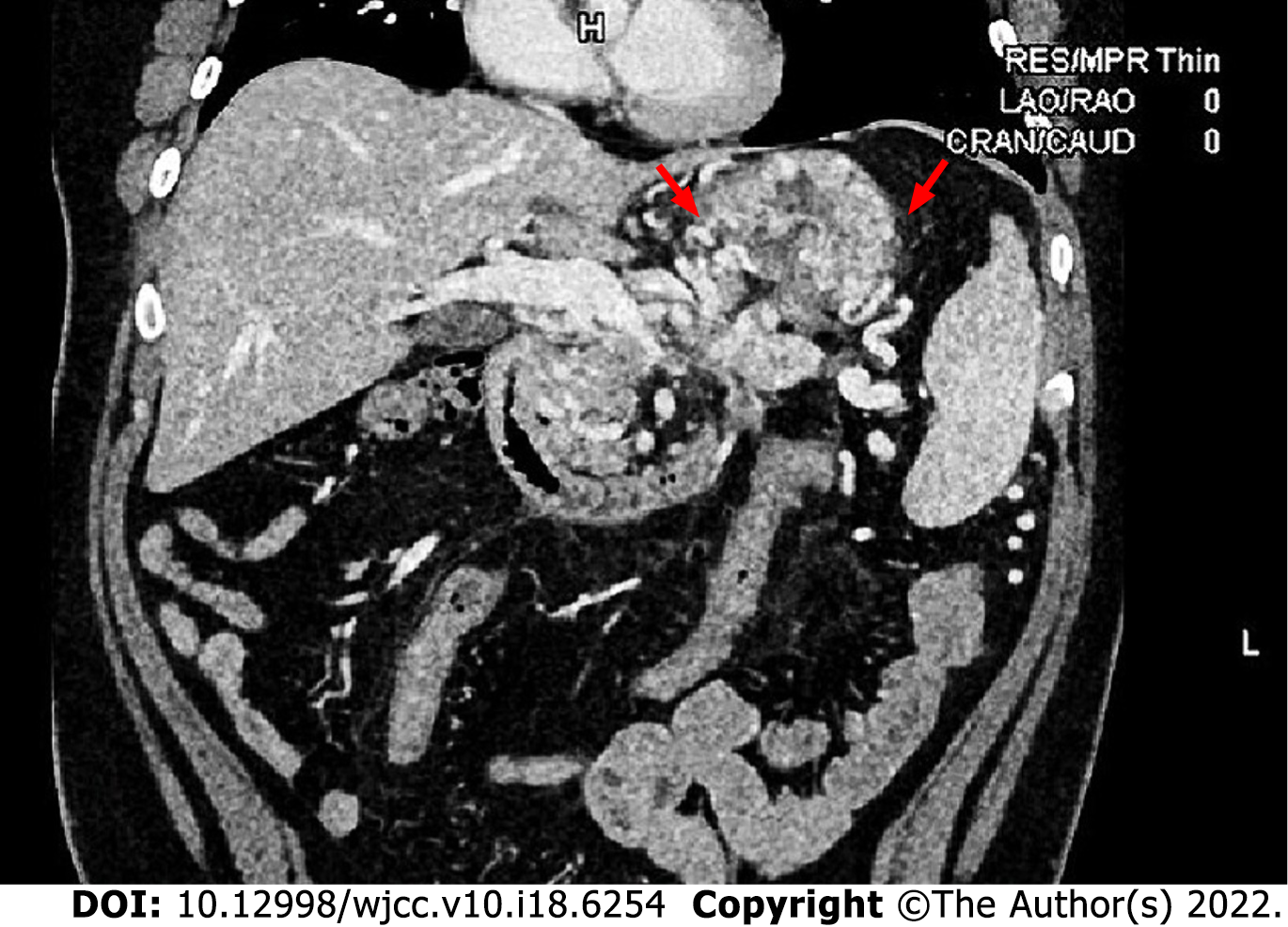 Pancreatic diseases such as pancreatitis and pancreatic tumors are the most common etiology of LSPH[3,8]. The anatomical proximity between the splenic vein and the pancreas makes the splenic vein more susceptible to pancreatic diseases. When pancreatic disease obstructs the splenic vein flow, the pressure of the left portal vein system increases and blood flows retrogradely through the short and posterior gastric veins and the gastroepiploic veins, which would lead to GVs. In patients with acute pancreatitis, infected walled-off necrosis was one of the risk factors for LSPH and early anticoagulation could not wholly prevent its occurrence[8]. In this case, the patient had a history of SAP and infected pancreatic necrosis which may be responsible for his LSPH. About 20% of patients with portal hypertension may develop GVs[9], and although LSPH is a rare cause of upper GI hemorrhage, GV hemorrhage in patients with LSPH secondary to pancreatic disease is not uncommon. Liu et al[10] reported that about 15.3% of LSPH patients had complicated bleeding GVs and the death risk is relatively higher when recurrent GV hemorrhage occurs so this is worthy of attention.

Modified EUS-guided selective NBC injection was applied for three distinct advantages in this present case. First, a reduced NBC dose may result in a lower occurrence of post-operational GI bleeding and ectopic embolism. EUS can also provide the detection of submucosal GVs, their confluences and real-time effectiveness evaluation for GV obliteration[7]. These advantages make it possible to identify and select confluences of gastric varices which were in the direction of bleeding gastric vessels and used as injection sites to reduce the injection dose. Although EUS-guided coil injection is reported superior to conventional NBC injection in terms of rebleeding after treatment[16], it was believed that a reduced dose of NBC would be injected into GVs in the modified EUS-guided selective NBC injection, which would lead to lower chances of post-injection ulcer and GI hemorrhage. Besides, reduced NBC dose may result in a similar lower occurrence of ectopic embolism in selective NBC injection as in the coils-combined injection method and clip-assisted injection method. Second, there would be no additional risk of radioactive exposure; coils and metal clips were not used in this modified injection procedure, which decreased the cost of endoscopic procedures. Third, selective NBC injection demonstrated a faster and firmer obliteration effect in GV hemorrhage than thrombin and absorbable gelatin sponge injections, making NBC injection more suitable than other procedures for acute GV bleeding. NBC rarely causes vascular necrosis and was reported superior to EIS in the hemostasis rate for GV bleeding[17]. Thus, EUS-guided selective NBC injection was performed for this patient based on the above factors and the result was adequate. Despite all these advantages, the operation time of EUS-guided selective NBC injection seemed a little longer than that of conventional endoscopic NBC injection due to time consumption to confirm confluences of GVs during the EUS procedure. Additional cases are needed to verify our findings and compare the efficacies and complications of different embolization methods guided by EUS. Currently, this described technique is recommended to be used only in hemodynamically stable patients. To the best of our knowledge, this case is the first report choosing confluences of gastric varices as injection sites to reduce the injection dose and postoperative complications in patients with LSPH.

Modified EUS-guided selective NBC injection may represent an effective and economical treatment for GV hemorrhage in patients with LSPH.