We report a case of a 64-year-old man who visited the hospital with paroxysmal left-sided numbness and weakness is presented in this study. Computed tomography examination indicated a high-density image of the right frontal-parietal sulcus. Digital subtraction angiography showed severe stenosis at the right anterior cerebral artery A2-A3 junction (stenosis rate approximately 70%).

The findings of this case indicate that anterior cerebral artery stenosis may lead to the occurrence of cSAH.

Core Tip: This is a rare case of convexal subarachnoid hemorrhage (cSAH) with transient ischemic attack as the first presentation. We reported the whole course. This case indicated the clinical characteristics, laboratory findings, imaging examinations and adjustment of treatment and discussed the possible relation between anterior cerebral artery stenosis and the occurrence of cSAH.

Nontraumatic convexal subarachnoid hemorrhage (cSAH) is a subtype of atypical SAH. Its bleeding site is mainly confined to one or more cerebral hemisphere convexocortical sulci with high incidence in the central sulcus. It does not affect the brain parenchyma, basal cistern, or interhemispheric fissure. It is characterized by low hemorrhage, and only the local cerebral cortex is involved. In addition, it is not associated with typical symptoms such as severe headache and meningeal irritation. In the present study, a case of a cSAH patient with transient ischemic attack (TIA) and a summary of relevant literature are presented.

A 64-year-old male was admitted to the hospital after experiencing paroxysmal left-sided numbness and weakness for 4 d.

These symptoms occurred 2-3 times a day and lasted approximately 20 min each time.

The patient had a clinical history of ischemic stroke and no history of hypertension, diabetes, coronary heart disease, or major trauma.

The patient had no history of smoking or drinking, and no family history. 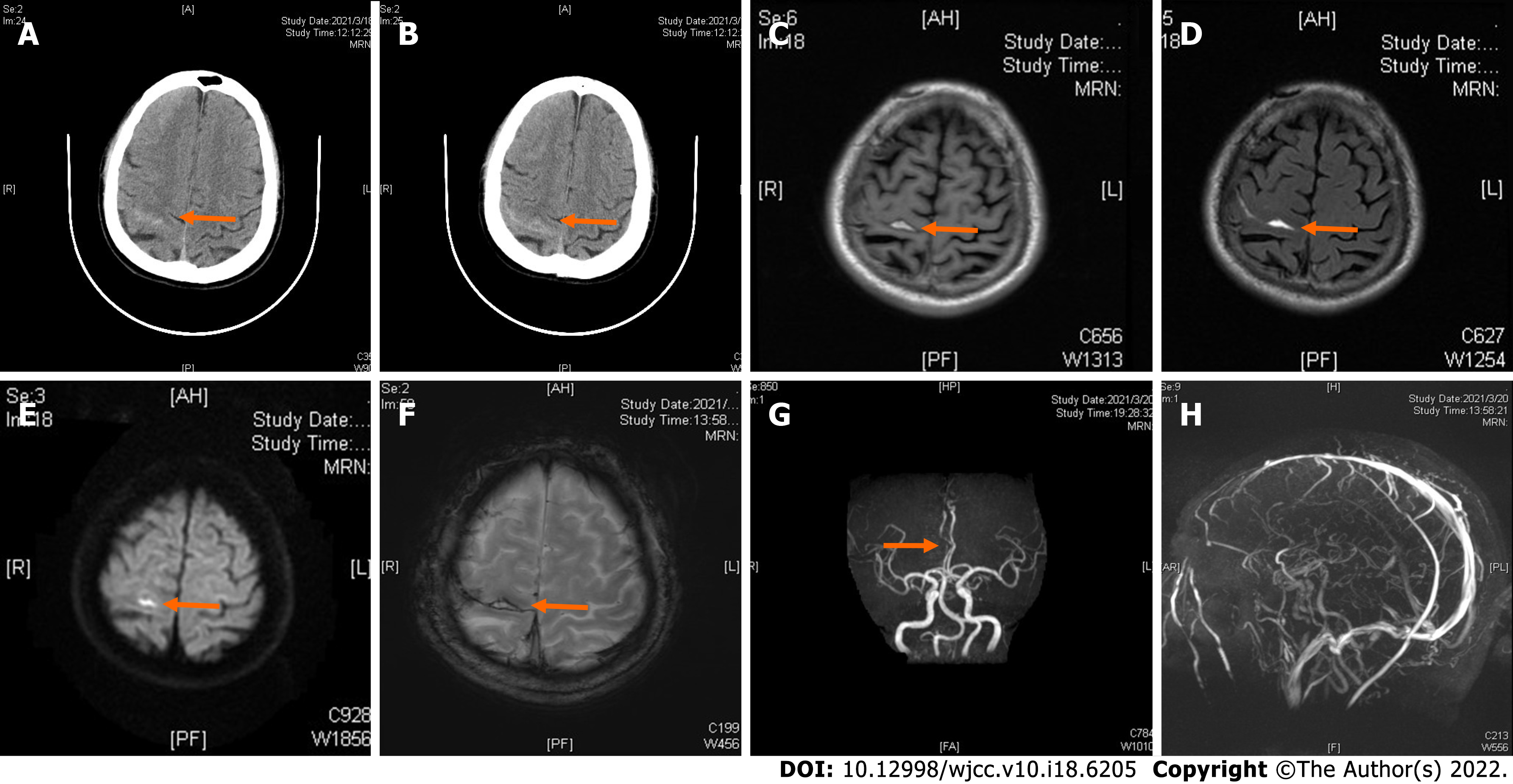 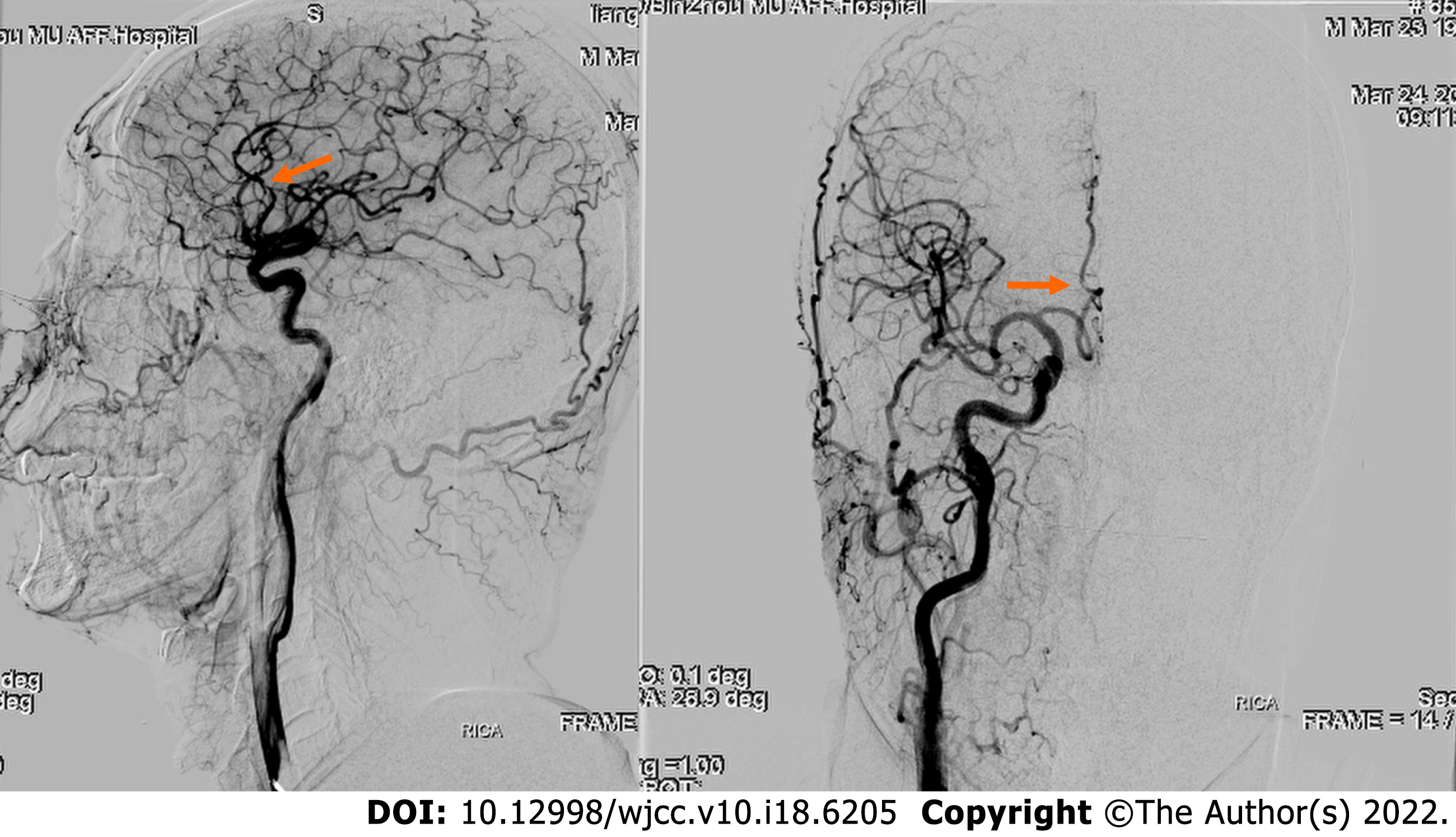 There is no multidisciplinary expert consultation.

The complete evidence supported the final diagnosis of cSAH.

The patient was given blood pressure monitoring, cerebrovascular spasm prevention (nimodipine), cerebral protection, and other treatments.

The range of brain CT-showed bleeding was significantly reduced compared to the previous range after 9 d. The patient had no recurrence of paroxysmal left-sided numbness and weakness.

cSAH is a subtype of atypical SAH. Approximately 49% of patients with SAH present with TIA-like symptoms; therefore, the actual annual incidence is more than 5.1 cases in every 100000 people[1]. The etiology of cSAH is highly correlated with age, hypertension, coronary heart disease, and diabetes. Common causes of cSAH include cerebral amyloidosis (CAA), reversible cerebral vasoconstriction syndrome (RCVS), cortical vein thrombosis (CoVT), intracranial large artery atherosclerosis stenosis or occlusion, moyamoya disease, and vasculitis. Notably, CAA is the main cause, accounting for approximately 39% of all cSAH cases[1]. Transient sensorimotor dysfunction (TFNE) is the main symptom in cSAH patients above 60 years of age, and CAA is the common cause of disease, followed by intracranial atherosclerosis stenosis or occlusion[2,3]. In contrast, headache is the main clinical manifestation in patients under 60 years of age, whereas rCVS and CoVT are the main causes of cSAH in these patients[3]. Nakajima et al[4-5] reported that more than half of patients with cSAH presented with cerebral vascular occlusion and TFNE and were often misdiagnosed with transient cerebral ischemia. Notably, CAA is a progressive age-related cerebrovascular disease. The severity of the disease increases with age due to deposition of amyloid beta protein in the cortex and leptomeningeal vessels, which is the main cause of cSAH. A previous study reported that TFNE is the main characteristic clinical manifestation of CAA-induced cSAH, followed by cortical superficial siderosis (CSS) and rebleeding[6]. The incidence of hypercholesterolemia is lower in patients with CAA-induced cSAH than in patients with TIA. Cholesterol is negatively correlated with the incidence of nontraumatic intracerebral hemorrhage and aneurysmal hemorrhage[5]. Symptoms of cSAH are paroxysmal and include TIA attacks, seizures, and TFNE. This indicates that TIA attacks can occur as a result of ischemic infarction or may occur as a clinical manifestation of hemorrhagic stroke.

A previous study reported that hyperacute arterial ischemic stroke occurs in patients within 4.5 h and 6 days after a concurrent rate of cSAH 0.5%[4]. Acute changes in hemodynamics and damage to the blood brain barrier may be important mechanisms for the occurrence of cSAH. The incidence of SAH is associated with cerebrovascular disease risk factors such as hypertension, coronary heart disease, and diabetes, and this relationship can be explained by collateral circulation. ICA stenosis or occlusion and MCA stenosis or occlusion can promote the formation of Willis circle and the opening of PIA meningostomy vessels, respectively[7-8].

CT scan is important for the diagnosis of cSAH. However, the sensitivity of CT decreases after a period of time. Notably, flair is highly sensitive to hemorrhage in the cerebral convexity cortex sulcus and is more effective in the diagnosis of acute and subacute SAH than plain CT scans. DWI and SWI are characterized by high sensitivity and accuracy in the diagnosis of SAH. Cerebrospinal fluid examination cannot confirm the diagnosis of cSAH; however, it helps in determining the etiology of the disease[9]. Notably, DSA is performed to further confirm the diagnosis when the cause of disease cannot be determined through noninvasive examination. Studies report that cSAH may be a marker of vascular fragility and a major risk factor for future lobar hemorrhage[10]. Cortical or watershed subarachnoid hemorrhage may be the result of excessive cerebral perfusion. High-grade stenosis is always a sign of hemodynamic compromise, and collateral circulation might be a predictor of excessive cerebral perfusion[11]. The clinical and imaging findings of the patient in the present study indicate a positive diagnosis of cSAH and rule out the possibility of CAA. The cause of the disease was initially considered to be atherosclerotic stenosis of the large cerebral artery; however, later severe stenosis of the anterior cerebral artery was considered the cause of the present case. It is speculated that the pathogenesis may be severe stenosis of the anterior cerebral artery, which can cause compensatory dilation and vulnerability of cortical lateral branch vessels in the corresponding region, when hemodynamic changes occur, such as a sudden increase in intracranial perfusion pressure, resulting in the rupture of the leptic lateral branch circulation vessels that have already undergone expansion or increased permeability, resulting in bleeding, or the arrival of embolus to the fragile collateral vessels causing blood vessel rupture and causing a small amount of bleeding, which as indicated by DSA examination. Intracranial artery stenosis/occlusion caused by cSAH is common in MCA. In summary, the findings of the present study indicate that ACA stenosis may lead to the occurrence of cSAH.

cSAH is treated using different treatment strategies depending on the cause of the disease. Antiplatelet therapy is used for intracranial artery stenosis or occlusion caused by arteriosclerosis, nimodipine is administered for reversible cerebral vasoconstriction syndrome, and steroid hormone is given for the treatment of vasculitis. Symptomatic therapy for cSAH includes reduction of intracranial pressure, anti-epilepsy drugs, and administration of drugs for lowering blood pressure. The prognosis of cSAH depends on the cause, and most patients present with good prognosis. However, CAA-induced intracranial hemorrhage is recurrent and associated with poor prognosis[12].

Symptoms of cSAH are complex and not easily detected during clinical investigations. The cause of the disease should be explored to minimize missed diagnosis and misdiagnosis.