Article-Type of This Article
Systematic Reviews

Mycobacterium species (Mycobacterium sp) is an emerging cause of hip and knee prosthetic joint infection (PJI), and different species of this organism may be responsible for the same.

To evaluate the profile of hip and knee Mycobacterium PJI cases as published in the past 30 years.

A literature search was performed in PubMed using the MeSH terms “Prosthesis joint infection” AND “Mycobacterium” for studies with publication dates from January 1, 1990, to May 30, 2021. To avoid missing any study, another search was performed with the terms “Arthroplasty infection” AND “Mycobacterium” in the same period as the previous search. The Preferred Reporting Items for Systematic Reviews and Meta-Analyses chart was used to evaluate the included studies for further review. In total, 51 studies were included for further evaluation of the cases, type of pathogen, and treatment of PJI caused by Mycobacterium sp.

At least 17 Mycobacterium sp can be responsible for hip/knee PJI. Although M. tuberculosis is the most common causal pathogen, NTM should be considered as an emerging cause of hip/knee PJI.

The incidence of prosthetic joint infection (PJI) has increased with an increase in the number of patients undergoing total joint arthroplasty, particularly hip and knee arthroplasties[1]. The cumulative incidence of PJI after total hip arthroplasty (THA) and total knee arthroplasty remains unclear; however, it is believed to range between 2.05% and 2.18%. The majority of PJI cases are caused by gram-positive cocci such as Staphylococcus aureus and coagulase-negative Staphylococci (60%); however, sometimes they can also be caused by gram-negative bacteria, such as Mycobacteria or fungi[2,3]. Mycobacterial infections account for approximately 2% of all PJI cases[4]. Mycobacterium tuberculosis (M. tuberculosis) is an infrequent cause of PJI, accounting for only 7 cases (0.3%) as reported during a 22-year period at one center[5]. However, in tuberculosis-endemic countries, patients undergoing joint arthroplasty with previous tuberculous septic arthritis are at an increased risk of developing M. tuberculosis complex PJI[1]. Some other Mycobacteria (rapidly growing Mycobacteria) are reported to grow rapidly, and they spread in various environments worldwide[4].

Appropriate management is mandatory to prevent complications that arise from PJI. Successful management of PJI is achieved by a combination of surgical intervention and appropriate medical therapeutic strategies to eradicate infection, reduce pain, restore function, and prevent prolonged antimicrobial therapy in patients[1,2,6]. The diagnosis of mycobacterial infections is often delayed due to the low index of suspicion, clinical and laboratory presentation that mimics bacterial infections, and low yield of smears and culture for acid-fast bacilli. Moreover, mycobacterial infections are often known to occur together with other bacteria, such as coinfection or superinfection[2,6]. Delayed diagnosis and prevention of PJI can lead to prolonged illness with various dangerous manifestations that can threaten the patient’s life. Although Mycobacteria are not among the common causative agents of PJI, it is important to recognize and treat them differently from non-mycobacterial infections. The aim of this study was to identify and evaluate the profile of PJI cases due to mycobacterial infection in the hip and knee as published over the past 30 years.

A literature search was performed using MeSH terms on PubMed from January 1, 1990, to May 30, 2021. The following two search scenarios were used accordingly: “Prosthesis joint infection AND Mycobacterium” and “Arthroplasty infection AND Mycobacterium”. The articles were screened based on the Preferred Reporting Items for Systematic Reviews and Meta-Analyses statement.

The following inclusion criteria were used in our systematic review: (1) Clinical studies; (2) All levels of evidence; and (3) PJI of the hip or knee due to any Mycobacterium species (Mycobacterium sp). Studies were excluded if they met any of the following criteria: (1) Non-English articles; (2) PJI not involving the hip or knee joint; (3) Primary Mycobacterium hip/knee osteoarticular infection prior to arthroplasty; (4) Articles published in abstract form only; (5) Review articles; and (6) Technique articles.

Three authors (Santoso A, Phatama KY, and Rhatomy S) independently screened the titles and abstracts of the included studies. The first search with the terms “Prosthetic joint infection AND Mycobacterium” revealed 54 records. Of these, 6 records were excluded for not being in English, 5 for presenting primary osteoarticular hip/knee infection, 2 for presenting shoulder/elbow PJI, 1 for presenting wound infection after THA without involvement of the joint, and 3 for unavailability of the full-text articles. The remaining 37 records were included in the further analysis. The second search method was performed with the words “Arthroplasty infection AND Mycobacterium”, which revealed 56 records. Of these, 33 records were excluded for duplicating previous search results, 4 for presenting primary hip/knee osteoarticular infection, 1 for presenting shoulder PJI, 1 for being a non-English article, 2 for being review articles, and 1 for unavailability of the full-text article. Thus, 14 records were finally included from the second search in the analysis. Considering the 37 records from the first search and 14 from the second search, a total of 51 records were included in the final analysis (Figure 1). The analysis included type of study, demographics, number of patients, hip or knee PJI cases, Mycobacterium sp strain, treatment, and outcomes of the mycobacterial PJI cases (Table 1). Furthermore, we performed a descriptive comparison between PJI caused by M. tuberculous (n = 43) and nontuberculous mycobacteria (NTM) (n = 63). This comparative evaluation excluded all cases of mixed infections of M. tuberculous and NTM (n = 1), NTM and Staphylococcus species (Staphylococcus sp) (n = 2), and M. tuberculous and Staphylococcus sp (n = 6). Two cases with no data 5 regarding the specific species of Mycobacteria were also excluded at this stage (Table 2). Comparative analysis of categorical data was performed using the chi-square test. 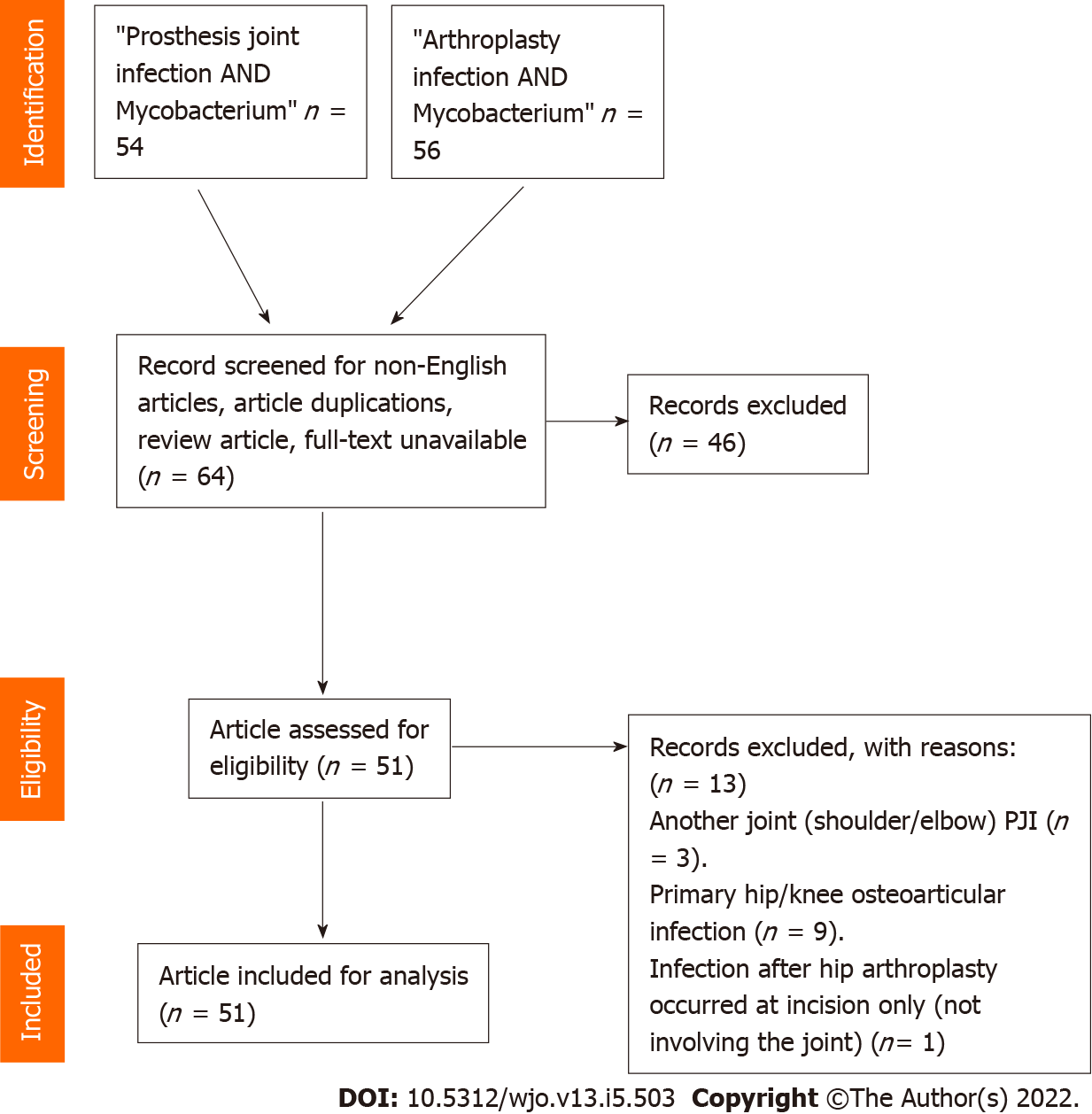 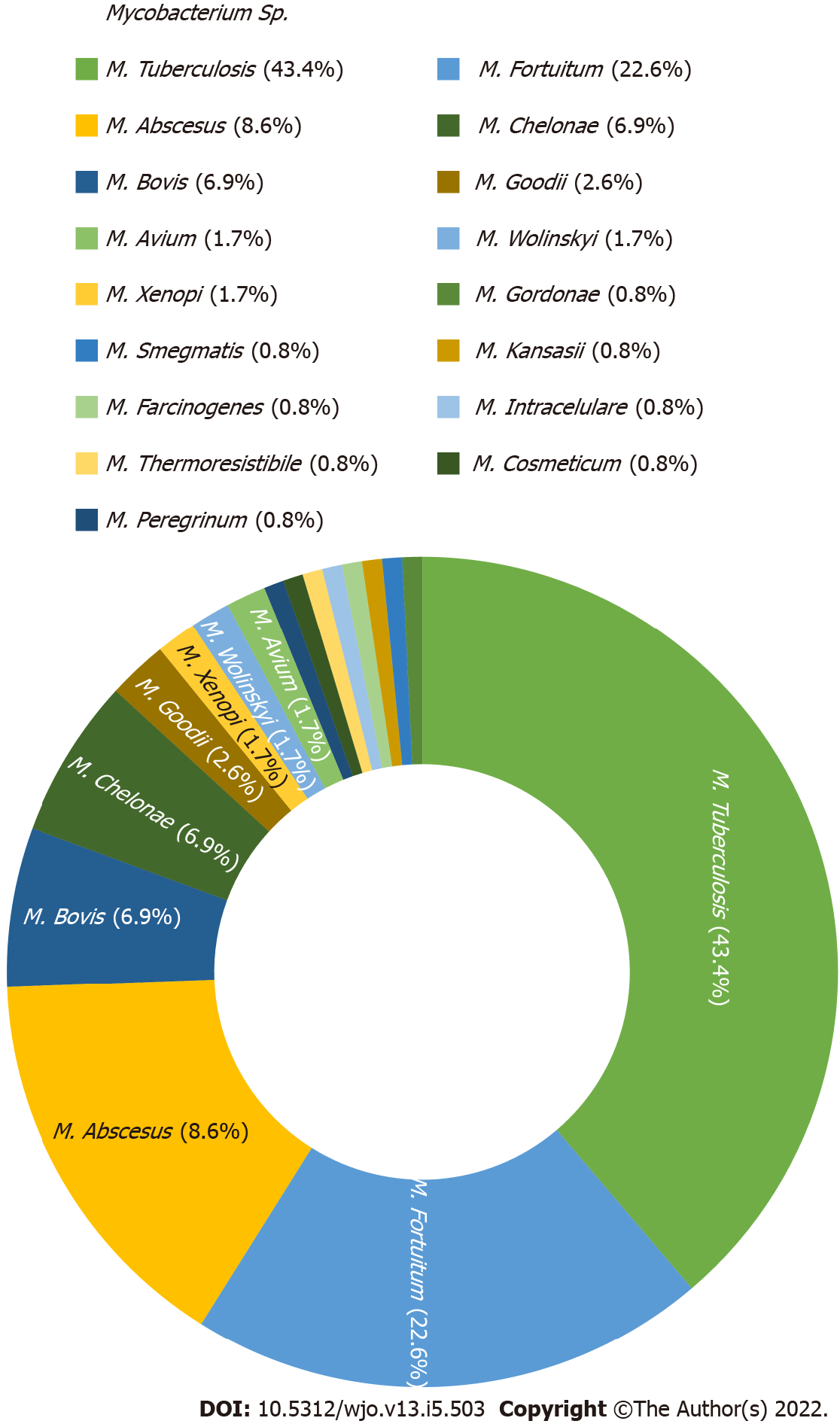 Figure 2 Distribution of Mycobacterium strains as the cause of hip/knee prosthetic joint infection (n = 115). M.: Mycobacteria. 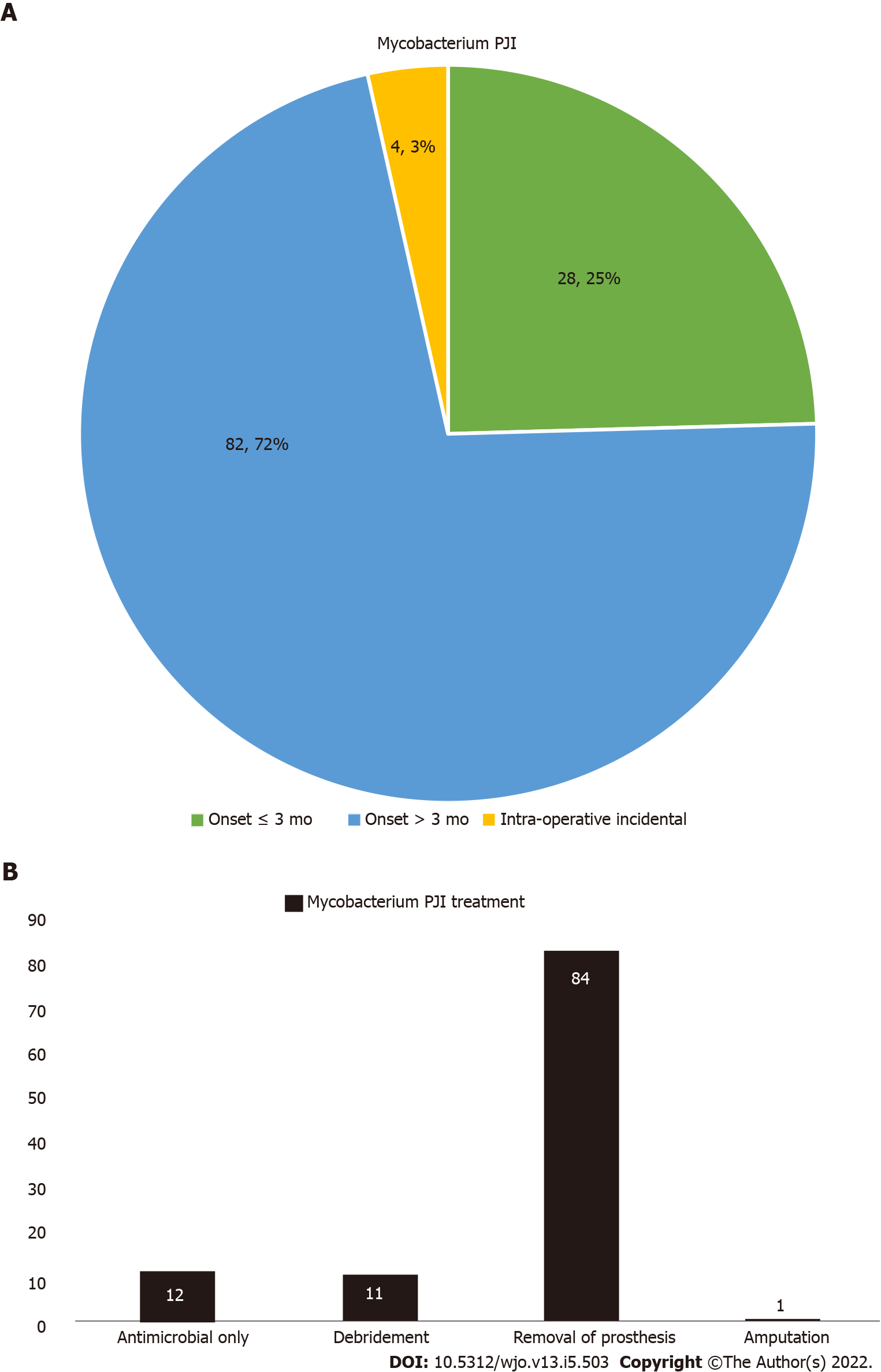 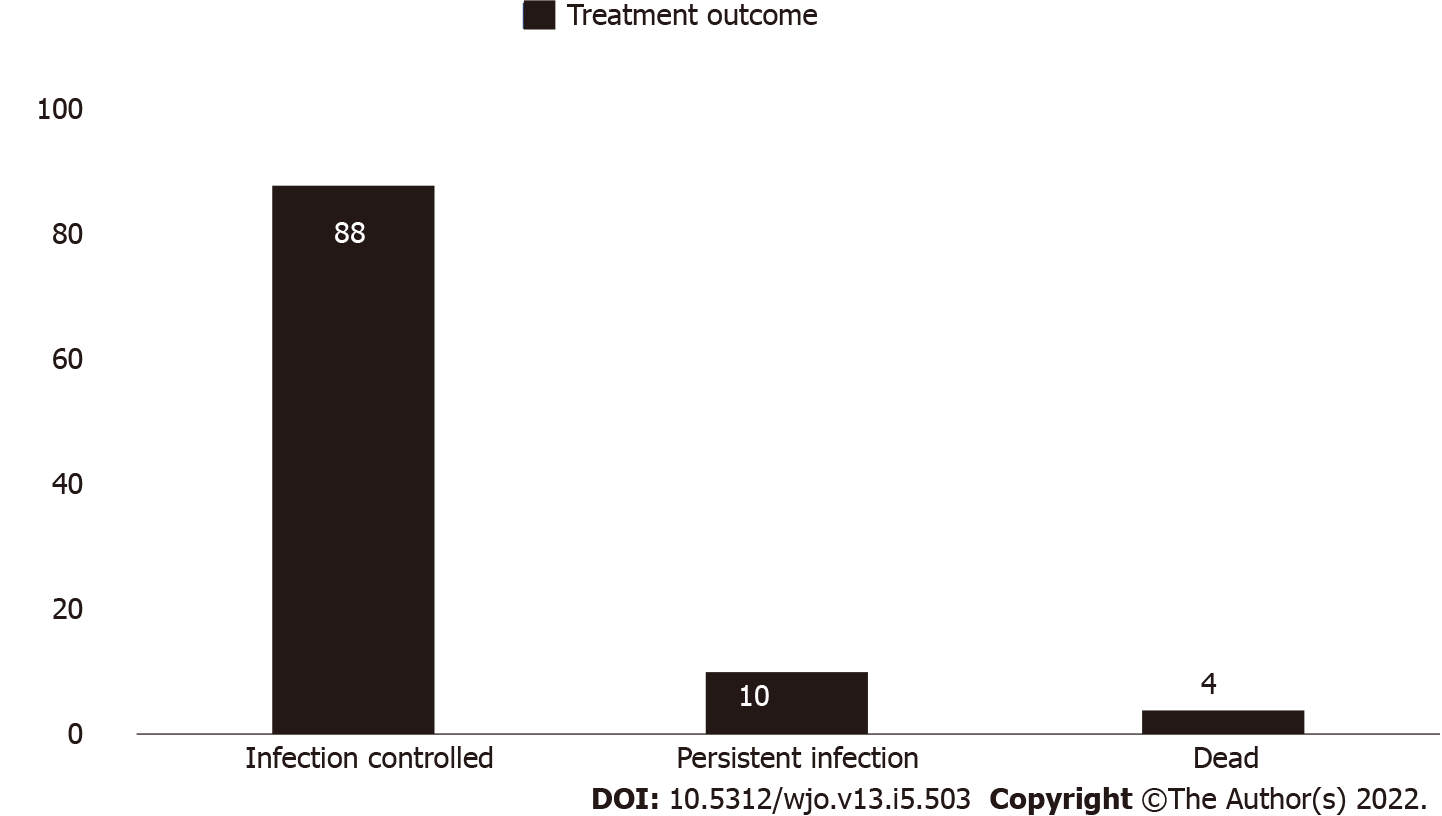 More than 150 Mycobacterium sp have been officially recognized until now, in literature which consist of tuberculous mycobacteria and NTM[56]. One of the purposes of this systematic review was to evaluate the various Mycobacteria sp that can cause hip/knee PJI, and at least 17 Mycobacterium sp were identified accordingly. They comprised of M. tuberculosis and 16 NTM. The NTM was further divided into rapidly growing and slowly growing mycobacteria[56]. Several studies have reported rapidly growing NTM as the cause of early hip/knee PJI[4,17,18,28]. Early PJI (≤ 3 mo) was noted in 36% of the NTM cases in this review, which was higher than that in tuberculous PJI cases (11%). The rapidly growing NTM hence needs to be considered as a differential diagnosis in cases of early hip/knee PJI. The diagnosis of Mycobacterium PJI is sometimes delayed, leading to delays in appropriate management[6,8]. Several treatment options were noted in this review. Removal of the prosthesis was the most commonly performed procedure, which was required in > 75% of cases. Additionally, a greater number of NTM PJI cases required removal of the prosthesis compared to the tuberculous PJI cases (88.9% vs 58.1%). There were no data regarding specific procedures, such as revision surgery, resection arthroplasty, or arthrodesis after the prosthesis removal procedure due to incomplete data in every published article. Another interesting finding was that conservative treatment with only antimicrobial therapy successfully controlled tuberculous hip/knee PJI in approximately 23% of the cases. This indicates that early recognition of sensitive antimicrobial agents is highly important in treating Mycobacterium PJI. However, the isolation of Mycobacterium with standard culture procedures may be sometimes difficult and more advanced techniques with gene sequencing are hence needed to isolate the Mycobacterium sp[19]. This could be a hindrance, especially in developing countries. Based on the pooled case analyses reported from the studies included in this systematic review, the outcome of the treatment of Mycobacterium PJI reportedly had an infection control rate of approximately 86%. Among the mycobacterial PJI cases, the infection control rate of nontuberculous PJI was comparable to that of tuberculous PJI (91.7% vs 81.4%, P = 0.092). This was comparable to that of PJI hip/knee associated with non-mycobacterial pathogens or even a negative-culture PJI that showed an infection control rate of 70%-90%[3,57]. Mycobacterium PJI has also been correlated with culture-negative PJI. A study by Palan et al[58] reported that fungi and mycobacteria are responsible for over 85% of negative-culture PJI. Arthroplasty surgeons need to consider Mycobacterium as the causal pathogen of PJI when negative culture results are obtained in clinical practice. Further diagnosis using histopathology or polymerase chain reaction assay is needed accordingly.

This study had a few limitations. First, the systematic review only included studies indexed in PubMed; therefore, some other studies may have been missed in this review. However, the wider search period (30 years) of this systematic review ensured the inclusion of several important studies from literature. Second, the studies included in this systematic review were mostly retrospective case reports or case series, which had their own limitations. It is difficult to obtain a higher level of evidence from relatively rare cases, such as those of Mycobacterium PJI. Third, some bias of treatment and outcome evaluation may have occurred, as every author may have used a different standard. This study also could not suggest any advisable best treatment for Mycobacterium PJI due to the lack of available data for evaluation. Despite these limitations, we believe that this systematic review could provide some insights into the profile of Mycobacterium hip/knee PJI, including its treatment options and outcomes.

At least 17 Mycobacterium sp can be responsible for PJI of the hip and knee. Although M. tuberculosis is the most common causal pathogen, NTM should be considered as an emerging cause of hip/knee PJI.

There were many species of Mycobacterium that may be associated as a causal pathogens for prosthetic joint infection (PJI) of the hip and knee. However, no available literature which provides compilation data regarding this issue.

This study aimed to evaluate PJI associated with Mycobacterium sp.

Among reviewed 51 articles. We found several species of Mycobacterium may be associated with hip and knee PJI.

We found at least 17 species of Mycobacterium could be responsible for hip and knee PJI.

This study may open the knowledge of various species of Myscobacterium that can be associated with hip and knee PJI.

We highly thank Denny Adriansyah, MD for his assistance in data collection and analysis.